So, it occurred to me that if I'm going to potentially get people to play the Marvel Universe Miniatures Game, I would need a second crew to demo the game. However, I'm determined to limit myself to purchasing only Avengers models (although I might pick up a few villains eventually too) so I needed to source a crew elsewhere.

Fortunately, being me, and having started a Marvel project, I happen to have suitable models lying around doing not a lot. So, a lick of paint and in some cases a re-base later and I now have an equivalent of the X-Men starter set for the game which features: Cyclops, Colossus, Wolverine and Rogue. I've played a bit fast and loose with their costumes, and I've based them to match my other Marvel project rather than the Avengers, however, this will help identify which team is which in game. 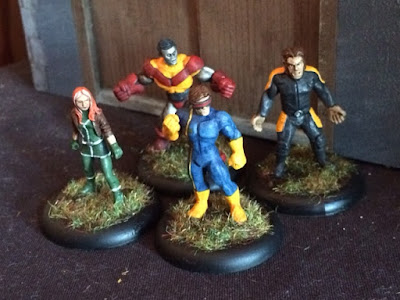 The leader of the team and able to project energy blasts from his eyes, Cyclops is the artillery of the team. The model is from Crossover Miniatures and is another one of their cleanly cast, simple models which (with optional heads) are extremely versatile. 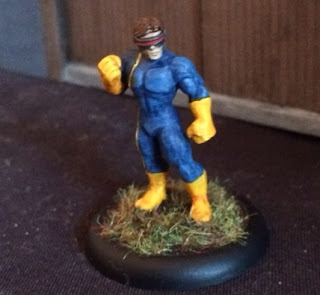 Another Crossover Miniature, long time readers of the blog will have seen this miniature before, as I've made the steel-skinned-Soviet from my Nightwing. Since I've only been playing BMG in official tournaments, my unofficial versions of characters have been seeing no table time at, given that this model suits Colossus in both size and costume, it was a sacrifice I was willing to make. I'll just have to buy another Nightwing at some point.

The yellow on Colossus is a bit orange in real life, but it still works. As ever, photos reveal things I'll need to go back and fix later, and the red is a bit patchy and needs a little work. 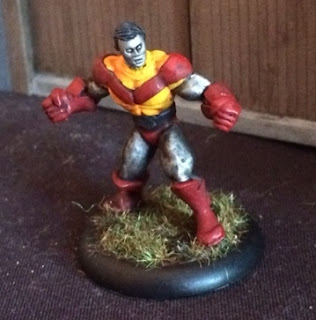 Stepping away from traditional comic costumes, this model from Nexus Miniatures is a bit more movie-like (although it also bears similarities to the character's outfit in the X-Men: Evolution animated series). You'll notice that Logan has his claws sheathed at the moment, mainly because I couldn't work out how to add them effectively. I may pick up a Heroclix model and do a hand swap at some point, but Wolverine's in stealth-mode for now.

For reference, Nexus Miniatures do several models that would coincidentally work for versions of Marvel characters, and again, the separate heads that are available should help me to fill out my X-Men in time when I can find appropriate bodies. 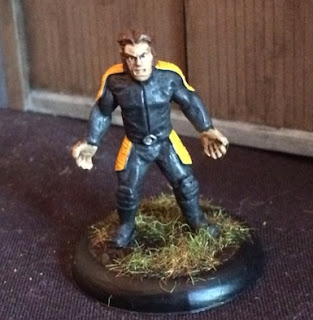 Another model getting a repaint for this team is my not-Amy Pond from Heresy Miniatures. I'd originally bought this model to use as Rogue as the leather jacket and mini-skirt form a nice composite of two of Rogue's costumes. Again, the photo reveals that I'll need to revisit the white trim a touch. 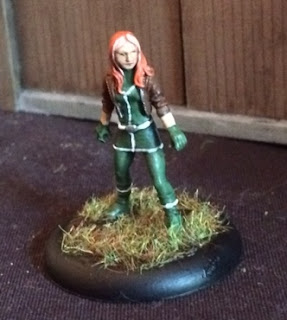 So there's my unofficial uncanny X-Men team which will work for both 7TV and demoing MUG. All I need to do now is print out the game cards for the team and I'm ready to go. I even have a lucky volunteer lined up for my first game!
Posted by Kieron at 11:19