With all the new Masters of the Universe inspired miniatures popping up, it’s easy to forget that Grenadier produced an official line of miniatures in the dim and distant past.

I recently managed to get my hands on a couple of these classic miniatures for characters that had not, at that point, had any new miniatures sculpted and were a tricky prospect to proxy: Zodac and Man-E-Faces. 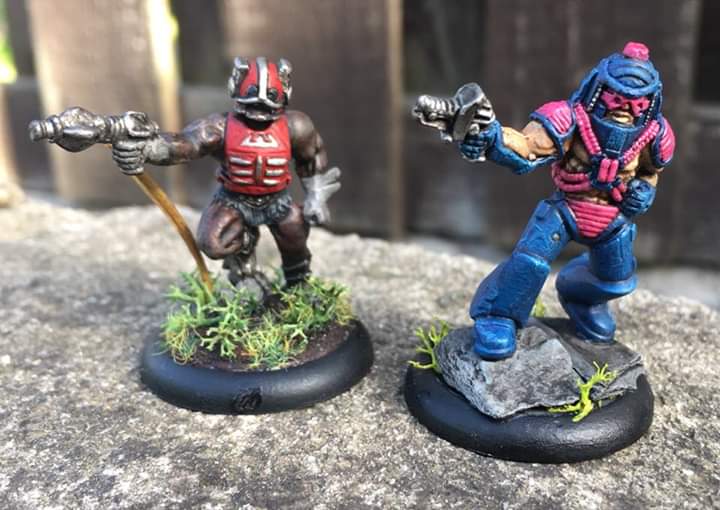 Zodac, the Cosmic Enforcer, is a solid sculpt that scales well with what I’ve done so far. The design is based on the toy and Filmation version of the character (as you’d expect from a model designed in the 80s), but I’ve decided to reflect the 2002 decision to make the character black (a decision made to introduce a bit more diversity into the cartoon).

In retrospect, I feel that the decision wasn’t the right one, as I’ve arguably made the skin tone too dark and the 80s character this model is based on was white.

I may end up ‘whitewashing’ this character as it’s bugging me.

In game terms, I’ve decided to make Zodac a star to reflect his power level, and also to discourage his use in smaller games unless it’s pretty much just him and He-Man (as his cartoon appearances tend to be). I’ve also made him neutral and not given him any genre symbols, meaning he can be on both sides (as befits the enforcer if cosmic balance), but he doesn’t open up any extras.

With the exception of his gun and one special effect, this profile is basically the Unearthly Traveller from the 7TV box, which seemed appropriate.

Even before I’d received Man-E-Faces, I knew I was going to have to do something about the legs. The design of the original model makes his legs look really short and stubby, out of proportion to the rest of the model. Also the pose was less than dynamic. 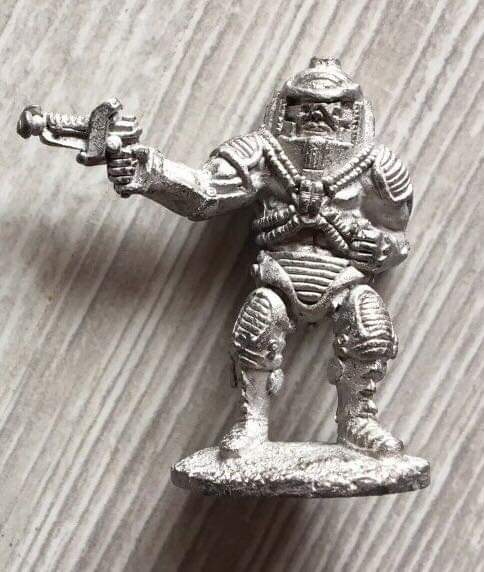 A quick dive into the bits box located, of all things, some Space Marine legs. Although not totally true to the character, they fit with the armoured look of the model and more importantly, made the whol thing seem more in proportion to my eyes. 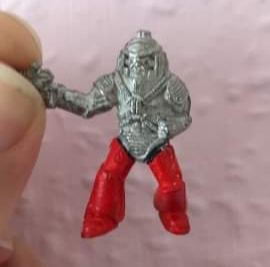 I find blue quite hard to paint well and so I’m not delighted with the armour, but I have worked hard to get to a point that I’m at least satisfied as a result. I also think I’ve learned a bit about highlighting on the way.

I went for pink as the colour of the pipes and plates (there are versions with both red and purple) to add greater contrast and brightness. He is a good guy after all.

For 7TV, Man-E-Faces is probably the character that is furthest away from any of the base game cards. Loosely it’s built on the Security Guard Commander, but I’ve designed a Star Quality which allows Man-E-Faces to move between his personalities and gain access to different abilities and attacks.

I’m happy enough with what I’ve done, but my bonfire has been a bit peed on by the announcement from Quest Miniatures that wave two of their Masters of the Universe range will actually include Man-E-Faces.

I’ll see how I feel about replacing him, when I see the final sculpts.
Posted by Kieron at 04:29