City Hall has finally confirmed what this reporter has known for several days. Police and National Guard lines have been breached and the infected are now loose in the city.

In addition to the curfew, the public are being ordered to stay in their homes until order is restored. However, given the widespread outbreaks across the country, it is not certain how long that will be.

The official advice for...wait...what's that? What's going on Phil? 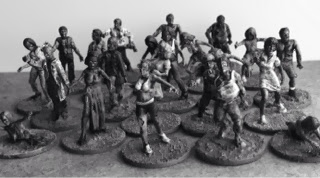 So we've come to the end of Zomtober. Due to work commitments I found myself with much less time for painting this week.

However, a decent session on Thursday saw me paint five Zombies and six Civilians in one night. I was able to get them done at speed as there were no models that I wanted to really spend a lot of time on, so I cut a few corners. 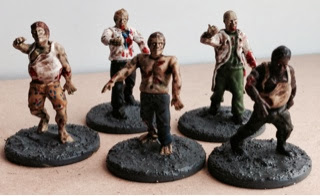 First up, the Zombies. These are the last of the men that I've got from Wargames Factory and rather than continue moaning I'll say that I'm actually quite pleased with them. These five looked awful when they were just under coated. Even the fat guys seem more in proportion.

This isn't the best picture but frm left to right there's a couch potato, a businessman, a guy in pyjamas, a medic and a survivalist. The survivalist has had a head swap from the Vixens sprue as the head he had was completely shapeless.

The Civilians are more O gauge railway scenic models and have been given a very simple paint job as their job is to get in the way and die screaming. I need some civilians to run an ATZ: Day One scenario.

And that's it. Zomtober is done. I'm really pleased with how I've done and I'd like to thank my fellow Zomtober Bloggers, especially Pulp Citizen and Brummie Thug and Rob of Four Colour Super Minis (whose idea it was), for giving me the motivation I needed to start a project that's been on a back burner for too long. I've also been given lots of ideas for future purchases based on others' blogs.

Next month is looking like Sovember as I have a load of Bolt Action Russians to paint, so I'll leave Zomtober with a couple  of images of everything I've painted this month: