In A Different League

As I mentioned last time, today I went to my second Batman Miniatures Game tournament at Titan Games in Lichfield. It's a great little venue, and I hope that little plug is enough for the guys that run the shop to excuse me for swiping a couple of pictures to use as part of this event report...such as this one: 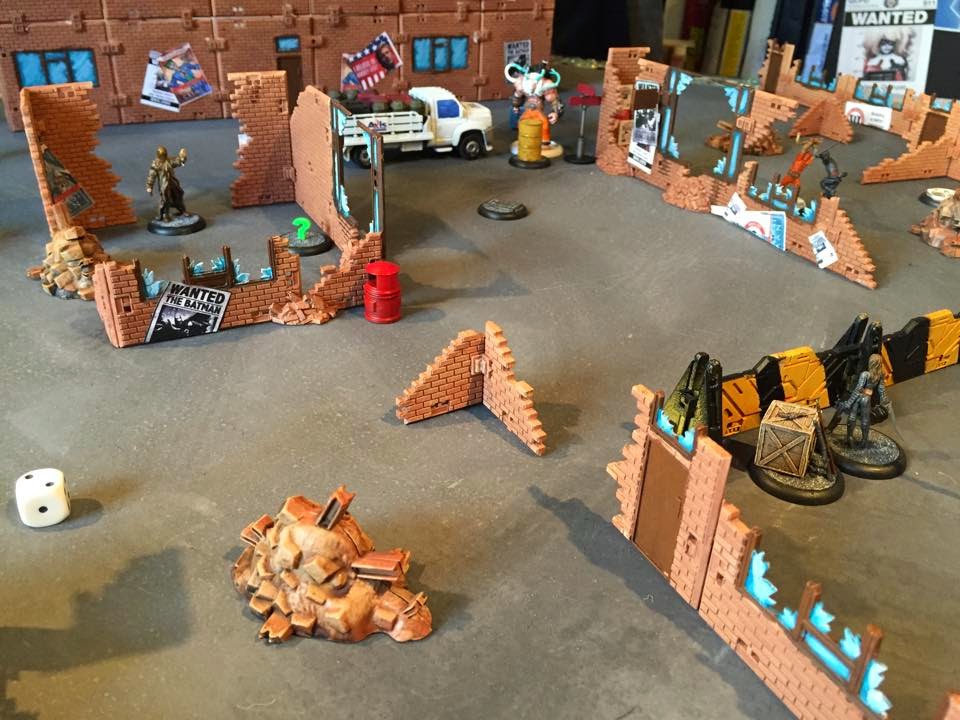 I managed to arrive in time (unlike the last event) and so had three games, all against different crew lists. For some reason, my games took a long time, and I was often one of the last to finish. I'd like to think that this was to do with having a slightly larger crew. However, it's more likely that I need to pick up the pace a bit, or be less cagey.

A discussed previously, my crew consisted of: 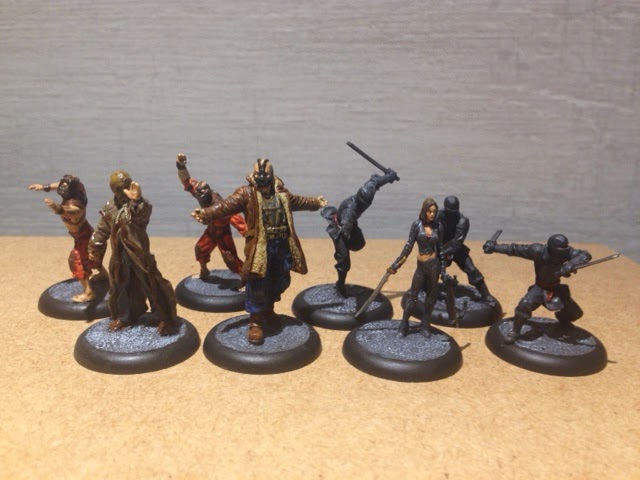 Game 1 - League of Shadows vs. Bane

My first game was against Kyle and his Bane crew. He'd only actually played a couple of games previously and had only started painting his crew earlier in the week. His crew consisted of: 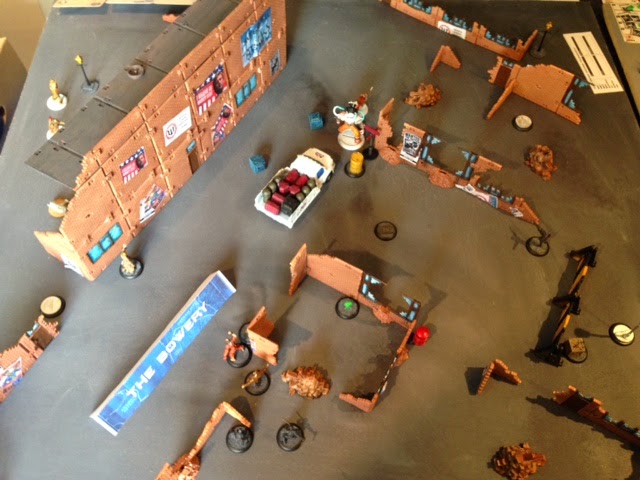 The scenario was Plunder and so the goal was to grab objectives as quickly as possible. I was aided in this not only by my 'Hidden' characters (Scarecrow and Lotus), who were able to begin racking up victory points from turn one, and the MASSIVE wall crossing part of the table and therefore protecting me from the guns of Deathstroke and Ted Hunter (the worst named character in the game) for the first few turns.

Kyle countered my rush for loot and riddles by marching Bane straight up the centre and camping him on a Titan Container for 3vp per turn. We both managed to grab our ammo objectives and so honours were fairly even until the rest of the Bane crew came round the corner. 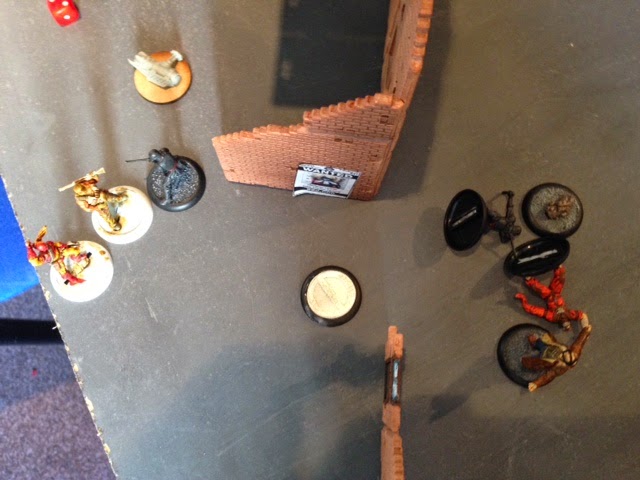 I used my Pavillion A Subject to lure Mohawk into attacking him. There then followed a series appalling luck on both sides as Mohawk failed to take down the lunatic, Bane fluffed his attacks on Mohawk, Deathstroke's shot at Bane was caught by the lunatic (using the Bodyguard trait), and Yang took down Mohawk only to be sent sprawling by Ted's shotgun. When the dust settled, Mohawk was off the table and I had two characters knocked out. 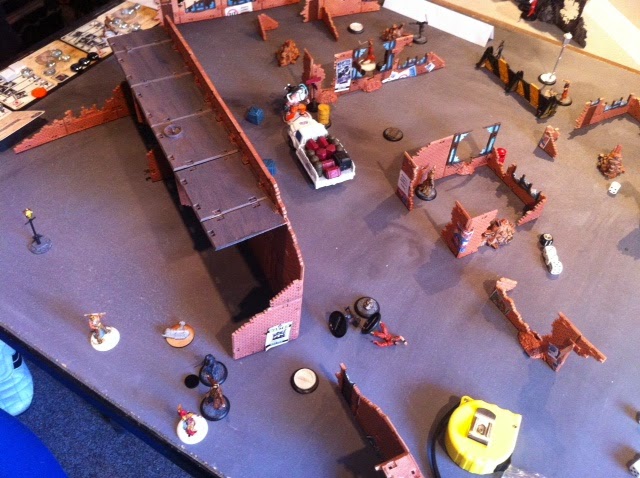 Crucially, I got first turn in the next round and Bane (keen to make up for his previous failure) rushed Deathstroke and pummelled the assassin into the ground, doing 8 stun damage in one go. Ted Hunter was forced to retreat with Ying on his trail, firing as he went. Lotus and Talia also managed to finish off the Tube Prisoner and avoid Big Bane's attacks, and when Scarecrow used Death or Exile to take Deathstroke out of the game it was all over. 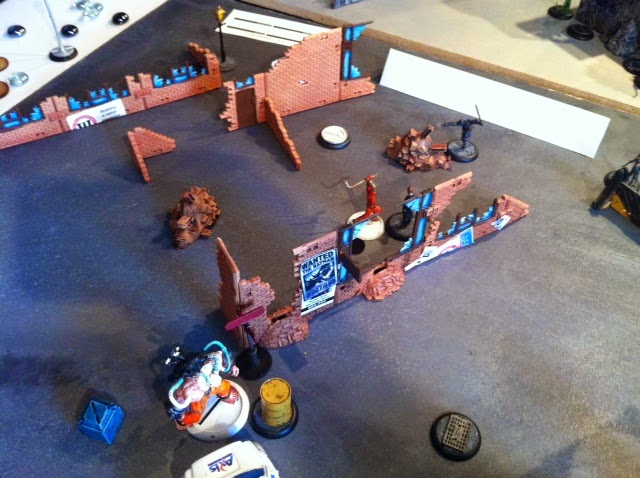 Having a henchman spare to camp on an ammo objective miles from the action, meant that I eventually had achieved a sizeable victory, although I'm under no illusions that the terrain severely helped me during the scenario.
Game 2 - League of Shadows vs. Green Arrow
If you remember, when I was putting this crew together I commented on the fact that I didn't have a lot of range or manoeuvrability. I was conscious that I didn't have a lot to counter enemy shooters or bat-claws. Shooters WITH bat-claws would be even worse.
Enter Tony's Green Arrow crew: 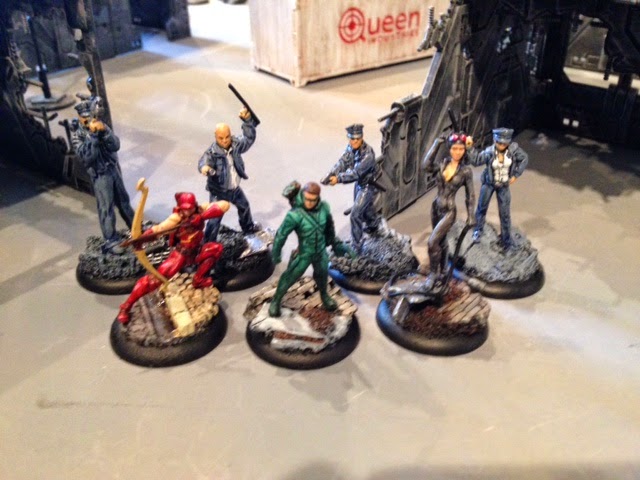 From the moment I saw this crew I knew I was in trouble. I knew that Green Arrow had the ability to get to wherever he needed to in order to be able to ignore my Stealth. To add injury to insult, the police Whistles enabled Tony to further reduce my manoeuvrability.
The scenario was Patrol, which meant that I needed to get models across the board, and I really couldn't stop Green Arrow getting into my deployment zone at the end of the game. I decided to try to grab some loot objectives, and head en masse towards the enemy. Lotus got himself into trouble and was ganged up on by all but two of the opposing gang. He was blinded, knocked down and had his loot stolen by Catwoman, but somehow, he managed to survive and lure Speedy out into a position where the rest of the gang could attack him. This was my chance to strike. 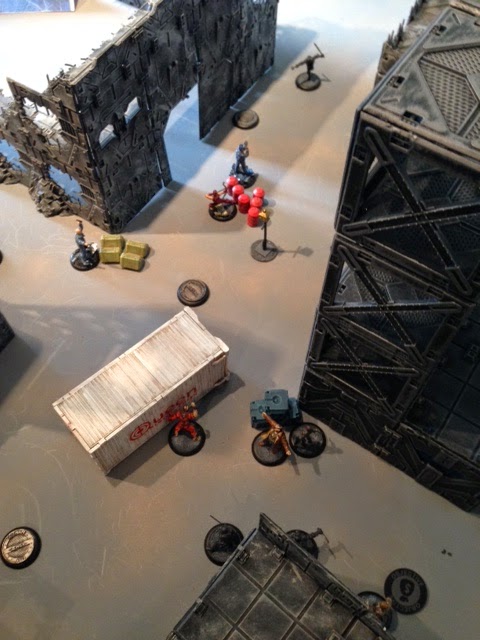 Unfortunately, I didn't get the initiative in the following round. Speedy blew up my gang with his explosive arrow and ran for cover; Green Arrow peppered Bane with arrows; Catwoman disappeared with the loot; and the cops retreated away from the remains of my crew.
﻿ 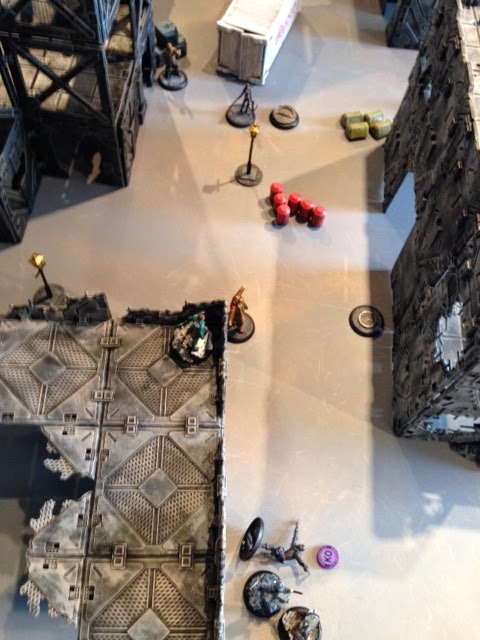 I was unable to do anything other than vainly pursue the retreating cops, picking up pitty points from passing riddles and haemorrhaging henchmen to a withering hail of gun and arrow fire. I was beaten so badly that a crowd gathered because nobody had actually seen the 70% Run Away rule come into effect before. I was spared that indignity, but it was a HEAVY defeat.
I retrospect, I still don't know what I could have done differently to win in this game. I feel that by playing fairly aggressively, I at least gave myself the chance to win. I could have limited the damage by hunkering down and playing for a draw, but that would have been no fun for anyone. Perhaps I could have split into two groups and sent one on a flank march whilst the others stayed back...but again, I suspect one of the groups would simply have been mobbed. Fundamentally, I think this was a bit of a mismatch of crews in a scenario that forced me to advance towards Tony's 'guns'. Barring ridiculous dice or massive errors from Tony, I was always going to struggle...I just didn't realise how much.
Game 3 - League of Shadows vs. Poison Ivy
My defeat in the second game was so bad that it propelled me from one of the top tables, right down towards the bottom end of the standings, where I faced Leon who writes an array of blogs that I follow, most notably for me Eclectic Gentleman Gamer, where he's recently been detailing the construction of his first crew. I was really pleased that we got the chance to play, because Leon's blogs were amongst those that inspired me to begin my Gotham project before BMG existed, also because I've been watching this crew grow over the past few months.
Leon's﻿ crew consisted of the following: This scenario was Skirmish﻿, which is essentially a straight fight with bonus points for taking down leaders and numbers. I began by running Bane, two ninjas and his bodyguard straight up the middle using the vehicles as cover from Deadshot. Lotus hadn't learned his lesson and immediately made a grab for some loot, and Scarecrow lived dangerously, running into Turk's line of fire to solve a riddle. 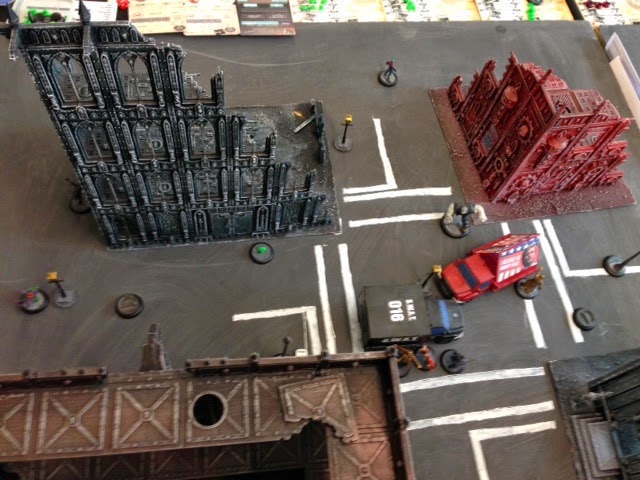 Scarecrow managed to evade Turk, but found himself too close to Grundy for comfort. A Spore Plant popped up near to Lotus, but was immediately cut down to size by Shurikens﻿ (and a cry of 'Bonsai!'). When Grundy came round the vehicles after Scarecrow, he found himself surrounded by Bane and the ninjas and hit the deck after two rounds of combat. Scarecrow had managed to haul himself to his feet and used Death or Exile just to clear the big lummox (even though it scored no victory points thanks to Immortal). 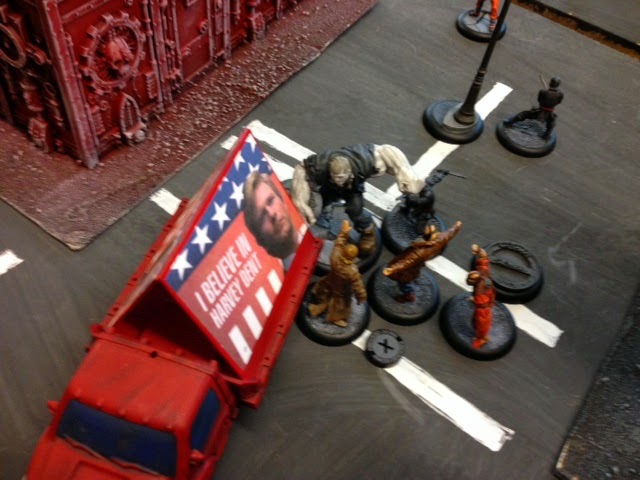 At this point, Ivy decided to pop up and make herself a nuisance, and Deadshot began sneaking shots through onto Bane (which were absorbed by his per lunatic).  Ivy managed to mind control Talia and set her against Lotus. This looked like it was going to be a major problem until Talia passed a Willpower test and Ivy was forced to flee. Lotus and Talia had chased her into a corner by the end of the game, and narrowly missed taking her down. 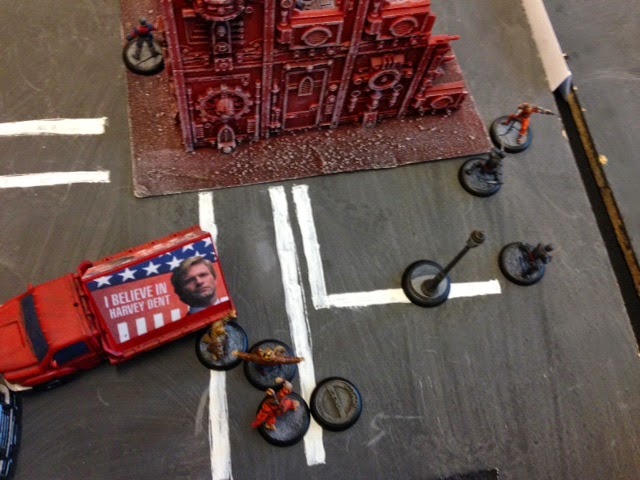 With Grundy down and Deadshot out of ammo, Leon was on the back foot. I managed to chase down Turk with Yang, but I foolishly let the Pavillion B Subject get taken out by the plant. Despite Scarecrow solving another riddle in the last turn, it would up 12-7 to me, a five point difference, which is technically a draw.

This was a cagey affair, where he was trying to avoid getting too close, whilst I was carefully avoiding being shot on what was actually quite an open table.

Being on the bottom rung of the ladder, Leon and I ended up bringing up the rear of the tournament. I'm still quite impressed that my defeat in game two was so bad that it cancelled out my earlier victory as I'm sure there must have been people who lost more than I did.

Overall, I quite enjoyed playing the League but this crew was severely lacking the ability to dictate the play or my opponents' tactics. When an opponent came towards me Bane, backed by ninjas (with Scarecrow on clean-up) was more that enough to cope with some of the game's biggest hitters (Deathstroke and Grundy). However, I really struggled when my opponent became more evasive, and even Ivy was able to slip through my fingers. Going forward, I probably need to add some proper shooting to the crew as Talia's crossbow, although not awful, is not enough to counter enemy fire and put off rooftop shenanigans.

However, once again, this was a great day's gaming, and a win, a draw and a LOSS, is a pretty fair outcome for the day. I had three great games, against three different crews run by three great opponents. It's also proved a timely reminder of the rules as I'm demoing the game tomorrow and there was a fair amount I'd forgotten.
Posted by Kieron at 17:15