Stepping on the Gas

The last time I put paint on a model was just after Christmas. I've been struggling with motivation.

I've also been accutely aware that I said I'd continue to set targets. However I've not known what to work on.

This has now changed!

I've signed up for another Batman tournament in March and I want to take my fully fledged Joker crew out for a spin. I can already field 350 rep if I use free agents and Blackgates, but I've figured that this is a good way to get back into target driven painting.

So, my goal for what remains of January is to complete the Joker crew models I own that remain unpainted.

These include:
- 2 Joker Gas Cannister Objectives
- Titan Joker
- Titan Clown
- Ringmaster (being converted into something else)

First up, the Gas Objectives. 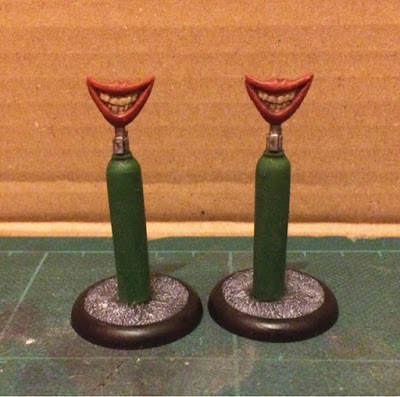 I've kept the work on these simple to ease myself in and score an easy win. I could have put something on the side of the canisters, and I may yet add that later, but they'll do go now.

In game these are great for weakening opponents early as models within 10cm need to test to avoid taking damage. They're not so good against enemy elites, and Joker's men can also take damage, but at the very least, they should force my opponents to spread out, making them easier to pick off.

So, first bit done. On to the big boys.