The monotony has been broken and I'm enthused about painting again! Hurrah! A combination of taking a break from the Bretonnians, having the opportunity to paint models more individually and having set myself a challenging deadline has got me moving again and I've already 'finished' a unit of Viking Bondi, the first point of the six point Viking warband I need for the tournament in November. 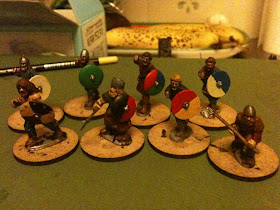 I say 'finished', but you may have noticed that some of them are lacking weapons and the bases aren't done. I'm planning on doing all the bases at the same time once I've finished in order to get them consistent. As for the spears; after a bit of fiddling about I realised that the spears I have are not only too fat for the models' hands, but also they're a bit bendy. So, I need to get my hands on some brass spears to complete the unit.

The good news is that this unit is one of the two larger units I'm doing for the warband, and so represent a sizeable dint in the lead pile for this month. On top of that, if you look closely at the guy on the left, you'll see that my warband is packing the Viking version of Barry Gibb!

I've also bought and read the Saga rulebook. The rules are easy to comprehend but seem to have some real tactical depth for a skirmish game. I'm looking forward to getting my first game in a few weeks from now.
Kieron at 13:41
Share