This week saw me giving Mantic Games' not-at-all-like-Warhammer fantasy battle game, Kings of War, a test drive with Pete. We were using Version 2 of the rules, which is available for free download on the Mantic site. They have recently brought out a hardback version 3, but we were investigating whether the basic system was something worth playing as Pete has recently hit the GW price-wall, other club members have been muttering about trying it and I'm always on the look out for ways to get more value out of models I already own.

As a side note, I should point out that I will be constantly comparing KoW with WFB throughout this report, as I feel this is the best way to communicate my experience of the game.

I decided to break out my old Vampire Counts army (some of which I've had for twenty five years) and use the Undead army list for KoW (also available for free download). Creating an army is easy as units are of fixed sizes and have fewer unit options than WFB, so there's less fiddly adding up (and therefore less likelihood of error). However there is a healthy range of unit types available, and using the models I had I was able to construct the following 1500 point list:

I didn't notice at the time, but a 1500 point army in KoW contains roughly the same number of models as a 2000 point WFB army.  I eventually noticed the larger army sizes when Pete deployed his Dwarf army and it stretched across the whole table! 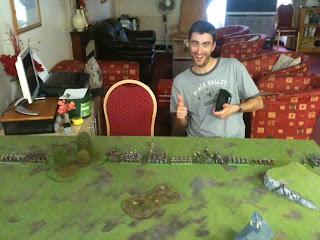 The scenario we rolled up was 'Pillage' which meant claiming objectives; we rolled up three and so named the two hills on the flanks and the marsh in the centre as these. We would have to claim at least two and contest the last objective to win the game. I had intended to use my Skeletons and Zombies as an anvil, and sweep my Cavalry and faster moving Troops around the flanks. However, as Pete had no flanks I figured, I would just have to punch through the flanks and descend on the centre and so set up as I had planned anyway: the Revenants and a Necromancer were on my left; the Infantry and other Heroes were in the centre; and the Werewolves and Wraiths were on the right.

Across the table from me, Pete set up a solid line of Dwarfs. Facing my cavalry were two Troops and a Regiment of close combat Dwarfs. To the right of his centre were a couple more Regiments and an Organ Gun and his left centre had a battery of War Engines, Crossbowmen and Handgunners. On his left, he had his General and a Regiment of 'Not-Ironbreakers'. 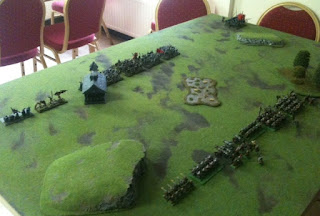 The game plays in Igo-Ugo turns with all the dice rolling in a turn being done by the active player. Movement is done in pivots, advances, charges and marches and there are rolls to hit and damage in both kinds of combat. All in all, rather familiar stuff. Things differ from WFB when you look at spells (a very limited selection) being treated as ranged weapons, no model removal, and combat being resolved in Nerve tests (if you break you're gone for good) not casualties. The game is very streamlined and so easy to pick up. This was our first game but there was less checking of the (30 page) rulebook than in most games of WFB I play.

On my left, I was aware that being outnumbered meant that my elite Revenant Cavalry might be easily flanked by the Dwarfs (being flanked is BAD!) and so I advanced cautiously, and given that there was no danger of her being sniped, the supporting Necromancer popped out to hit one of the Dwarf Troops with a Zap spell. The damage inflicted combined with a very high Nerve roll saw the Dwarfs run for the hills. A good start, however, no panic rules meant that there was no chance of the flank collapsing from a lucky shot.

Slightly stunned the Dwarfs can on towards the hill. Pete didn't set up the flanking trap I was expecting and so I took the opportunity of using my superior movement to charge his Troop of 'Bulwarkers'. Here's where I got a surprise. It's actually quite difficult to smash fresh units from the front in KoW and despite hitting hard, my Cavalry were repulsed and counter charged. My Necromancer was able to heal some of the damage inflicted and the Bulwarkers were broken just in time for me to turn the Revenants to avoid being flanked. 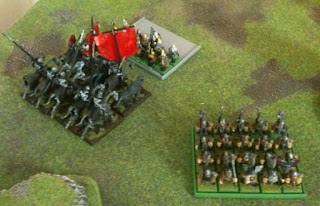 The last Dwarf Regiment charged in, but the Undead ability to mitigate prior damage (both with Heal spells and their Evil Dead rule) meant that they were still in good shape and so another round of charge and counter charge kicked off.  The hard hitting Revenant Cavalry wore the Dwarfs down and broke them, securing one of the objectives but were too far from the action to take part in the rest of the game.  Overall, I like the combat mechanic. It's fast, fluid and logical (especially the slow wearing down of a unit's resolve).

On my right, I launched the Wraiths and Werewolves forwards. I was a little tentative as to what I should do with them and they both took shooting damage. I knew that neither would be able to take on the 'not Ironbreakers' and so I sent the Wraiths up the hill, aiming to fly off the cliff and attack the flank of some Handgunners. The Werewolves were slower to attack (the damage they took caused them to waiver - which essentially means miss a turn) but I sent them rushing into the front of another unit of Handgunners. Again fresh units proved hard to break. The Werewolves were repulsed and then shot to pieces, whilst the Wraiths were pushed back up the hill and charged in the rear by the Dwarf elites. Both units were destroyed and the Dwarfs secured the big hill. 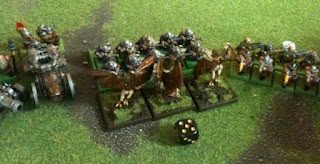 Here's where we encountered our only major gripe with the game. The scenario called for a player to win by two clear objective, but from about turn three it became apparent that were were both going to secure a flank each and not be able to do anything about the other one. This meant that for the second half of the game we knew that the game would end as a draw. However, things would have been much more exciting if you just had to win by one objective - time for a houserule methinks.

In the centre, I advanced straight onto the marsh, securing the third objective, However, not only did this slow my advance down even more, but it also became clear that Pete had no intention of coming to meet me and was happy to blow the crap out of my units from range.  Even though regiments are quite resilient and I could heal some of the damage, the devastating bombardment from Cannons, Handguns, Crossbows, an Organ Gun and a Flame Cannon took their toll and I lost one unit of Skeletons and took damage on the others. They only thing that helped mitigate this was the Wraiths and Werewolves running interference. 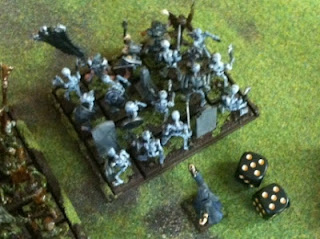 It became clear that if I sat tight, Pete would pick off my units one by one. So I charged out of the swamp. The Zombies charged the Crossbows, and bounced. The remaining Skeleton Regiment charged the Organ Gun, bounced, was flanked and then destroyed. Despite the Zombies smashing the Crossbows on the second attempt, another Dwarven volley smashed them too. I was left with a single Skeleton Regiment with Spears, a Vampire Lord and Necromancer to hold the marsh. 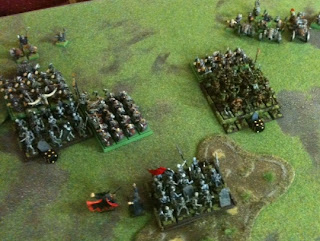 I realised that there was only one or two turns left and so I charged the Vampire and the Skeletons into the most advance unit of Dwarfs. It turns out that Heroes really tip the balance, and for the first time in the game I broke a unit on the charge. I also ensured that Pete would not be able to destroy all my remaining forces and so even though he charged the Vampire with Regiment of Dwarfs (the Vampire held), he was unable to prevent me from holding the objective at the end of the game. 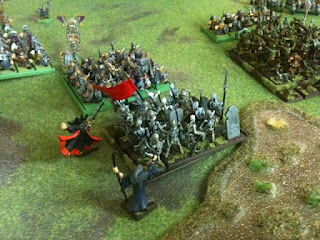 With the game over, I held more objectives, but Pete had destroyed more of my army. A draw (although we knew that three turns ago).

Kings of War turns out to be a good substitute for WFB and the game certainly played out like many a Dwarf/Vampire match up I've played before. It's certainly simpler and less convoluted (there aren't the 'rules that ignore the rules' issues) and seems a much more accessible entry point to wargaming, although it doesn't seem to lack tactical complexity. The basing rules encourage creative 'diorama' units and combined with free PDF rules this means that cost is somewhat reduced (although the larger armies may counteract this).
The army lists, magic and 'fluff' are all a little bland for my tastes, although the new hardback version is likely to address this to some extent (the game needs more big gribblies). Also, the game needs better scenarios to really add some variety. For me, if you own, play and like WFB, then I don't think that Kings of War really offers anything particularly new or exciting. However, if your trying to introduce new people to Wargaming or tempt historical players (or those who have lost patience with GW) over to the 'dark-side' of fantasy gaming, then I believe that Kings of War is a much better prospect.

I've already mentioned that the fixed unit footprints of Kings of War means that you can be a bit more creative and make 'diorama' units. Not only will these be interesting to look at, not to mention fun to make, but they will also likely require less models than the 'official' amount. Add in the free rules, army lists that closely resemble GW ones (and so you can use your old WFB models easily), along with the plastic models that are cheaper than GW, this makes Mantic a Cheaphammer friendly company, no matter what army you choose.

So, what's so special about the Kingdoms of Men list?

Well, the Kingdoms of Men is quite a versatile little list, lots of options with very little restriction. I has quite a lot of variations which will allow you to use to mimic pretty much any time period pre-1900.  This not only allows you to use armies you already own, but means that you can utilise other companies' cheap plastics with ease; Perry Wars of the Roses, Warlord Celts, Gripping Beast Viking, etc. Just looking through my own armies I came up with the following:

As you first begin to play Kings of War, use the models you have and the Kingdoms of Men list to get started for FREE! Also, as Mantic don't currently manufacture any human models, nobody can tell you that you're wrong. The models are human, and are armed appropriately, what's the problem?

Personally, I plan to get a Greek looking chap on a Pegasus and some Minotaurs (to use a Ogres) to add a fantasy element to my Greeks.

The Kingdoms of Men list can be found HERE.

This week will see me getting my first taste of Muskets & Tomahawks against Kev. We'll be using Kev's American War of Tax Avoidance Independence miniatures, so the eye-candy will be monumentally better than usual (I might even break out a proper camera!). I'll also be racing to finish the basing on my settlers so that they can be used should we need them.
Posted by Kieron at 14:56