After a long hiatus in the ongoing struggle for the fate of South Yorkshire, the Wortley Royalists once again tangled with the Handsworth Militia over control of the villages surrounding Sheffield. A B.U.F. armoured column was despatched to eject the socialists from a small farm and secure the produce for the royal cause. 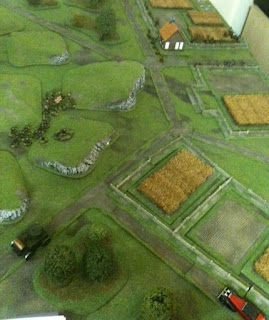 The Handsworth Militia were dug in around the property boundaries of the farm. They included several squads of well armed militiamen bristling with Lewis guns, a field gun, ex-army sharpshooter Jeff Thompson, and the firebrand Reverend Chisholm. 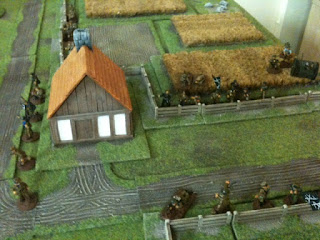 With the Handsworth men dug in, the Captain Granville Cadd led the B.U.F. and Wortley infantry through the hills toward the farm, whilst heroine of the Right, Heather Brown and the motor platoon took the road... 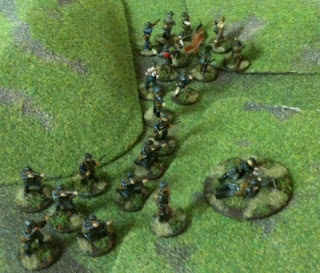 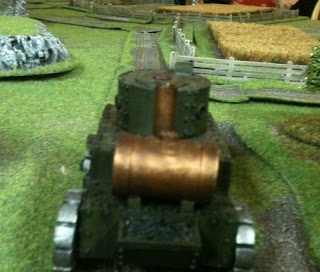 The royalists advanced on all fronts, with the Vickers machine gun mounted on the tank inflicting heavy casualties on the entrenched rebels. 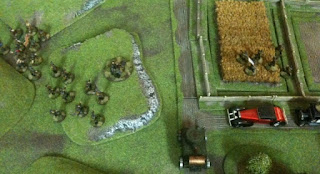 A smattering of ineffectual return fire pattered off the armoured hull and the Handsworth artillery realised that they had insufficient ammunition. Seeking to do something the halt the fascist advance, Lieutenant Arthur 'Spongy' Wiggins led a small machine gun detachment out to sweep the hills clear of the enemy. 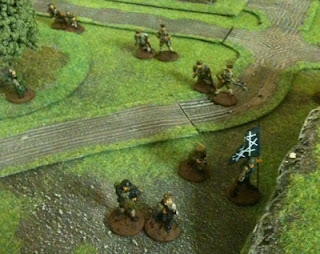 However, Wiggins men stumbled into a killing zone, and although they returned fire, all but a handful were cut down by the ruthless supporters of Edward. 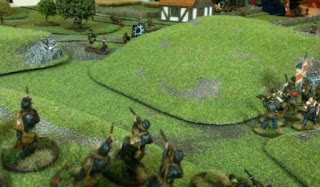 Meanwhile, the motorised attack faltered as the fascists experienced fuel shortages and both their vehicles were stranded, leaving the motor platoon unable to support the assault of the tank... 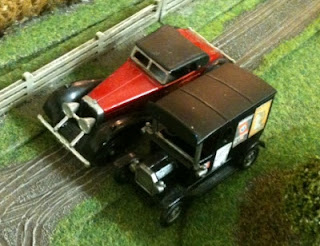 ...which had roared off into the distance, clanking and hissing. In a desperate move, Reverend Chisholm and Captain Bamford, with fire support from Jeff Thompson, launched a suicide assault in an attempt to get to the tank's vulnerable rear. 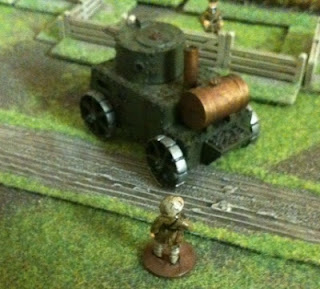 Although it cost Bamford his life, the assault was successful, and the tank went up in flames. The royalists were forced to withdraw, although the significant casualties that they had inflicted meant that the Handsworth men would not be celebrating. 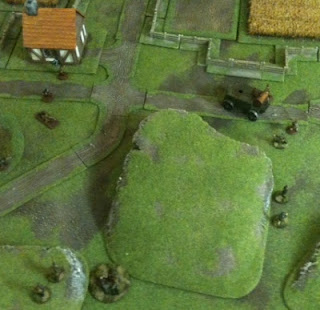 We played the game using Matt's conversion of Mantic's Warpath beta rules and I have to say that this was may favourite game of VBCW yet. The fast flowing rules played well with a setting that is not meant to be too serious and the alternate activations makes for a more tense experience that the typical igougo format of the GW stable. I still need to work out how to use the tank effectively, because despite its power, it's still vulnerable. Until the tank blew I was in control and about to mow down the remaining socialists and claim the farm.