What Is A Crocodile's Favourite Game?

Time for a couple of new Batman villains. 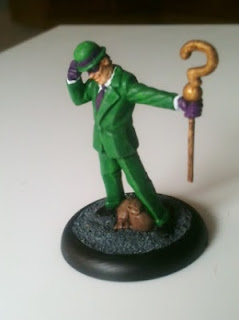 First up, the Prince of Puzzles, the Count of Conundrums, the Mystery Man, Mr E, Edward Nigman, the Riddler! This is a Heroclix sculpt and is actually the model that persuaded me to use Heroclix miniatures in a slightly larger scale before I'd heard of Knight Models. I like the characterful simplicity of the pose and it was really a doddle to paint. I did have to replace a wonky cane, but other than that the Riddler wasn't at all confusing. 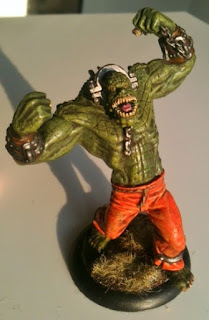 Secondly, Waylon Jones, the Killer Croc. This is a Knight Models sculpt and as it's based on the humongous Arkham City version of the character and so towers over the other models I've done. This model was an absolute joy to paint. For me it strikes exactly the right balance of detail that improves my painting without having unnecessarily complex fiddly bits to deal with. This big fella has sold me on buying into the rest of the range for sculpts that I don't already have; despite the price.
Posted by Kieron at 13:09 10 comments:

Last week, I finally got involved in our Firestorm: Lorraine campaign. So far, Matt and Pete have won one game each leading to the Americans crossing the Moselle and cutting off the Panzers in Luxembourg. I entered the fray by arranging a game with Pete, which meant that I would be commanding the Americans as Panzer Pete tried to break out of the encirclement around Luxembourg (I managed to lose the initiative roll). The scenario was 'Surrounded', and I imagine that the Germans had launched a series of encircling manoeuvres to destroy the Americans around Mairy (Pete spotted the chance to breach the US line and cut off the Tank Destroyers across the Moselle. 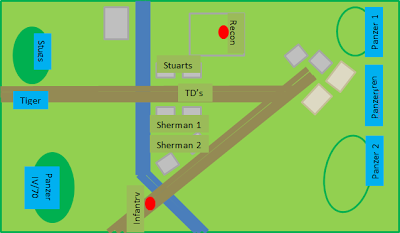 I deployed my tanks within the town, trying to hide from the inevitable German long range barrage. The infantry platoon dug in out on a limb to guard the objective beyond the river, whilst the recon platoon cowered behind the stone wall of the field guarding the other. Pete massed his Panzer III's, Panzer IV's and Panzergrenadiers to the east. whilst the big guns were lurking in the woods to the west. 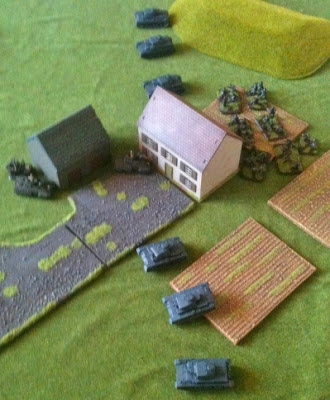 Did You See Anything?
The tank destroyer security section use their recce move to scout out the farm just in time to get eyes on a wall of German steel rolling towards the town. 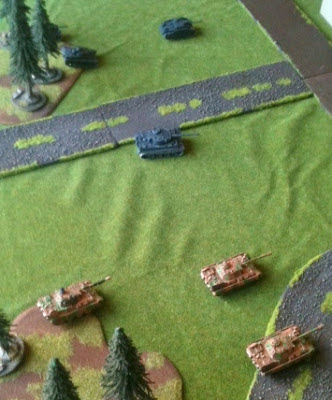 Not So Clever Hans
The Panzer IV/70's (played by Panthers), the Stugs and the Tiger roll out of the woods but suffer a bout of failed bogging checks. 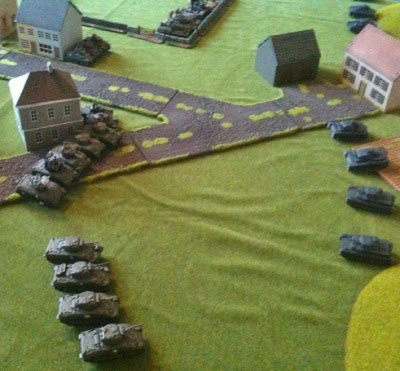 What Would Patton Do?
With the big guns stalled, I take the chance to launch a massive attack on the weaker German tanks. The Tank Destroyers appear to support the Recon platoon whilst the Shermans and Stuarts decimate Panzer platoon 2.

Shootout!
My 1iC takes the opportunity to destroy the isolated Stug.

Incoming!
Despite the clear skies, the USAF begin what will be an underwhelming performance as they miss the Tiger. 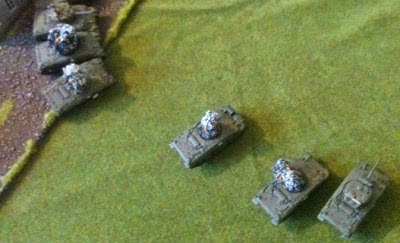 Watch Your Six!
Having gone all out to destroy the Panzers coming from the east, I left my tanks exposed to attack from the rear from the long range guns of the Panzer IV/70's and it cost me a platoon. 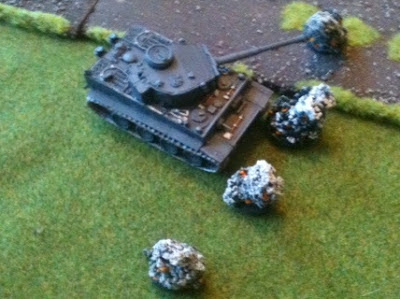 Smoke Gets In Your Eyes
In a delaying tactic, I pour smoke at the incoming Tiger to reduce its effectiveness. 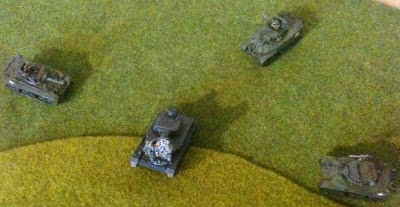 Speed vs. Strength
I launch the Stuarts at the remaining German tank, the 2IC. Whilst the Shermans and the M10's  move back to defend the bridges from the big guns. 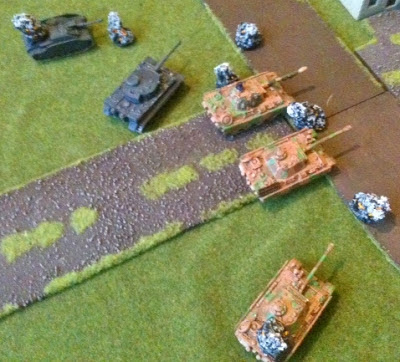 Hold Them!
Unable to hurt the German tanks to the front (save for the M10's, which were fluffing), I resort to smoke to hold them. However, worried about their flanks, the Panzers don't push through the smoke. Eventually the M10's find their range and the Panzer IV/0's are broken. 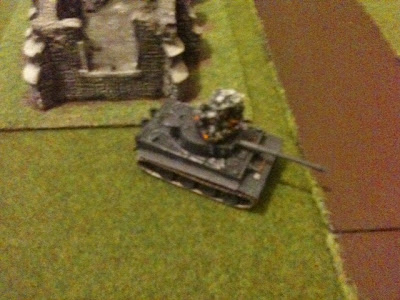 Endangered Species
With the destruction of the Tiger, without their commander, the Germans are forced to retire. The breakout from Luxembourg had failed. 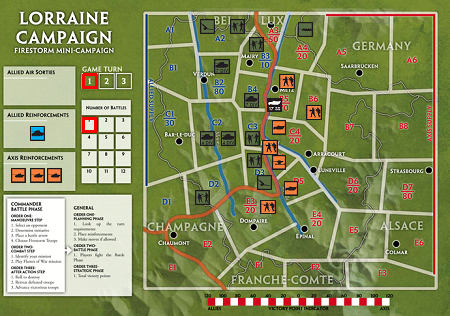 The German Panzer firestorm troops were captured on the retreat, leaving Luxembourg looking vulnerable. However, the important fact from the game was me learning that my peashooter armed M4A1's and Stuarts can beat German tanks if I use their speed and mass their firepower. I'll admit I still need to paint some of my own M10's but I was able to use speed and terrain to beat stronger tanks.
Posted by Kieron at 14:44 No comments:

I've finally got some more painting done, and given my recent positive experience with the Batman Miniatures Game, I've been inspired to add to my roster of heroes and villains. 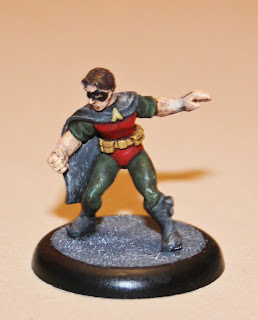 First up is Batman's sidekick (who somewhat ironically, isn't a 'sidekick' in BMG) Robin, the Boy Wonder. This model is 'The Kid' from Crossover Miniatures, a small company I feel the need to support despite the noticeable difference in scale from the miniatures I'm using (Robin, being a teen of indeterminate age, neatly avoids this issue). Although not an officially licensed product, the miniature bears a striking resemblance to the 1990's incarnation of Robin, Tim Drake, and is significantly different from (and in my view more dynamic than) the official Knight Models' Robin, which is based on the Arkham City Robin, as welll as being significantly cheaper.

As with my previous experience with Crossover Miniatures, this model was a pleasure to paint with little to no flash to clean - although the chunky base did need chopping off. I've still got to work up the courage to a add the 'R' badge to the front, and I'm unsure as to what to do with the base at the moment. Overall, I'm really happy with him and I'll continue to scrutinise the Crossover Range for models I can use as part of my project. 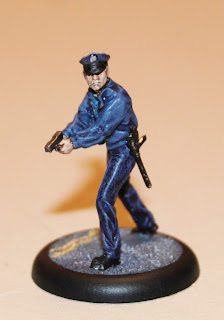 Next up, Agent Ron, the second of my Gotham Cops from Knight Models. I really like this sculpt and he marks my first ever use of liquid greenstuff on the arms; an experiment which I'm very happy with (you can still see the join on the arm if you look closely enough, but it's not enough to worry me). This guy is a Henchman like the officer with the baton, although unlike him, Agent Ron is unique and so cannot be used more than once in a 'gang', which seems an odd marketing decision, because by making only one of the models in a pack reusable, they have potentially discouraged people from buying more than one pack of Cops.

I'm happy with how I've managed to match the previous Policeman's paint scheme and I've kept the base simple with some road markings (which I have no idea whether they are accurate for the States). Like the last Policeman, I'm still wimping out of adding 'GPD' to the back of their jackets as I don't want to stuff them up. 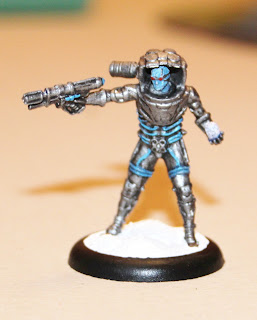 The last new model for now is Mr. Freeze, a.k.a. Victor Friess (seriously...) from Knight Models. I've kept the paint job simple on this as I found that this sculpt lack some of the definition that I'm used to (especially in the face) and which provide a crutch for my method of painting. The gun is also incredibly flimsy and I'm concerned that it will break unless I'm incredibly careful when using him. This follows on from my experience of breaking the baton on the first Policeman I painted and seems to indicate that the thinner parts of Knight Models sculpts will all be fragile.

I'm generally happy with Mr. Freeze, although I feel that the head lacks any real character and the close up photo badly exposes this. However, I don't know what to do about this. I am very happy with the snow globe though, and if you look closely you might be able to make out the flakes of snow effect I went for. I deliberated a long time about his base and eventually went for a snow drift effect. At the moment this is uneven sand painted flat white. I avoided using snow basing effects as I've never really liked how they end up looking (a bit like cake icing) and although I'm okay with the base, I'll happily take suggestions on potential improvements.

At this point in proceedings I thought I'd add some group shots to show the progress I've made so far.

This is my Batman gang, featuring the big guy himself, Nightwing, Robin, Agent Ron, Generic Cop, and the Detective who theoretically could easily use the same stats as Generic Cop. This is a fully functioning and game legal gang of 330 Reputation (or 340 if I use Arkham City Batman instead of Dark Knight Rises). They are due to be reinforced by Commisioner Gordon, a Heroclix sculpt currently sitting on on the painting table. 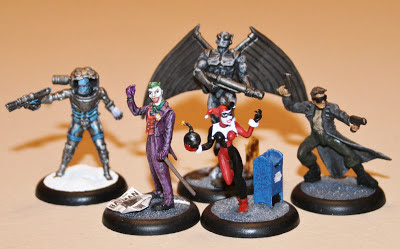 To counter them are the villains: Joker, Harley Quinn, Mr. Freeze, Firefly and Turk. Unlike the Batman Gang, Joker's mob are short on numbers, especially as without game stats, I can't use Firefly at the moment and so can only muster 251 Reputation. These guys are due for reinforcement in the form of three Free Agents: Killer Croc, the Riddler and Scarecrow. Although I wouldn't be able to use all of them at the same time, flexibility should allow for some variation and interest in games. However, it is clear that Mr. J, needs some proper henchmen and so some clowns are likely to be the next purchase from Knight Models.

All in all, I'm now in a position to be able to play BMG with decent sized gangs. I still have my reservations about the scenarios, however, my bigger concern is my own terrain (most of what you saw in the battle report was Matt's) so I need to get cracking on that. After that, I will be turning my attentions to some additional villain gangs: specifically the Penguin and the League of Shadows...
Posted by Kieron at 13:48 3 comments:

Firestorm: Lorraine - Across the Moselle

The second game of our Firestorm: Lorraine took place a couple of weeks ago, and I'm only just getting caught up. Again Matt's Americans attacked Pete's Germans across the Moselle just north of Metz, seeking to cut off the Panzers in Luxembourg and again he was supported from the air. Again Pete's Firestorm troops were infantry of variable quality, but instead of my Panthers, Pete's heavy tanks came in the form of two Tigers.

However, this time Matt made three important changes. Firstly, the Firestorm troops he chose to support his assault were his newly painted Towed Tank Destroyers. Secondly, his army featured Sherman 76mm tanks, which are more capable of going toe to toe with the German tanks. Finally, realising that they weren't cheesy enough last time, Matt actually looked up the correct anti-tank score for his M10 Tank Destroyers.

Needless to say, these change spelt doom for Oberst Pete von Treadhead and the Americans managed to cut off the Panzers to the north. Luxembourg appears to be General Matton's next targets if he can keep the initiative and given the rules on only Panzers attacking for the Germans, the Panzers are going to have to cut their own way out of there should the Germans manage to seize the strategic advantage.