You often come across discussions about how people got into this hobby and people often talk about being introduced to a particular game, being bought a few miniatures or encountering a particular form of media.
For me it was none of these things. My introduction to wargaming came long before I knew Games Workshop existed, before I'd turned the first pages of The Lord of the Rings, before I'd been to my first wargames show and spent my pocket money on 20 15mm fantasy figures from The Tin Soldier.
My introduction came from these... 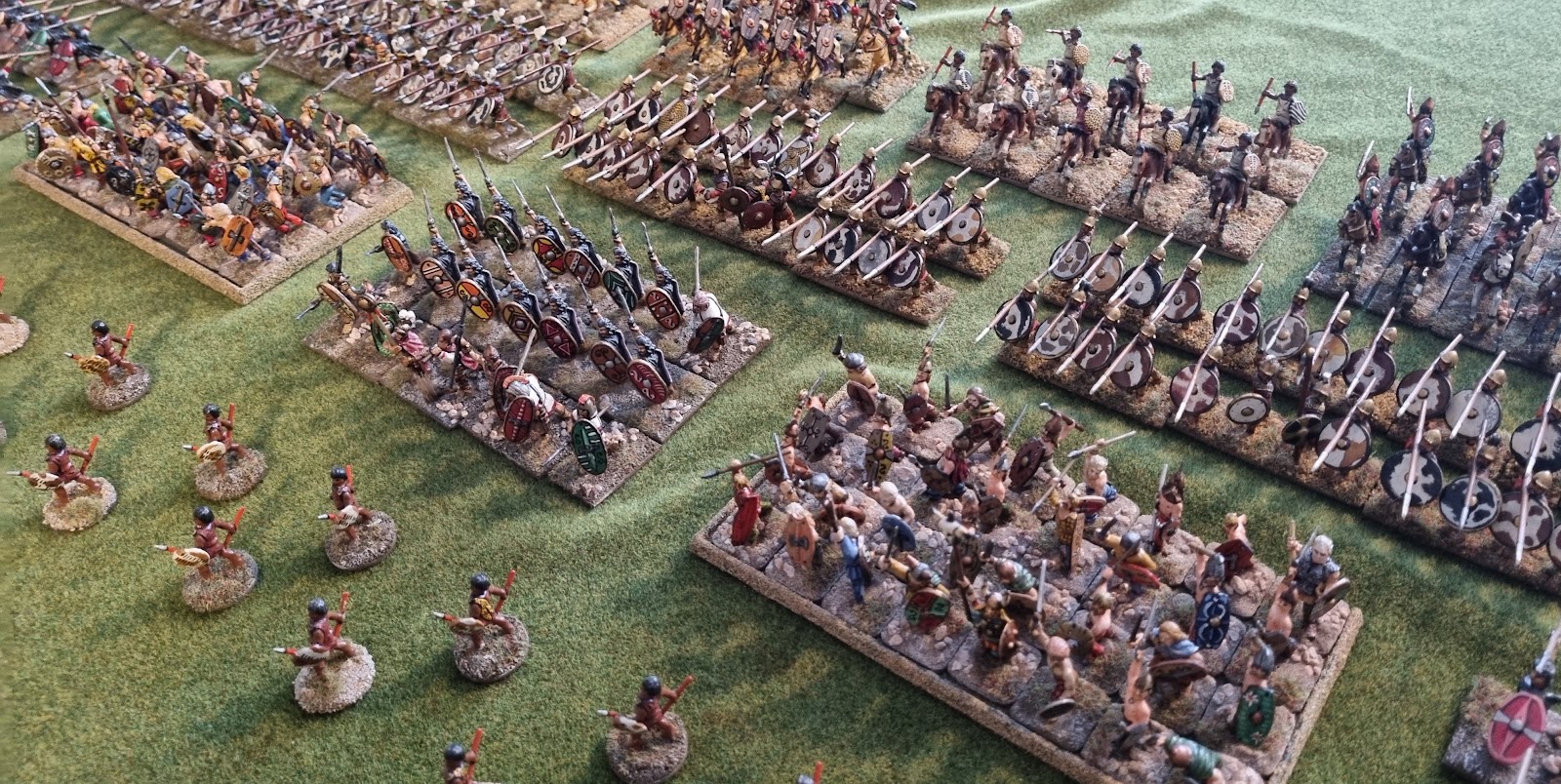 For as long as I've been alive, there was a cabinet of miniatures in my parents' house full of miniatures painted by my dad.
I remember sitting quietly at the table watching him paint, captivated. I would stare longingly at the shelves of miniatures wanting to play with them, sneaking a couple out when I thought I could get away with it.
It was my dad who took me to my first shows, and introduced me to the labyrinthine complexity that were Wargames Research Group rules (what the f*** is a 'bound?) and who let me 'command' a unit of Prussian Landwehr in a massive refight of the Battle of Borodino at his club.
It's my dad and these miniatures that has been responsible for me spending a huge chunk of my life engrossed in this hobby.
My dad died in July.
Now, the very figures that started me off have been passed on to me and so I thought I'd show them off.
The Romans

The shelf I would stare at most as a child was full of Republican Romans. I think technically (according to WRG) the army consists of three legions and an allied legion, even though a consular army should have been two and two. 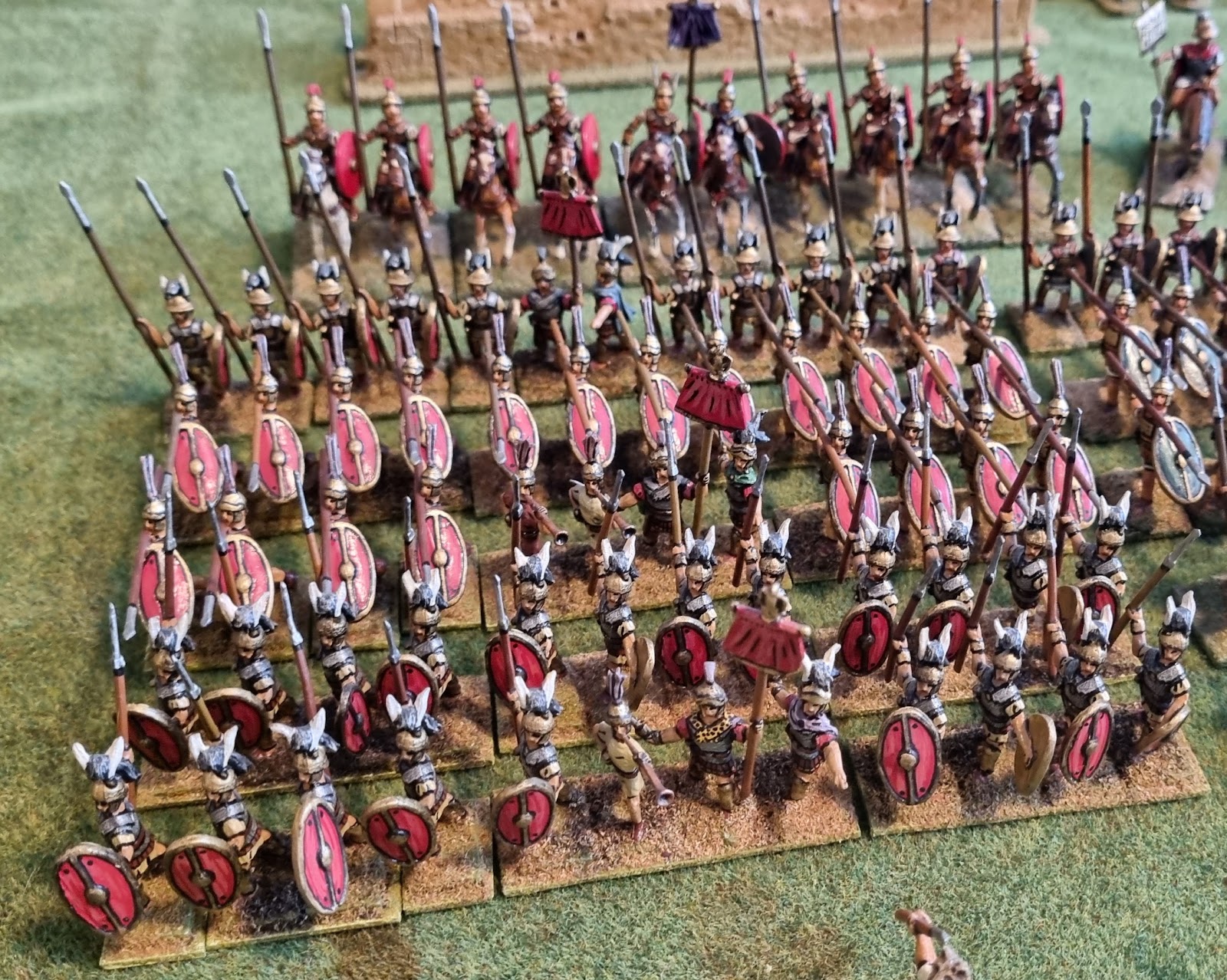 In an interesting detail of how understanding of different periods has changed, the principes (the second line) are armed with long spears, which is apparently only appropriate for Romes early wars against the Gauls and Samnites. Later on, certainly for the more famous Punic wars (for which this army was made), the principes were armed with pilum like the hastati at the front. 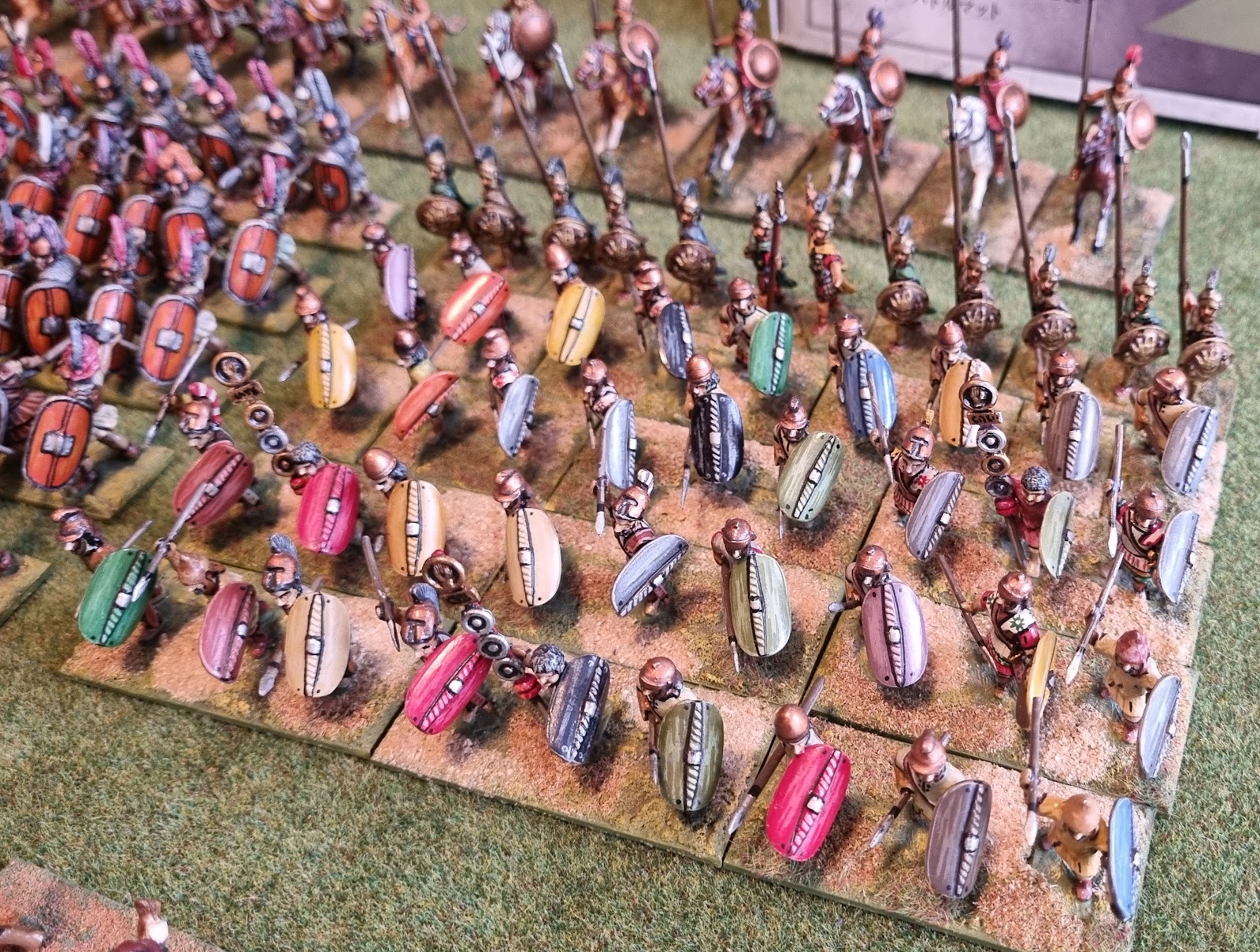 I've always loved the allied infantry drawn from elsewhere in Italy. There's actually an allied cavalry unit to complement the small Roman detachment, accurately reflecting the weakness Roman armies had in this period in terms of both the number and quality of cavalry they had at their disposal.
The Carthaginians

The Republican Romans were built to face off against a much larger Carthaginian force.
I think the Cathaginian army is large for a couple of reasons. Firstly, Hannibal is probably the historical commander my dad admired the most. Certainly, if you judged him by the books on his shelves, Hannibal's name was most common and enduring.
The second reason is probably the fact that as a mercenary army, the polyglot Carthaginian army would have been much more interesting to paint. 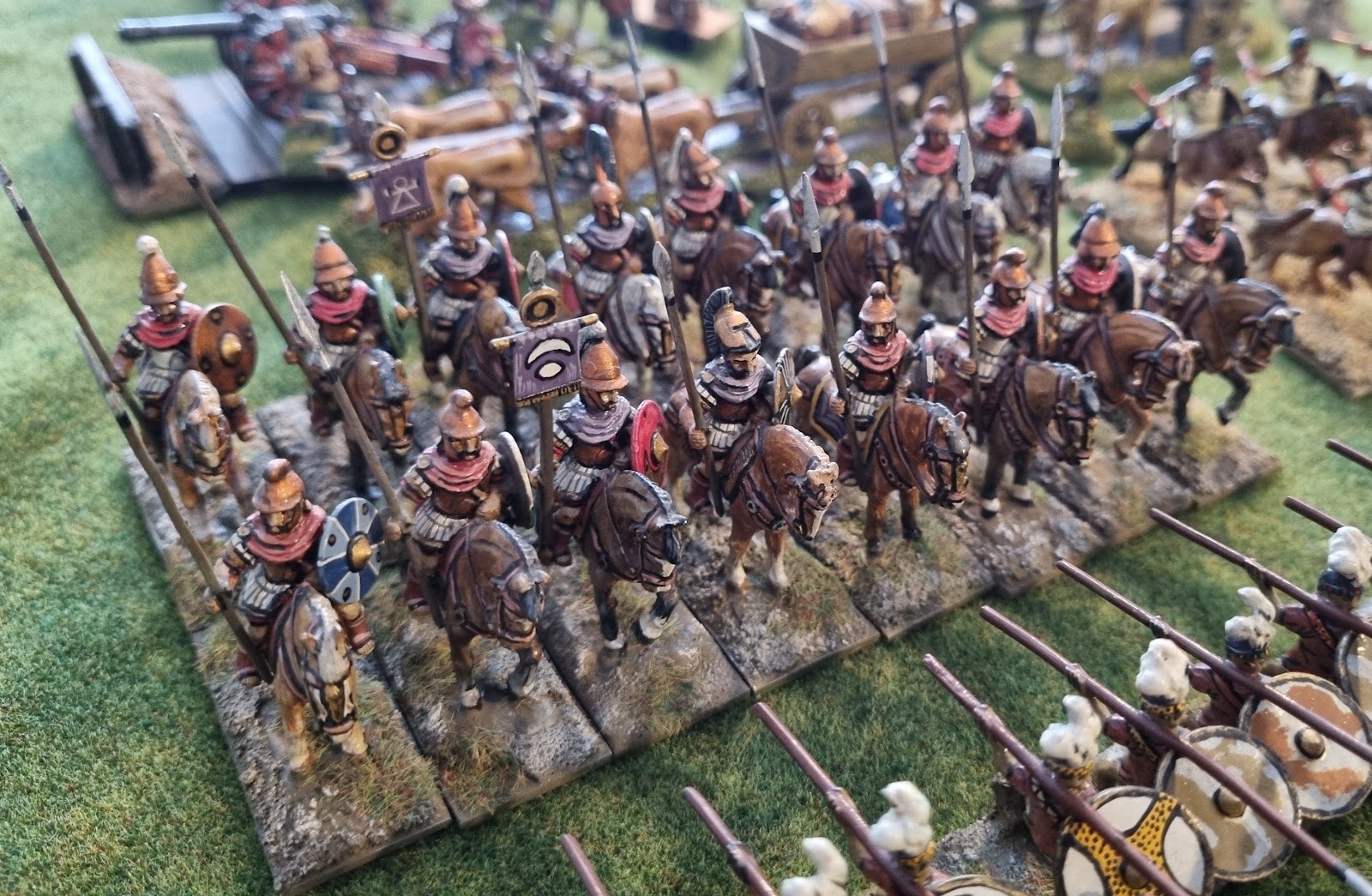 Perhaps my favourite unit of anything he ever painted are these citizen cavalry. Each shield had painted in an individual design that this photo doesn't do justice to. 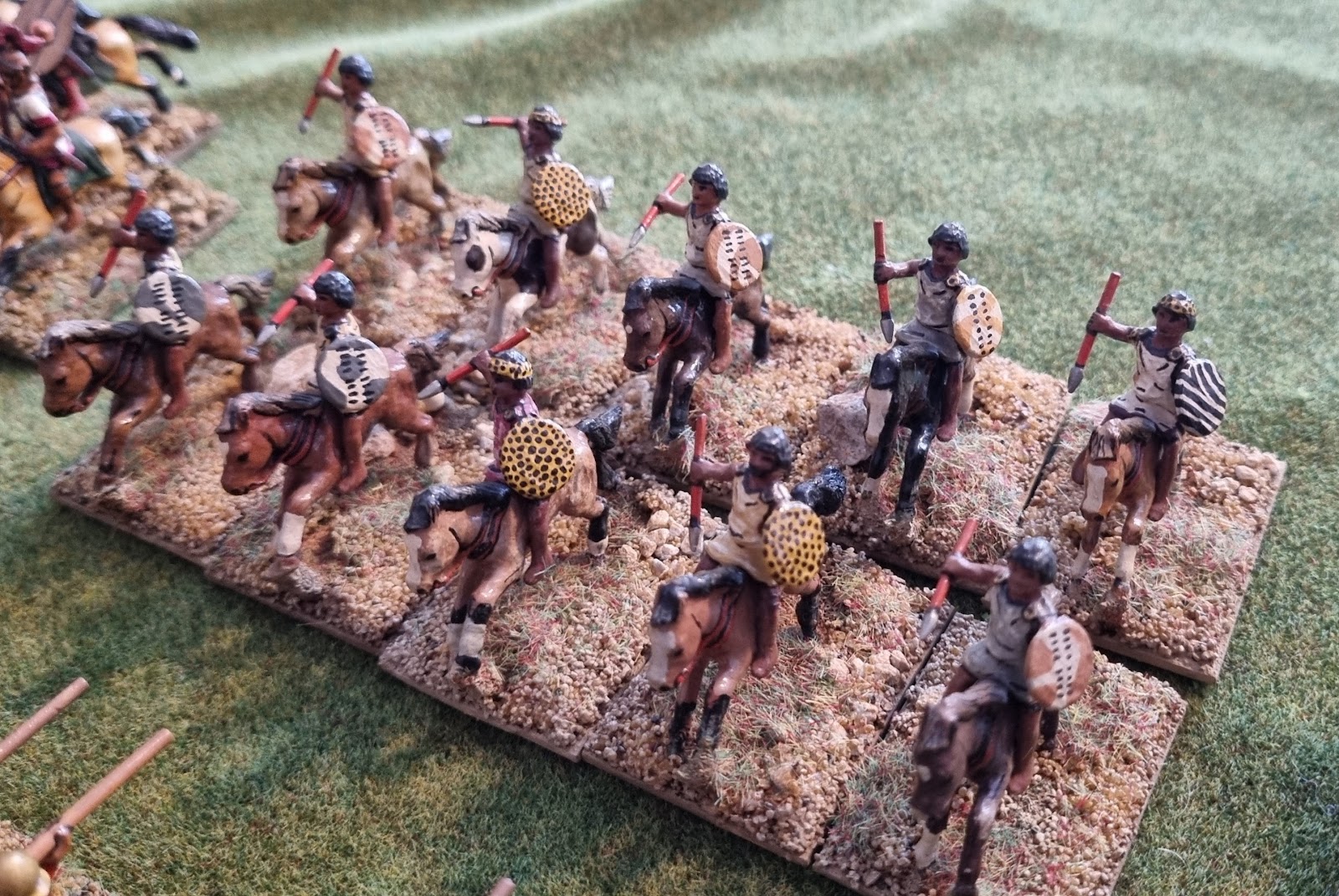 The Numidian cavalry also show similar attention to detail. My dad admitted that the leapordskin and zebra-skin shield were probably somewhat fanciful, but he liked them. 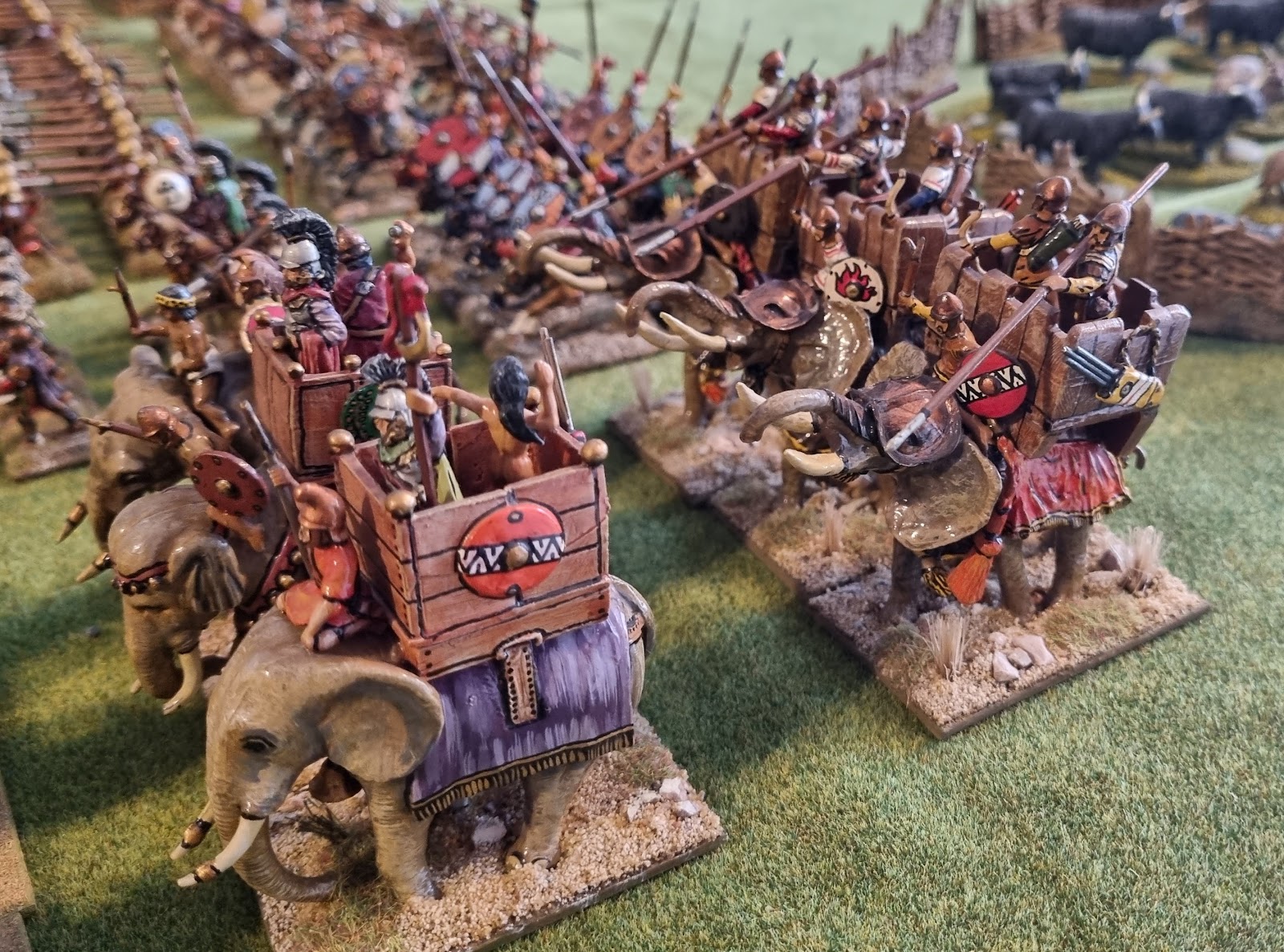 No Carthaginian army is complete without elephants, and this army doesn't disappoint on that front.
In fact, there are so many that there's only really the battle of Zama that could possibly require so many.

My dad fell out of painting for many years until I started taking him to a club when he visited. This not only got him painting again, but also saw him begin to rebase models  such as these Gauls for use with Warhammer Ancient Battles.
In fact, he even painted me a full Carthaginian army for WAB, so by combining the two I now have a frankly massive force which can probably be divided into separate smaller armies for the Gauls, Numidians and Iberians.
The Scots

My dad's historical and painting passions shifted from the ancient to the English Civil War, specifically the conflict in Scotland and the campaigns of another of his heroes, James Graham, the 1st Marquess of Montrose.
As with Hannibal, dad had something of a soft spot for the tactically brilliant hopeless cause. 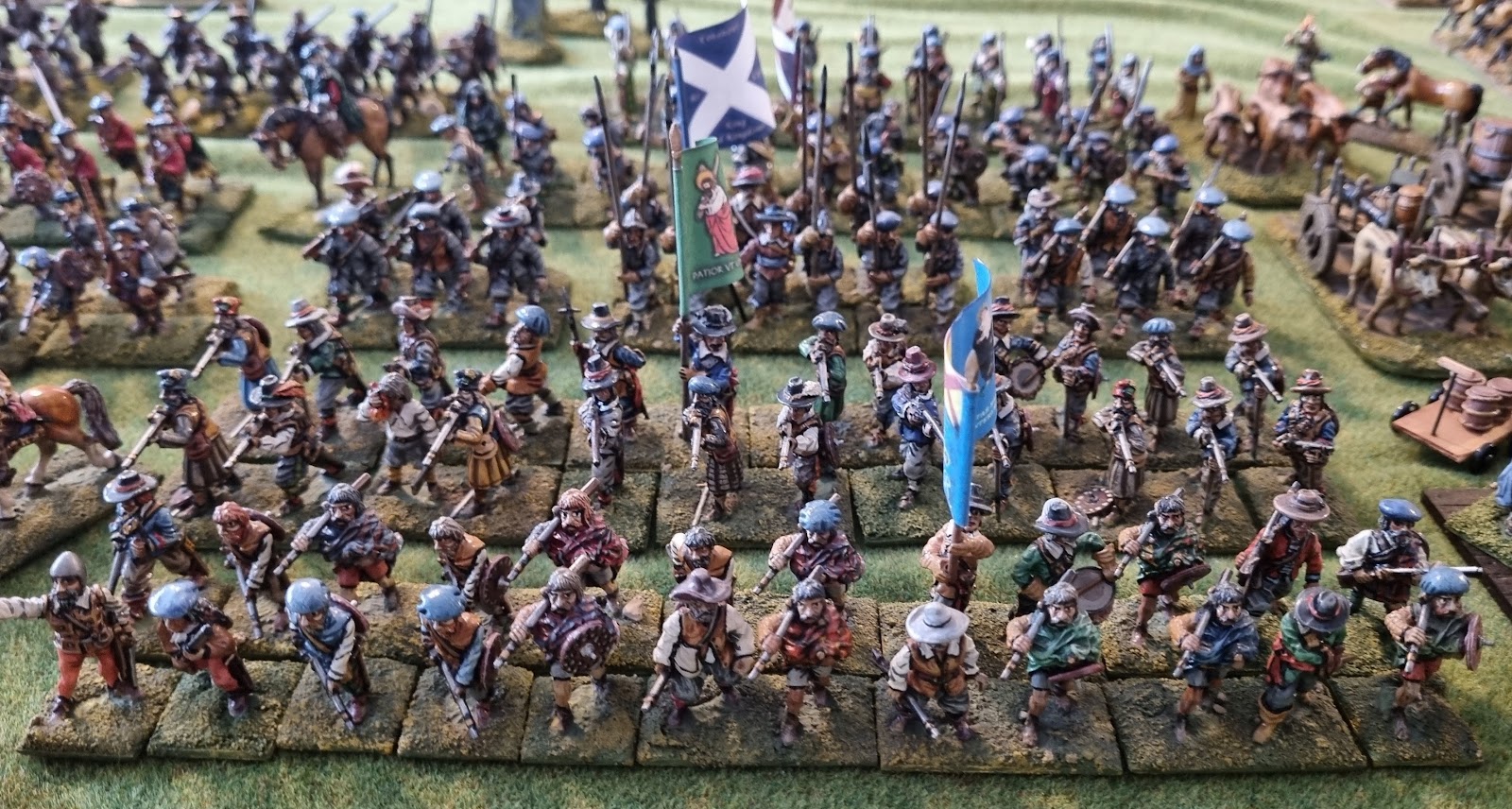 I'm in no way an expert on the English Civil War, and so I don't know what each regiment is, but I am aware that this large force consists of both royalist and convenanter units.
There's some work ahead to work out which is which. 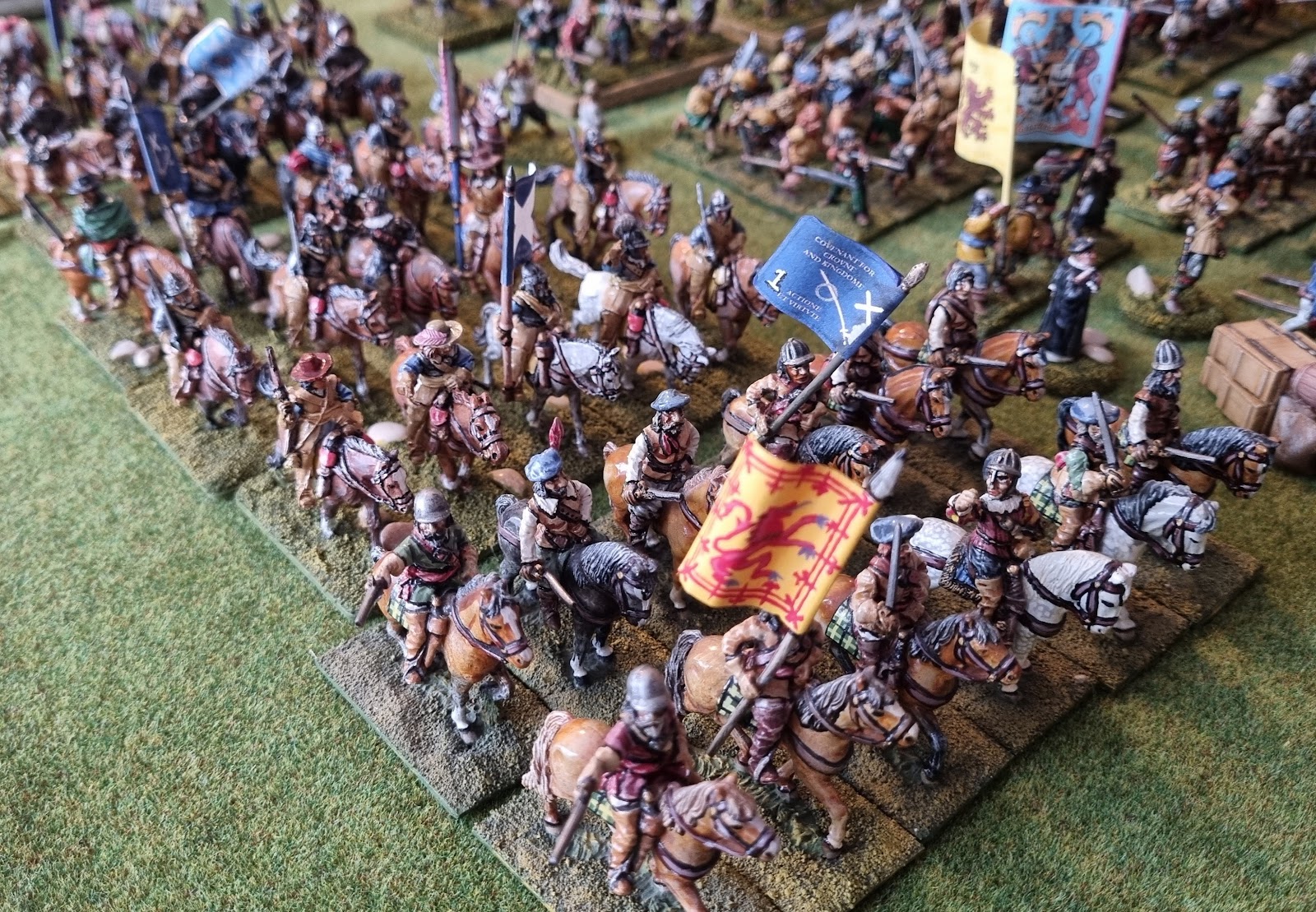 There are a large amount of cavalry, of which Montrose never had many, but that flag right at the front is definitely the royal standard of Scotland, and so at least some of these are royalists. 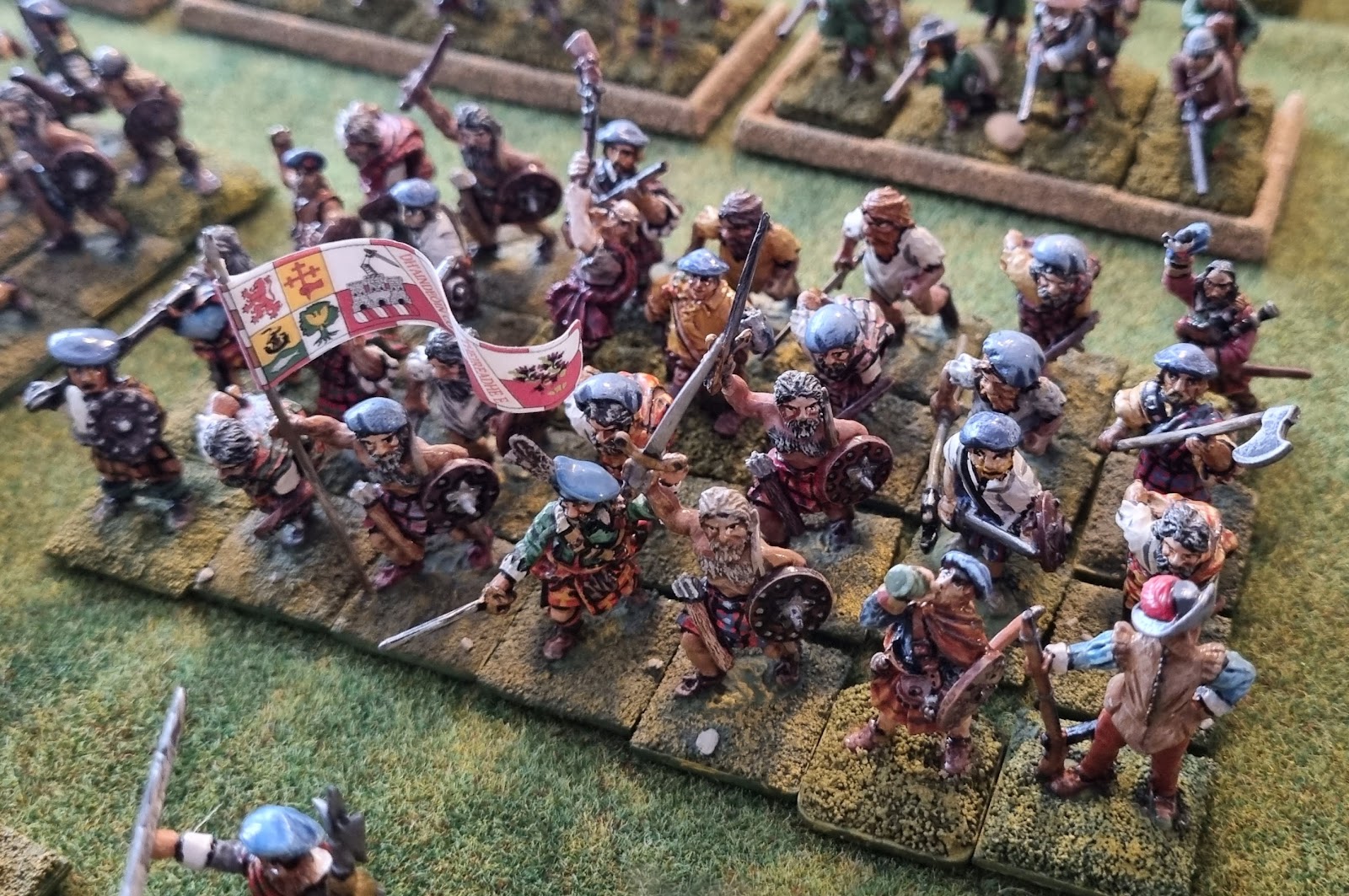 There are several regiments of highlanders for launching recklessly at the enemy. A tactic that became increasingly less effective as firearms became more ubiquitous.

There are also lotos and lots of artillery pieces.
I think one of the reasons for this is that I bought an ECW army (including plenty of guns) on impulse at one point and then gave it to him when I realised I would never paint it. 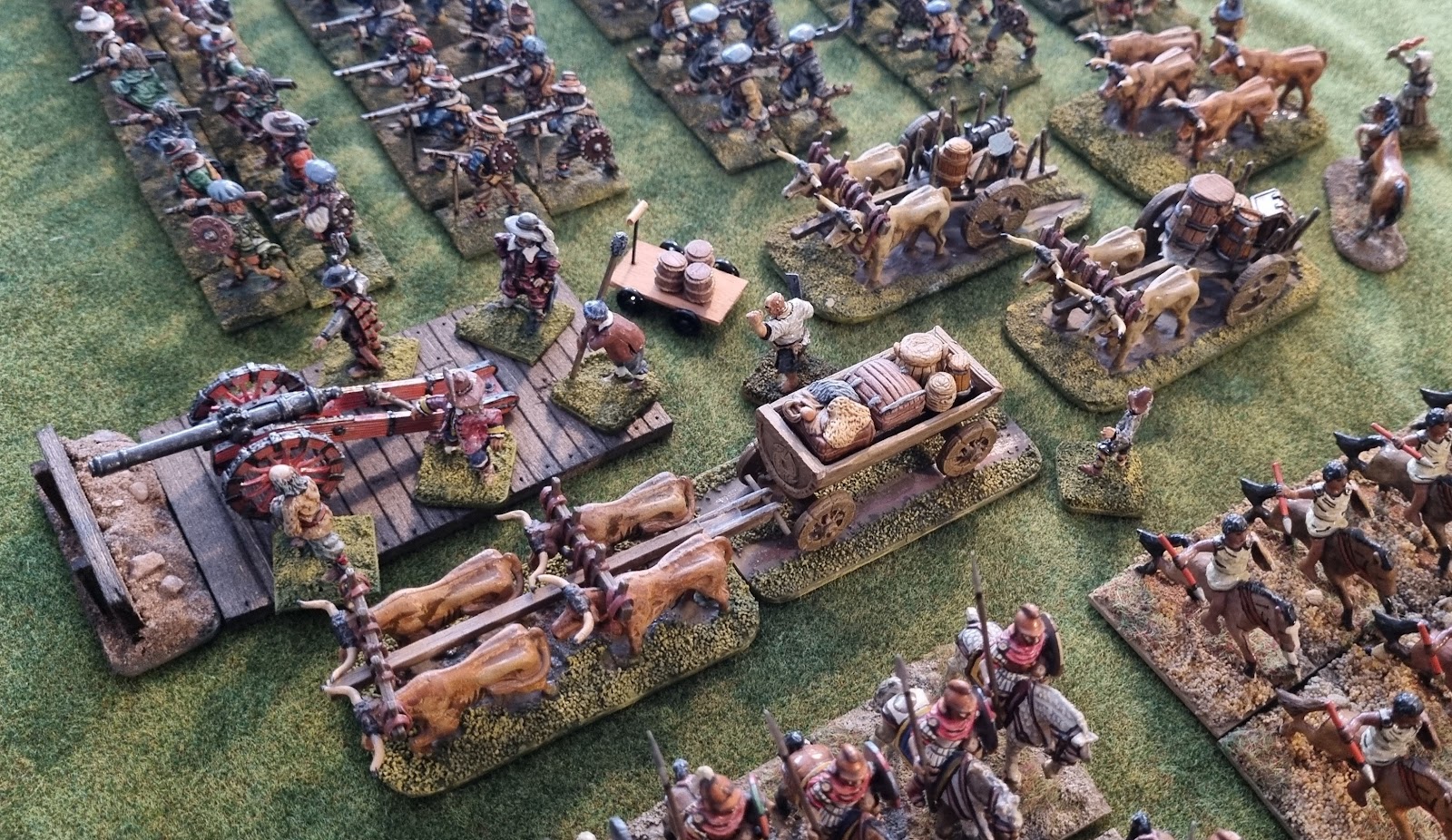 To go with the artillery, there's also a fairly hefty baggage train, which point to another of his passions: making things look right.
My dad spent a lot of time painting those things that added nothing but aesthetics to the table. There's a whole load of buildings for different eras that I haven't unpacked yet (due to lack of table space).
As a taster of this, here's just the livestock he painted to go with his farms. 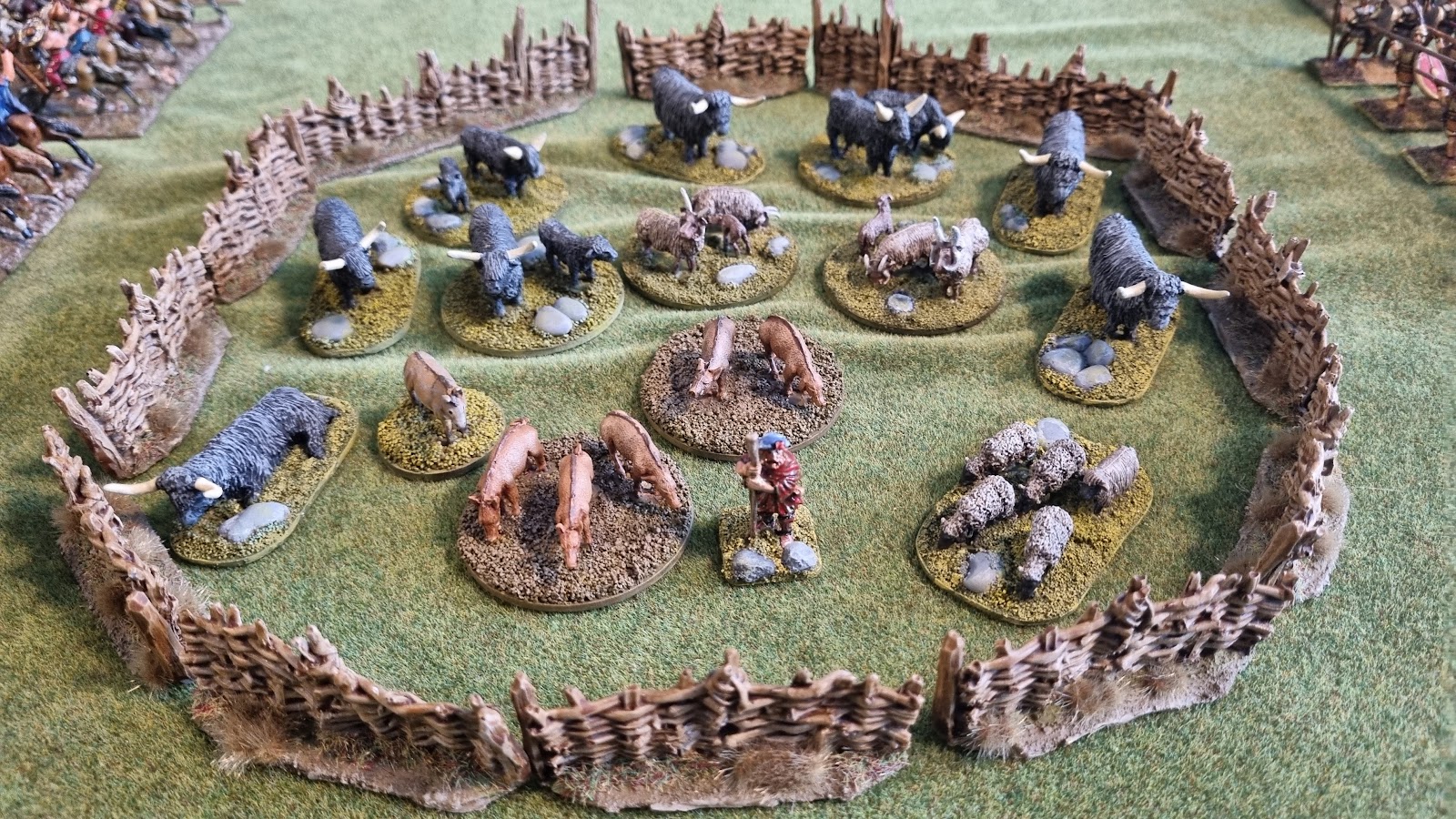 Along with the buildings, there are also several Saga warbands to unpack, complete with civilians and lots of scenery.
Also, there's only a handful of unpainted models (not added to totals yet, there are decisions to be made about them), demonstrating that lead piles aren't mandatory, a lesson I should take to heart.
However, in lieu of a lead pile, there is an entire lamdscape's worth of basing materials. Perhaps wargamers are all destined to be hoarders in some form.
This isn't meant to be a maudlin post. I'm going to miss my dad massively, but he has left me with so much. I'm not talking about the figures (although there are A LOT of them), but more the passion and interest in painting and playing wargames and a fascination with history.
I'm going to miss sharing that passion with him, even when he looked at me as if I was mad when I tried to explain what the hell 'Tzeentch' was or the plot of my latest 'He-Man vs Captain Scarlet' game of 7TV.
I'm going to miss hearing him rant about people on the Saga forum giving Dark Age Scots tartan kilts and saltire flags.
I'm going to miss the only person in my family who actually understood this madness.
Posted by Kieron at 04:09 3 comments:

Continuing my theme of only painting plastic models as I'm currently out of superglue, I've turned my attention to the 7TV feature pack Vlad's Army, in which a supernatural strike team of Nazi undead take on the stalwart Home Guard of Walsingham-on-sea.

Although there are some official models from Crooked Dice, I've taken the opportunity to raid my bitz box and lead pile for this project. I have bought the model for Hauptmann Kurtz (the vampiric second-in-command), but he's metal and so has to wait.
I've been really quick and dirty in terms of painting. If I don't mention it, just assume I've gone for a straightforward contrast-drybrush-wash approach. 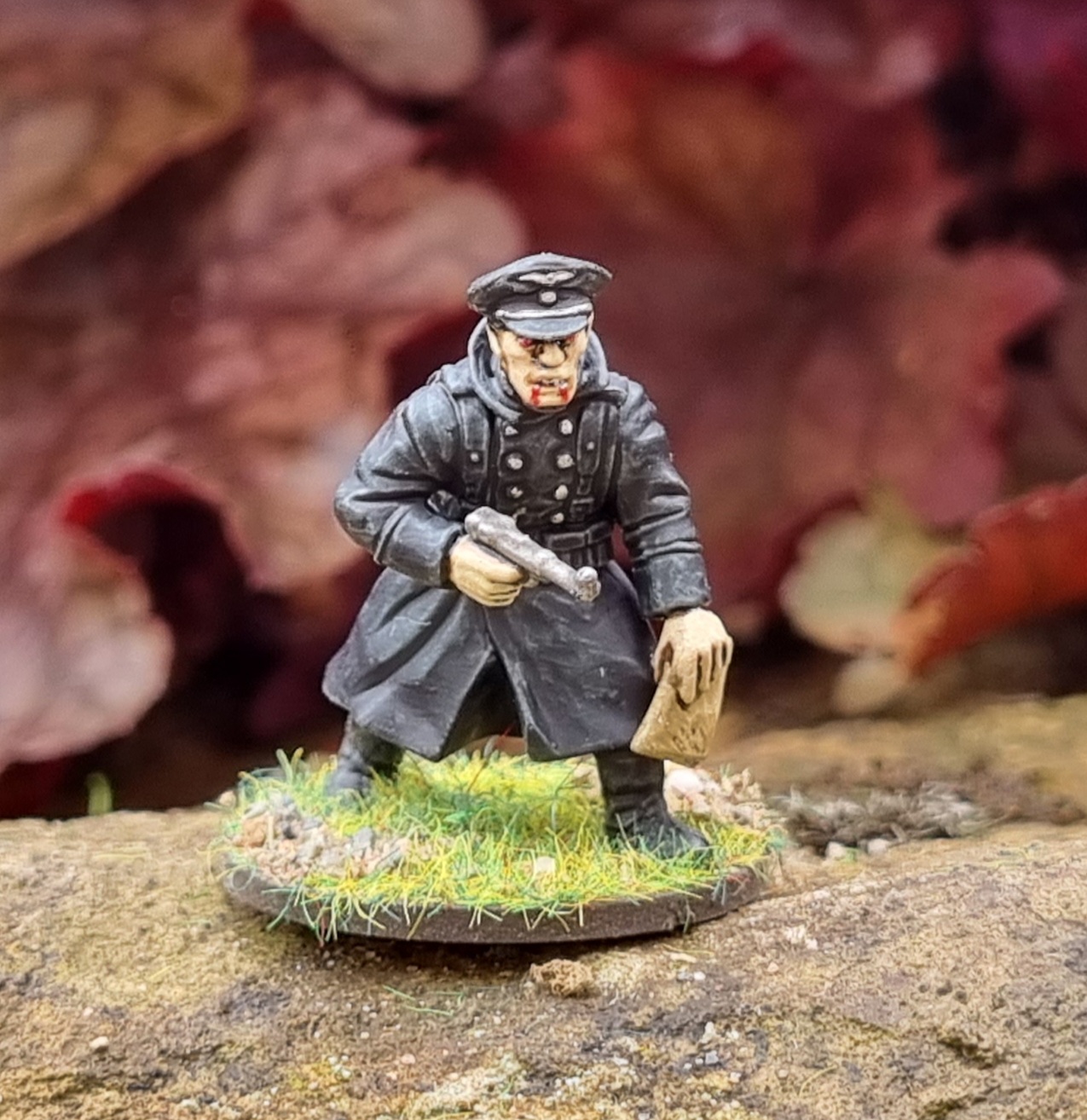 Major Schreck is the vampiric leader of the invasion force and star of the villainous cast. He was built from a German Winter Infantry sprue for Bolt Action that I got free with Wargames Illustrated some time back.
His pale skin, red eyes and blood trails on his chin mean he's unlikely to ever line up alongside my Fallschirmjäger army any time soon.

The Nachtjagerkommandos are lesser vampires who act as elite troops for Schreck. Despite the wings, these guys can't actually fly.
All three are different Heroclix Man-Bat sculpts I'd collected over the years. Their uniform trousers and the addition of some German equipment to their belts (which you can't actually see) are my only concession to their military service.

The scenarios require a host of Totgangers (zombies) and so my first four are made from the rest of the German Winter Infantry sprue.
Fortunately, these models are all in motion and so I was able to pose them as staggering forwards. Open hands from a range of sources, a couple of lost limbs and a liberal dollop of Blood for the Blood God complete their transformation into the undead.
The zombie skin is my usual recipe: Kislev Flesh, green wash, drybrush Ushabti Bone, Agrax Earthshade wash.

The rest of the Totgangers are made from a Fallschirmjäger sprue I had spare. Unfortunately, some of the poses were not very zombie-like and so I took more time to use spare zombie bits from old Studio Miniatures and Wargames Factory sprues to get them looking right.
This also led to a more gruesome appearance meaning that the fictional Vlad's Army TV show would be almost certain to draw the ire of Mary Whitehouse.
As a historical note, at this point in the war the Fallschirmjäger shouldn't have camouflage smocks. However, I'm not sure I'm massively worried about the historical accuracy of my zombies... 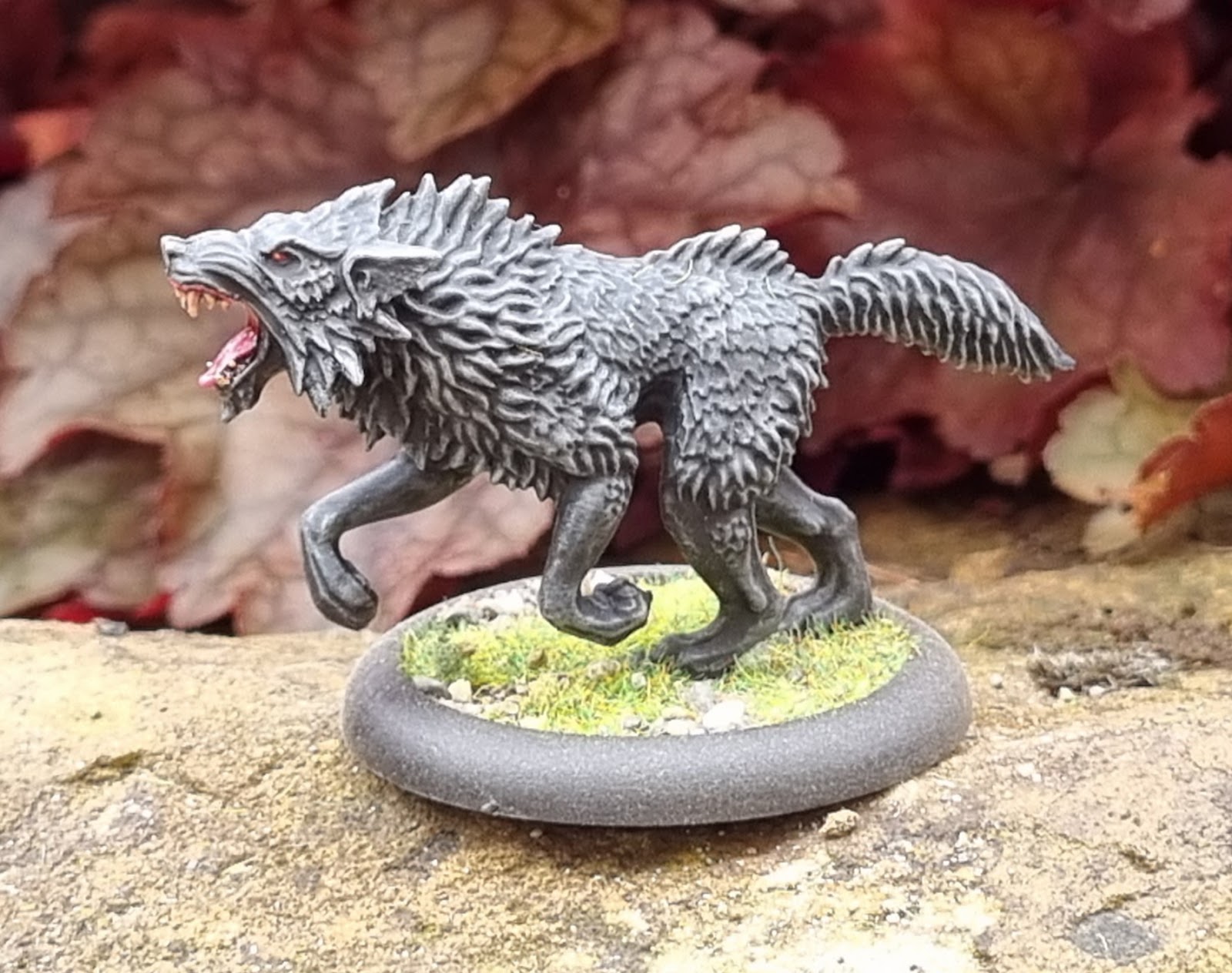 The final model is not actually for Vlad's Army but fit the theme and was easy to do. There are Wolves in tje feature pack, but they are smaller than this beast.
This is a Fenrisian Wolf from 40k. It's likely to pop up in different games when I need a Dire Wolf, Warg Chieftain or other monstrous dog. Despite having two eyes I can certainly work as Black Schuck, the spectral hound from the Children of the Fields programme guide.
As mentioned, I still have Hauptmann Kurtz to paint and some bats to rebase as swarms, and I have some undead wolves from Descent I can use to complete the cast.
After that, I need to move on to the Walsingham-on-sea Home Guard. I had intended to just use my Operation Sealion/VBCW models to represent them, but after being given a set of Warlord Games Dad's Army Miniatures at the last 7TV day, it would seem churlish not to use them as Captain Mainwaring and company are the obvious source material for Captain Bannerman's command in Vlad's Army. 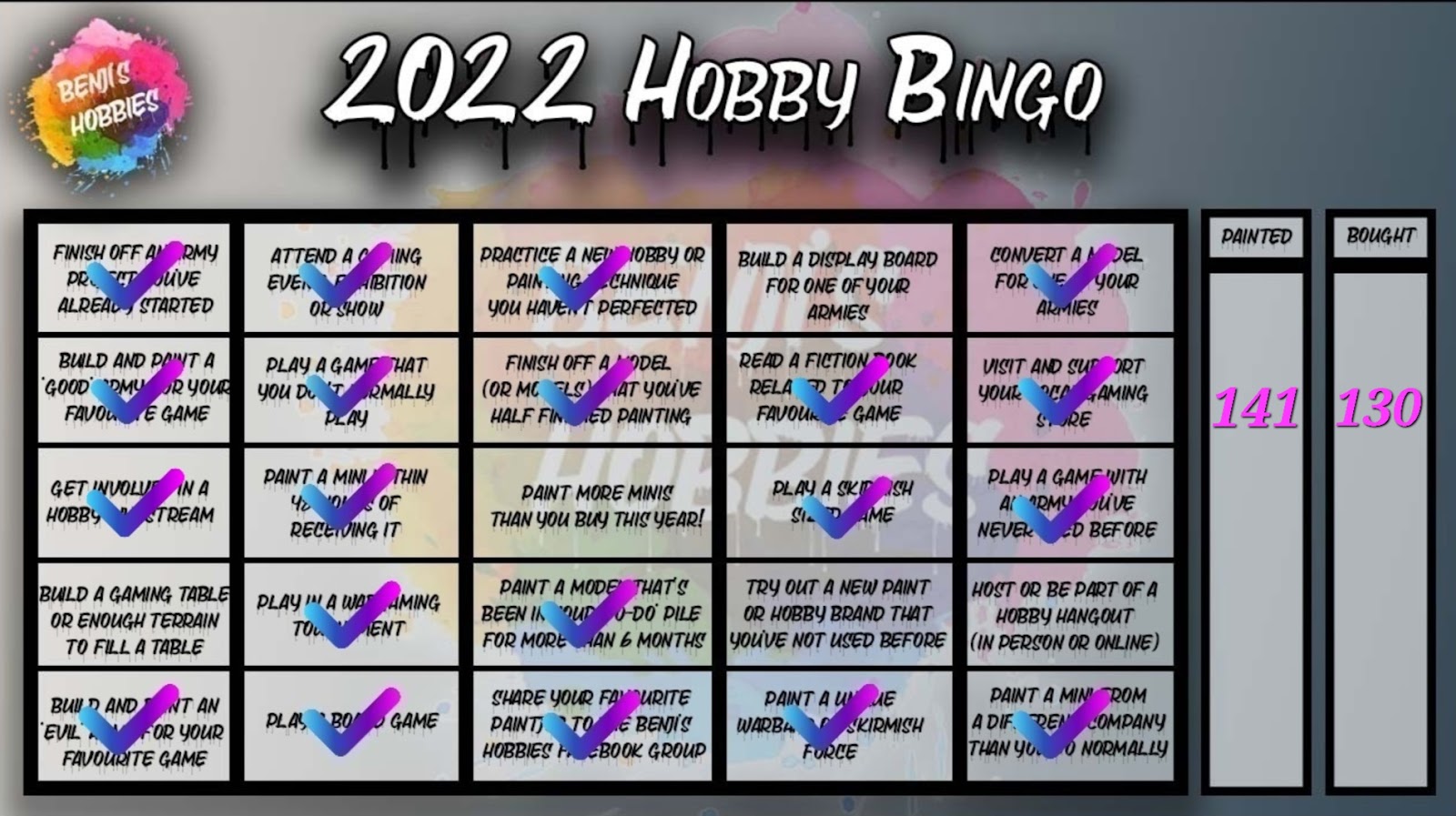 A good chunk of progress only slightly undermined by the arrival of more Space Marines this week. With them being plastic and the Dad's Army miniature being metal, I'm likely to return to the 31st Millennium before completing the Home Guard cast.
Acquired: 130
Painted: 141
Posted by Kieron at 03:27 7 comments: