Building on our enjoyment of the Dr Who game last week, we set about trying out another genre using the 7TV2 rules...this time, zombies!

We used a variation of the Break Down scenario from the 7ombieTV rulebook. In a change of sides, Matt and I would this time be the bad guys, the zombie horde, whilst Mike and Wes would be using a motley collection of survivors made up from our combined collections (you may recognise a few of them).

The aim of the scenario was for the survivors to walk from their vehicle (which was out of gas) to the gas station, collect the maguffin and return it to the vehicle (the survivors would get 1vp if the collected the maguffin, and 1d6 if they returned to their vehicle). Meanwhile, the zombies would have to stop them. The objective tokens were zombie spawn points, which we could return zombies to play at by spending a plot point, but could be cleared by survivors (gaining them 1vp) if they made contact with them - preventing more zombies returning at that point.

Here's the initial set up:

Despite the terrible casualties on both sides, we worked out the final score as...

Ultimately, it seems that taking the time to kill as many zombies as possible, stopped the survivors from achieving their primary goal, which would have won them the game. However, more zombies in combat would potentially had led to more deaths.

This was a really interesting game as early on, Matt and I felt that we were being massacred, and when the Abomination was moved off to a corner (and out of the game), we thought we'd totally lost. The zombies really struggle against ranged weapons. However, a convenient explosion and stealing the initiative saw the tables turned quite quickly, and when things got up close and personal, the zombies really came into their own, as sheer number of attacks can drag down even the toughest opponents.

Although this was a good game, I think the zombie genre needs a few changes to the game to really feel right:


Next time, I'll probably create the casts before the game and (depending on time) do some of the above.
Posted by Kieron at 09:36 4 comments:

7TV - "Who Do You Think You Are Kidding Mr Davros?"

September1940. Somewhere in Dorset weary British soldiers have been tasked with training a local Home Guard regiment in preparation for what is believed will be the imminent German invasion of Blighty. Little do they know that they will soon be on the front lines against an invasion from much further away; an invasion that threatens to exterminate them all!

Meanwhile, in a farmyard not too far away, a strange whooshing sound heralds the appearance of a Police Box where there wasn't one before. 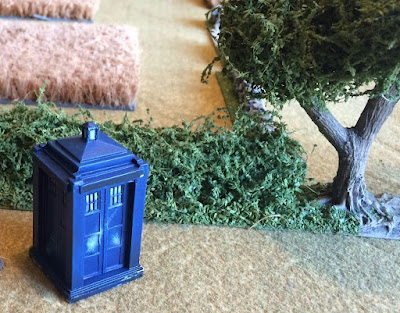 The Doctor & Friends (Me)

As before, the Dalek stat cards came from one of the members of the 7TV Action! group on Facebook. We're not sure if they truly represent the power of Daleks yet, but they give a good game (which is arguably more important).

We decided to play a straight fight, as it seemed appropriate, with the Daleks attacking the thin line of soldiers in the vicinity of the farm. We didn't use objective tokens (mainly because I forgot about them before we started), but it didn't matter. I figure that Davros had arrived intent of using the confusion of the war to build a power base ready to attack the invading German army when the inevitably invaded (Davros doesn't do history) and defeat them when they are stretched thinly, then go on to take over the world.

However, when he became aware of the Doctor's involvement in revealing his presence, Davros decides to throw caution to the wind and attempt to destroy the Doctor. Little does he know that the Doctor and Sarah-Jane have managed to patch up the differences between the squabbling Army Regulars and Home Guard, and are now ready to fight them in the hedges.

A really great game which swung backwards and forwards, with the countdown cards adding drama, intrigue and plot twists aplenty. My favourite moment was the Doctor returning from the dead as the Daleks looked to be on the verge of victory. The moment could only have been improved if Mike had brought his Tom Baker model with him and we could have had an in-game regeneration.

7TV continues to be a really good game, and although this was technically sci-fi, the game showed that 7TV could easily cope with skirmish games of WWI, WWII or VBCW.

I need to think about how we can create more narrative scenarios, and I need to remember to place the objective tokens in future. The game can clearly cope with tweaking, and I felt that giving the Daleks access to the unit rule really made them more of a threat, although they still struggled for activation counters.