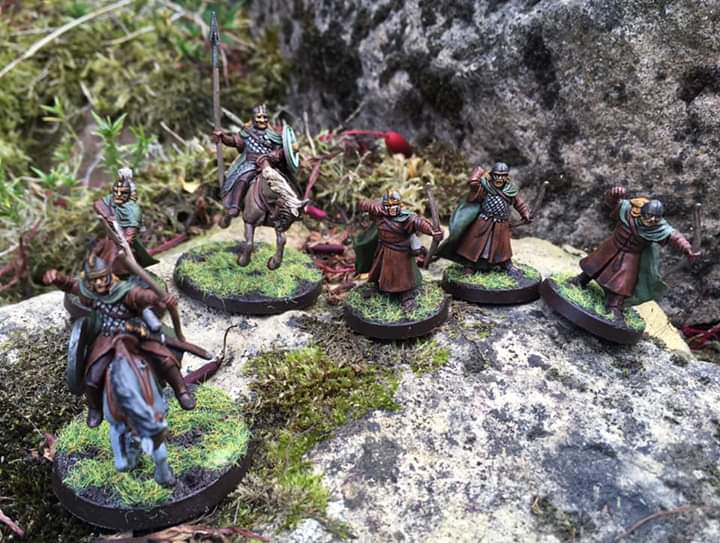 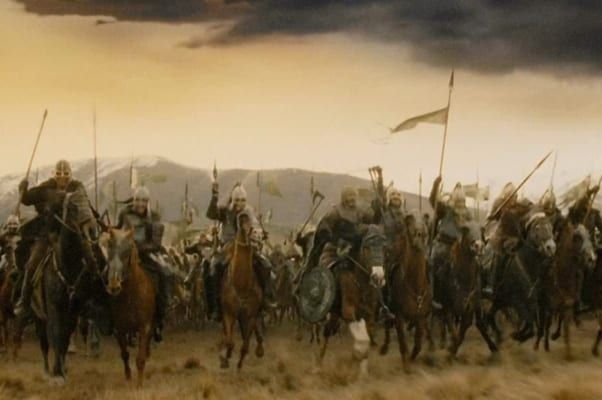 I’ll cope with this chore because the end result is more than just a unit of cavalry. It’s a goal worth the faffing.
This little batch of troops were actually given to me by Aneurin a long while ago, when I was bemoaning my Saga Vikings lack of ranged threat and the difficulties I had in chasing down the Welsh in particular. He gave me eight archers and a few riders.
So these became my testing ground for how to paint the Rohirrim, and I think it’s turned out well. I’ve had to raid my bits box for a suitable shield for one of them, but I think it looks okay.
I’m aiming for a mounted force (although refighting Helm’s Deep is tempting), but the archers and other foot troops that I do will serve well enough a dismounted riders...until I have enoyght for a siege, that is.
This army is going to be slower going than the Uruk-Hai, there’s much more to paint on them, but now I’ve worked out how to go about them, the others I’ve bought should come together slightly more quickly.
Posted by Kieron at 07:10 8 comments: 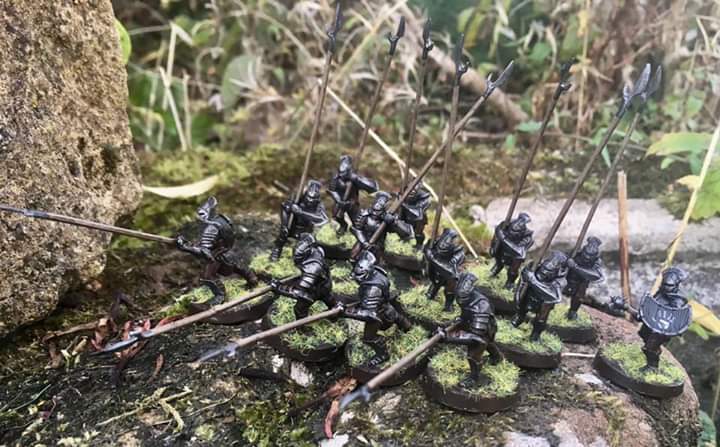 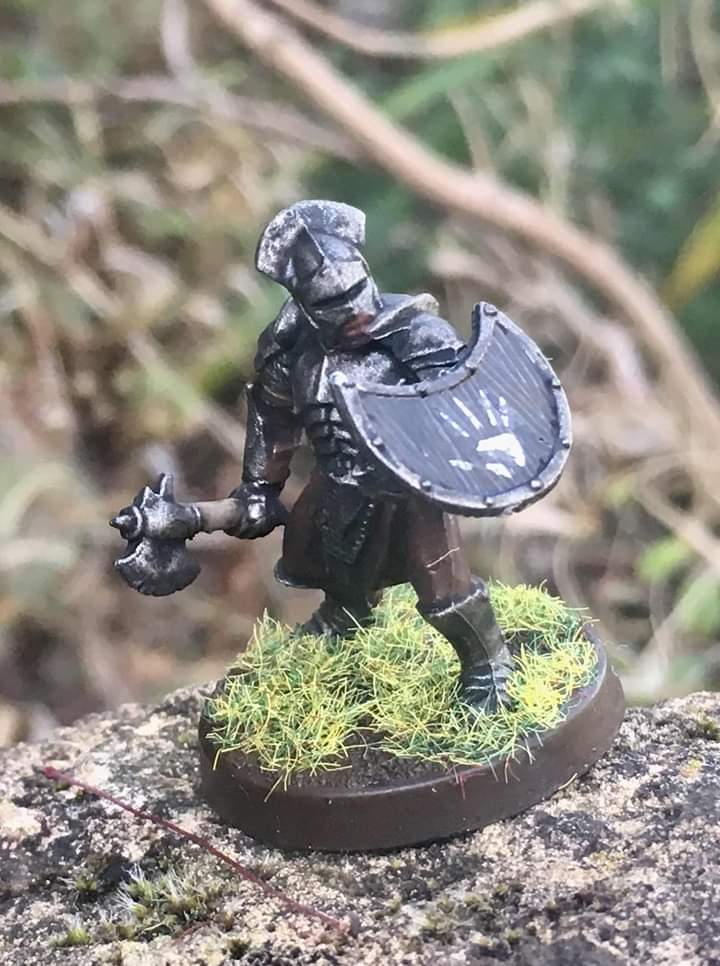 The captain was made from a broken pikeman whose pike had gone missing. I’ve simply used an Orc shield I had in my bits box, and the hand from an ancient GW skeleton warrior. That box was probably my first purchase from a GW store and it amuses me that I’m still using bits now.
Painting the white hand on his shield caused me some headaches, but some helpful soul pointed me in the direction of advice from the GW Eavy Metal team which I think did the trick. I’m happy with it, but I sense that I’m going to get much more practice.
So, the Army of Isengard marches. I have more Uruk-Hai on the way and a Saruman I found in my bits box to add, and there’s that other army I mentioned. More on that soon.
Posted by Kieron at 03:12 12 comments:

In the dim and distant past, before I lived where I live now, before I did what I do now, before this blog ever existed, I began collecting Lord of the Rings miniatures when the game was first released. 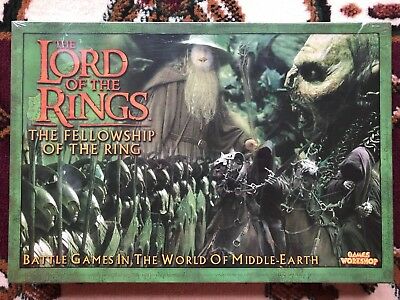 Lord of the Rings has always been my first love in terms of nerdish fandom, easily beating the likes of Star Wars, Batman and other nostalgic delights. I also loved the films. They were pretty much as good as movies of the books could get. Therefore the Lord of the Rings Miniatures Game seemed to be the perfect gaming project for me.
I painted the Fellowship, some Nazgûl, Arwen, Saruman, some Elves, a few Numenoreans, a host of Moria Goblins and even a Cave Troll. 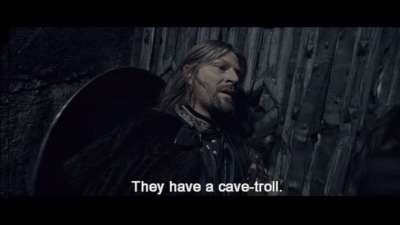 I had a paint queue that included Uruk-Hai, a second Fellowship (although second Boromir was in the process of dying), Warriors of Minas Tirith, another Cave Troll and even a Balrog. I had my eyes on the Two Towers boxed set too.
And then something happened...I joined a gaming club for the first time in my life.
It was full of really fantastic people, most of whom are still friends to this day. They played Warhammer Fantasy Battle, Warhammer Ancient Battles, Blood Bowl and Flames of War. They drew me into smaller games like Saga, away from the bigger games companies and encouraged me to become the ecclectic gamer you know today.
But they didn’t play Lord of the Rings.
My collection lay unused, and my paint queue remained unpainted. Slowly, but surely models were diverted to other projects. Second Legolas joined the ranks of my Warhammer Wood Elves as a unit champion, dying Boromir became part of a unit filler diorama in my Bretonnian infantry, and the Nazgûl sold their swords in the service of my Vampire Counts. 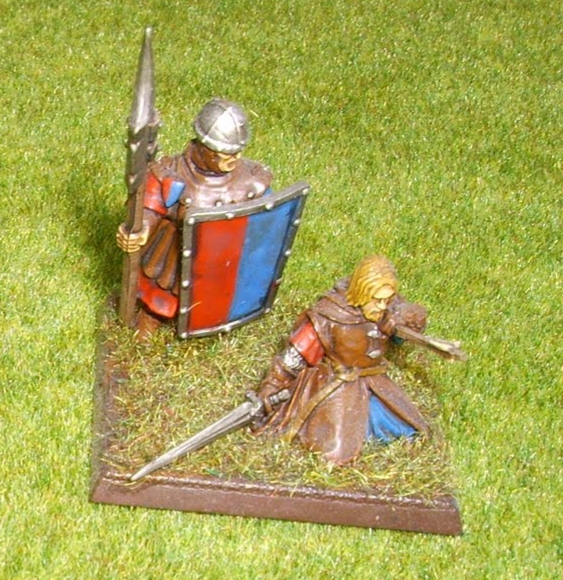 The unpainted models I owned were sold to fund other projects, and finally I exchanged my painted models for some unpainted Napoleonic British. All that I kept were the Fellowship of the ring and those few models that I was using in other armies.
It is the only painted ‘army’ that I have ever sold, and I’ve regretted it ever since. I didn’t even do anything with the British.
History passed into legend, legend passed into myth, and my interest in gaming the Lord of the Rings passed out of all knowledge of those that I gamed with. Until, when chance came, it ensnared new victims. 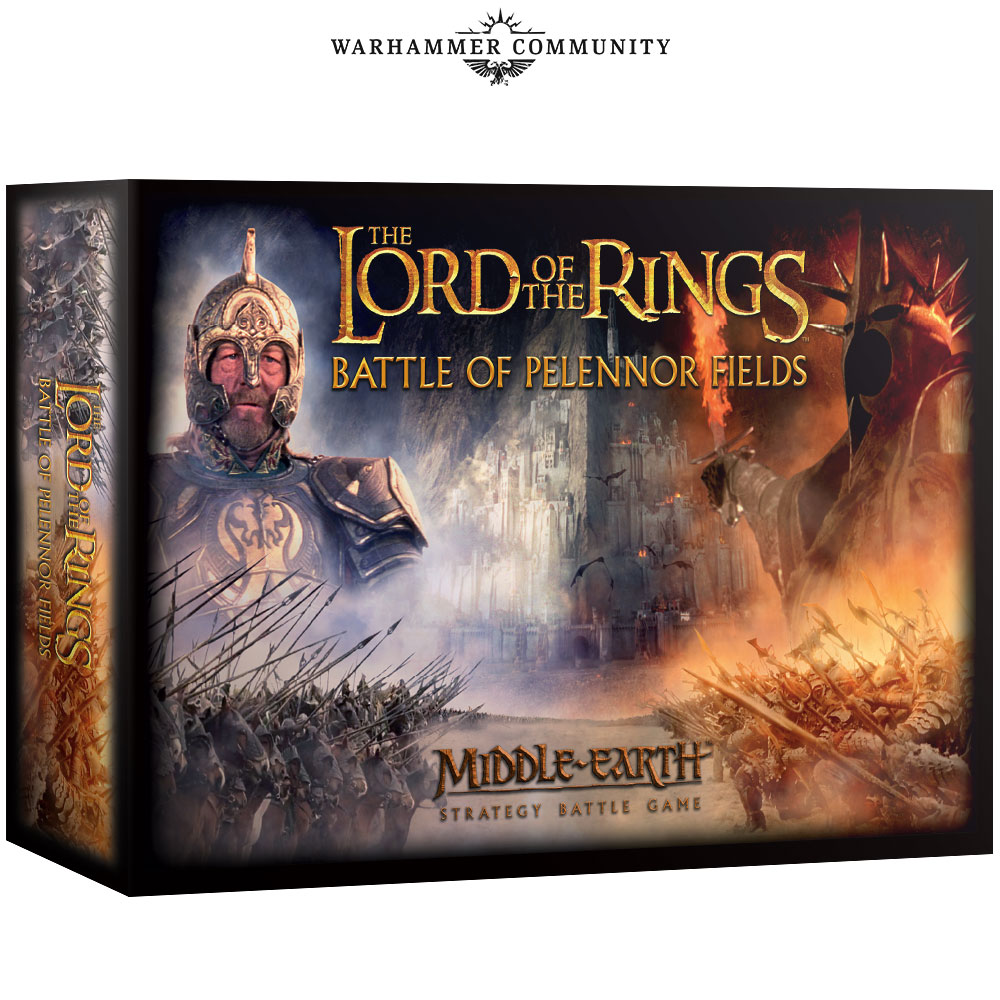 The new edition of the Middle Earth Strategy Battle Game was released and Pete expressed an interest in dong an army, Minas Tirith specifically. Mike started working on some Khandish chariots he had bought for another project. Wes surprised us all by buying the Pelennor Fields boxed set and Matt casually mentioned that he still had the Hobbit boxed set sitting unopened.
And the old desire to game Lord of the Rings came roaring back into my soul. 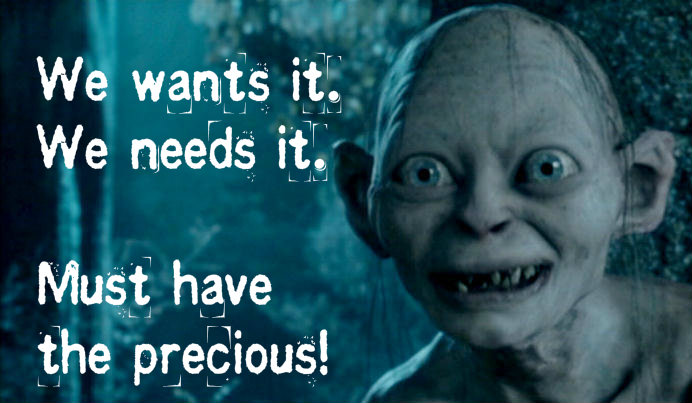 The Fellowship were dusted off (literally, they’ve been on a shelf for fifteen years), given a quick wash as they were painted before Agrax Earthshade (aka ‘Liquid Talent’) was invented, given some base attention, and a couple of coats were redone in slightly less garish colours.

Given that I did these so long ago, I was surprised how good they were in comparison to a lot of my earlier painting. I really must have taken my time with them, or my eyes were just better back then. I particularly like Boromir’s coat and the cloaks and robes. These are genuinely some of my favourite models that I’ve ever painted.
And so, I’m back into Lord of the Rings. The bits box has been scoured for the few remaining models, the Nazgûl shall return to their rightful role (joined by some Wargs that were used as Dire Wolves), eBay has already been hit for some second hand miniatures, and I’ve watched all three films in the space of a week.
At some point, I’ll probably need to buy some rules...
Posted by Kieron at 05:33 14 comments:

After a bit of a flurry earlier in the year, this little project has been on a back burner for a while. However, it’s back with a vengeance, and this time I’ve added some firepower to my small force.

The MMG team is manning an MG42, which was ‘affectionately’ nicknamed Hitler’s Buzzsaw due to the noise that it made, thanks to it’s high rate of fire.
This rate of fire is represented in the rules by German MG teams being just better that those of other nations. As such I’m looking forward to getting this unit on the tabletop.

German LMG teams also get the same bonus as the MMG and so this team will be adding a long range threat to one of my two squads of veterans.
The pose strikes me as a sure fire way to get burst eardrums, however, this isn’t the only sculpt I’ve seen if Fallschirmjager using a squad machine gun like this, and so I’m willing to take it as a thing they did.

These two were in the same pack as the LMG team and are both packing SMGs. They’ll therefore probably end up as NCOs or command models before long.
I had a bit of a job getting the camouflage the same as before as I couldn’t remember the colours I’d used. The newer models seem a bit more yellow, but I think this might be due to the brown and green splodges being further apart, and do it seems to be an optical illusion.

And here’s my ‘army’ in all its glory. However, due to them all being veterans (and me including an air observer) these 19 men are currently worth 500 points.
I’m not sure how effective they’d be though.
Posted by Kieron at 10:20 9 comments:

Back from holidays, back to work and back to Act Two of our Descent campaign. In order to spice things up I’ve decided to paint up a few different monsters to throw against the group.

This group actually come from and expansion to the main game called ‘The Trollfens’. It includes three Harpies and two Plague Worms.
There are actually another model for each of these groups, but to speed things up I’ve decided to only paint what I need for our campaign for now.

As ever, with Descent miniatures, I’m keeping things simple and so there’s not much to write home about with the Harpies, although I’m keeping my ‘red means master monster’ rule for clarity during the game.
These Harpies stand a good chance of being drafted into my Masters of the Universe games as there are a group of Harpies that feature quite prominently in the movie that introduced She-Ra.

With the Plague Worms, I’ve painted in the same way I did my Death Worm for 7TV for a couple of reasons. Firstly, I like it and it should brighten up the game a bit as I’m aware that some of my monsters are a bit dour in their colour schemes.
Secondly, it allows me to use the alongside the Death Worm in scenarios, possibly as it’s progeny.
One slight point is that I’ve had to do their bases differently to the rest of the Descent models as the way they are sculpted means they needed to be surrounded by marsh water rather than dry earth. I’m fairly happy with the effect.
The campaign gets restarted tonight, so I’d best go and read the scenarios...and the rules, as it’s been a while.
Posted by Kieron at 07:38 7 comments: