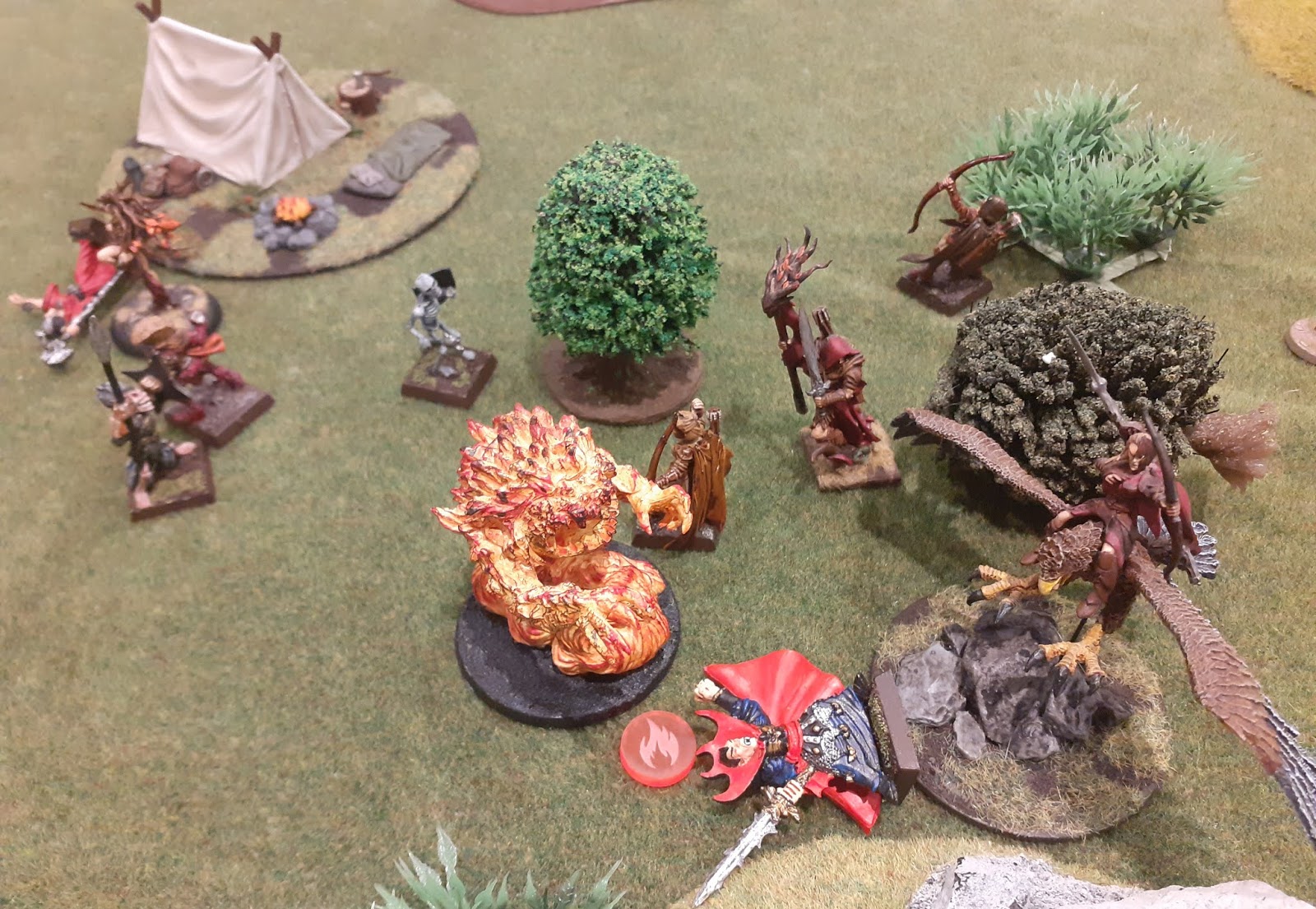 I've been playing some fantasy skirmish games recently, and one of those games saw a group of Elven Guardians tangling with the unquiet dead around the site of an Adventurers' Camp, and so I needed to make a suitable campsite. 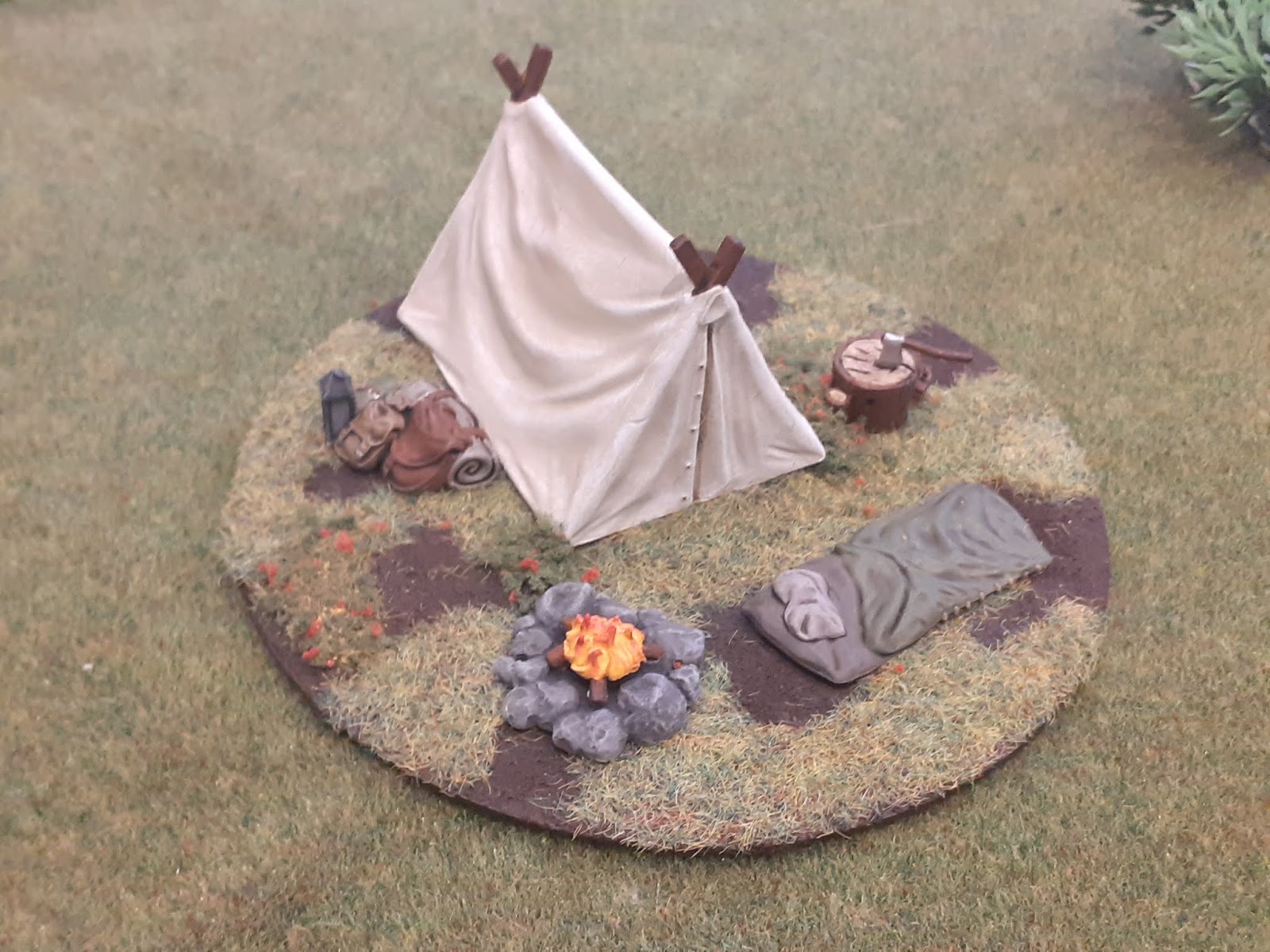 Fortunately, I had the perfect resource in the Mantic Adventurers' Camp Terrain Crate set, featuring a tent, campfire, bedroom, baggage and wood pile. Therefore these were painted really simply and based on an old CD.
Compared to the other Mantic Terrain Crates I've painted, this was probably my favourite set, mainly because it had no thin elements which are impossible to straighten out like the stalls and cart in the Market Day set.
A functional piece, but potentially useful for both Middle Earth SBG and 7TV: Fantasy, that is coming next year.
Despite having several parts, this is technically a single model, and so that's what I'm counting it as:
Acquired: 207
Painted: 240
Posted by Kieron at 11:09 1 comment:

A Bridge Too Far...no, not that one

After six months of not, I managed to get a game of Bolt Action in against Pete, and we started to work our way through the Campaign: Stalingrad book with the 'Last Bridge Over The River Don' scenario, set in August 1942. 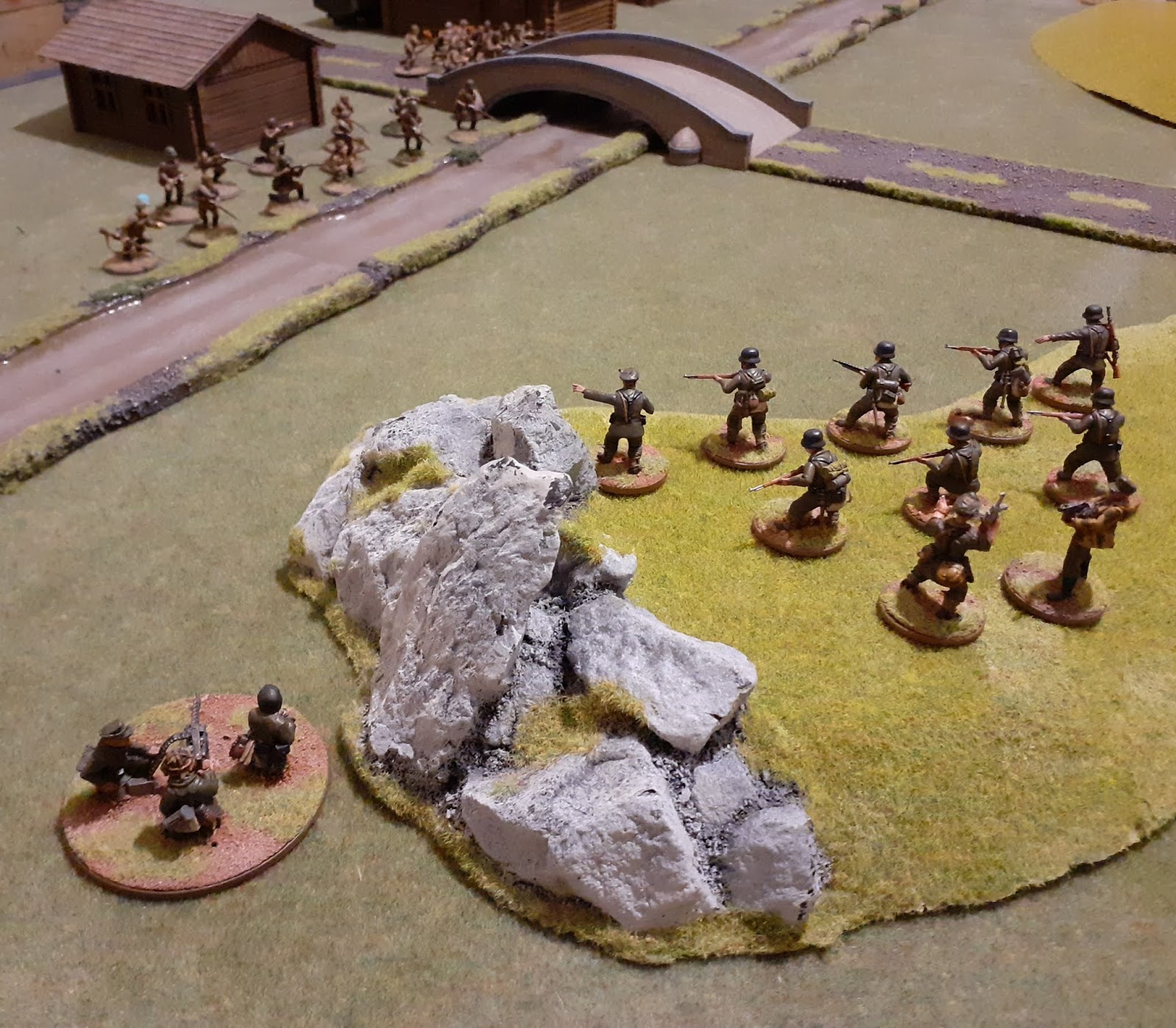 The scenario recreates part of the frantic retreat of the Soviet 62nd Army in the face of the German blitzkrieg.
My forces would have to race down the board, cross the bridge and then blow it, whilst the Germans swarmed in from both sides seeking to cut my forces off and capture the bridge intact. 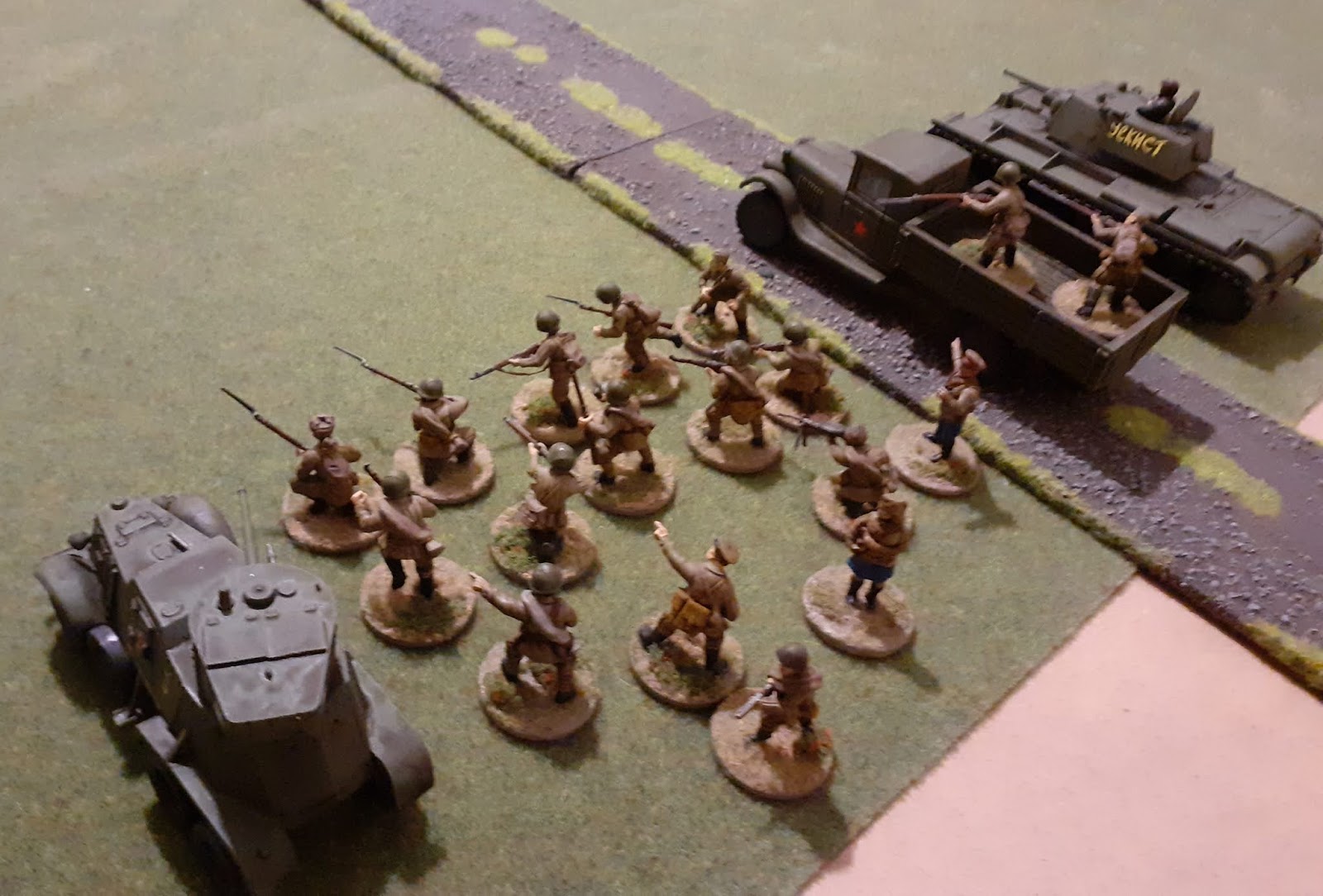 My retreating force featured two LMG squads, one of which was fortunate enough to be mounted in a truck. I had a cunning plan that the footslogging squad would be urged on by the combined efforts of a Senior Officer, a Commissar and a Medic...we'll see how well that plan works out.
The infantry would be protected on their way by a BA-6 Armoured Car and a frankly monstrous (at this point of the war) KV-1. 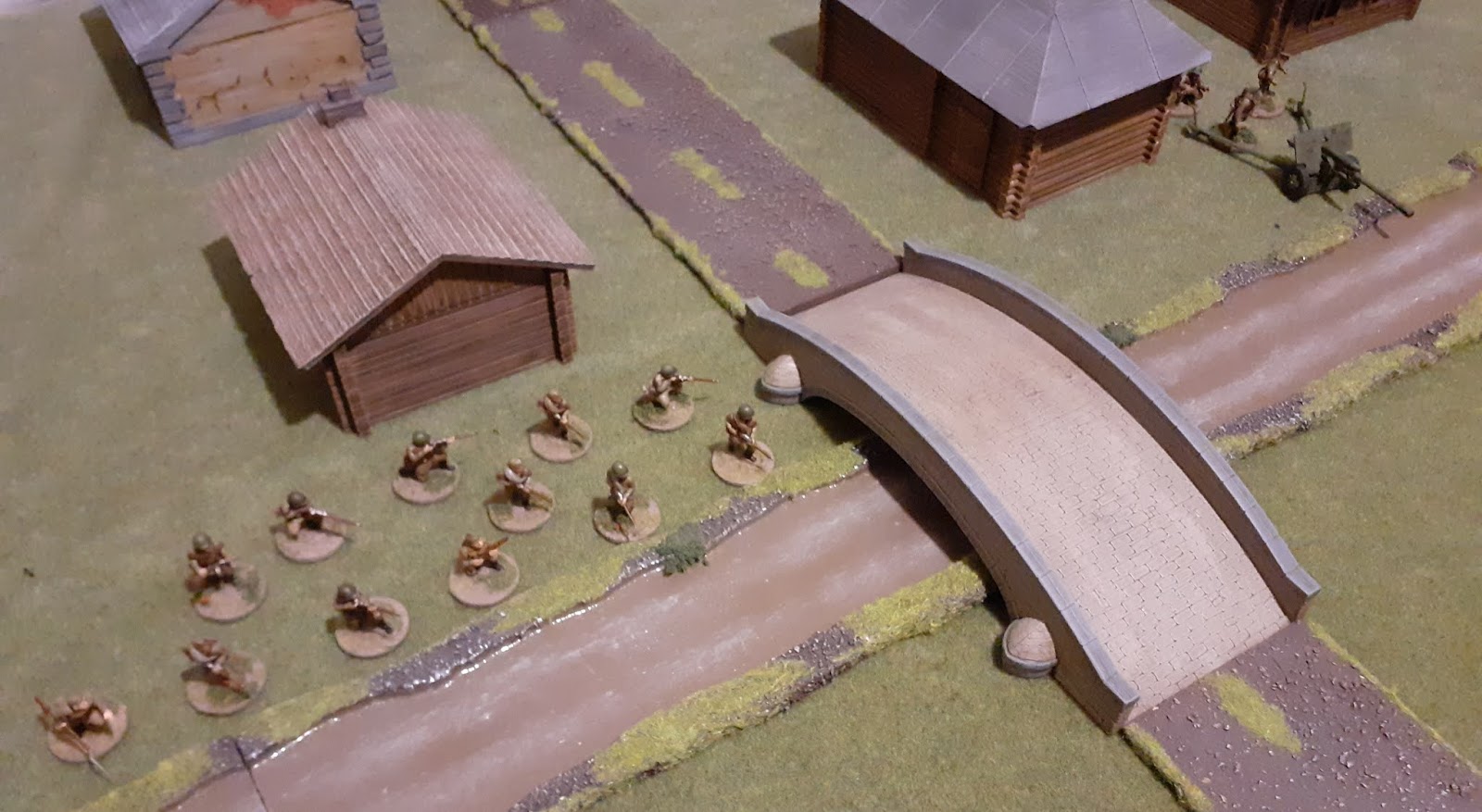 Meanwhile, the bridge to safety would be defended by a (poorly positioned) ZIS-3 anti-tank gun and an inexperienced Rifle Squad. 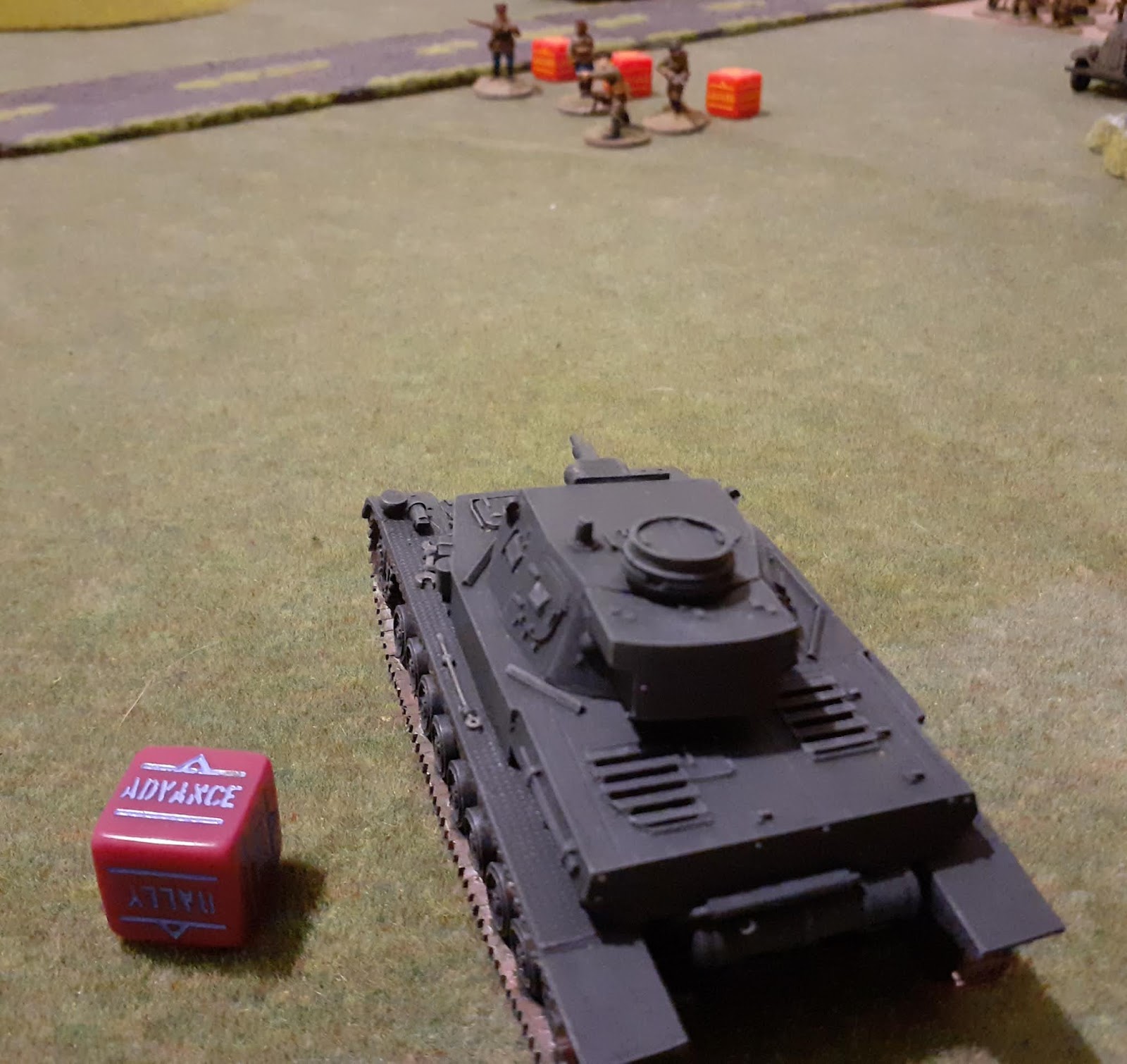 The battle opened with the truck racing off down the road and reaching the bridge immediately.
Unfortunately, the infantry on foot were not so lucky, as a Panzer IV trundled into view and wiped them out. 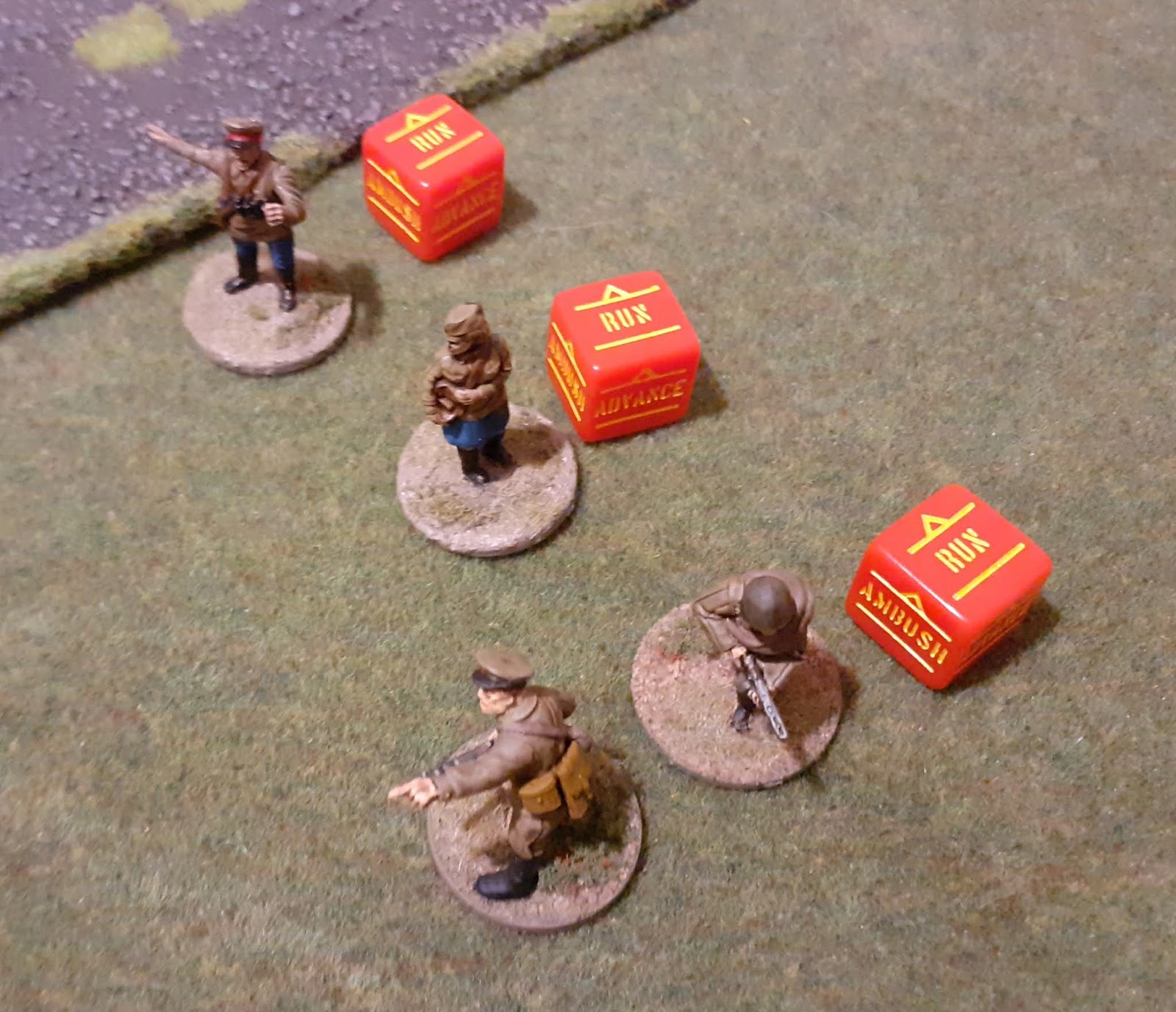 So much for the plan. 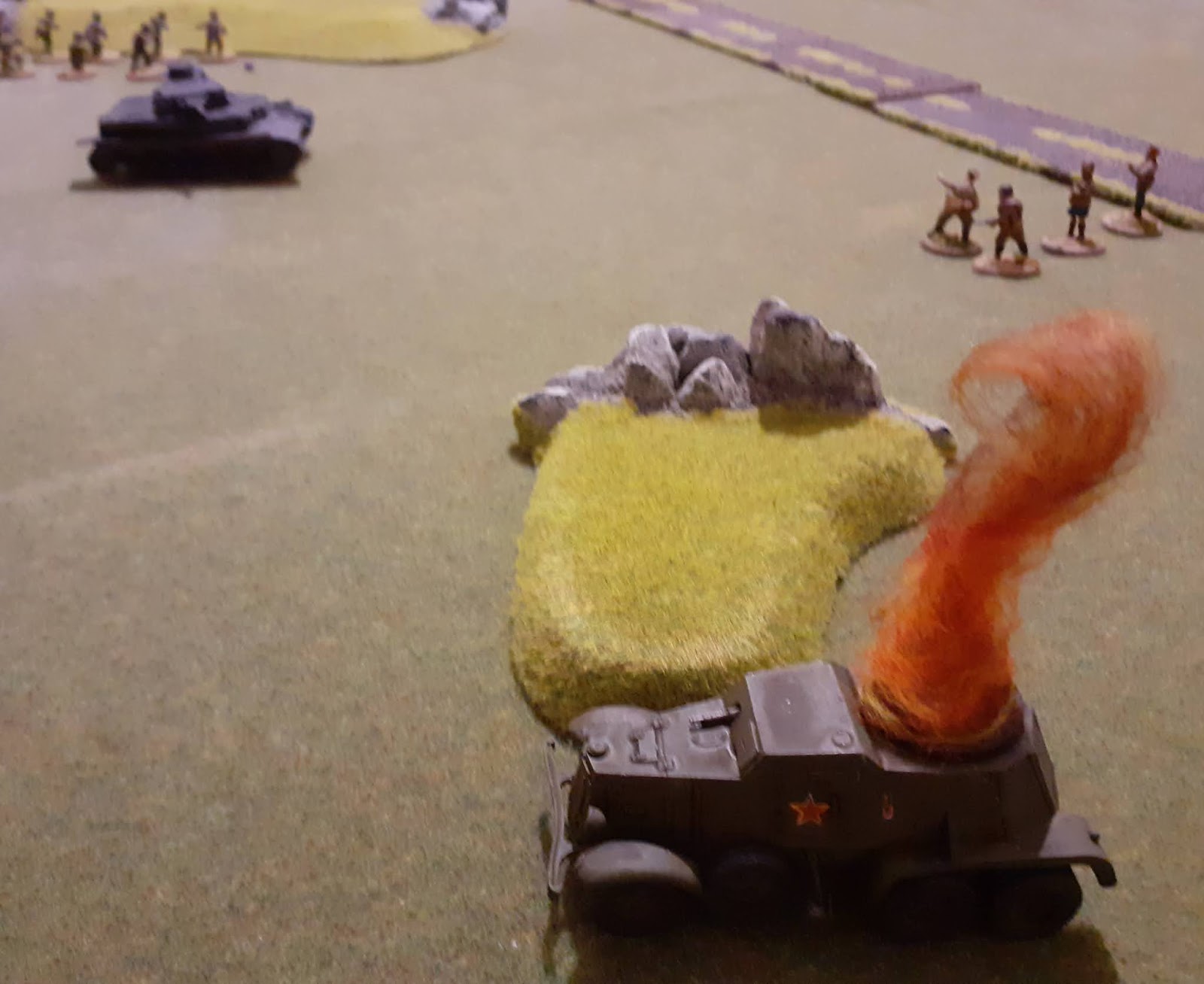 Shoddy accuracy from the Soviet armour asaw the BA-6 meet its doom at the hands of the Panzer IV, it perhaps shouldn't have veered off to kill a German anti-tank rifle team. 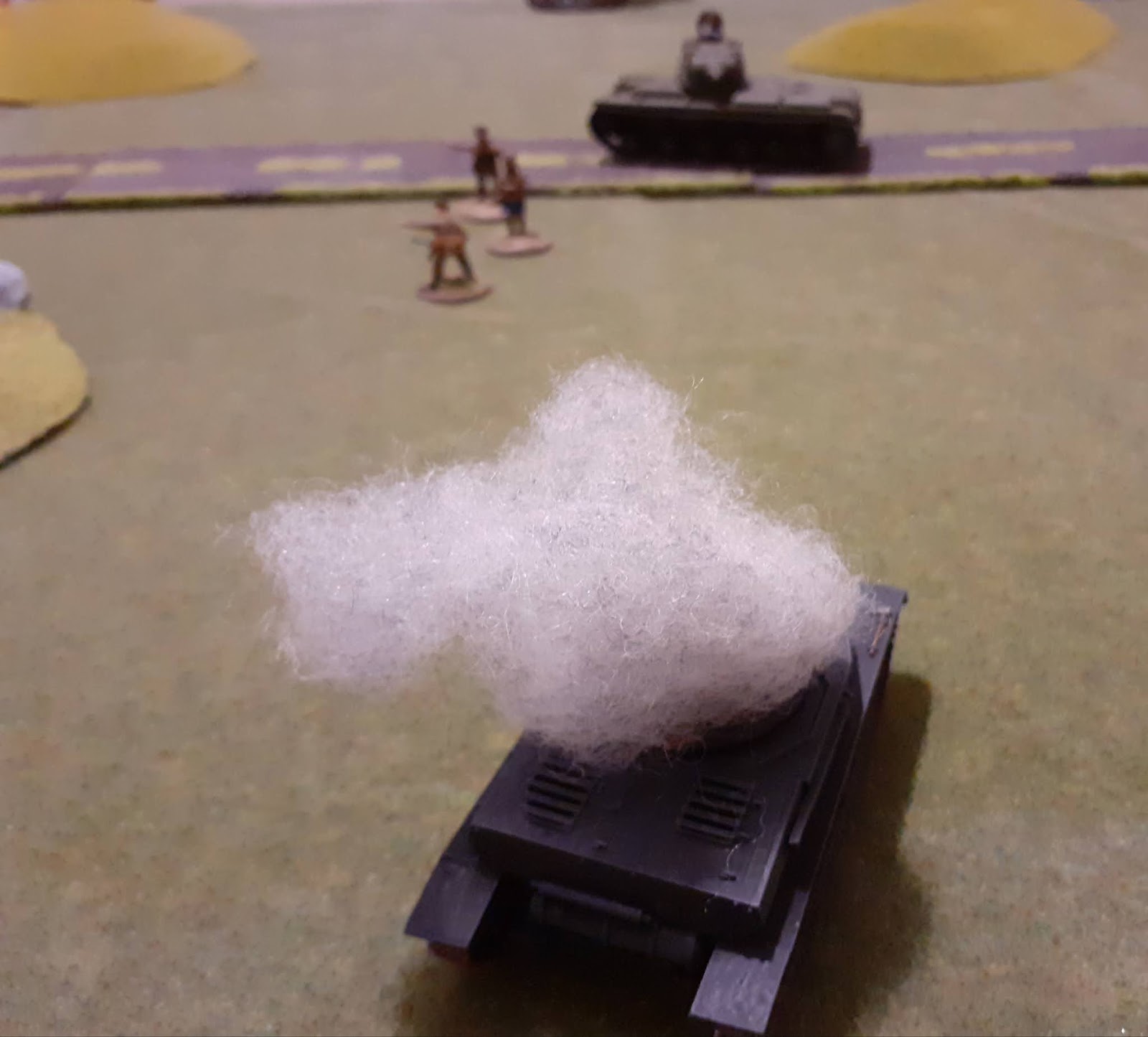 However, the commander of the KV-1 found his range and destroyed the Panzer IV, albeit a little too late.
On the plus side, this removed the only serious threat to the KV-1, which would be able to throw machine-gun fire in all directions for the remainder of the battle.

Near the bridge, despite the reinforcements from the truck, the Soviet defenders were finding themselves hard pressed by Germans swarming in from all sides.
The ZIS-3 managed to get only a single shot off before a squad of Pioneers gor past its gun shield by taking advantage of the fact that I'd not used the buildings to guard its flanks.
The Germans looked poised to to seize the bridge. 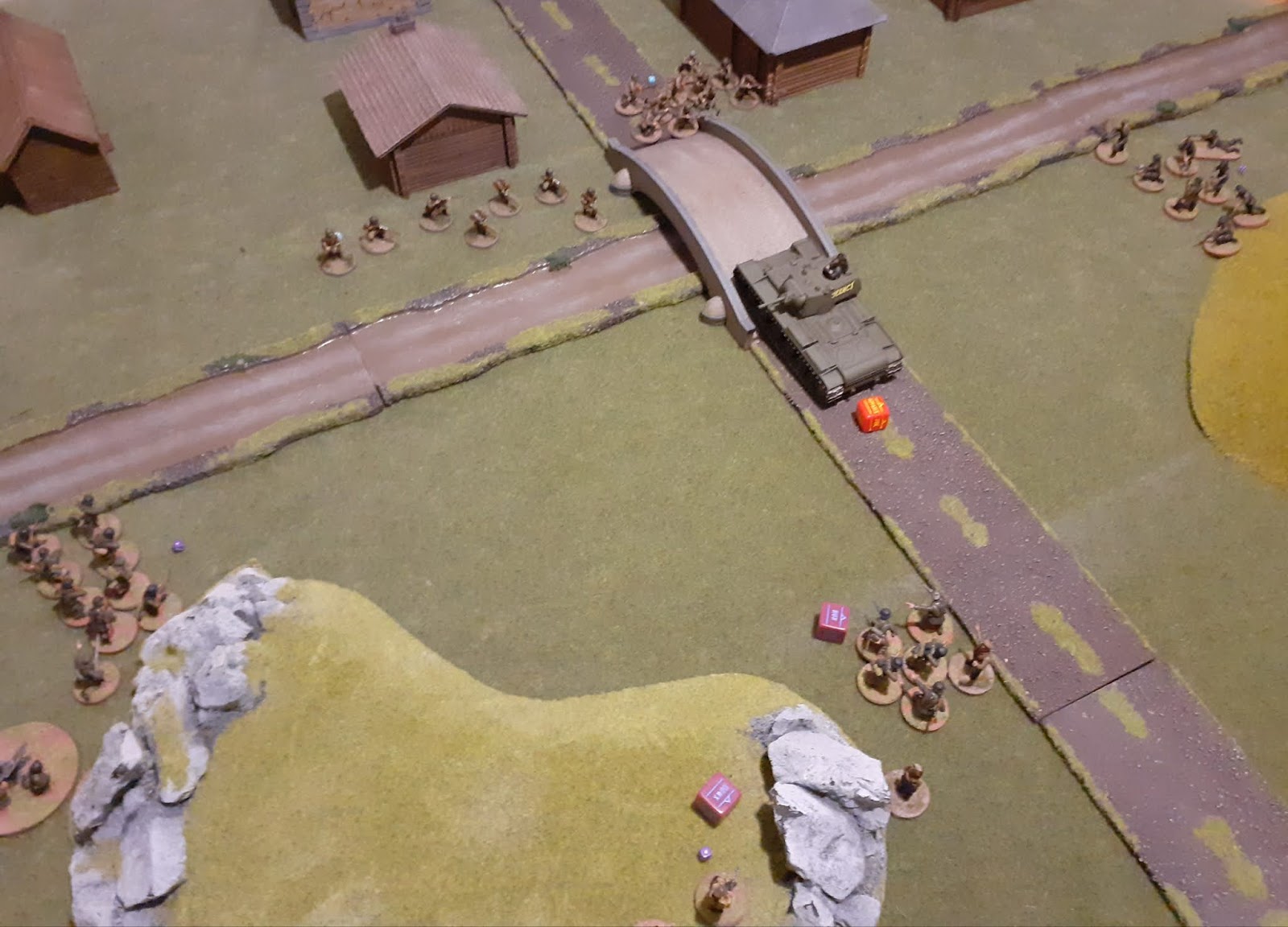 But the German hammer never fell as two things happened. Firstly, the KV-1 made it to the bridge and began putting pins on units all over the place.
This then compounded what was one of the worst run of orders tests from Pete I've ever seen. The Germans had been halted. 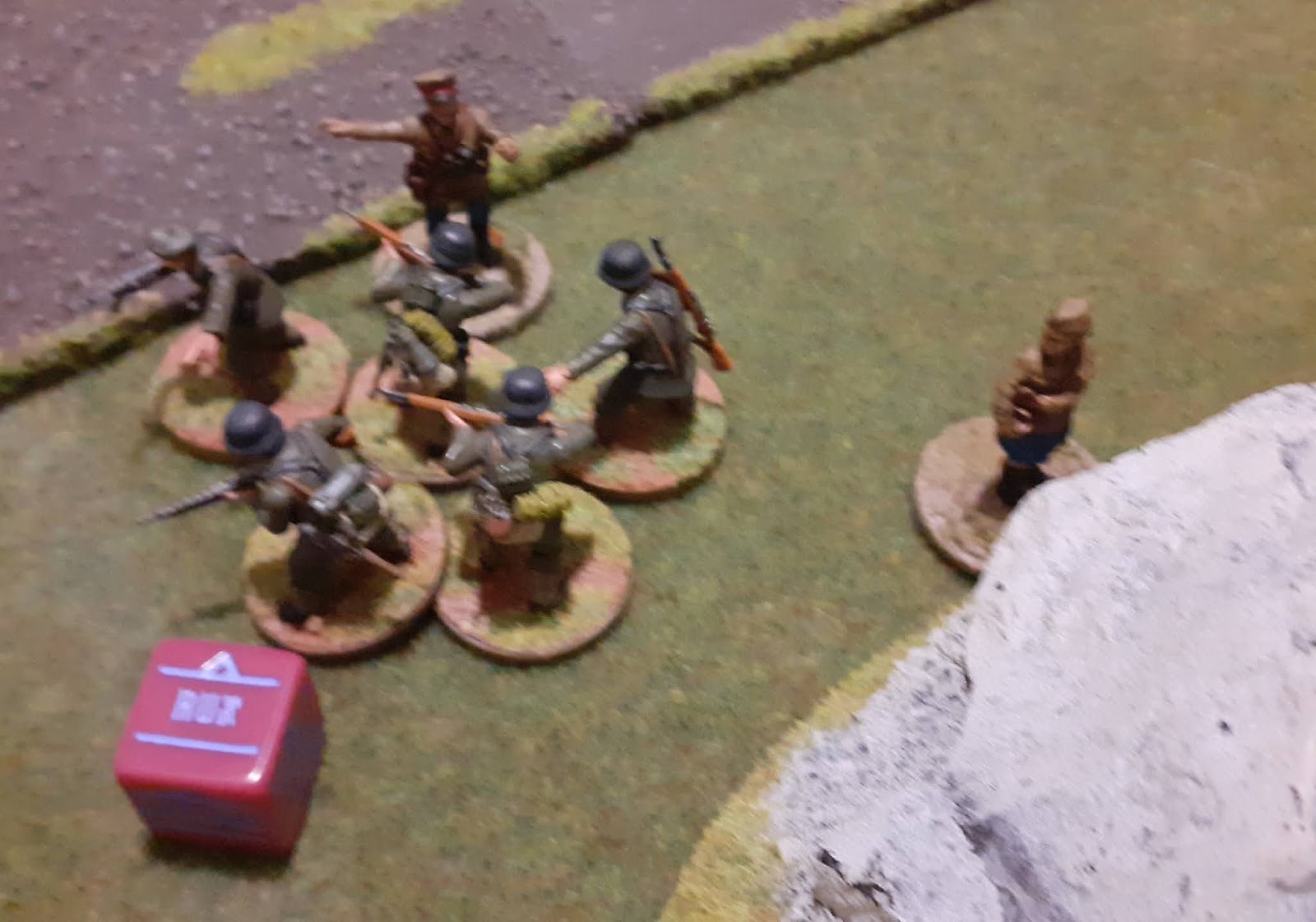 Unfortunately, the Germans didn't need to take the bridge to win, they could simply destroy units, and my HQ were looking vulnerable.
Despite a FUBAR from the German Officer, my Commissar and Officer were cut down in short order. 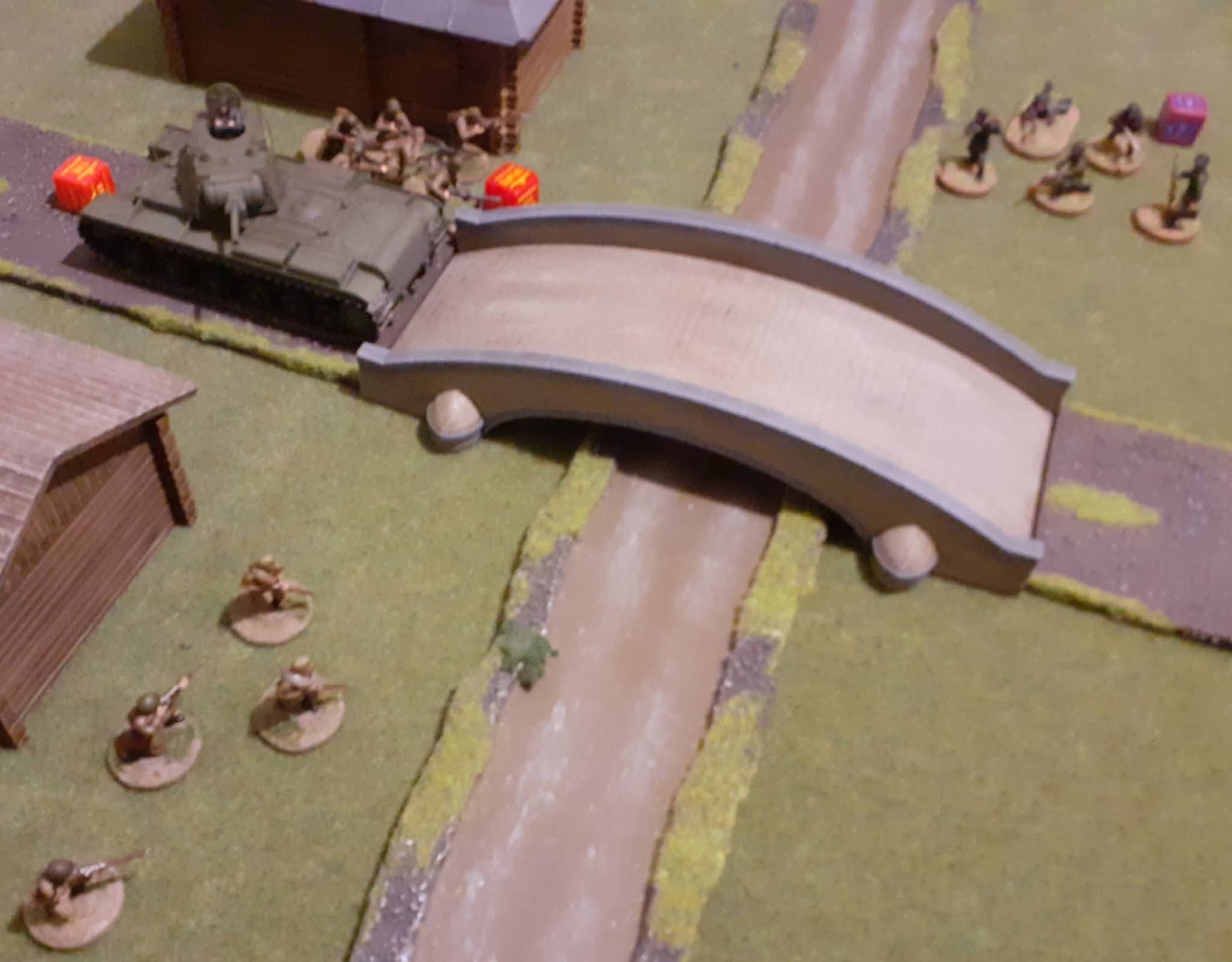 The KV-1 made it over the bridge and Soviet fire thinned the enemy some more as the fuse to blow the bridge was lit.
The way the scoring was arranged, I just needed no more units to die. 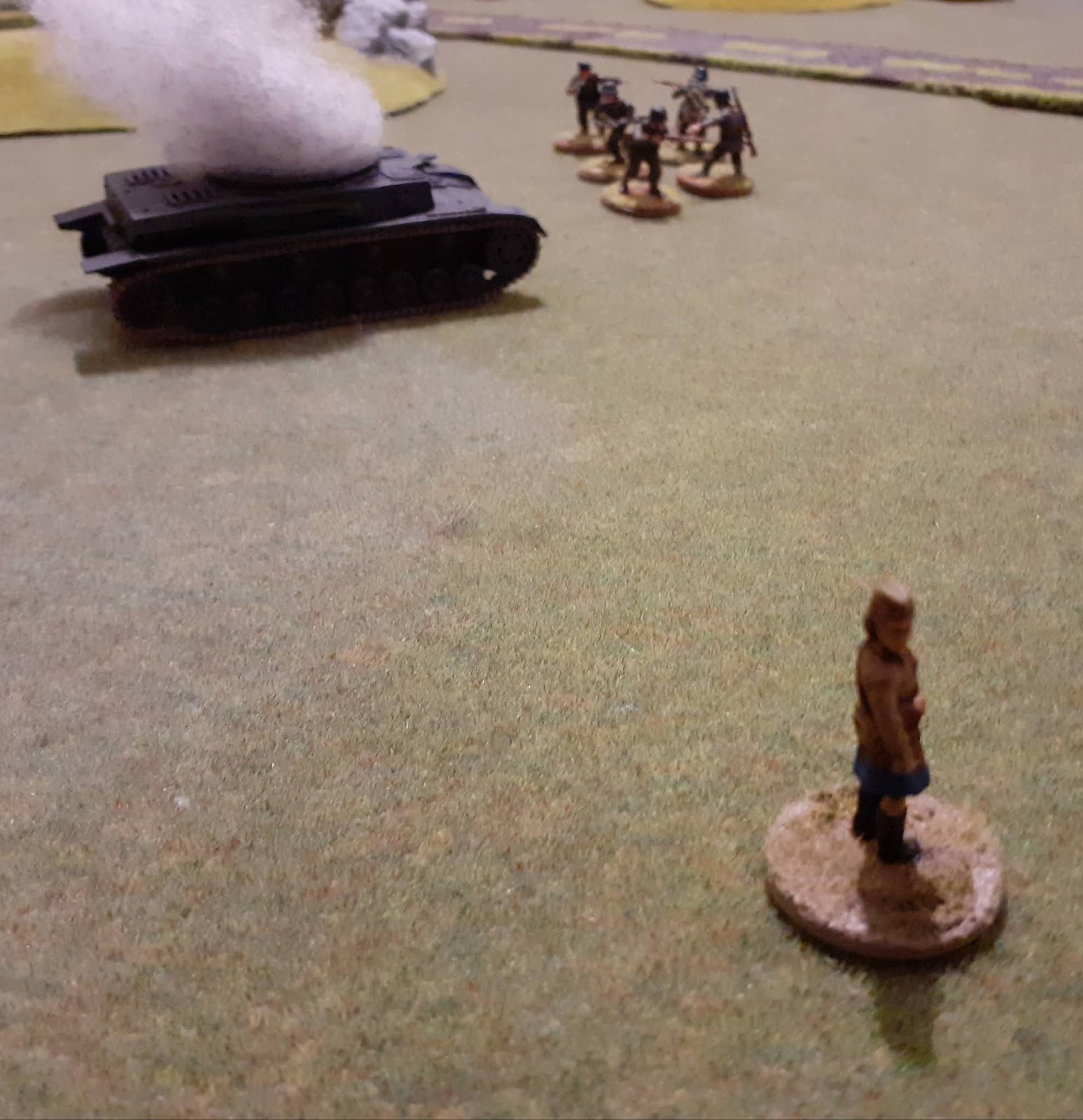 Unfortunately, not only did the inexperienced Rifle Squad finally succumb to incoming fire, but the dastardly Germans broke the Geneva convention and brutally murdered Olga, my unarmed medic. 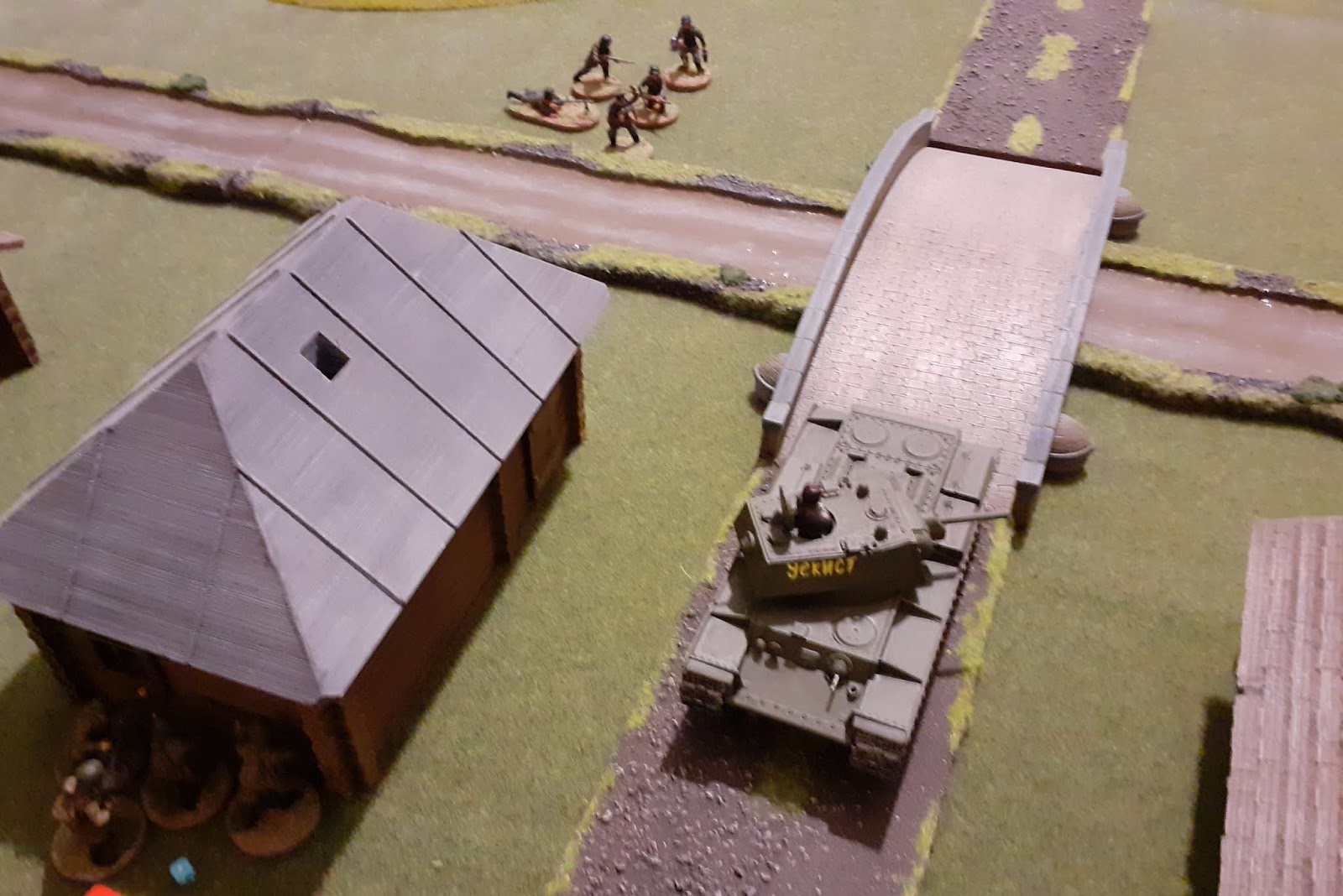 With the KV-1 guarding it, the crossing would be held until the bridge blew up, but a heavy toll had been taken on the Soviet forces.
The final score was 7-6 to Pete.
In hindsight, I made a number of errors early on that caused me to take too many casualties to effectively fight back, and only Pete's appallingly bad orders tests kept me in the game. I'm afraid it's the gulag for me.
In other news, I've bought a Hunter-Killer VTOL toy from Ebay to use in games of Terminator: Genysis and various other bits and pieces for ongoing projects, but things are still in the black.
Acquired: 207
Painted: 239
Posted by Kieron at 11:48 No comments:

More Blood Angel's returned from the dim and distant (and shoddily painted) past. This time it's my Terminator squad. 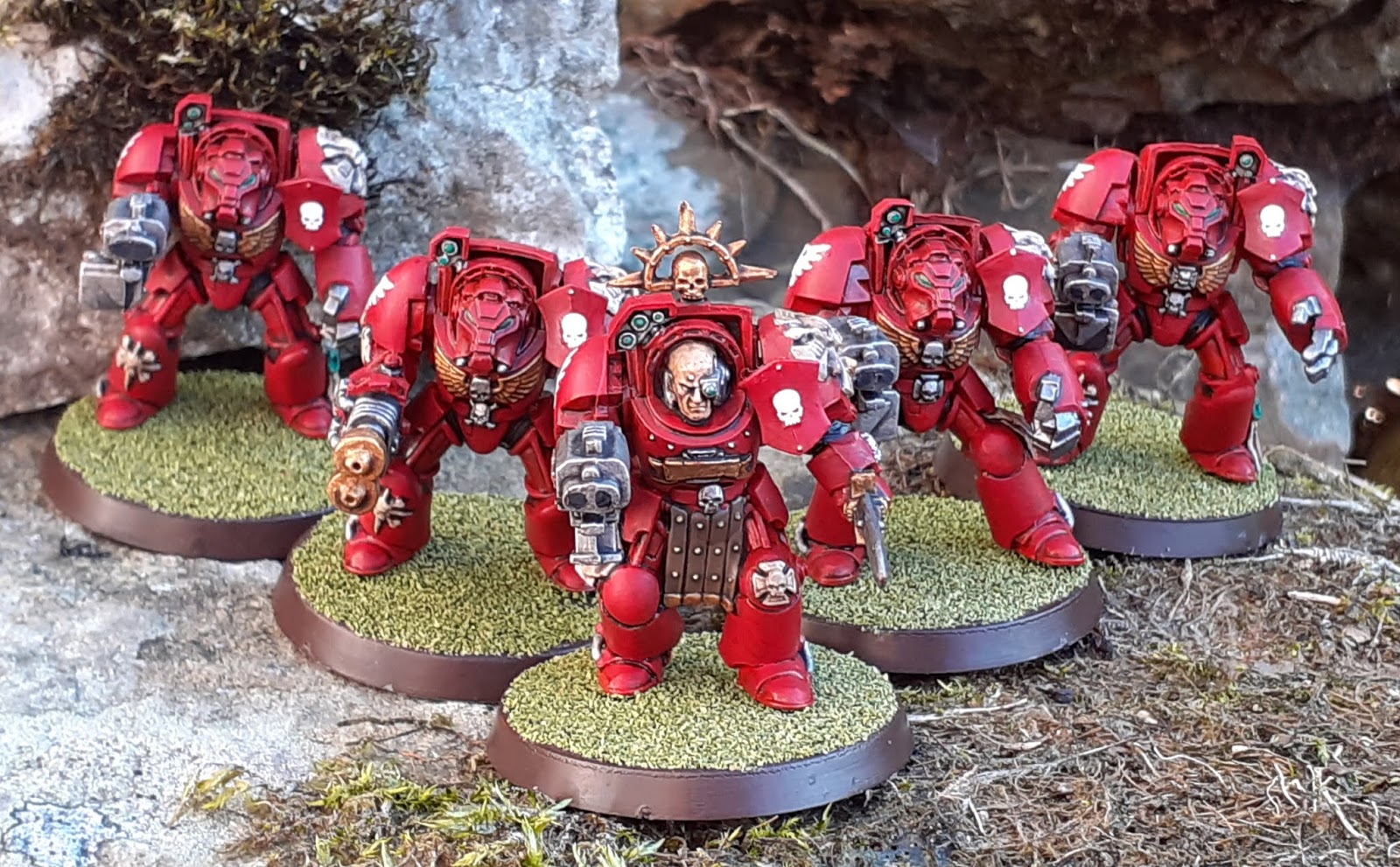 These chaps came in the Battle for Macragge starter box and were easy build, snap fit models. I could swear I got one off the front of White Dwarf, but didn't use him in the squad. These were really quick to do in comparison with the other units as the painting was less ropey. I think the 'chuck black ink at it' approach was better served with the design of these guys. So this was mainly a case of tidying the flat surfaces, touching up the details and adding a couple of transfers.
Admittedly, the bases are still boring, but that's a problem for another day. 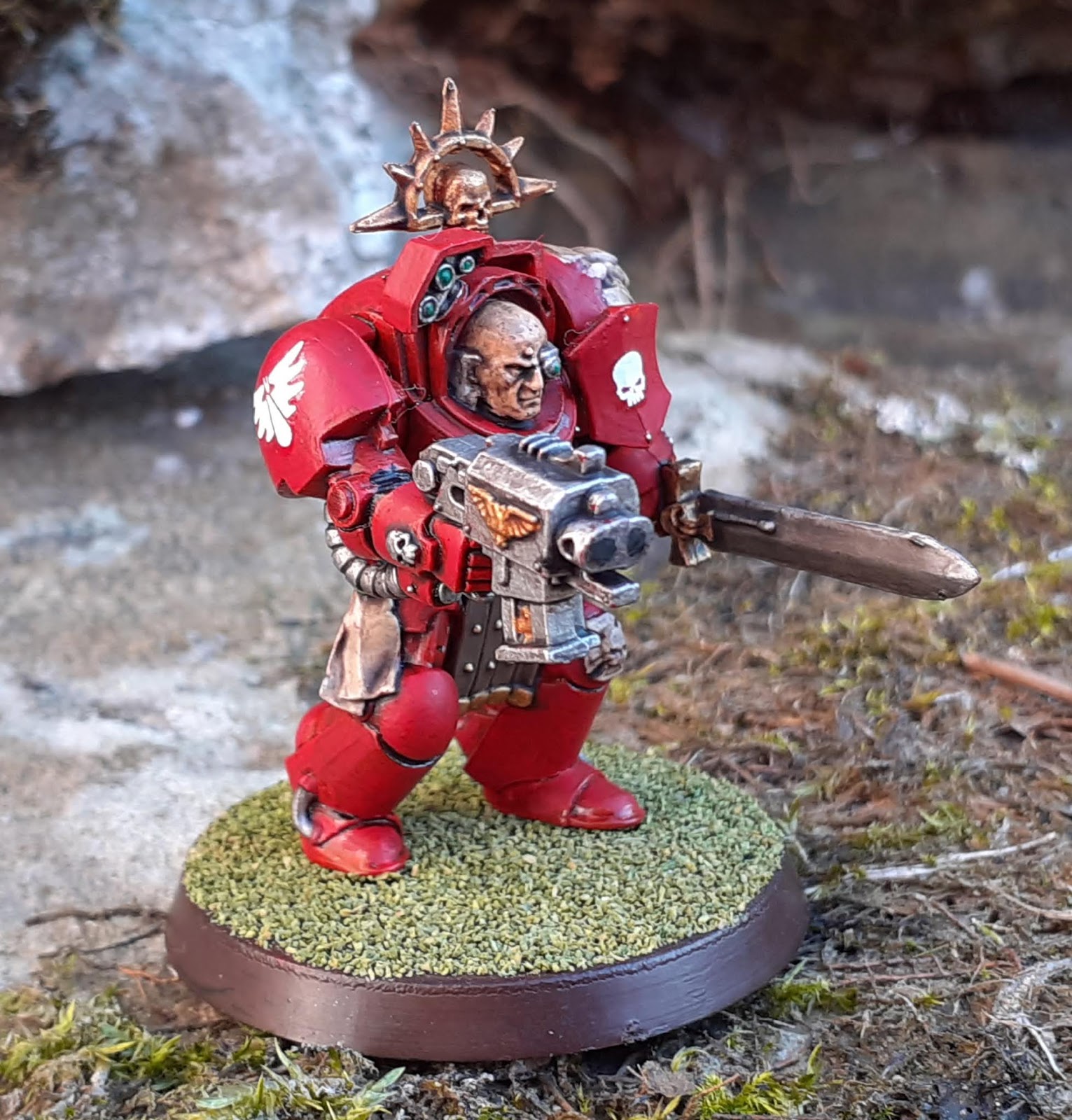 On the subject of transfers, I've made the decision to go with white chapter badges rather than the usual black. This is because a little label on the transfer sheet said the white badges were for veterans, and as the Terminators are all from the veteran 1st company, this made sense.
The skull on the front plate is also the company insignia of the first company. I feel that these bright white details help these elite troops to really stand out from the rest. 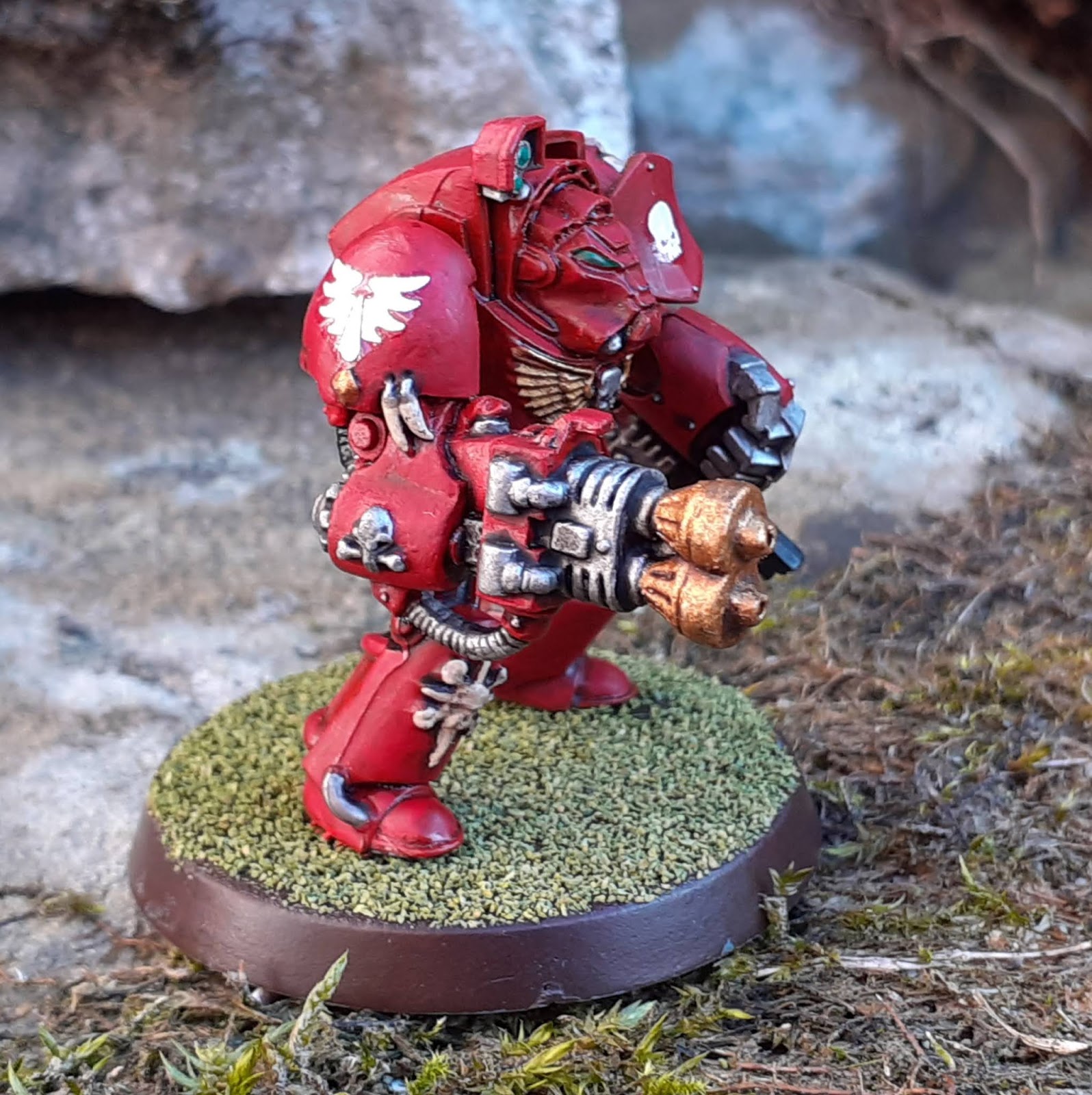 Although the Macragge Terminators only came with storm bolters and power fists, I managed to budge together a heavy flamer by picking up a spare metal arm from the bitz drawers in my flgs.
Technically, it's a tiny bit smaller than it should be (you can see it if you put the pads of another Terminator next to it), and the arm actually belongs to a Space Wolf (hence the two teeth and wolf skull emblem), but I think it works. 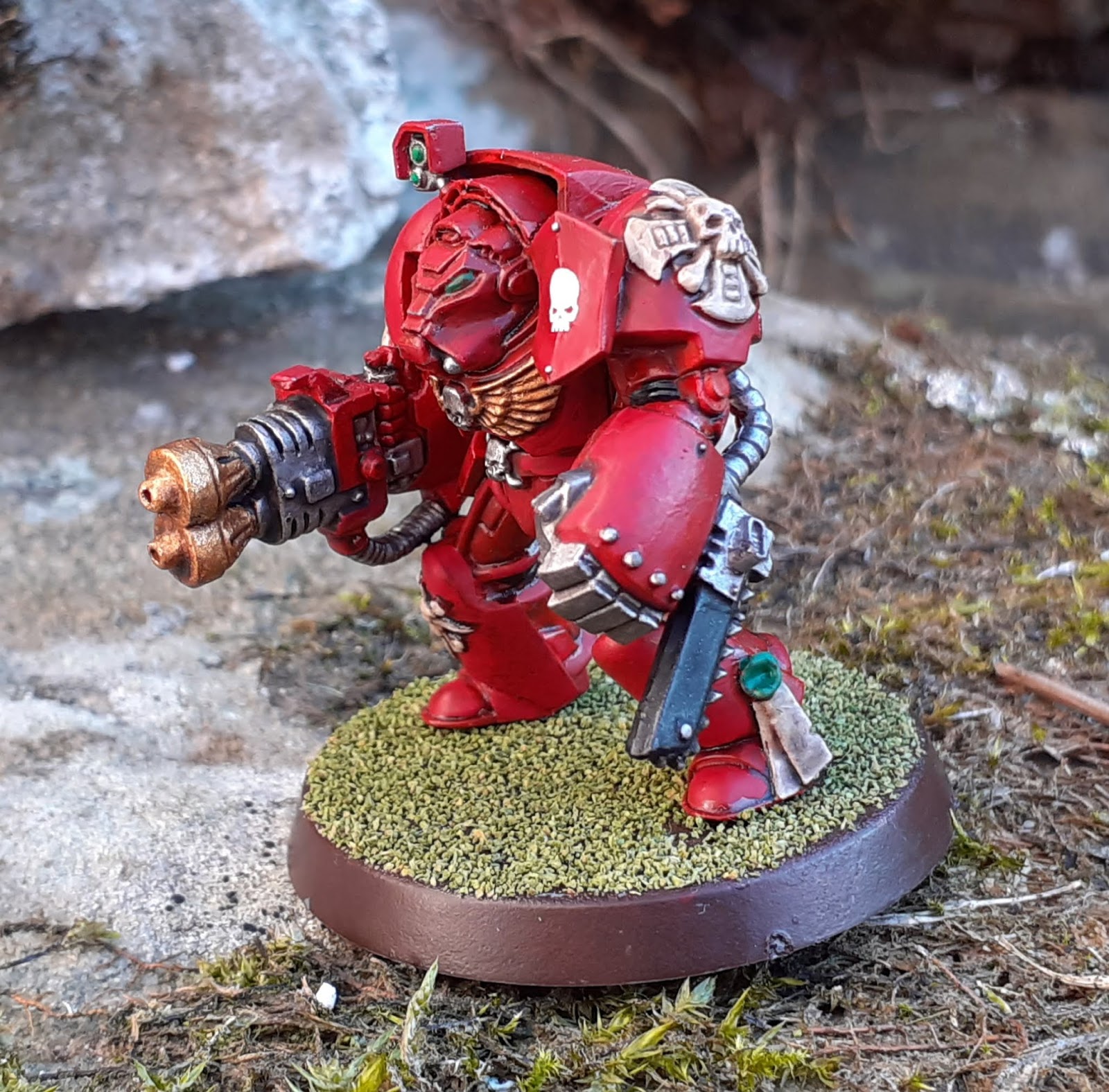 Back in the day, I also kitbashed a chain fist by strapping a cut down chainsword to his power fist. I still think it works...just.
That's another five down. 16 to go.
Acquired: 194
Painted: 239
Posted by Kieron at 13:42 4 comments:

I appreciate it's been a couple of weeks since my last post, but I hit a bit of a painting block whilst continuing to work on sprucing up my old Blood Angel's army, specifically the vehicles. 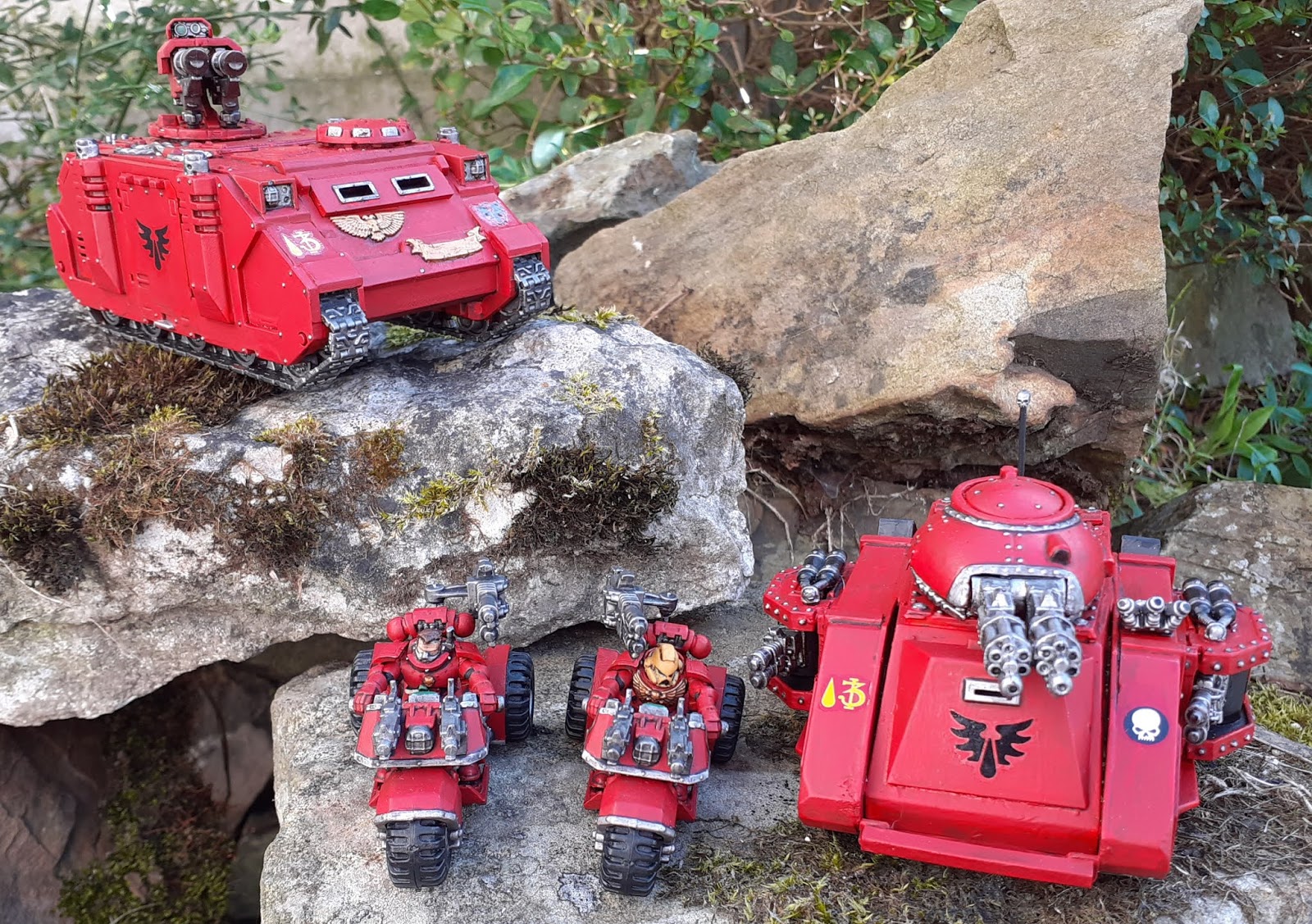 It wasn't too with the models themselves, in fact they were much easier to do than the infantry. I just lost motivation, possibly because I'm now back at work and my mind was on other things. However, I've managed to get over the hump and finish them off, leaving just a few more squads of infantry to do. 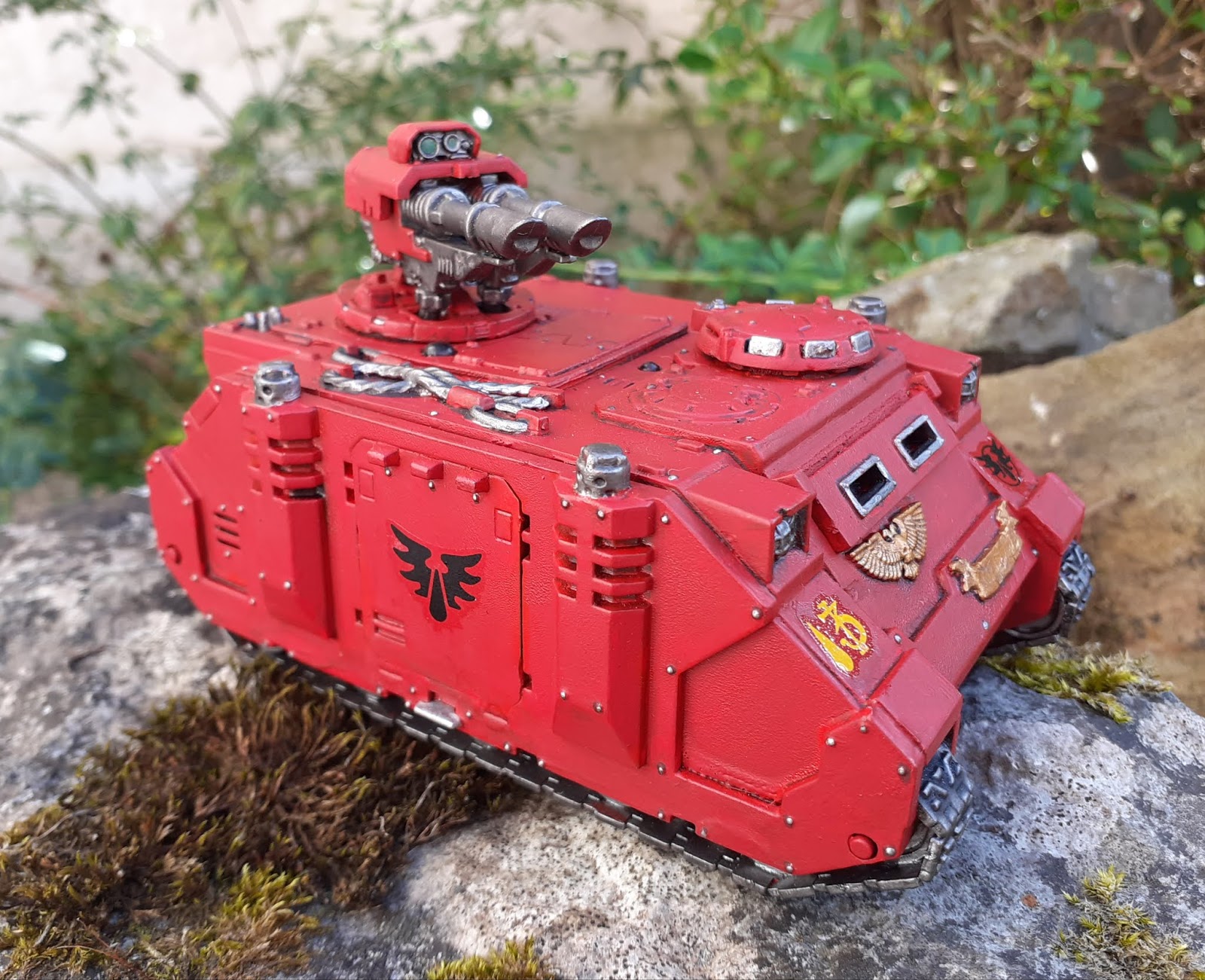 The Razorback is my second transport. Probably destined to carry my Veterans, when I get to them, as it doesn't have the capacity for a full Tactical Squad. The Twin Lascannon should give enemy armour something to think about too. 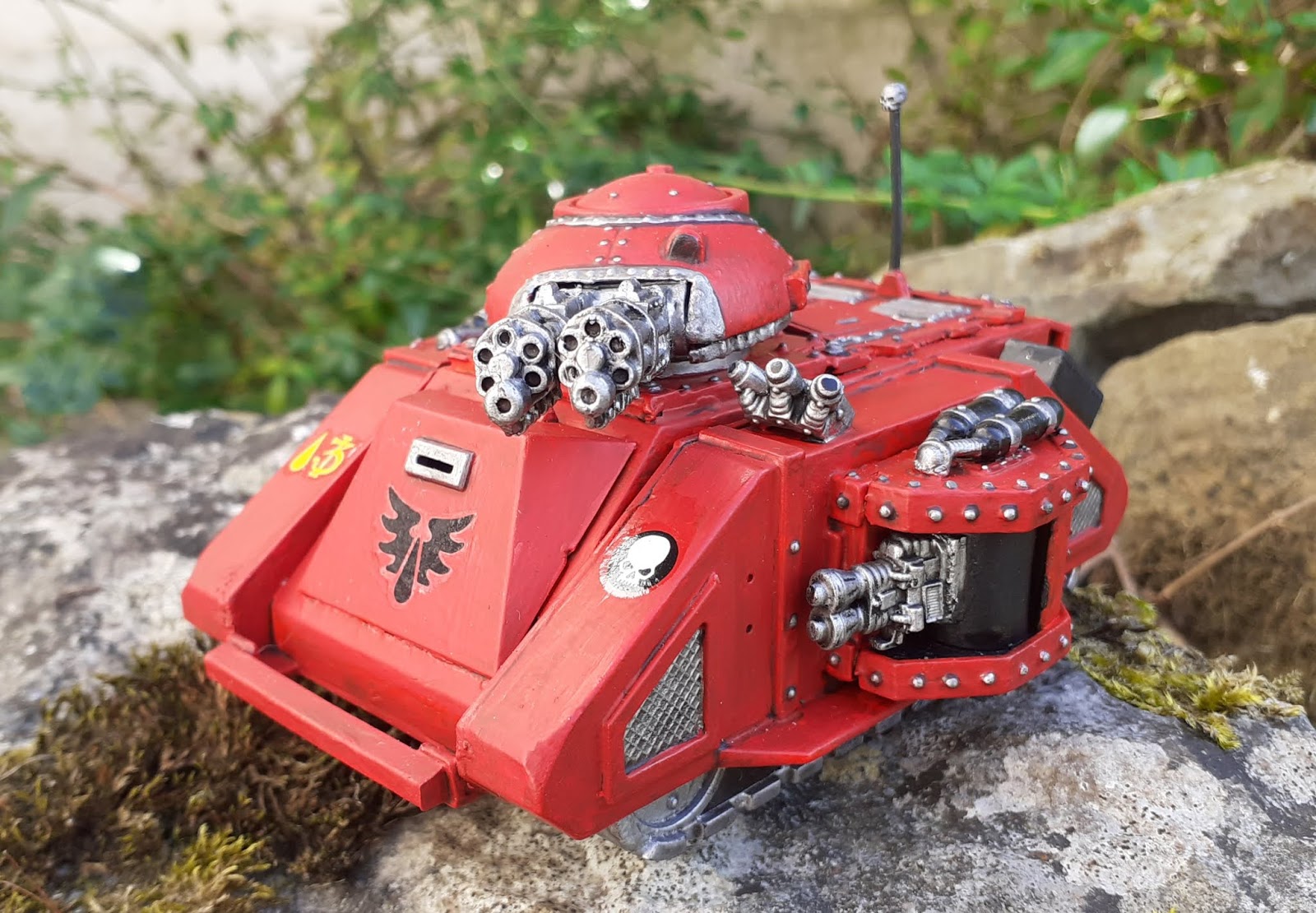 My Baal Predator is the really old version (in fact, I think it was oop when I bought it second hand). It's set up for anti-infantry duty, with twin-linked autocannons in the turret, backed up by heavy flames in the side sponsons. 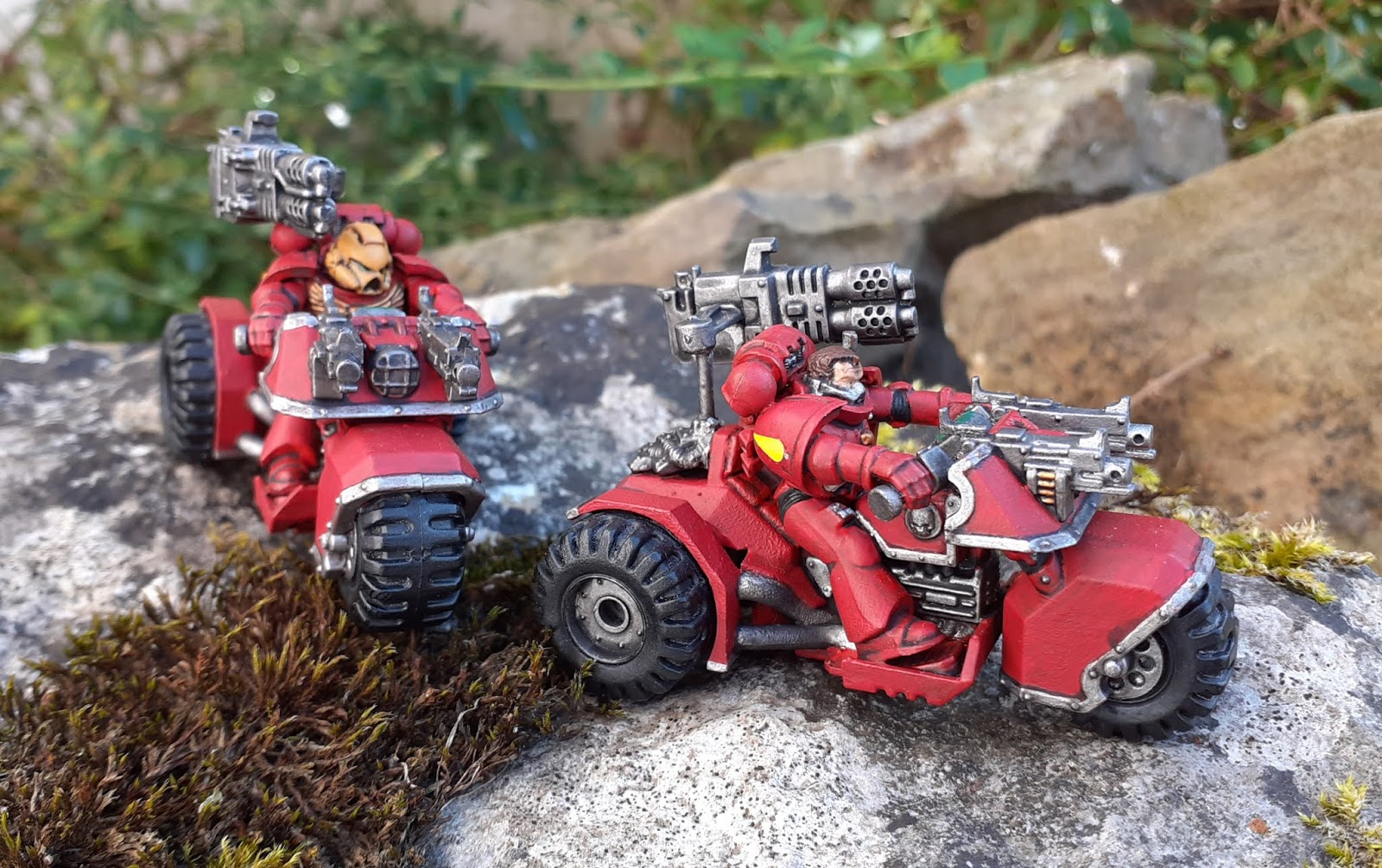 My Attack Trikes are models I converted from a box of bikes and my bits box, because it was cheaper than buying two Attack Bikes at the time. They are good for getting up close with their multi-meltas and turning tough targets to slag.
As well as finishing these four models, I've also managed to sell a chunk of old Batman Heroclix which I bought before I got into BMG. So, despite the hiatus, a significant rebalancing has been achieved.
Acquired: 194
Painted: 234
Posted by Kieron at 08:01 2 comments: