"Ya cannee change the laws of the campaign, Captain!"

In our Attack Wing campaign, we've been finding the rules a bit too fiddly for a four player campaign. Keeping up with which ships, captains and crew were used in each individual game has become too much of a chore to keep up with. Therefore, I'm simplifying things in the following ways:

With this in mind, this is the current state of play in terms of availability:

And here's the current map: 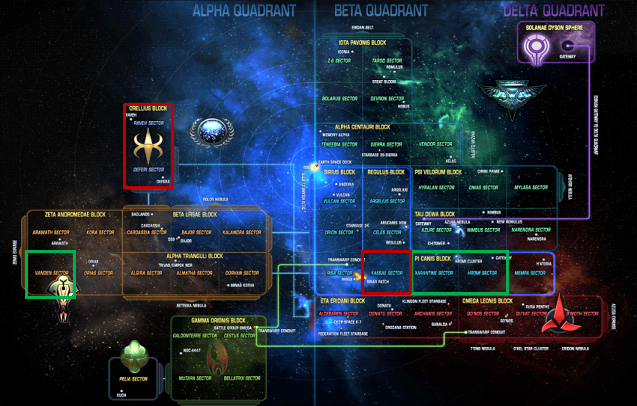 As you can see, the Romulans and Klingons have been making hay with the Dominion and Federation still struggling to cope with their cloaking. Matt's Federation have managed two wins, but not succeeded in capturing a sector, whilst my lowly Dominion have still to win a campaign game. Both fleets have been reinforced, and hopefully the change in rules will make us feel more able to use our big hitters to even the gap a little.

If things are going to improve, it has to happen quickly as Pete's Romulans are within striking distance of their objective - to control more space than any two factions put together.
Posted by Kieron at 08:36 1 comment: