A Feast For Craig

Thursday saw my second attempt at the Feast For Crows scenario from the Saga rulebook. This was also the first time my newly painted Viking warband would see action (I'd finally got them all done bar a few shields, eyes and the basing of the entire warband). My force consisted of my Warlord, 1 unit of 12 Hirdmen, 1 unit of 4 Berserkers, and 2 units of 8 Bondi. Small, elite and packing some punch. 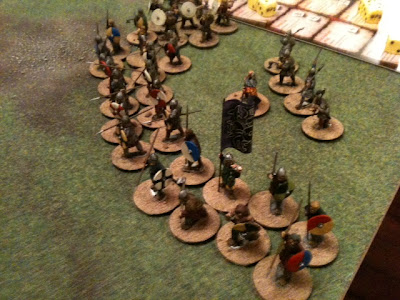 Given that last time I'd got stuck in early, taken a beating and then been mopped up by some late arriving Vikings, I had promised myself that I wouldn't be too eager to get stuck in, but would let the others knock chunks out of each other and then go for a late rush to win...we'll see how well that went...
As for the 'others', they were, in clockwise order from me: 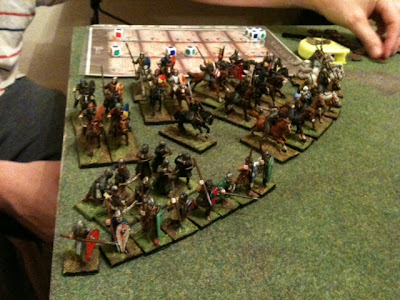 Kelly's Normans. Warlord, 2 units of 4 Knights, 2 units of 8 Mounted Sergeants, 1 unit of 8 Crossbows and 1 unit of 8 Foot Sergeants. These models were borrowed from Tom, but Kelly is building a Warband of this composition in time for the tournament and this was his first outing with them. I thoroughly expected these to come thundering down the flank towards me as I was the nearest target and a large building 'blocked' the route to Andrew's force. Which leads me to... 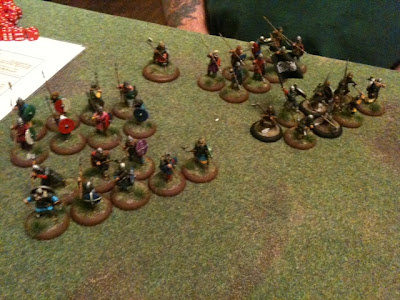 Andrew's Vikings. Andrew was trying something different to his usual set up and fielded an elite heavy force of a Warlord, 2 units of 8 Hirdmen, and 2 units of 8 Bondi. As I mentioned, his flank was protected from Kelly's cavalry by the big feast hall, and so I (and probably the others) expected him to focus on... 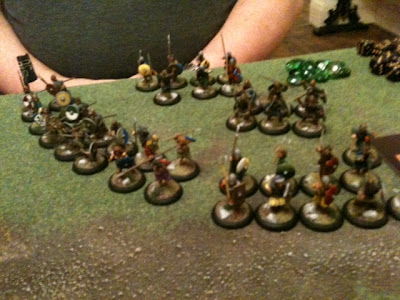 Craig's Vikings. With Vikings on either side of him Craig knew that he would have to present a defence on both flanks and hope that we didn't both come for him as the same time. However, he had subconsciously taken steps to even the odds and fielded a warband of: a Warlord, 1 unit of 10 Hirdmen, 1 unit of 6 Hirdmen, 1 unit of 4 Berserkers, 1 unit of 10 Bondi and 1 unit of 6 Bondi. Yes, you are reading that correctly, it's 7 points! To be fair even Craig didn't notice this until the end of the game, however, I'd be lying if I claimed it had no effect on the outcome...
The game began with opening move as everyone jockeyed for position. Aware of the mobile hitting power of the Norman Cavalry, all the Viking players leaped towards the buildings. I managed to get my Bondi into a thatched hut to my left and position my Berserkers behind it. This way, if Kelly sent cavalry at me he'd either have to attack my Bondi in the building and get jumped on by the Berserkers or charge the Berserkers, get mauled and then clobbered by a sally from the Bondi. The prospect of this, and a dice roll that exposed some of the same deployment issues I had faced the previous week, served to hold the Normans back.
In fact the Normans were so caught up with repositioning themselves that a unit of Mounted Sergeants were caught completely unaware by some of Andrew's Hirdmen leaping out of the Feast Hall to give them a good kicking. I'd seen this coming and, as part of my 'plan', I had played Ragnarok which lowered everybody else's armour by one. I sat back and prepared to watch them kick seven shades of sheep out of each other. 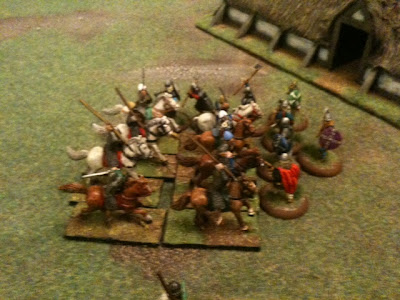 The Vikings won but we immediately set upon and mauled by a combination of Crossbows and Cavalry (wasn't that an MB Game back in the day?). "This is good," I thought (have you spotted my tactical error yet?), in fact I thought it so good that when I rolled another double six the next turn I decided the Ragnarok again! Just in time for Craig to decide to get in on the action and exploit Andrew splitting his forces by charging his Berserkers into 8 Hirdmen. Somewhat suicidal use of Frigg and Valhalla saw a lone Berserker model delivering 26 attacks and wiping out two points of Hirdmen for the loss of one point of Berserkers. Meanwhile Andrew's other Hirdmen were finally killed by the Normans after mauling another unit of Mounted Sergeants. 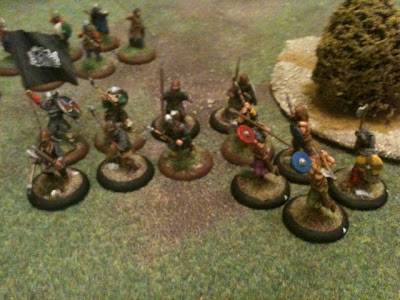 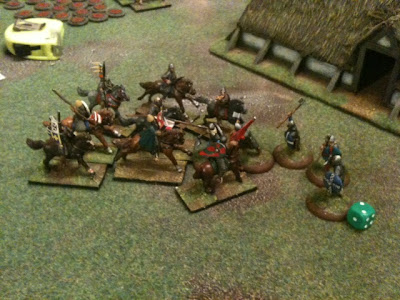 You've spotted it haven't you? To be honest, it was dawning on me at about this time. I'd been so defensively minded, expecting an assault by either Craig or Kelly that I was now stranded out of the game. Feast for Crows is decided by body count and I had yet to score a single kill whilst not only were the others upping their tallies, I'd used bloody Ragnarok to help them to do it!
TWICE!
Something had to be done, and fortunately, Craig decided to do my thinking for me and assaulted my Bondi with his. He had a numbers advantage and Saga dice loaded and won the fight for little loss, however he did leave himself exposed to a counter attack by my Hird-Horde (I'm copyrighting that name - I was considering 'Hordemen' too). I won but in an exchange that was somewhat reminiscent of chess, he then launched his 6 man Hird unit at me. I eventually won that exchange too but the body count was pretty even. However, the destruction of Craig's left flank units left me with nothing nearby to assault. 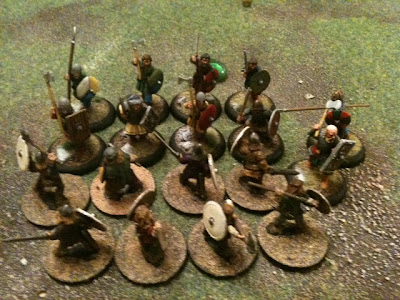 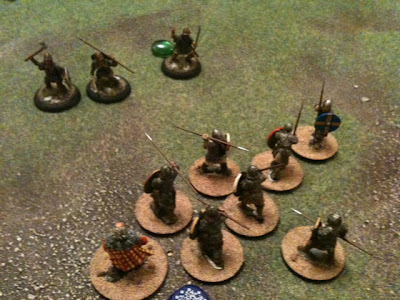 Meanwhile, in another part of town, Andrew decided to repeat the trick he'd pulled earlier and launched his Warlord and a unit of Bondi out of the Feast Hall and into the Normans. After much charging, galloping, intimidating and shooting, the Normans were further mauled but the Viking Warlord stood alone...for a bit...and then was dead. 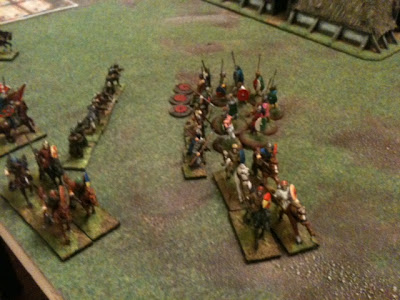 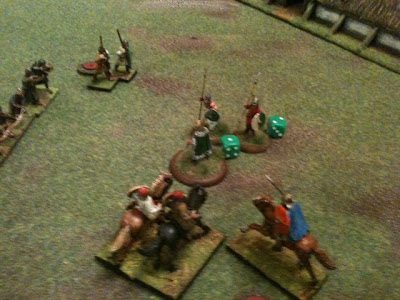 Seeing that Andrew only had a single unit of Bondi left, Craig decided to send his big (cheating) unit of 10 Hirdmen over to console them. Group hugs and calming cups of tea were followed by sharp axes and the Bondi were cut to pieces, although they did take a few Hirdmen with them. Andrew's Warband was dead; however, on the up side, he did get to go home early and win brownie points at home. It's an ill wind that blows nobody any good.
The game was entering the end phase and I was behind on kills and somewhat distant from the action. Kelly launched long range cavalry assaults on Craig's Warlord who, never one to look a gift horse in mouth elected to hack the gift horse's head off and add to his ever growing points tally. I was forced to go for broke and had the dice to launch either my Berserkers or my Hirdmen at Craig's remaining Bondi. I mistakenly chose the Berserkers and despite killing all six Bondi were all killed in exchange. I'd once again given Craig more VP's than I'd gained. 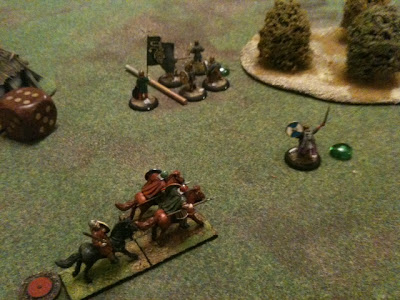 My final act was to attack Kelly's Crossbowmen with the Bondi who'd been hiding...er...garrisoning the house all game. I killed the Crossbowmen, but this wasn't enough to raise me out of last place, despite having the most models left. Craig had most VP's at the end having hacked his way through everybody, but as he cheated I think the laurels should go to Kelly in his first game with the Normans. He withstood an absolute battering from Andrew's Vikings and then countered effectively. 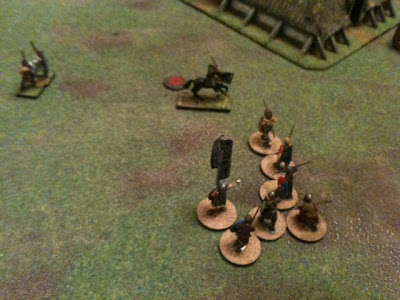 So, what have I learned?
My next game of Saga is next Sunday at the Winter is Coming tournament. With any luck I can handle myself better. This week features a lot of rushing to complete the warband and constructing three baggage markers.
I've also got a game of WAB against Trev. Busy, busy, busy...
Posted by Kieron at 03:58