With no warning at all I've found myself buying 7th Voyage from Crooked Dice and beginning a solo campaign charting the heroic journey of the young Altheus (nerd points available for getting the reference) as he grapples with his heroic legacy and battles nefarious villains and stop motion monsters along the way.

The idea came from a combination of some excellent advice I read online about solo wargaming, a hankering to try out Crooked Dice's rules, a Greek army sitting unused since the demise of WAB and childhood memories of Ray Harryhausen's fantastic creations.

Legacy of the Gods - Episode 1: His Father's Son

The episode opens with a young warrior (Altheus) knelt before a statue of Ares, the God of War, in a ruined temple. After a moment, Altheus stands and moves what remains of the doorway. He pauses, and turns to look at the statue again before he speaks.

"Still you give me no word, no sign grandfather."

He turns to go, but the camera lingers on the impassive face of the statue. 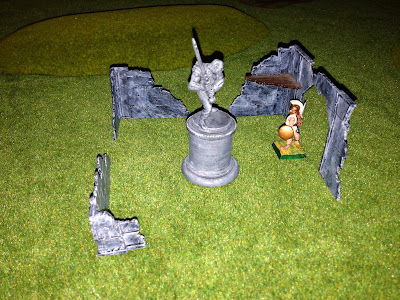 Cut away to a hill overlooking the ruined temple. A motley assortment of Thracian bandits look down towards Altheus leaving the temple.

"Take him," sneers the leader. 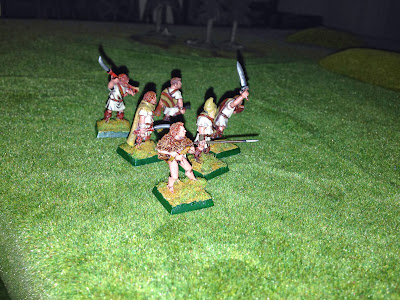 The scenario I chose for my first game was a small skirmish between Altheus, a Favoured Champion who'd traded the Insprational special effect for Shield, and a group of five Mercenary extras accompanied by a single Psiloi wielding a sling. Despite my attempt at random deployment for the villains using scatter dice, the villains were clumped together at the edge of the table.

The villains gained initiative and immediately rushed forwards. I decided that in the campaign, all villains would have a 'script' which would govern their movements. The Thracian Mercenaries would always move directly towards the nearest enemy, whilst the Psiloi would do the same, unless the opportunity for a clear shot could be gained. 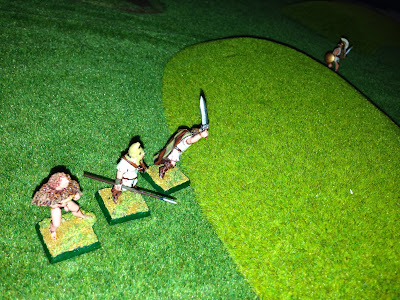 The Thracians continued to gain the initiative round after round, and Altheus soon found himself under fire and beset by assailants on all sides. Despite his ability to Parry and his Shield, I quickly burned through the event cards (none which were directly useful as anything other than a modifier) just trying to keep Altheus in the fight. 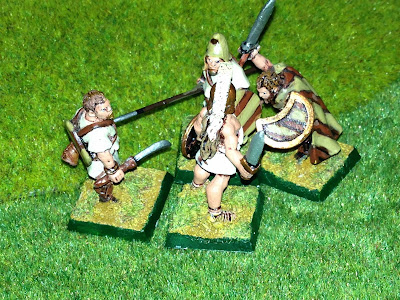 Amidst the flurry of attacks, Altheus began to show his prowess, and despite continuing to lose the initiative, two of the Bandits fell to his blade. However, numbers told and with the event cards expended, Altheus was eventually beaten into unconsciousness and captured. 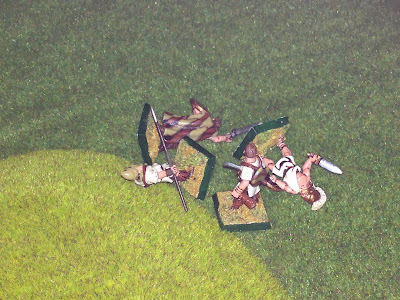 As Altheus' vision blurs, fade to memories of his younger life in Thebes: playing as a child; being stronger and faster than the other children; learning the arts of war and being told of his heritage.

Altheus' mother tells him than his grandfather was one of the Spartoi, the 'Sown Men' of Thebes and sons of Ares, God of War. Altheus resolves to venture to Thrace, Ares' birthplace, to search for his destiny and prove himself to his 'grandfather'.

Fade back to present, Altheus is chained to a wall and beaten by two Thracians. As his rage builds, we something burning behind his eyes and suddenly the tables are turned and the chains fall loose. Altheus uses the chain to quickly disable his tormentors. He grabs his sword, shield and helm and slips away.

Suddenly, a horn sounds and the hunt is on. 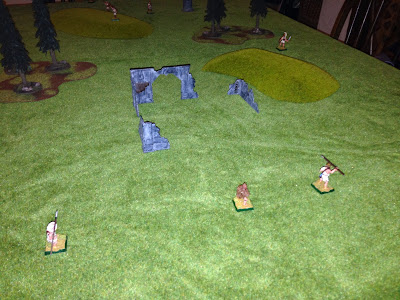 The next part of the story would be the Escape scenario. Altheus would be attempting to flee the table, whilst 5 Mercenaries and 4 Psiloi (1 sling, 3 javelins) would try to stop him.

Altheus luck immediately changed from the first scenario. Not only did he automatically have initiative in the first turn, but the event cards he was dealt were infinitely more useful for the scenario. 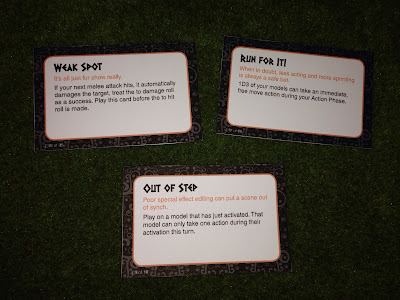 The random deployment of the Thracians also helped as a flank was left weakly guarded and Altheus headed straight for it. Whilst the Thracians rushed to stop him. 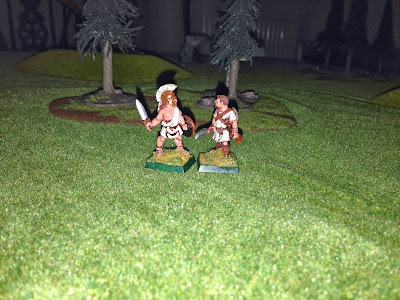 Altheus was immediately confronted by the Thracian that had blindsided him earlier. However, a skillful parry and winning an initiative roll for the first time helped him to dispatch his opponent with little fuss. Something had changed in young Altheus. 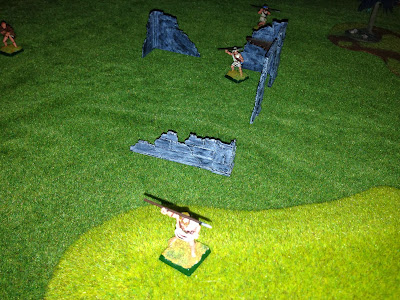 Nevertheless, the Thracians continued to swarm towards our hero. 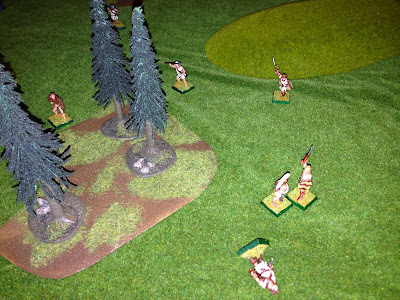 Judicious use of the Out of Step and Run For It! Event cards allowed Altheus to keep one step ahead and take down several Thracians one at a time rather than get swamped again. 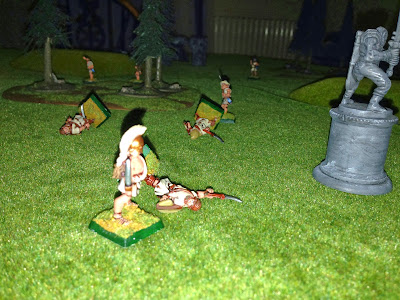 Surveying the damage he had wrought, Altheus notes the advancing enemy and decides that having proved his worth, it was time to leave. 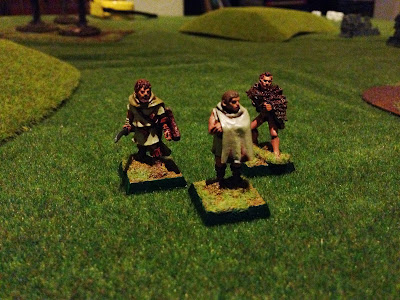 As Altheus disappears over the hill, the bandit leader emerges. With lightning speed he slices the throats of two of his subordinates.

"Failure will not be tolerated. It looks like I must finish this myself. Find him!"


Cut to the ruined temple of Ares, which Altheus has found his way to again. The statue glows and animates as the God of War manifests to speak with Altheus.

"You seek your destiny? It is hidden from me, but you could be a great hero, lay your enemies low and stand alongside Theseus and Heracles. No more running, they come for you. Stand tall and meet your fate like a warrior."

The statue returns to stone and Altheus draws his sword, and walks out to meet his fate. 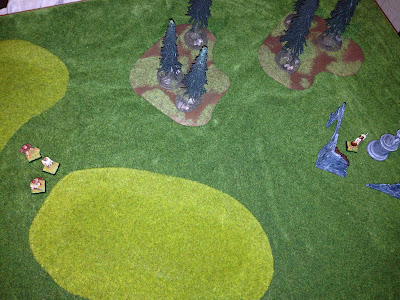 I decided to introduce a co-star for the finale, and so the bandit leader was a standard Deadly Assassin, accompanied by a Mercenary and a Psiloi on a mission to slay Altheus. Despite bringing in a more dangerous opponent, fate conspired to make this finale much less dramatic than expected. 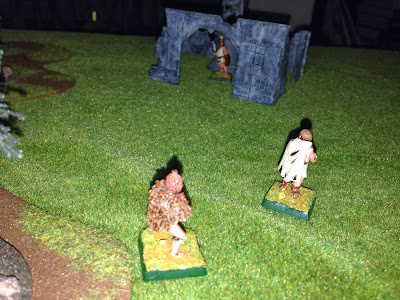 Having located their quarry, the villains seized the initiative and moved purposefully towards the ruined temple. 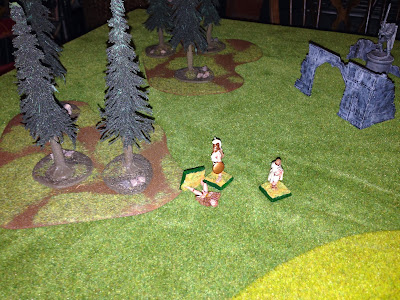 Inspired by the words of Ares, Altheus rushed out to attack. In a blur of iron and bronze, our hero dispatched a surprised Psiloi and leapt towards the bandit leader. A furious exchange of blows ensued but the bandit failed to leap aside in time and was caught on Altheus blade. The remaining Thracian fails his shaken test and runs for the hills. 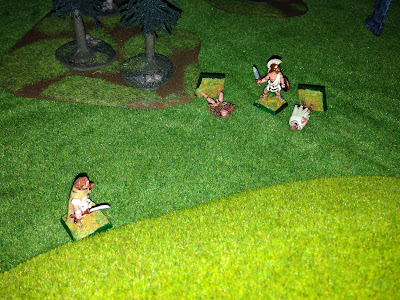 "Who are you?" splutters the dying bandit.

A blood-spattered Altheus stands, and walks back towards the temple. Standing before the statue he says quietly, "I am Altheus, favoured of Ares." 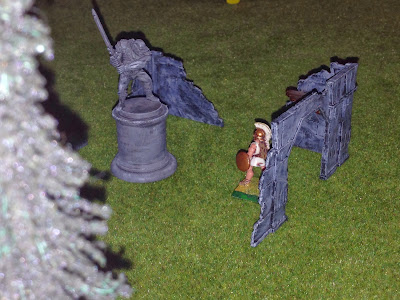 So, that's it. My first real go at narrative solo gaming, and I have to say that it was a lot of fun.

7th Voyage is a really simple and effective set of rules which helped a lot, as I didn't spend my time constantly flicking through the rule book. What's more the simplicity means that this will be an easy game to teach and so will be very good for encouraging others to play what is essentially a niche period.

My solo play house rules worked quite well. The balance is in Altheus favour, but that's not a problem as it kind of gives him plot armour. Also, during the first game, a run of poor roles showed that the bad guys do stand a chance.

I'm adding up his VPs for character and cast development, currently he's got 9 rating points to either spend or save. I've already decided that extras can be added in scenarios without cost, but co-stars need saving for.

I'm already planning a series of episodes where Ares tests Altheus, and my WFB collection is likely to be raided for stop motion monsters.