The Scenic Tour of Gotham

In the spirit of spamming my own blog, this is my fourth post in four days.

For your delictation today, loyal reader, I have a few scenic pieces for my Gotham board.  First up, a couple of Ammo Objective markers. 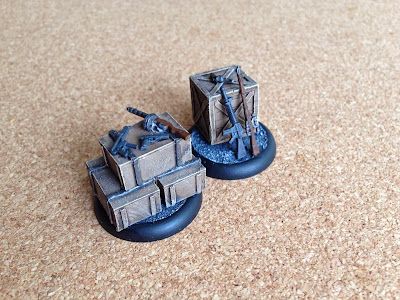 These were easy to do as I'd already painted a load of crates (more than I conceivably need) some time back so sticking them to a base and adding a few spare firearms from the bits box, and Bob's your uncle.

I now need to come up with ideas for markers for Riddles, Titan Containers and Loot, and preferably without spending money (any suggestions gratefully received). In theory I need two of each, but there are a range of special rules which raise the possibility if more and is like to do some personalised ones for the  the free agents that bring their own such as Mr Freeze and Catwoman.

I've also taken the opportunity to finish off some scenic pieces that have been sitting around half painted for months. 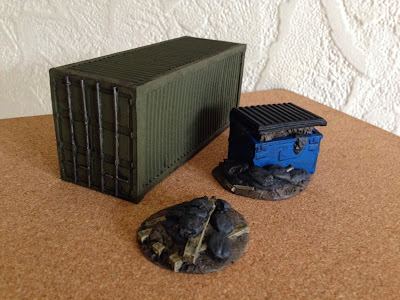 The rubbish bin and refuse piles are from Ainsty Castings, and although less than glamourous they should liven up an alley on the board, provide a route onto a low roof and possibly save somebody's life as cover.

I bought the crate from a stand at Triples this year (I can't remember the name of the company). It's not the best casting in the world but it was cheap. I've done it army green because a) that's the colour spray paint I had available, and b) Batman villains are always knocking off military supplies.

I have another to do, and I'm tempted to do something more thematic with it, such as a Wayne Enterprises logo.

We're all of to the Other Partizan show in Mewark tomorrow, so I might even be able to keep up my relentless posting with a show report tomorrow.
Posted by Kieron at 07:35