I took my Wood Elves out for a run tonight against Shane's disgustingly well painted Tomb Kings and got my ass handed to me...again! That makes it almost twelve months without a win with the Wood Elves - it's beginning to get me down. 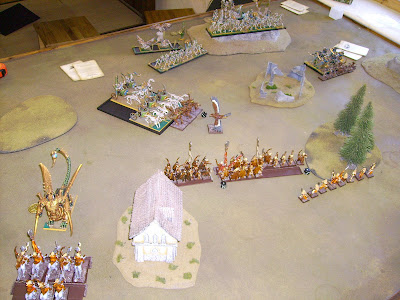 So the game lowlights...

My Treeman was taken out by a flaming catapult in the first turn. My Wild Riders failed their charge that would have turned the flank. I miscast three times despite only rolling a maximum of three dice at any spell. The Sepulchral Stalkers nuked my Wardancers with a ridiculous amount of sixes. I allowed my army to be taken apart piecemeal. I continually failed the ward save on my archers that I'd paid a whopping 75 points for.

In short, it didn't go well. There was one brief ray of light when Shane left his Heirophant (which was down to one wound at that point) out in the open. Although it needed sevens to hit it, I shot everything I had at it, and caused one wound. The Heirophant only had a 5+ ward save...he made it. He made it again a turn later when he miscast. 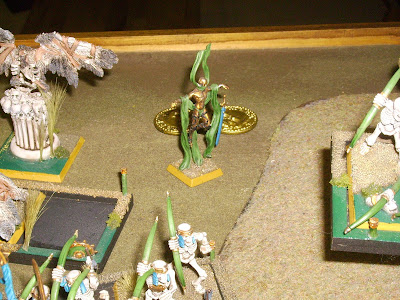 To be honest, I could moan about bad luck, but the reality is I still haven't got to grips with how to play my Wood Elves in 8th edition. I tried the Lore of Beasts tonight, but my Spellweaver was too far from the action to contribute any buffs - it's back to the Lore of Life for me. I also tried a block of Wild Riders with character support as a sort of glass hammer. This did seem to work (to destroyed a Nercrosphinx over several rounds of combat) and with a little tweaking, it will stay in the army. The eagles performed well, but I've got to get better at using my units in concert as none of them are strong enough to blast through enemy unit on their own.

A bit of a post mortem has led me to re-evaluate some of my list to try to squeeze in another unit, and bring back the Hail of Doom Arrow. Also, if I can cheaphammer up some more Treekin from somewhere, it might finally be the subs bench for Steve the Treeman as he's being taken down far too easily these days and isn't worth 285 points.

So it's back to the drawing board, but it was a good game against a good opponent who plays a lot of tournaments. I need to play somebody not very good, so once the Blood Bowl is over I'll be looking for games of WFB at the club!!!
Posted by Kieron at 15:51