Firestorm: Lorraine - A Lull In The Fighting

It's been a while. Holiday and moving house have curtailed not only my painting gaming, but also my access to the internet. However, everything is back to normal now, and regular service will be resumed.

As a brief catch up, in the last two months I've begun very slow work on an Impetus army of Sicillian Hoplites. I've also played a couple of games against Pete's Carthaginians. I lost both in exactly the same way, despite starting well, with a big unit of Gauls smashing into my General's unit, breaking it and causing the rest of the army to crumble. There'll be more on Impetus in the future.

I also managed to get a couple of games of X-Wing against Matt. As a break from the norm, we played some scenarios. I proved myself to to be completely terrible at the game, but did manage to fly a TIE Fighter off the board again by turning the wrong way on the dial (my signature move).

Finally, I caught up with Andy and Steve who I haven't seen in ages and played a couple of games of Warhammer. I was using my Vampire Counts led by a blender Vampire (Always Strikes First, 5 Attacks, Strength 7, Gains a new attack for each wound caused) leading a big bus of Black Knights. Despite my glorious general killing dozens of Andy's Beastmen, he was held up enough to allow the rest of my army to by eaten. Against Steve's wood Elves, he cut a swathe through the enemy and won the game by destroying enemy banners (it was a Blood and Glory scenario). All in all, good fun. I'm going to try to get back to Warhammer a bit more.

Finally, I watched Matt and Pete play the final game in the first turn of our Firestorm: Lorraine campaign for Flames of War. Pete's Herman Goering Panzers (supported by the SS) had an Encounter with  Matt's 101st Airborne as they attempted to capture Mairy and break the encirclement of Luxembourg. An initially dangerous thrust by Pete's Panzers was met an destroyed by Matt's reserve Sherman 76's and threw him onto the defensive until his own reserves arrived in time to push back the advancing Paratroopers. A second thrust by Panzer III's and Stug G's almost broke through the U.S. positions, but a timely assault with Gammon Bombs halted the Germans and broke their resolve.

To add insult to injury, as despite his losses, Matt didn't lose a platoon, so it was a 6-1 win, which meant that Matt's Firstorm troops were safe, whilst Pete's SS were destroyed. However, due to this being the end of the turn, the SS would be back for the next battle as they weren't captured.

Here's how the map looked after the battle: 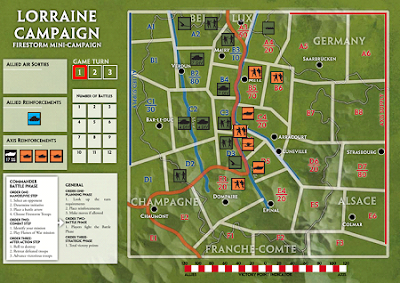 The current scores are as follows:


Despite US gains, the Germans are still firmly in control of the region and had only actually lost one unit of Firestorm troops. All was not lost.

With the end of of the turn, both Generals were allowed to move their Firestorm troops to prepare for the next round. Pete also received support in the form of Panzers to the south and the reformed SS. Matt would be able to bring his own massed tanks into the fray, along with the French 2eme Division Blindee.


In an aggressive move, Matt has pushed his tanks forward to threaten all along the Moselle and is trying to exploit the opening to the north. Pete has largely stayed in place, only pushing his Panzers forward and moving the SS to stop the American breakthrough.

There will be 8 battles in this turn and the Allies still add 1 to their initiative rolls and win ties. I'll be playing the first game of the turn this week, turning out my US Tanks against Wayne's Hungarians.
Posted by Kieron at 23:57