Batvember 3: Who are these clowns?

I was perusing eBay the other day and came across something that you don't see very often; second hand Batman miniatures which aren't 'pro-painted'. The lot included Talia Al Ghul, Harley Quinn and two of the Joker Crew.

Now here's the rub. The models were assembled, undercoated and without bases and cards, none of which are obstacles to sale. However, the Joker henchmen were from the box with Clown Prince which meant that a) anybody who had bought or was going to buy the Joker (in other words everybody) wouldn't really want them, and b) they were of particular use to me as I already have a Joker that I like and would struggle to justify buying another one to get the henchmen.

As you've probably guessed, I leapt at the lot and won it for roughly two thirds of the cost (including postage) if two characters and a pair if henchmen.

So, to cut a long story short, here's two if the four as this week's offering for Batvember. 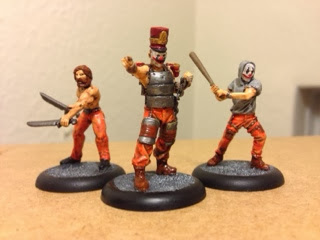 Yes, there are three of them. We'll come to 'Chuck' in a bit. 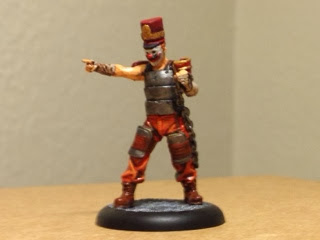 First up, the Ringmaster. This is a chunky model and very sturdy compared to most of the Knight Model sculpts I've seen. I'm very happy with the colour I've got for the hat and epaulettes, but the mask probably needs a bit of highlighting work. 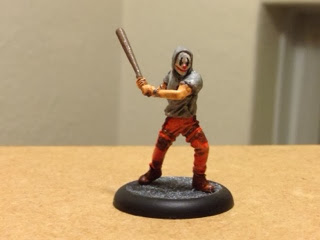 Secondly 'Auguste' (or Contra Auguste, I can't remember). This guys positively simplistic compared to the Ringmaster. I chickened out of putting the Arkham logo on his top, but I am very happy with his mask. 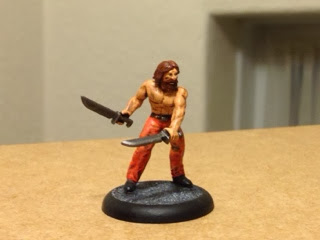 Finally, Chuck. This model has been bodged together with parts from several models: legs from a Clix henchman; upper body from a Clix Ra's Al Ghul; hands from the Bolt Action Russian sprue; blades from 40k; and the head of an Ancient German. He'll be used as the High Security prisoner from the Blackgate box, and I call him Chuck because he looks a bit like Chuck Norris (to my eyes anyway). Frankly, if Chuck Norris was in prison, he would be HIGH security...

So that's it for this week. It looks like next Sunday will be ladies night with one or both of Harley and Talia making an appearance.