Batvember 4: She's Out Of My League

As promised, the next of my little windfall of purchases: Talia Al Ghul. I was pleased to be able to pick her up cheap as I was never intending to pay full price for her as 'leather-clad chick with sword' is actually really easy to find alternatives for and the scale issues are not so important with female characters as women tend to be shorter than men. 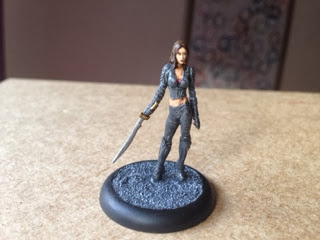 Once again, my photos seem to let down what is, for me, a pretty satisfactory paint job.

This is actually a better model than the image on the Knight Models website let on. However, the is a lot of very fine detail which meant that I really had to work hard on getting the face right first time because several layers of paint would begin to obscure detail. It's not as bad as Mr Freeze's face, but it was still a bit nerve-wracking.

As well as being able to join Batman, Talia represents the official arrival of a third faction in my games, the League of Shadows (or Assassins, depending on your preferred source material). She can lead the three Blackgate Prisoners against Joker, Harley and the two clowns or my massive Police Force. She adds flexibility and variation to my games, which is good. 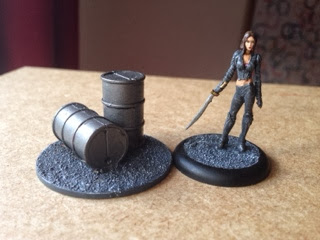 Finally, I've done a small piece of terrain (I've been busy alright). A couple of oil drums cut from the display stand that my Batmobile came on. Nothing fancy, although I'll probably add some labels when I get round to getting the printer out.

Next week is even busier for me so I'm not expecting to produce that much, however, the plan is to get my official Harley Quinn done and to add a couple mor small pieces of scenery. We'll have to see ho that goes.