There's a little bit of deja vu going on today as I've painted the Avengers...again. 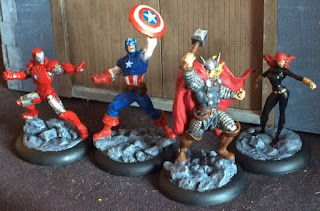 This time it's in 32mm for the new Knight Models release, the Marvel Universe Miniatures Game (to which I'm determined to ascribe the acronym 'MUG' ). Built on a similar but more streamlined engine to BMG, it deals with a much higher level of power and allows models to throw and destroy the scenery in the process of a good old-fashioned superhero smackdown. 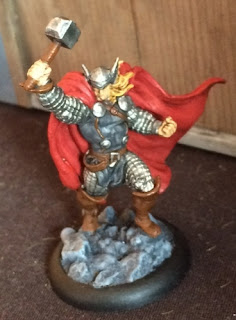 First up, the Mighty Thor, the God of Thunder. As well as being a chunky model, this one is a pleasure to paint as it's well defined and detailed, without being too fiddly. The base, like the others, was built up with small stones to add to the large amount of tactical rock that's already part of the model. 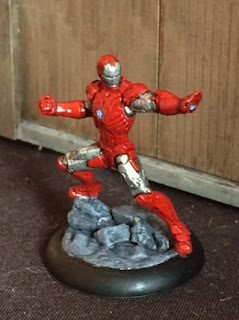 Next, the Invincible Iron Man. This one caused me a bit of hassle. Like the Crossover Miniatures version I painted a while back, I couldn't get the red and gold to work properly, as the red was too flat and the gold was too patchy. What's more, I'd over done the undercoat and lost some of the fine details on the face.

I solved the problems with a bit of research and ingenuity. A little Google-fu turned up this:

It's one of the alternate suits that features in 'Iron Man 3' called the Silver Centurion. This gave me the excuse I needed to replaced the gold with silver (which always works better for me) and darken the red. I managed to get the shine on the red parts by adding a coat of one of the the Citadel Technical Paints, the awkwardly named 'Blood For The Blood God', which is meant for making blood look wet. However, it served to give a suitably metallic shine. 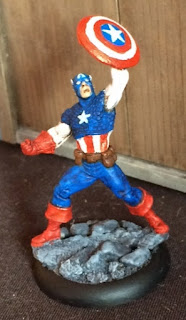 Captain America, the First Avenger. I'm really happy with this model, although it is probably the one that struggle most in close up (although it is a bit bleached by the lighting - and the eyes have more detail than it seems). The stripes on the uniform and the circles on the shield were tricky, and they're not perfect. However, they work on the tabletop and didn't drive me to insanity in the process. Cap was the one of the models that made me most nervous, and I'm just pleased to have made a half-decent job of him. 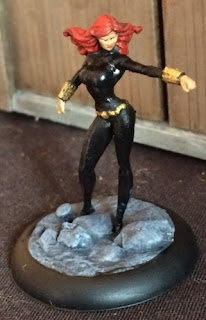 Finally, Black Widow. The controversial member of the team.

Why controversial, you ask? Well, it's like this. Some time ago, KM began releasing Marvel miniatures without an associated game. Cap, Iron Man and Thor were all part of the range, along with Black Widow. However, not this Black Widow, a different one. This one:

Now it's not the best model in their range, but by being different it means that people who'd already bought into the range, needed to buy all four again to get a Black Widow that's usable in official events, which seems a bit mean...at best.

The other issue is that, despite being in a more dynamic pose, the new model isn't great either. Fan service dimensions aside (that's more a genre thing), the legs are sort of spindly, the uniform lacks detail and the face really lacks definition. As a comparison, have a look at my definitely-not-Black-Widow-she's-called-Natalia-not-Natasha, from Reaper Miniatures. 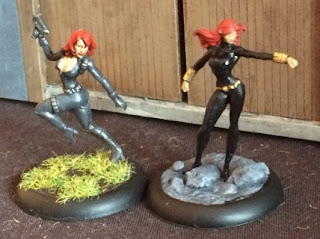 Yes...still full-on fan service, but there's just so much more detail on a model that's technically half the price.

Despite being disappointed, I'm still happy with the what I've done with the model and the lack of detail encouraged me to simply use a black ink to give her costume a PVC shine. I've done what I can with the face (although she looks a bit like Tracey Ullman) and she'll do. I might be sneaking my Reaper version in for friendly games though.

So, the Avengers are assembled, again, and I've got my eyes on Wolverine and Black Panther to add to the crew and the Hulk I used as Solomon Grundy, may get a repaint. I also need to find somebody to play against, at which point, I'll do a review of the game.
Posted by Kieron at 11:07