The Perils of Trying Something New

Sorry for the hiatus, life's been a bit busy.

The most recent games I've played were over a week ago and Matt, Pete and I gathered for a round robin of 750 point games of Kings of War.

Having just received my copy of the Uncharted Empires expansion for Kings of War, I decided to give my Bretonnians a spin as the Order of the Brotherhood, rather than the Kingdoms of Men that I'd used previously. The list is a better reflection of the Bretonnians in WFB with more variations of Knights, Pegasus Knights and lots of Peasants that gain a nerve bonus from nearby Knights. The goal was to find out if my current collection of models worked better as Brotherhood, rather than the more generic Kingdoms of Men. I decided using any of the Order of the Forsaken (Pegasus Knights) as I'd used flyers in all my recent games and knew how they'd work. I was more interested in finding out about the other units.

Pete had brought an aggressive version of his trusty Dwarves and Matt was giving his Empire troops a run out using the League of Rhordia list instead of Kingdoms of Men for similar reasons to me. 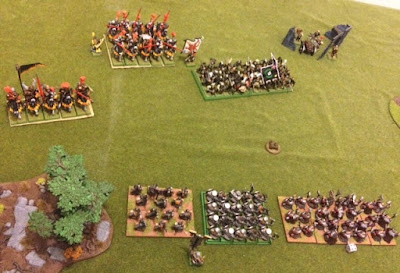 Matt advanced both units of Knights and they proved effective in charging and breaking the Dwarf regiments. The Ironclad horde weathered a storm of shooting and outmatched the City Militia (which Matt discovered are not the equals of the Foot Guard he has run previously). The MVP was Pete's Berserker Lord which flanked the woods on the right and destroyed the Volley Gun before loughing into the flanks and rear of Matt's units, winning Pete the game. 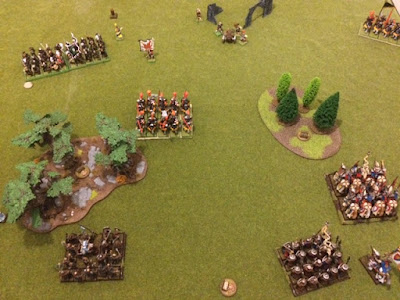 Matt came forward with his Knights, and I matched them with my infantry, although they were worn out and broken when the City Militia advanced. My Knights charged through the woods to first hit the troop of Knights opposite before turning on the Volley Gun. My Bowmen spent the game advancing up the left flank and throwing damage into the Militia. The game ended as a draw, but I later discovered that I shouldn't have been able to move and shoot my Bowmen, which might actually have meant Matt would have won. 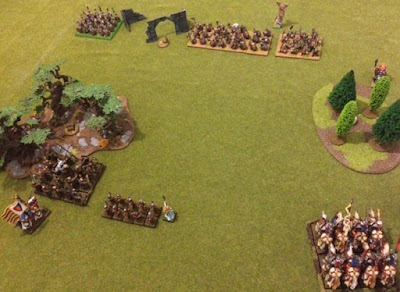 At the start of this game I looked across the table and fully understood the failings of my army. My regiments of Peasants were no match for Dwarves, and even though my Knights pack a punch, failure to break their target would see them flanked and ground down. What's more, I had no real answer for the Berserker Lord. I did exactly the wrong thing and went all defensive, trying and failing to mitigate the threat of the Berserker, allowing the Dwarves to dictate where fights would happen and relying on frankly inadequate shooting. One by one my units were caught and destroyed in a calamitous defeat. My Knights did break the Shieldbreakers, but as expected were flanked and routed too.

So in the spirit of being more aggressive, let me introduce my crew for my next Batman tournament at Titan Games in Lichfield on Saturday: 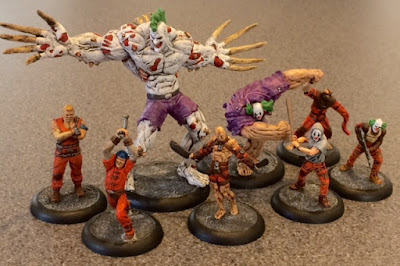 Titan Joker, Victor Zsasz and the Titan Clown makes this a full on attacking crew. I'll probably get gunned down in short order, but hey...it's different!