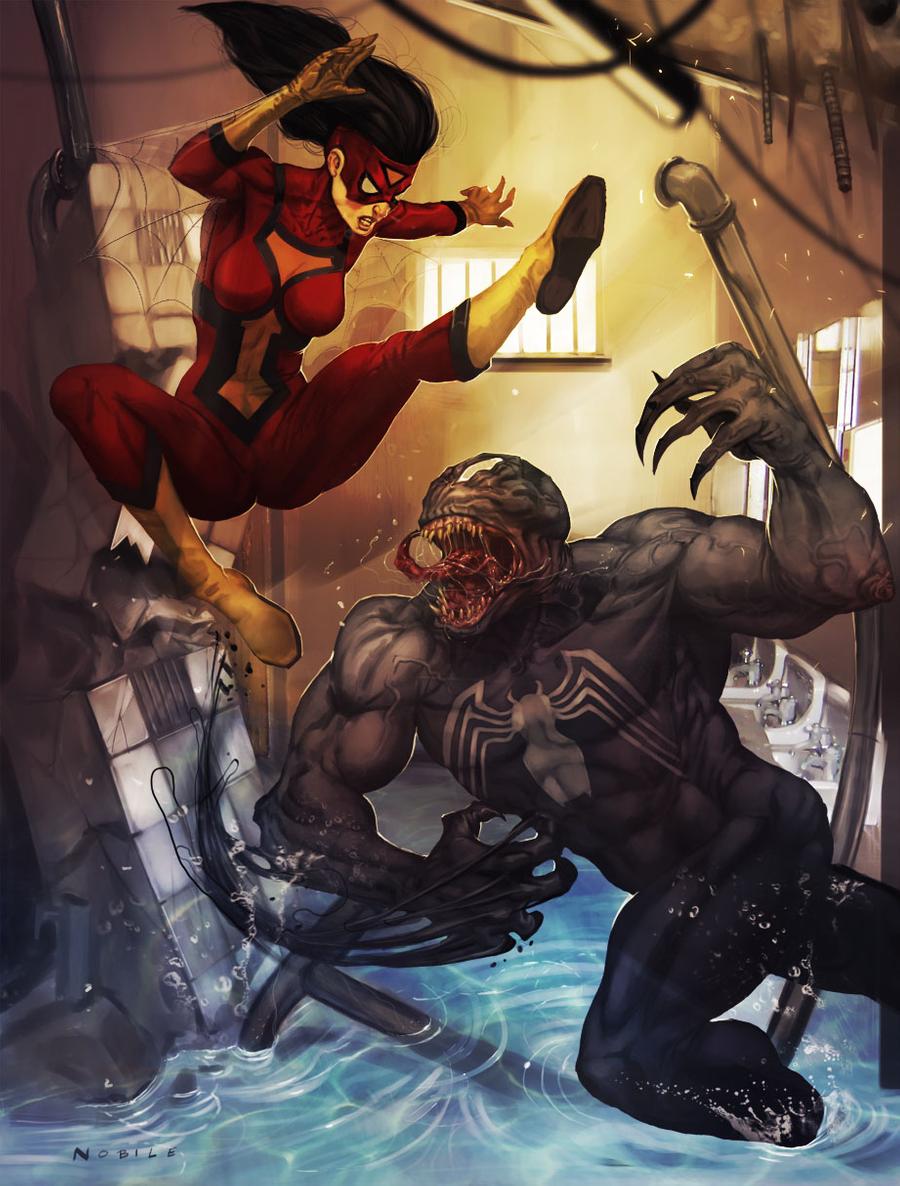 This is the second part of my campaign based on the initial scenario from the Marvel Heroic Roleplaying Game, which in turn was based on the Breakout storyline from New Avengers.

A massive power surge has his the Raft maximum security prison, releasing acres of dangerous supervillains. In the last issue we saw Captain America, Spider-Man, Iron Man and S.H.I.E.L.D. agents battling to contain the escape on the surface level of the Raft.

Meanwhile, down below, lawyers Matt Murdock (Daredevil) and Foggy Nelson are paying a visitor to a mystery client who is voluntarily confined in the Raft. Accompanying them are their hired bodyguard, Luke Cage, and their S.H.I.E.L.D. liaison, Jessica Drew, aka Spider-Woman.

When the power surge hits they find themselves plunged into darkness, surrounded by villains and a long way from safety.

Due to a lack of suitable 3D terrain, my set up for this game is based on the underground base map from the Terminator: Genysis game with a few pieces of scatter terrain to liven it up.

Although I’d prefer a 3D set up, this is actually great for what I wanted, which is narrow passageways within a confined area. 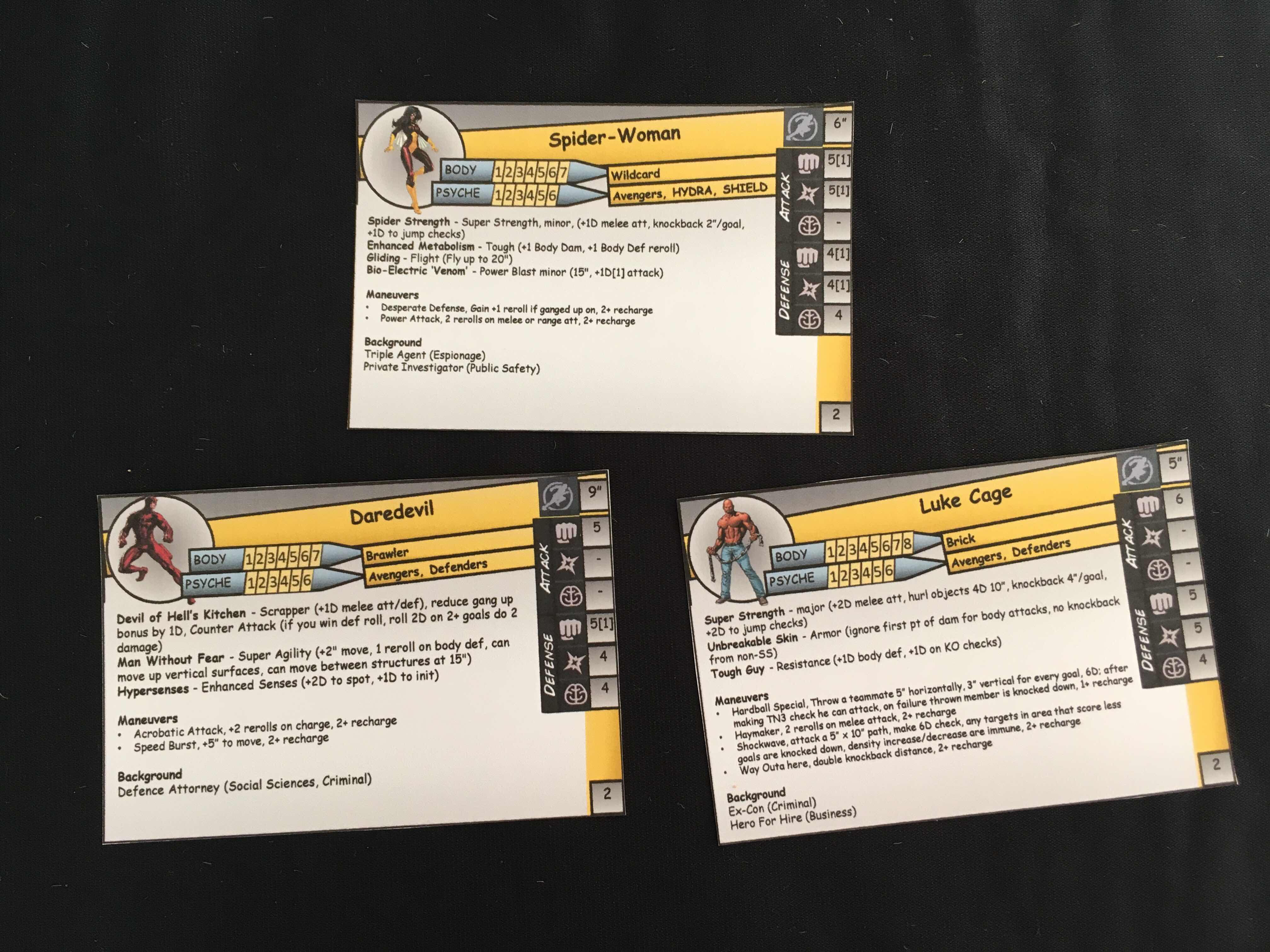 With big names up top, the heroes for this scenario are a little more street level: 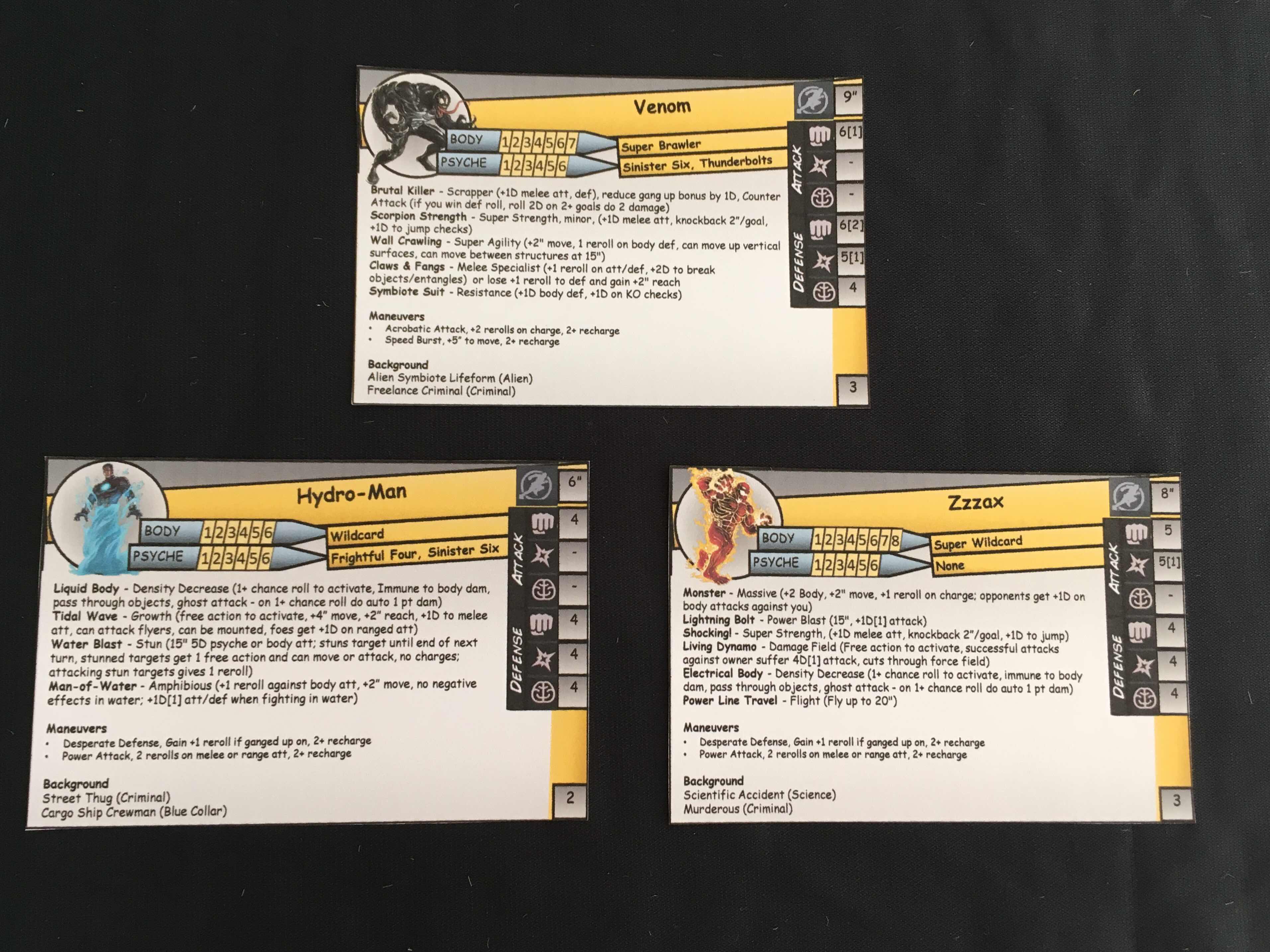 The villains are a bit more of an interim set up. The original scenario requires just Carnage, however, I wasn’t able to get a decent sculpt of the character at a price I was happy to pay, also I wanted to add a bit more variation to the game:
Scenario Rules: CARNAGE IN THE DARK

Description: Plunged into darkness, a group of heroes trapped in the Raft must try to meet up with an innocent prisoner and restore power to the security systems whilst protecting a civilian lawyer.

Setup: Define a 3x2 area of narrow passageways and cells (all doors are unlocked). In one corner is the cell of the innocent prisoner, in the opposite corner is the generator room. The heroes and a civilian lawyer deploy in the centre of the board. One villain deploys in the generator room, whilst the other villains deploy in the centre of each of the shorter bird edges.

Special Rules: The villain that deploys in the generator room is drawing power from it and may not leave or act until a hero enters the room. The generator can be fixed if a hero takes a special action, TN3 (Science background adds +1 goal to this test), whilst next to it. Once reactivated it can be broken like any other object by the villains, but not before.

The innocent prisoner may not act until he is convinced to help by one of the heroes with a special action, TN3 (Social Sciences background adds +1 goal to this test). Once convinced to act, replace the prisoner with a Powerhouse hero.

The civilian lawyer has a profile of: Move 6”, Body 2, Psyche 2, 2D on all tests, Social Sciences background. Villains cannot attack the civilian lawyer unless he is the closest target at the start of their activation.

Characters cannot fly, levitate or leap in this scenario.

End Game: The Raft is filing up with dangerous villains looking for an escape. After five rounds the heroes will decide that they need to head to the surface to help stop them.

Post-Battle Specials: Villains that are not KO at the end of this game are added to the villain roster for the next scenario. If the innocent prisoner is convinced to help, treat one villain that was not KO as if it was.

The innocent prisoner and civilian lawyer do not take part in the next game. 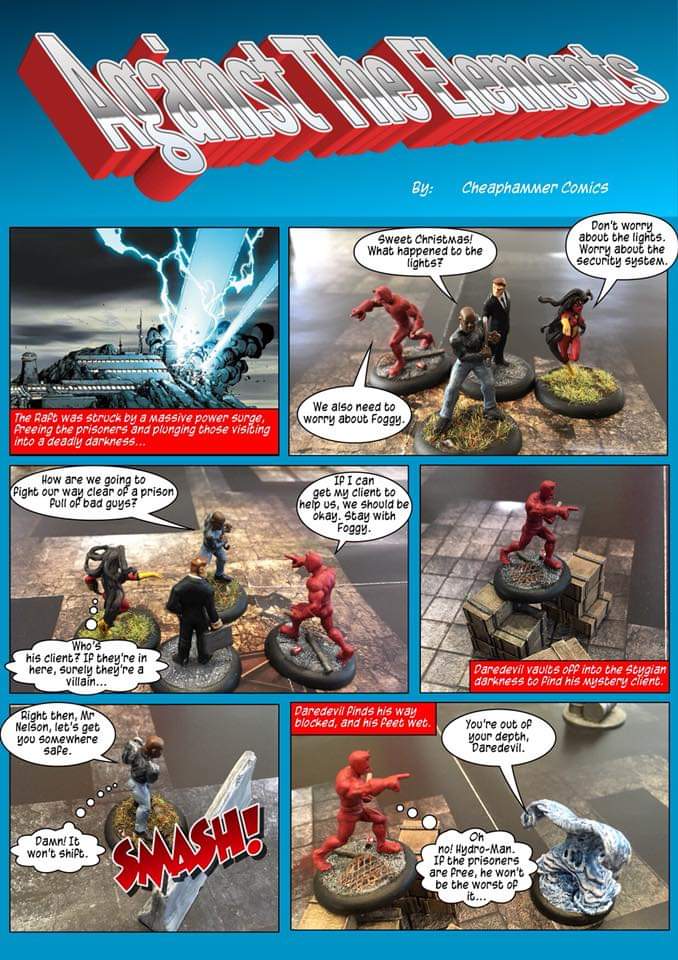 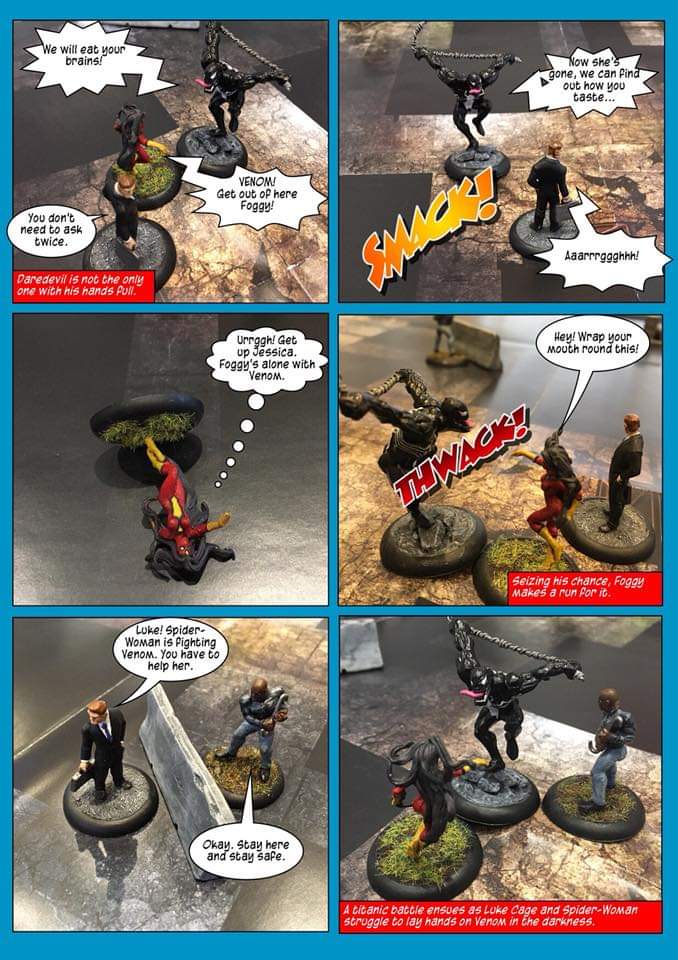 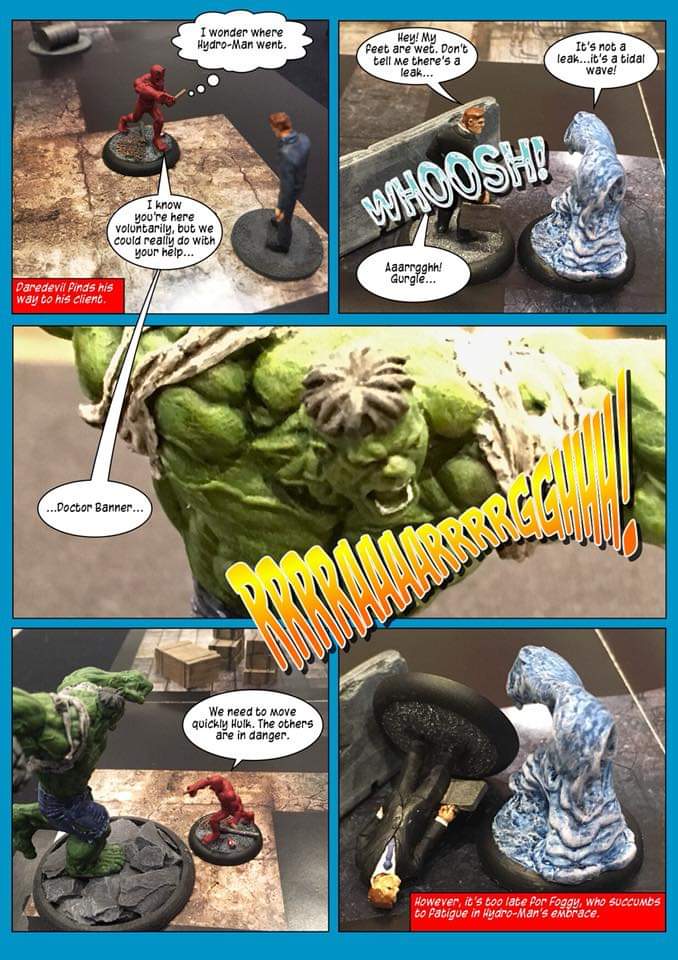 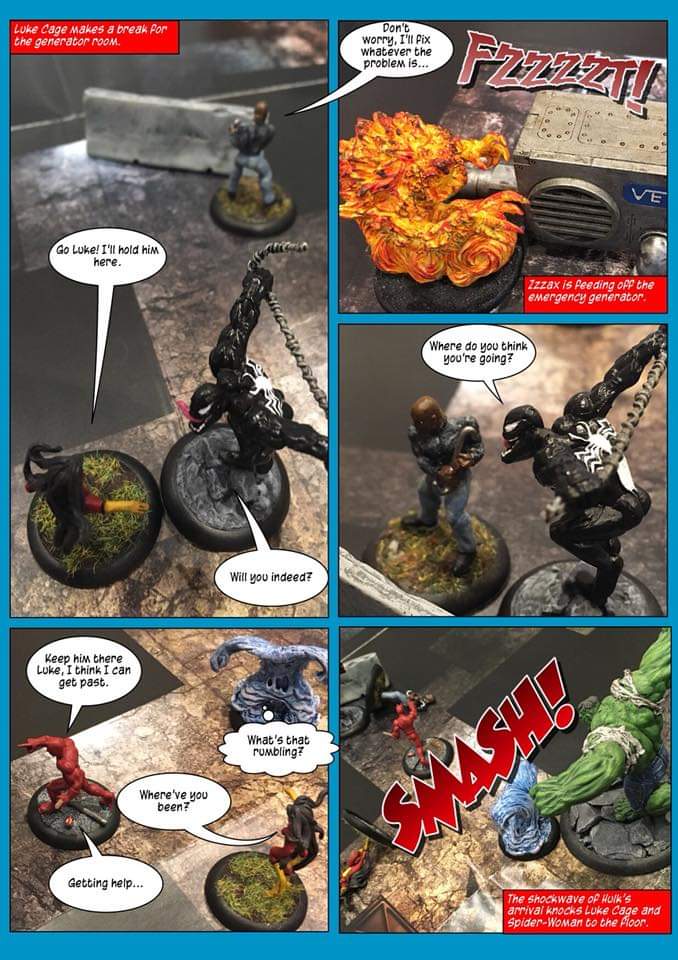 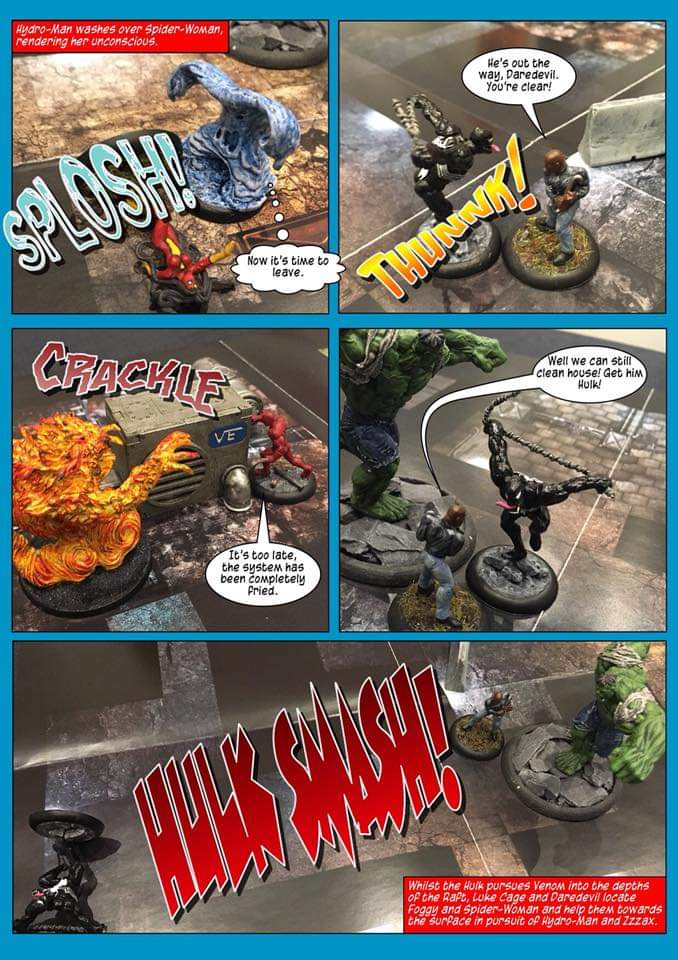 Despite getting the Hulk involved, with both the generator still out of action and Foggy KO, the victory went to the villains, despite Daredevil running the length of the board. T add injury to insult, Spider-Woman will be at -3” move and -1 dice in attacks for the next scenario; fortunately her ability to fly should keep her safe and useful.

This one was a tough ask for the heroes. Venom proved extremely hard to hurt in the darkness, Hydro-Man’s density decrease made him an excellent blocker. However, they lost mainly because I pulled Luke Cage away from  protecting Foggy to join the futile assault on Venom.

In the original comic, it’s not the Hulk in the cell, it’s the Sentry. However, a free download for Marvel Heroic Roleplaying game offered the Hulk as alternative inmate, and as I had the  Knight Models Hulk, I thought I’d use it.

With the heroes winning the first game so handily, losing this one sets up the final battle of act one nicely. All six of the New Avengers will go up against a massed horde of escaping inmates.
Posted by Kieron at 10:37