I’m off to a 7TV tournament in a couple of weeks, although I use the term ‘tournament’ loosely, as 7TV seems designed to obstruct overtly competitive types with random silliness.
It’s being held at Board in Brum in Birmingham, which is not somewhere I’ve been before, and it’s their second 7TV event. They have a really nice feature of asking participants to take along a terrain board (if they want to) which matches their cast.
I’m taking my Foot Clan along, and so I shall also be taking along my urban terrain and may. Although my simplistic terrain won’t really match up to some of the outstanding boards I saw photos of at the last event, it’s a good excuse to finish off some jobs that I’ve been putting off for a long time, such as this... 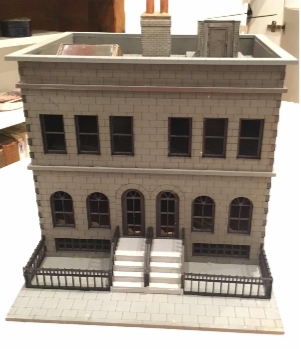 Yes, I know you’ve seen it before and it was assembled and painted years ago at the start of my journey into the Batman Miniatures Game, but if you look closely, you’ll nitcive something has changed...
Yep, I’ve finally painted the steps and railings. I’ve kept things simple to fit with the flat, comic book feel that I did the other buildings in. I decided to go with black railings as it evokes cast iron which is more transferable through the different eras I use this building for.

I’ve also painted the holes on the chimney pots, which was something else I’d inexplicably not done, and reglued the back wall on the top floor, as it was beginning to come away.
Along with the building, I’ve done the first of a couple of jobs to make my board a little more TMNT specific.

This is a BMG billboard that originally had a Vicki Vale radio show design etched into the mdf. However, try as I might I could never get the poster to look right as the colours alway faded into the mdf.
Cue today and a much simpler approach. Paint it black and stick a printed poster over it!
TCRI (or Techno-Cosmic Research Institute) are a nefarious company that feature in several iterations of the Turtles. I know them best from the 2012 animated series, where TCRI are the front company for the Krang invasion of Earth.
Sadly, I made a bit of a mistake when sticking the printout to the billboard and it’s a little off centre. I couldn’t change it as I discovered today that if you use pva to bond paper to mdf, it bonds instantly. It looks fine but it will annoy me.
There are a couple more small jobs I want to do to the table to ‘Turtle it up’ a bit before the event at the end of January.
I forgot to mention my painting tally last week. This is part of my resolution to paint more than I acquire and with the three tanks and these two terrain pieces (I’m counting the stairs railings and chimney as one ‘model’) my tally currently stands at:
Acquired: 0
Painted: 5
That’s a good started, but I’m going to have to pick up the pace because something happened last week that is going to upset the apple cart very early in proceedings. I’ll give more details in a few weeks, but I will say that it’s not my fault.9
Posted by Kieron at 12:04