Happy New Year!
I’ve spent the last week or so cobbling together a range of plastic vehicle kits I got for Christmas. I don’t particularly enjoy painting vehicles and I tend to go for simplicity rather than anything clever, so there’s not much in this post to shout about.
Anyway, here’s my Soviet armoured fist. 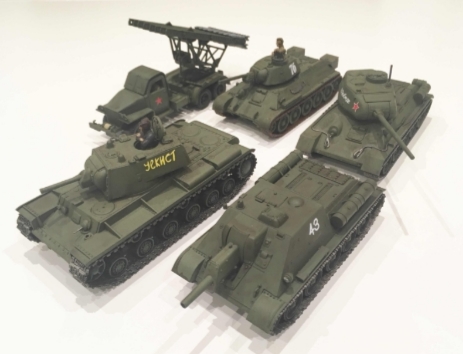 First up is the KV-1, a slow and heavy tank from early in the war that has armour beyond anything the Germans had to throw against it. It should give Pete a few headaches in our Ostfront games until we get to the invention of the big cats.
The kit is from Warlord/Italieri and has some needlessly fiddly bits such as tracks that come in four separate pieces, and panels which seem like they would have been better simply moulded as part of the hull.
However, it does have one rather outstanding feature...
...it comes with a second turret allowing it to be fielded as a KV-2 which packs a massive heavy howitzer capable of destroying buildings in games.
The turret was again a bit awkward as I had to hold about six pieces together at the same time, and on the other side of the turret there is a bit of a bigger gap between panels that I’d have liked because of this.
However, don’t let this put you off as that’s more about me being a bit ham-fisted. This is still a great kit, especially because it not only gives you two tanks for the price of one, but also comes with a sprue if Russian infantry as well.  With 20% off the RRP at Outpost Games, it’s a full blown Cheaphammer bargain.
What’s more, it gives me much more powerful artillery to play with than the single medium mortar team I’ve been coping with so far.
On the subject of artillery...
...I’ve also built an SU-122 self-propelled gun.
This kit is from Rubicon and quite frankly was much easier to build than the KV-1 kit. It also had options to be built as as an SU-85 tank destroyer, however it wasn’t really possible to make it interchangeable without faffing about with magnets.
I went for the SU-122 as the KV-2 isn’t available in late war lists, and therefore the SU-122 will take on the same role by the one I’m destroying Berlin. It will have to be a bit more cautious than the KV-2 due to being built on the chassis of the T-34 medium tank.
This Katyusha mobile rocket launcher should help when it comes to flattening Berlin.
Another Rubicon kit, and similarly easy to build. There is one area in which it falls short if the Warlord kit, the driver (there is one in there) lacks the detail and definition of the crew of the KV-1. This would give me pause before I bought any of the Rubicon infantry or artillery kits.
Katyushas played a large large and amusing role in our big Christmas game, and so I look forward to getting this into a game where there’s infantry clustered that need obliterating.
The three kits came with a plethora of waerslide decals, allowing me to finally add a little bit of character to my other tanks.
I amused myself by adoning the resin tank I originally bought as part of an eBay lot when starting Bolt Action with a large 76...as it’s a T-34/76.
I also added a bit of colour to my T-34/85 (no, there wasn’t an 85 on the decal sheets).
This tank is other reason I didn’t build an SU-85, as they are both packing the same heavy anti-tank gun. Technically, the tank destroyer was available earlier in the war, but I felt that the SU-122 offered greater versatility.
So that’s what I’ve been doing. Not especially clever or show-stopping, but table worthy and ready now to allow me a proper choice vehicles before games. It also means I can fight a Tank War game in 28mm.
Posted by Kieron at 13:31