As I mentioned in my last post, this week I played Matt, whose preferred army in WFB has always been the Empire (a curiously rare army choice round these parts), and so for the first time I was looking at crossing lances with an army that almost certainly wouldn't be in a rush to close with me. I'd have to make the running, so to speak. Indeed, I realised how fast that running would have to be when Matt unpacked his 1600 point army:

It's worth mentioning that Matt hadn't previously played a game of 8th edition, but he'd clearly got the gist of what works these days. Ouch!

The only changes to my army were that I'd dropped the Crown of Command and Channelling Staff (or 'Expensive Stick' for all the good it was) on the Damsel in exchange for the Mane of the Purebreed and a Dispel Scroll. It was apparent that I would have to get to grips with Matt as soon as possible otherwise his gun line (let's call a spade a spade) would tear me apart.

The scenario we rolled was Meeting Engagement (third time in three games) and Matt deployed first. He deployed around a hill with the Knights on the left and the Swordsmen and Detachments on the right. Two cannons were placed on the hill with the third on the far right of his line. The Volley Gun was placed below the hill on the right with some Hand Gunners and the Light Wizard. The Metal Wizard had clearly not set his alarm and would be arriving from reserve.

I would be attacking the Empire's line through several woods (Matt was delighted to hear that they don't stop cannon balls. The Knights of the Realm and Knights Errant were deployed opposite the Swordsmen as I had an idea that I could slam both units into their horde formation. The Peasant Bowmen set up between two woods (to protect them from the Empire Knights) where they could target most of the line and the Grail Reliquae and Pegasus Knights were on my far right looking to flank Matt's line. The Men at Arms would be arriving from reserve.

Being new to 8th edition, Matt was less than delighted to learn all about the Vanguard move as my Pegasus Knights flapped neatly into his flank, threatening a first turn charge on the cannons on the hill (I knew I'd be going second as I would be praying).

Turn 1
In true gun line style, the movement phase was over quickly as the cannons on the hill swivelled to face the Pegasus Knights and the Metal Wizard came scurrying on behind them. Matt put 6 dice into trying to cast Searing Doom on the Pegasus Knights, but he failed to get irresistible force and I was relieved to be able to use my newly installed Dispel Scroll. Matt's luck didn't get any better in the shooting phase as all three cannons fell short of the mark and the volley gun was out of range of the knights. At least one of the Hand Gunner units was able to kill three Peasant Bowmen. 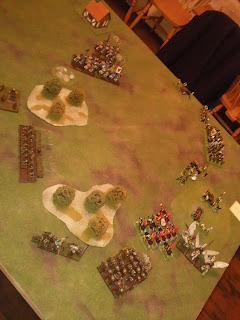 Having failed to bring down the Pegasus Knights, the cannon crew braced for impact as they were charged. The Men at Arms came on behind the Pegasus Knights and the Grail Reliquae moved up in support of them. From my left came the sound of drumming hooves as both of my Knight units galloped across open ground, aware that they'd had a lucky escape, but that their luck might not hold. An uneventful magic phase was followed by an excess of action. Although the trebuchet misfired, the Peasant Bowmen found their range and killed five Hand Gunners with a single volley. This was followed by the predictable slaughter of the cannon crew by the Pegasus Knights (who then overran into the next crew) and the Empire Knights panicking and running off into the woods, where four of them fell off their horses and died. All in all, a pretty good turn one for me.

Turn 2
The Empire Knights rallied...and the movement phase was done. The Light Wizard cast Speed of Light in an attempt to save the cannon crew (or at least hold the Pegasus Knights for a turn) and miscast, frying three nearby Hand Gunners. With two cannons out of action and eight Hand Gunners dead, I'd done well in reducing the incoming fire, however it wasn't enough. I was briefly hopeful when the final cannon only brought down a single knight (the Damsel head-butted the cannonball to safety with the aid of the blessing), however the Hellblaster was now in range. Twenty-something shots, resulted in 16 hits and eleven wounds. Armour and the blessing had a little impact as five Knights were slaughtered. The Hand Gunners polished off the last two and both the BSB and Damsel were left wondering where their unit had gone. Ouch! On the up side, despite magical interference, the Pegasus Knights slaughtered another cannon crew and reformed to get a bead on the Light Wizard. 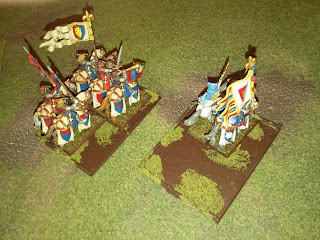 With the Knights of the Realm gone, charging the Swordsman Unit to the front was out of the question. So the Knights Errant, BSB and Damsel bravely decided to all gang up and charge the remaining cannon crew with the intention of going off the board for protection should the Hellblaster survive. The Light Wizard fled the Pegasus Knights, who redirected into the Hellblaster Crew. The Men at Arms tried to get themselves between the Empire Knights and the rampant Pegasus Knights. Magic was once again weak for me, but shooting saw the Peasant Bowmen finish off the last two Hand Gunners of the left detachment and the trebuchet found its marks and slaughtered fifteen Swordsmen! The last of Matt's war machine crews were butchered in close combat and the Knights ran off the table whilst the Pegasus Knights stayed still (I really should have done something with them). 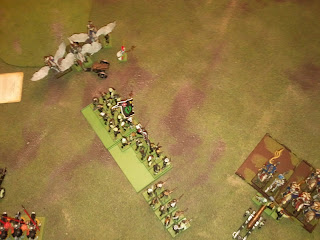 Turn 3
The first two turns had seen the Empire take heavy losses, but they were about to claw their way back into the game. The Empire Knights charged the Pegasus Knights in the flank whilst the Swordsmen reformed into a tighter formation and advanced with the remaining Hand Gunners. The Light Wizard rallied and cast Speed of Light on to the Empire Knights. With no shooting, combat saw the heroic Pegasus Knights beaten and run down.

The Empire were now bunched together, I saw a chance to trap them between two forces. The Men at Arms and Grail Reliquae moved up closer whilst the Knights Errant and Heroes returned to threaten the rear. With my own troops so close, I didn't risk a trebuchet shot and for the first time in the game, the Peasant Bowmen missed as they tried to snipe a Wizard.

Turn 4
The Empire Knights swift reformed and with the Speed of Light still in effect, were able to move out of my Knights' charge arc to present a full battle line. The Metal Wizard jogged to the top of the hill and failed to cast Searing Doom at the Knights Errant and the Light Wizard miscast again, this time killing a few Swordsmen. The Hand Gunners killed a couple of Bowmen. 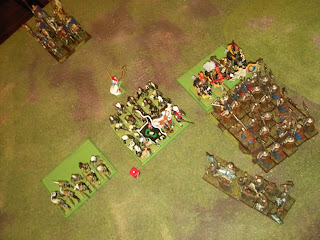 Seeing that I had to do something before Matt's combined army pounced on one part of my spread out forces, I charged the Men at Arms into the Knights. I also moved the Grail Reliquae up to try to prevent a flank charge by the Swordsmen and positioned the Knights for a charge next turn. Hexes and augments a plenty were cast to try to tip the fight in my favour and the Bowmen traded shots with the Hand Gunners. In combat, the Men at Arms won but were unable to break the Knights (thanks to the proximity of their BSB).

Turn 5
Once again I'd misjudged my blocking move as the Swordsmen were able to flank the Men at Arms. The Light Wizard augmented the Swordsmen and the Hand Gunners failed to shoot any Bowmen. This time the Men at Arms were soundly beaten, and despite being steadfast, their pitiful Leadership of 5 saw them running for the hills to be cut down by pursuing Knights. The Swordsmen reformed to face the Knights Errant.

My Knights charged the front of the Swordsmen and the Grail Reliquae charged the rear. Again Wyssan's Wildform and Harmonic Convergence were cast on the Knights. The Bowmen brought the Hand Gunners down to three and the trebuchet took a pot shot at the Empire Knights and missed. Despite the Speed of Light and the Griffon Banner, the Swordsmen were beaten. However, they were still steadfast with the BSB's re-roll to fall back on. Fortunately Matt showed that he hasn't lost his knack for failing Leadership tests (our many Empire vs. Vampires games had predictable results due to Matt's innate talent of rolling high at the wrong moment) and the Swordsmen fled and were run down by the Knights Errant. 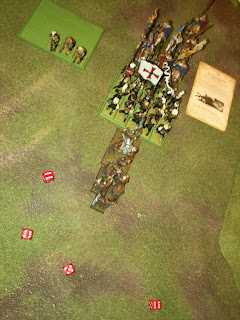 Turn 6
The last turn saw very little happen, save for a lucky trebuchet shot wiping out the Warrior Priest and the remaining Empire Knights. I'd won, but I ended a lot closer than it looked like it would after the first two turns.

This was a game where I have to admit I got lucky. It wasn't one sided luck throughout the game, but Matt's first turn was so ineffective that it was like me having the first turn. For three cannon shots to fall short and his magic to also be wasted was nothing short of unlucky. Had he taken out the Pegasus Knights, my army would have been pummelled by cannonballs throughout the game. However, the mauling from the Hellblaster (which Matt identified would have been better placed on his flank) was horrific and has taught me that I've got to consider cover when placing terrain in the future. I suspect Dwarves, Empire and possibly the new Ogres will always be tough nuts to crack for Bretonnians due to their artillery.

I need to be careful about splitting my army up as my units are very vulnerable on their own. The peasants need either or both of the General and the BSB nearby to withstand combats and the Knights have vulnerable flanks and can be easily outlasted by infantry. Again, a turn of luck broke the Swordsmen; had they held, the next round of combat could have easily gone the other way and tipped the game for Matt.

Finally, although Searing Doom was never cast, I was always conscious that it was lethal to my Knights. I need to consider how I'm going to make sure that Metal Wizards don't survive very long.

Overall a good game which, hopefully, has brought Matt back into the WFB fold after a long absence and which has forced me to think about fighting in a more aggressive style. Next up, a campaign game against Craig's Tomb Kings...I thought I played too defensively last time we met, so maybe it's time for a little bit of 'Tally Ho!'
Posted by Kieron at 06:22