Well, it's been a chore, but I've done it (yes, I know the picture is terrible again). 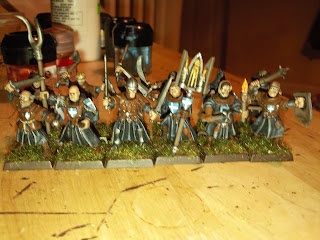 A combination of starting a new job, the start of a new school year and simple Bretonnia fatigue have made getting these 12 fellas done a right pain in the backside. However, their arrival will see the end of the ever so faintly cheesy Reliquae Conga Line tactic I've been using, as they become a unit of 24 (25 with a Paladin on foot). They should strengthen the line a little and might even kill someing every so often.

I'm not overly proud of the painting, which is why I'm not too worried about the picture. They were quick and dirty and nobody will ever look at them too closely. 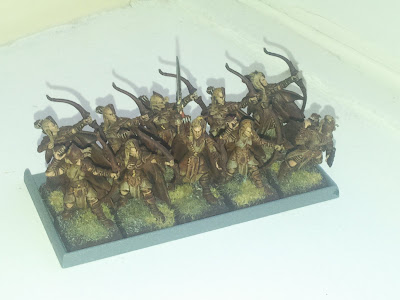 In addition to the Battle Pilgirms, I redid those 10 Wood Elves (an even worse picture), so my output this month hasn't been appalling, but it's been nothing to write home about either. I don't expect to be five pound better off and will be happy to hand over my money at the end of the month.

As I said, I'm a bit bored of Bretonnians at the moment, and I've just signed up for a Saga (a Dark Ages skirmish game) tournament in November, so given the fact that I don't own any suitable models, my October target will be a warband of Vikings - about 30 models - no pressure...

I'll be trying out Saga for the first time in a few weeks and so will review the game then (it had better be good if I'm going to kill myself painting for it).
Posted by Kieron at 13:34