I finally got round to having a game of Clash of Empires on Thursday. Tom was kind enough to guide me through a game - although as a (not very experienced) Warhammer Ancient Battles player I soon found that I didn't need too much guidance - more on that later.

In a typically unhistorical historical game (it's amazing how few historical games actually are historical), my Late Hoplite Greeks faced Tom's Normans. If history's not your thing, about 1300 years separate these two armies, so it's a bit of a mis-match in terms of style. Also being a demo game, I won't go into too much detail. 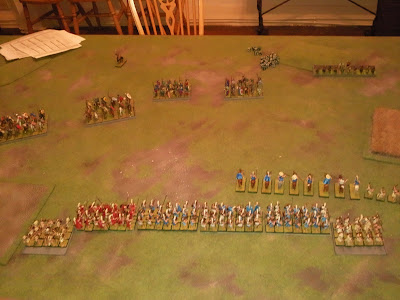 I deployed in typical hoplite formation, although my elites were on my left when they should be on the right (oh, how the academics would cringe). My flanks were supported by peltasts and I had some Cretan archers and light horse out front. Tom spread his heavy horse out to the flanks (there's a surprise) and his footmen and crossbows faced the phalanx.

In short, he advanced towards me. I repositioned a little. He charged the centre of my lines and largely bounced off (as happens when you send horses against a wall of spears). On the right flank, my Cretans shot up one unit of Normans before legging it, whilst on the left my peltasts were put to the sword and it looked as if my flank would be turned. 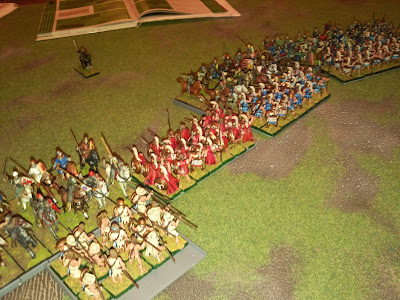 Fortunately, my elites, who panicked when the peltasts broke, gathered their wits and reformed in a great defensive position. Meanwhile, Tom's foot troops and third cavalry unit reformed and charged again...and lost again. This time they panicked the general and the game was over. 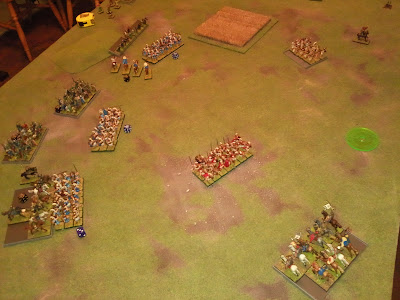 There was more to it than that but I want to get to the review of the game.

All in all Clash of Empires is a good game. However, I was bound to say that as I like WAB and this game seems to be WAB in disguise. The stat line may be different, but the dice you are rolling (and the numbers you want in certain situations) are exactly the same. Even the special rules (like the Greek phalanx rules) give almost exactly the same benefits as in WAB. As an example, I've played a few games with the Greeks against an El Cid Christian army (basically similar to the Normans) in WAB and they played out almost exactly the same as this one - it was so similar that felt like deja vu in parts.

This is not to say that I didn't like Clash of Empires, far from it. Indeed, some of the difference between CoE and WAB were really good. I liked the opening phases of the game with different command ratings and tactical terrain deployment, and I really liked the commanders' role in the game - the actually command rather than become the superheroes they are in WAB. Also the combat results table seemed to add a bit more variety and interest and the disorder rules add a bit more realism to combat.

Add to this the fact that the support the company are giving to the game seems excellent. There's already a supplement due out and there are loads of free army lists for all kinds of periods available through the Great Escape Games website which is all great for the gamer. Compare this to the well documented lamentable product support for WAB from Warhammer Historical over the years and CoE could grab itself quite a few converts.

So overall, I quite liked it and would be happy to play it again. Indeed if my regular gaming circle picks up CoE instead of WAB, I wouldn't have any problem switching as I think that it will turn out to be a better game. However, I can't shake the feeling that I don't really want to spend money on a rulebook and the forthcoming supplements for a game that is eerily similar to one I already own. CoE is a good game with some nice elements, but it just doesn't bring anything fundamentally new to my gaming table.
Posted by Kieron at 15:26