I'm well chuffed. I got to play one of my 'I must wargame that' scenarios this week and it was a blast. 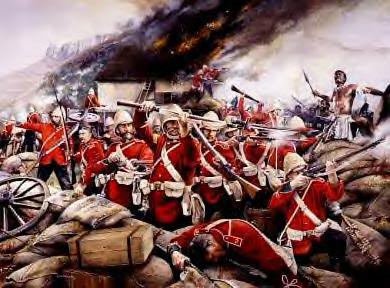 Let me explain. For reasons best know to myself there exists a list (in my head) of games, scenarios and settings that I've always wanted to play. The list includes the Battle of Wilson's Creek (ACW, I got to do that last year), the battle in the chapter 'The Uruk Hai' in Lord of the Rings, and a Punic Wars campaign (I ran one of those recently). Standing high up on the list is the actions of Isandlwana and Rorke's Drift, as detailed in the classic movies Zulu and Zulu Dawn. I've always been tempted to start collecting colonial miniatures, but I'm sure I wouldn't get enough use out of the to justify the expense and time investment it would take to collect appropriately sized forces.

Imagine my delight then, when the opportunity to play this scenario on a huge board with loads of painted models came up at our club. Kev, from 'Kev's Wargames Cabin' (see the link to the right), came to the club with a mahoosive collection of beautifully painted 15mm Zulus and Colonial British and a ready made scenario for a big multiplayer battle using rules adapted from Fire & Fury (a rules set I've not used before). I was in dreamland.

Rather than do my usual style of turn-by-turn battle report, due to the size and scope of the game I'm going to present this in five different sections to reflect the five different British players and their varying objectives and outcomes. I'll follow this with a brief review of Fire & Fury, as I experienced it. It's also worth noting that, by Kev's own admission, the scenario is a tribute to the movies and designed for good game-play rather than a faithful re-enactment of the historical action. 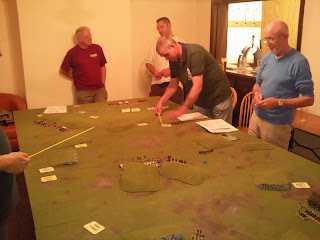 The British Empire had declared war on the Zulus and determined to bring this war to a swift conclusion, Lord Chelmsford the commanding officer invaded Zululand. Making camp at Isandlwana, Chelmsford had divided his force, leaving Colonels Glynn and Pulleine at Isandlwana, whilst taking the best portion of his force to Ulundi, chasing rumours of Zulus. Meanwhile Colonel Wood's sizeable column was moving to meet up with Chelmsford whilst having received news of Zulu movements, Colonels Durnford and Rowlands advanced their native troops to reinforce the main column which they knew was marching into an ambush. Finally, Colonel Pearson had been left to garrison Rorke's Drift and hold it against enemy attack.

The Zulus, meanwhile, were moving about unseen, all that could be seen were dust clouds moving in the distance. Having all seen the films, we all knew that there were lots of them. 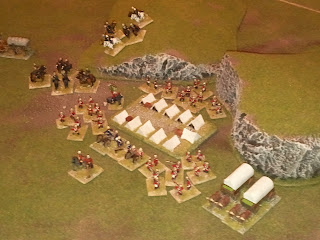 The British Commanders and their victory conditions were:

We needed to achieve three of these objectives to win the game. 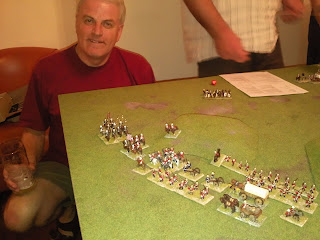 Accompanied by the cream of the British army, the 'honourable' Lord Chelmsford was sure that he knew where the Zulus would be. He proceeded to send out scouts to explore the nearby dust clouds and discovered several small scouting parties of Zulus. He then proceeded to use the cream of the British army to destroy these small forces and performed in an entirely historical manner and completely failed to march to the sound of the guns (and the cries of "Trev, we're dying here!"). Chelmsford's command survived pretty much intact, but he failed to link up with Glynn. 1-0 to the Zulus. 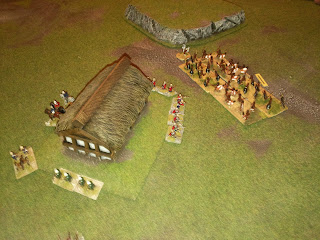 The British troops stationed at Rorke's Drift found themselves assailed on all sides by Zulus, witha large war party repeatedly assaulting the barricades, whilst scouts fired down into the fortified encampment from the hillsides. Despite taking losses the dismounted cavalry and artillery managed to sweep away the scouts in the hills, whilst the infantry held firm behind 'a few feet of mealy bags' and drove off wave after wave of fearsome Zulu's. With a less than appropriate Michael Caineism of "Your only supposed to blow the bloody doors off!" Matt held firm. We were all square at 1-1.

LOST IN THE WOODS

Colonel Woods' column never really got a chance to even move to aid Glynn as they were immediately ambushed by several large forces of Zulus. Despite forming a presentable line (and even using their wagons as makeshift barricades, Glynn's left flank was quickly overrun despite the presence of a gatling gun. The right made a brave stand but were assailed on all sides and eventually cut down to a man. A great cry of "ZULU!" went up, but that was just JP getting carried away. 2-1 to the Zulus.

"THOSE NATIVES ARE RUBBISH"

Having all been told how bad the Rowlands' Natal Native Contingent were, it was unsurprising that they were the unclaimed command before the battle. Being the commander closest to the N.N.C., I took charge of this force. Early on, a small force of Zulus appeared on their flank, and so thoroughly expecting to die quickly I formed lines and awaited the inevitable. To my, and the Zulu's surprise, the N.N.C. not only held firm but drove back the Zulus several times. Eventually the Zulus were driven off by a surprise charge by the dismounted Border Horse. Realising that I still near to the board edge and having been attacked I could achieve a victory point by simply naffing off, I did just that. We were back at 2-2.

The command I had chosen was Durnford's Horse, mainly because I wanted to play Burt Lancaster. So complete with dodgy Irish accent I mounted up and galloped to relieve Glynn. Somewhat surprisingly, my three small units of irregular cavalry made it to Isandlwana. this was largely due to most of the dust clouds in my vicinity turning out to be just that, dust clouds. Therefore the first action Durnford saw was against the Royal Impi at Isandlwana itself. Having completed part of my objective I'll maintain the suspense and let the action move to... 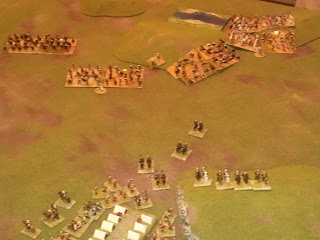 Things began badly for Colonel Glynn when his water wagons upon arriving at the watering hole, discovered thousands of hidden Zulus in the form of the Royal Impi. Despite the escort getting back to warn the camp and some form of defensive lines being formed, things went from bad to worse when another Impi appeared on the other side of the camp. Worse became awful when it appeared that due to a dice (suspiciously offered by a Zulu player) that could roll nothing but ones, the British couldn't hit the side of an elephant and were unable to slow the Zulu advance. 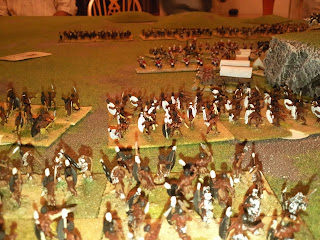 Things then went from awful to terrible when Brian realised that both Chelmsford and Woods were either unable or unwilling to ride to his rescue. The situation briefly dropped back down the awful when Durnford arrived, although popped back up to terrible when it turned out that Durnford's men couldn't shoot either. Terrible finally became catastrophic when the Zulus overran the final line of defence (which consisted of two officers and a rocket team). With the loss of the Sikali Horse, the remains of Durnford's command was forced to beat a hasty retreat. 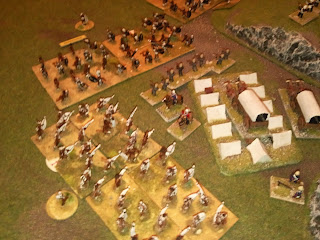 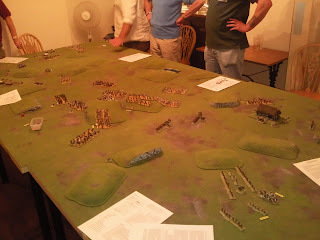 The whole game was brilliant. The scenario was well constructed and the game was played in an excellent atmosphere. With the film theme playing in the background, lines from the films being quipped and the British generally getting slaughtered, a good time was had by all. A big thank you to Kev for going to the effort of getting all his stuff to the club.

A Quick Review of Fire & Fury

I've never played Fire & Fury before (although I did own the rules many years ago - part of the whole Wilson's Creek thing) and I have to say that I was pleasantly surprised. I remember being slightly mystified by rules mechanisms completely beyond the frame of reference of a Warhammer junkie.

However, with people who know the rules to show you the ropes the rules proved quick to pick up and relatively intuitive. I appreciate that Kev had adapted the rules slightly, but I enjoyed the command and control mechanisms and the way in which the Zulus attacked in waves felt entirely appropriate. I'd be keen to try Fire & Fury in its intended ACW setting and now that I have a loose understanding, picking up the rules should be fairly easy.

As well as the game rules, I also enjoyed the scenario rules as the separate objective made us (well, most of us) have to ride into danger and act in character. The best historical game I've played in quite some time.
Posted by Kieron at 13:39