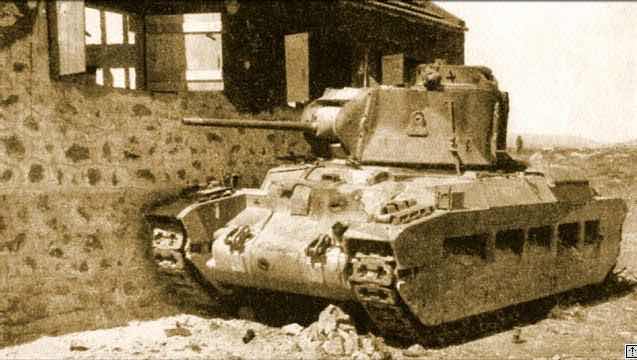 After our initial forays into the Fallschirmjager assault on the Maleme Airfield during the invasion of Crete in 1941, Pete and I returned to the action as the soldiers of the 22nd New Zealand battalion made a valiant assault against their own defences to recapture the airfield.
We were taking the scenarios from an article in Wargames Illustrated #371 and according to our rudimentary campaign scoring, honours were all square at 2-2. 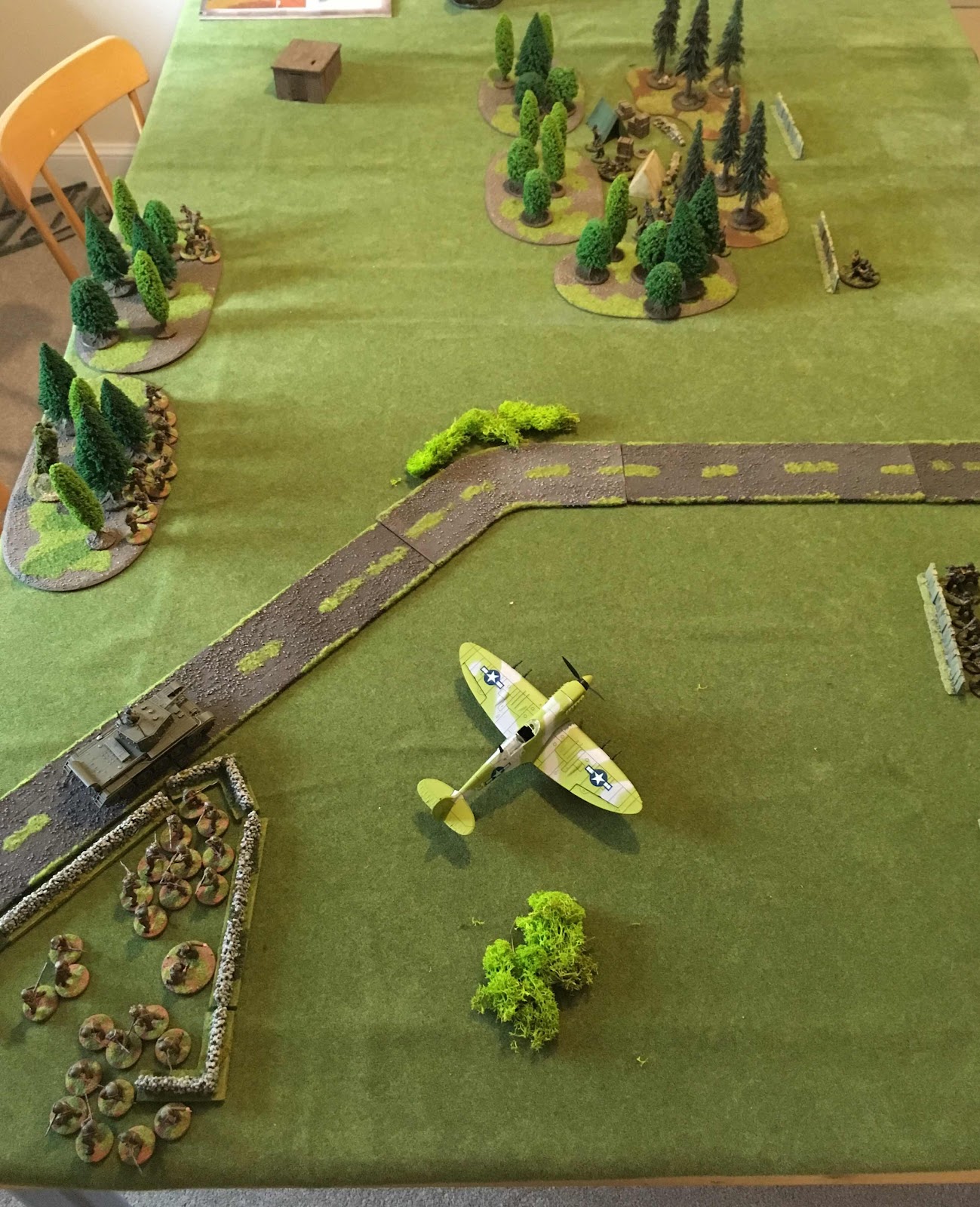 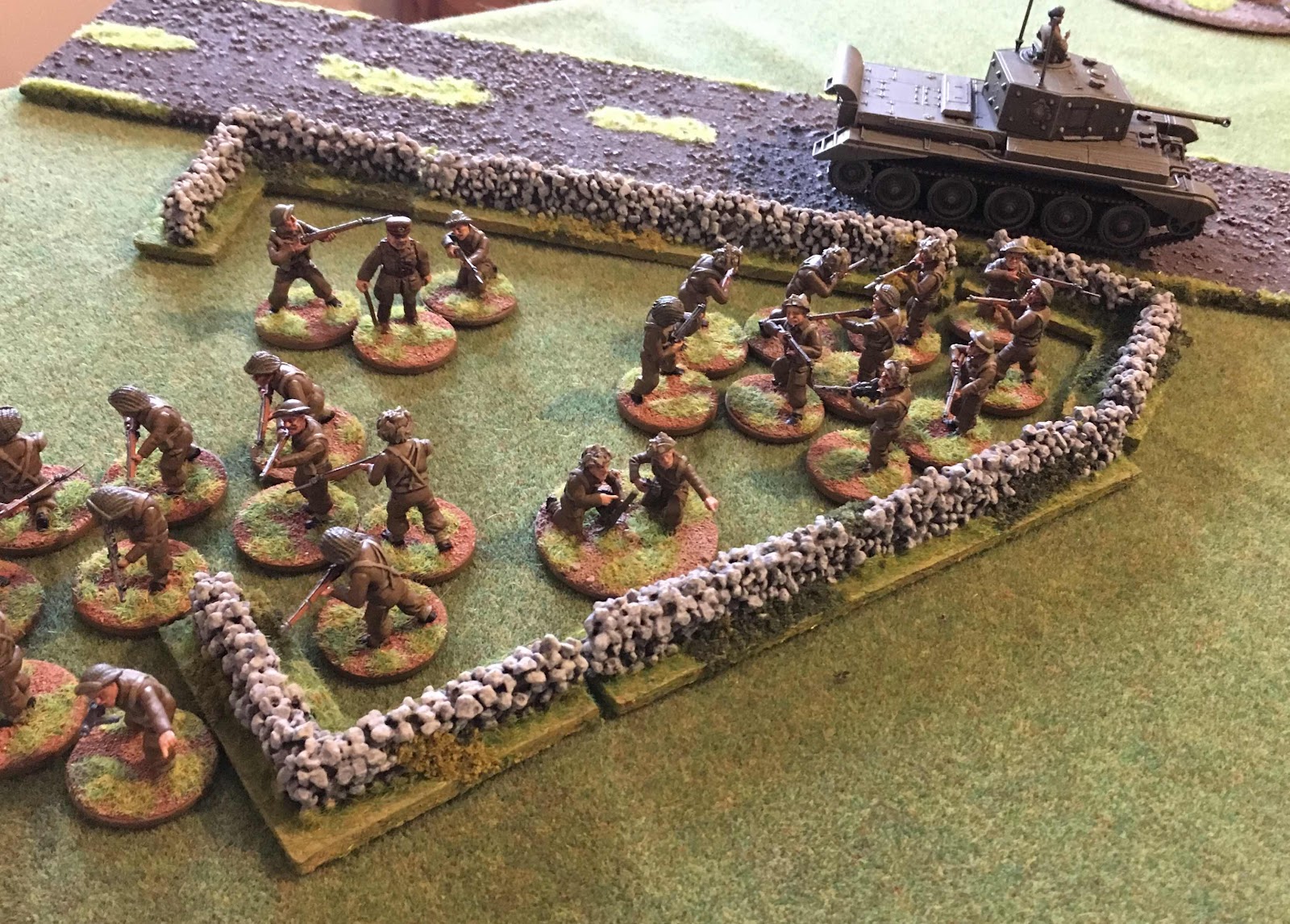 The New Zealander’s mass near the airfield, ready to assault. 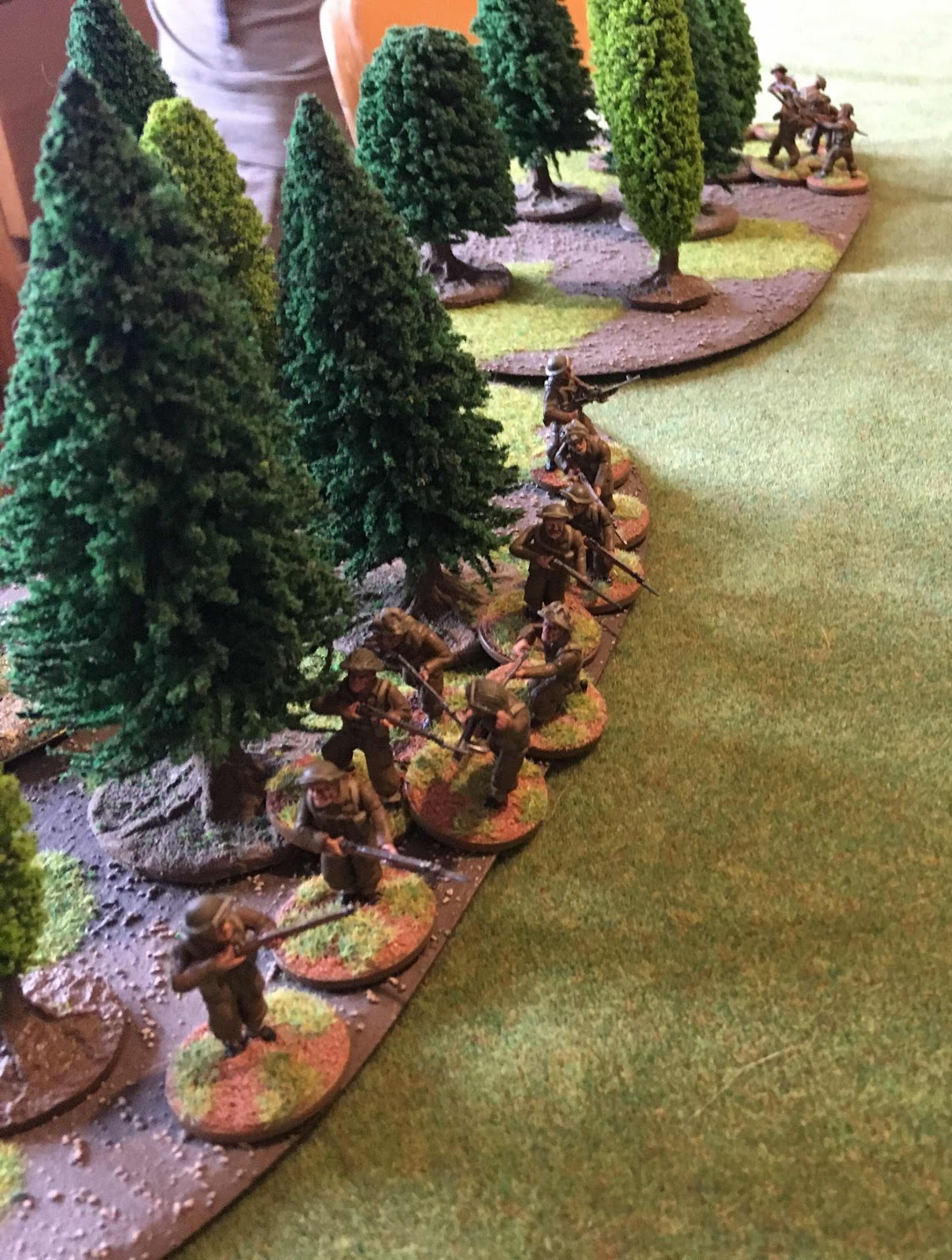 Elsewhere, there is movement in the tree line. 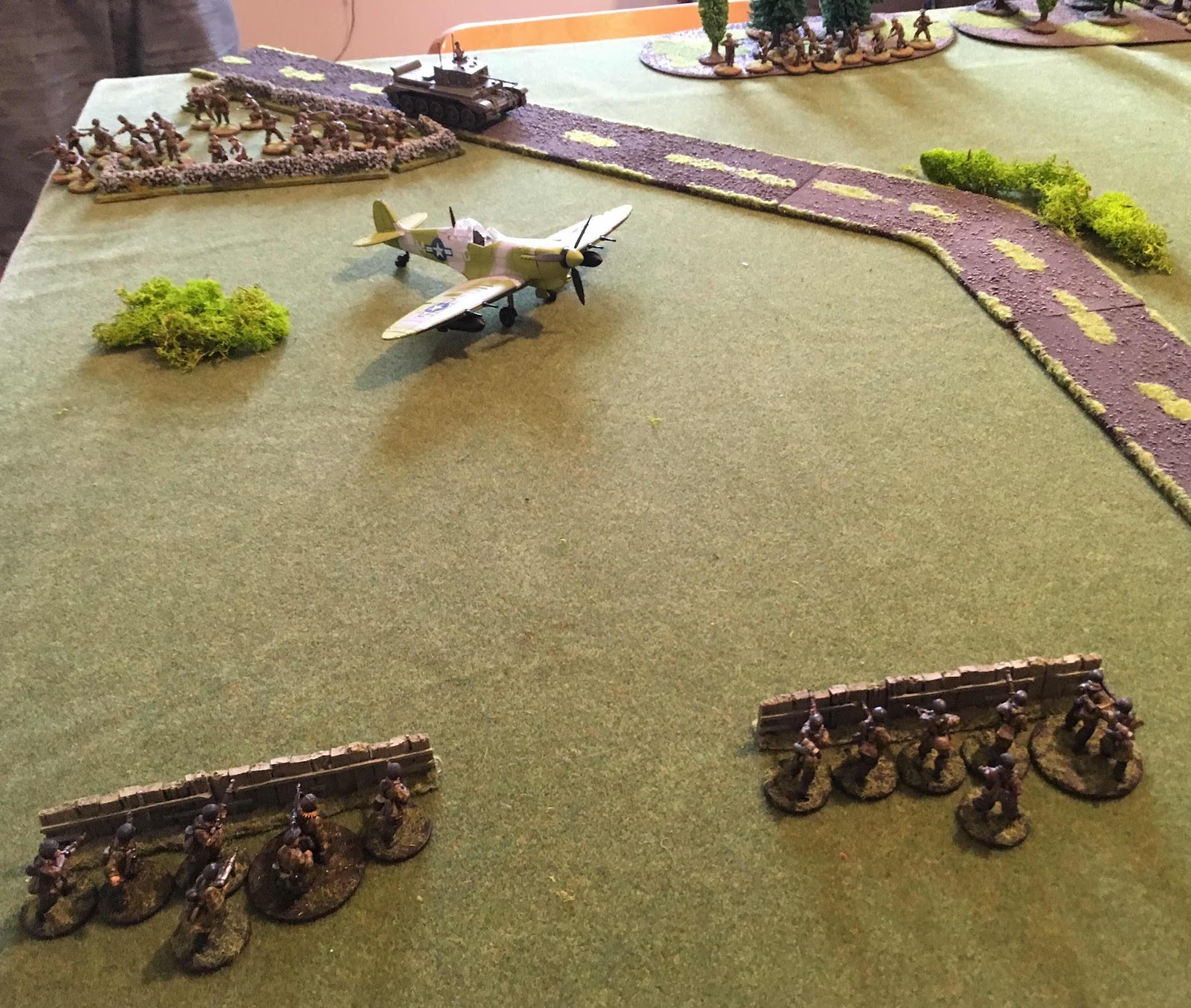 The Germans prepare for the coming attack in their newly captured trenches that look a bit like walls. 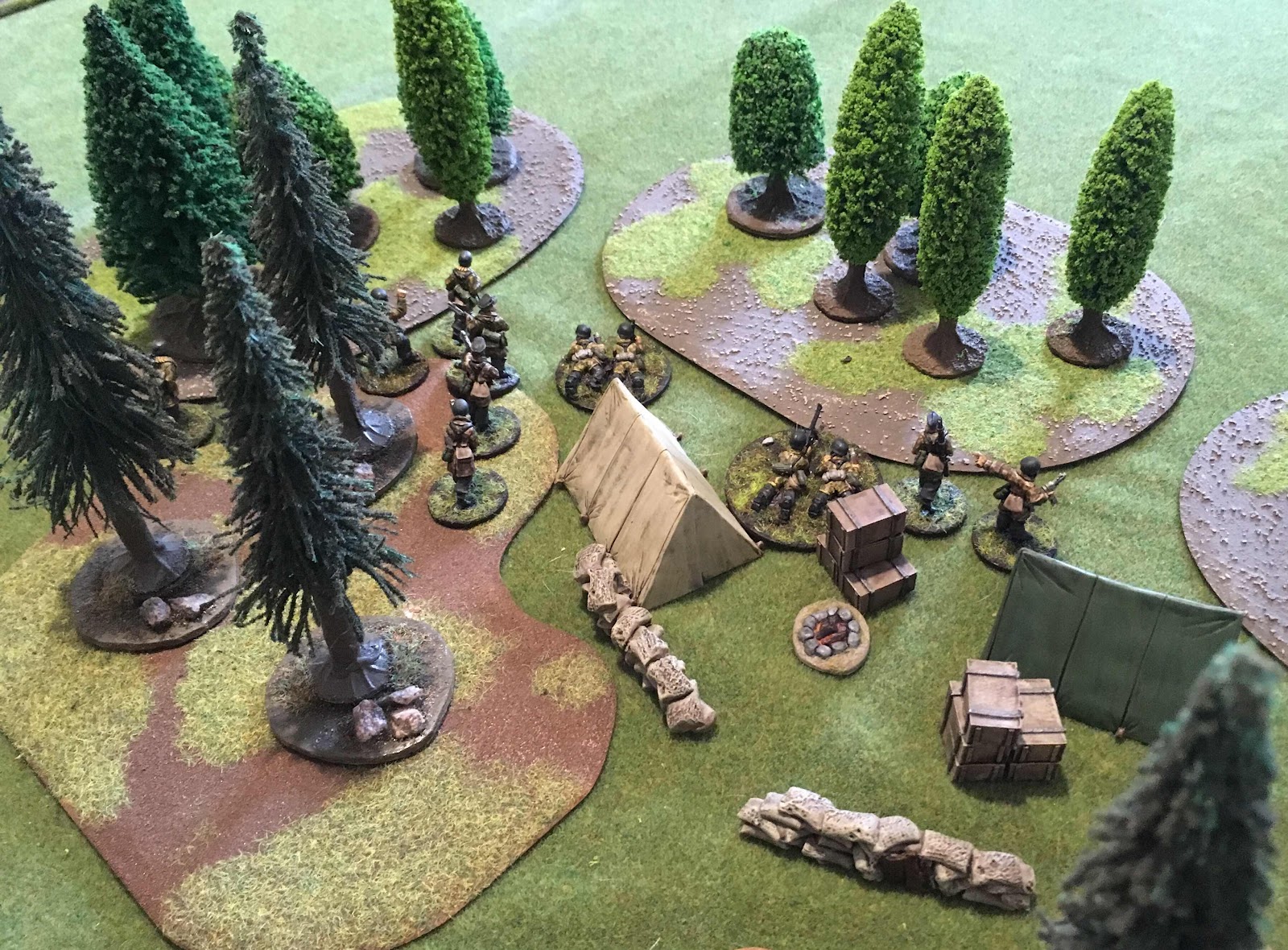 Reserves are called forward from the formerly British camp. 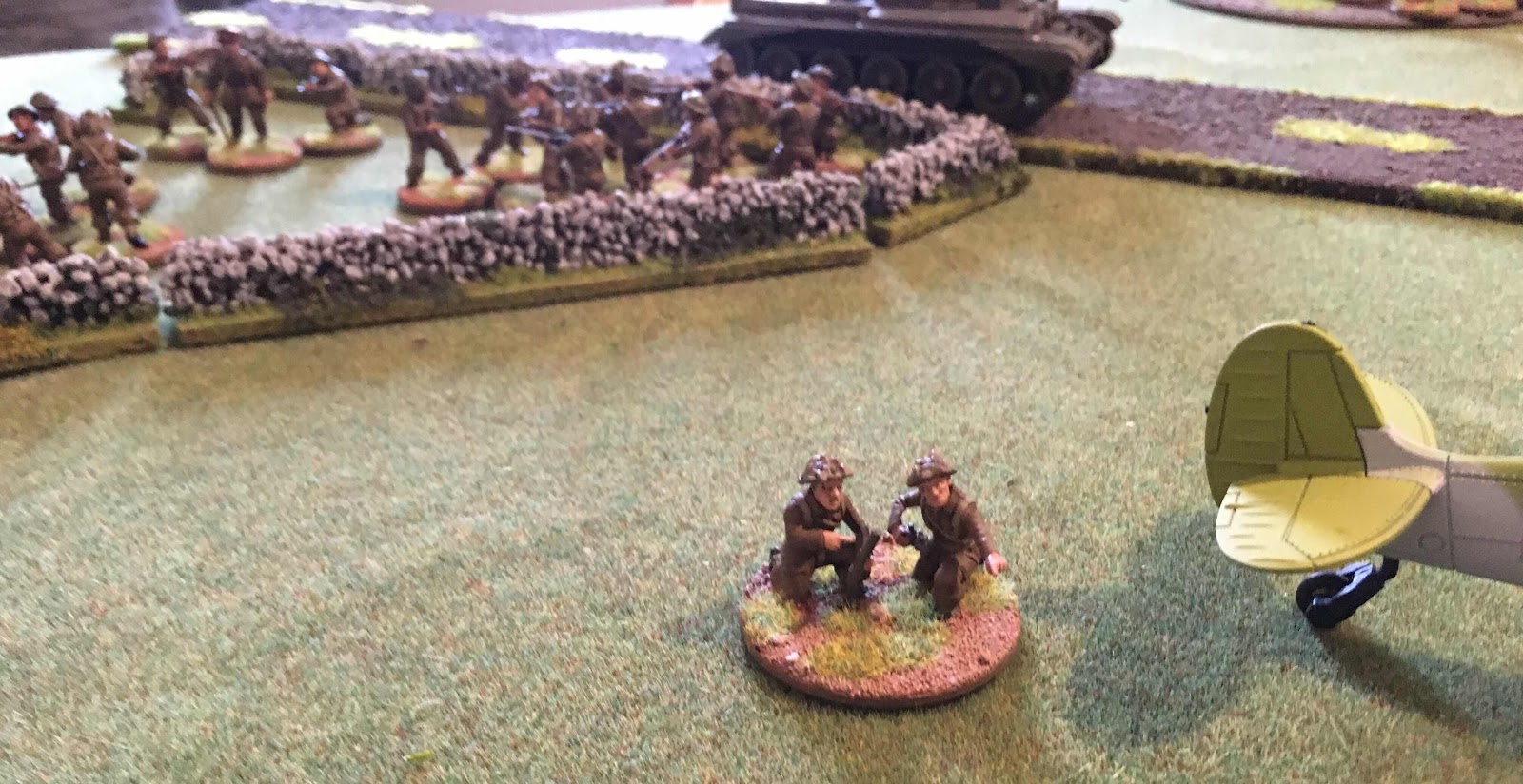 The Kiwi Mortar team are the first to advance in a bold move, but are shot down for their daring. 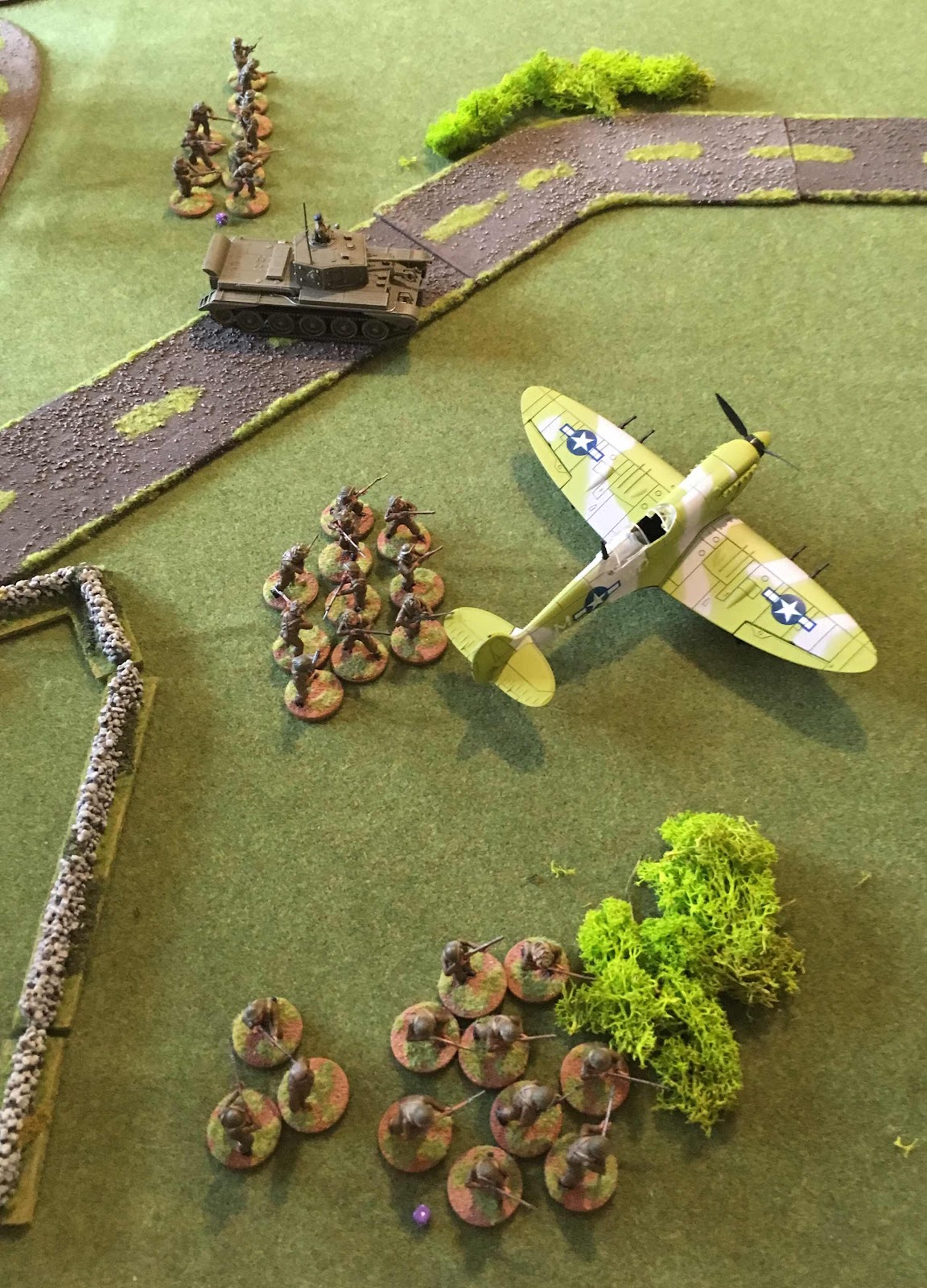 The New Zealanders move up en masse, making use of whatever cover they can find, whilst the Matilda provides supporting fire. 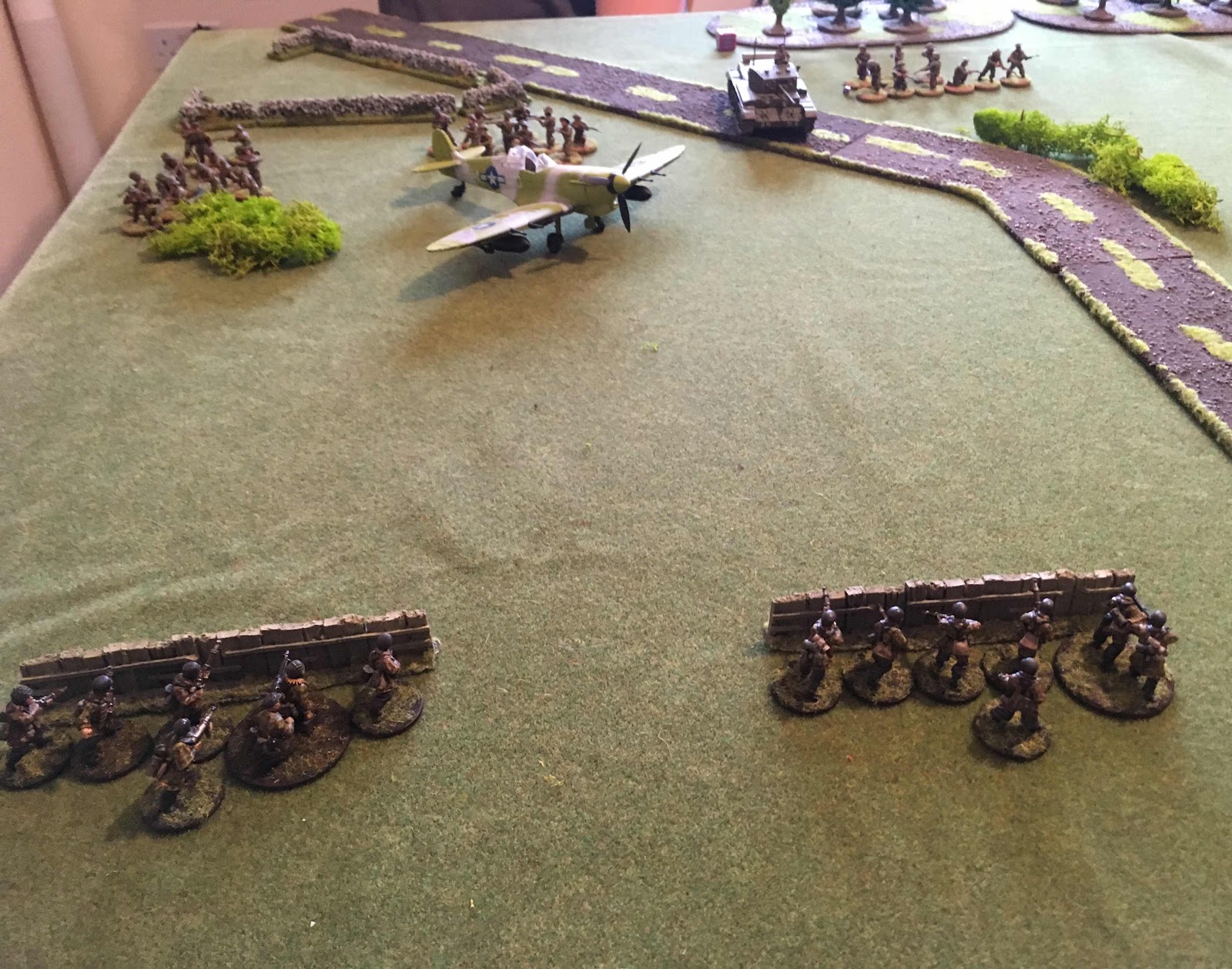 They are met by largely ineffective for from the Fallschirmjager in the trenches. 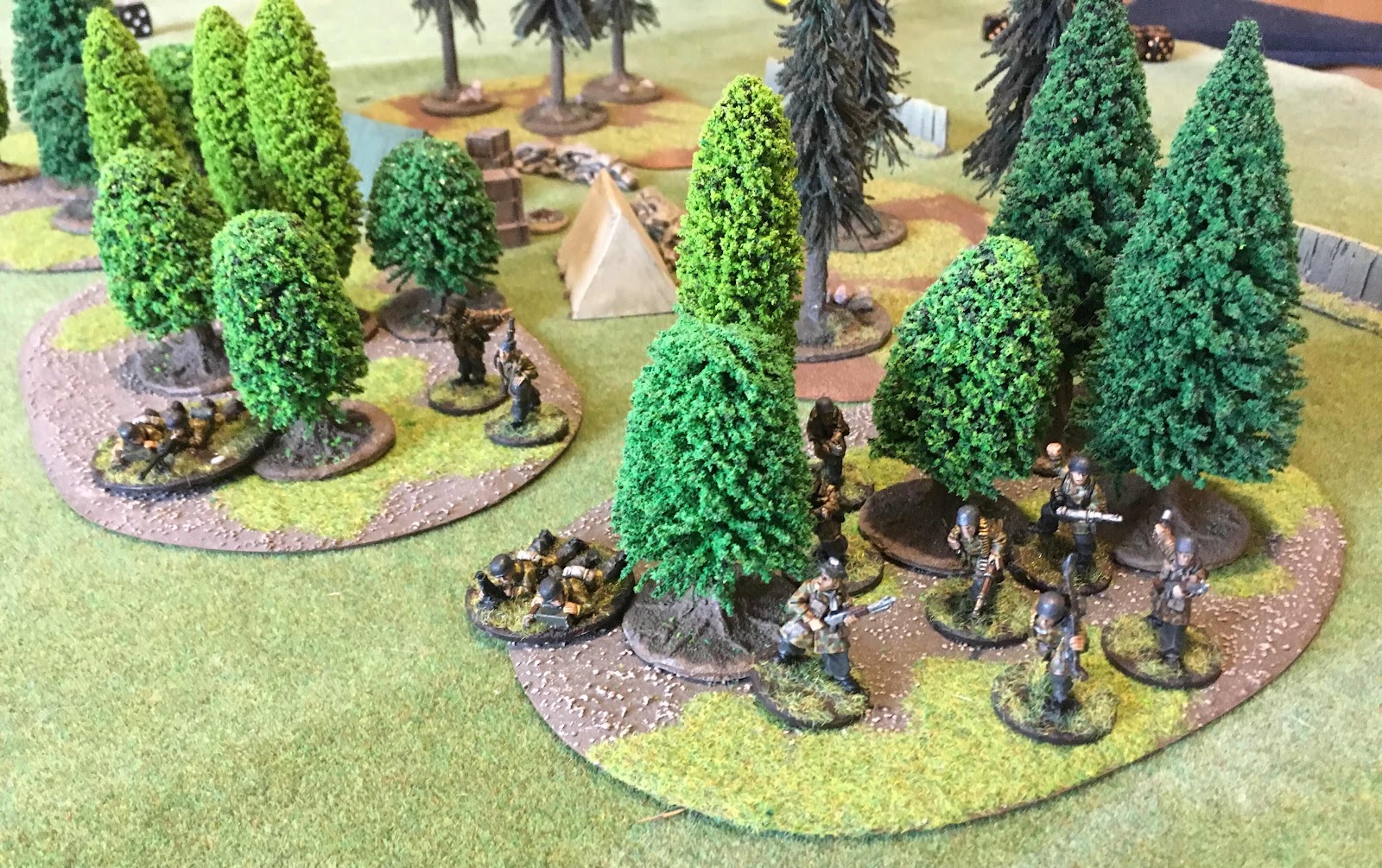 However, more Germans arrive at the tree line and add to the weight of fire. 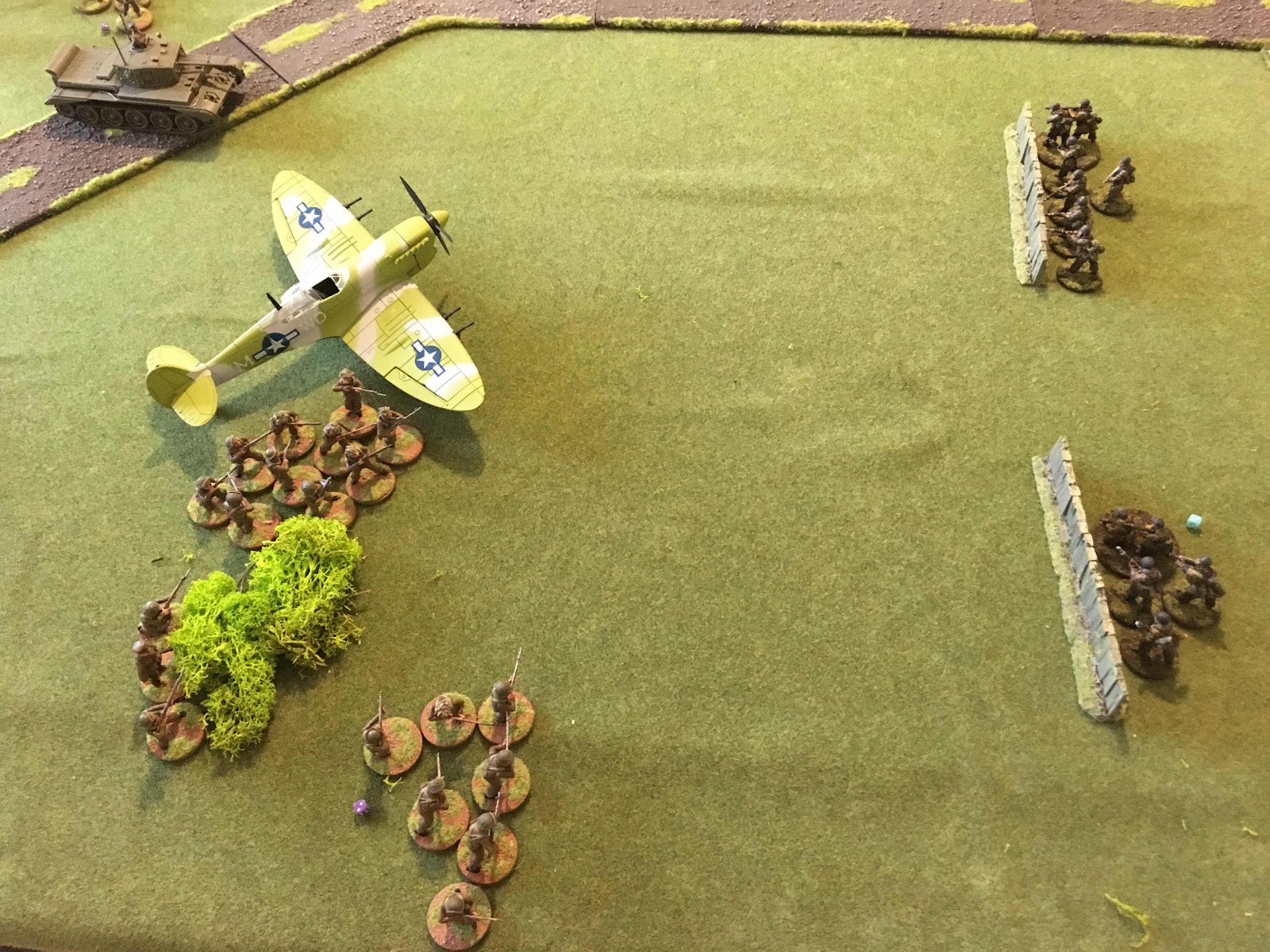 With the Matilda stranded for a turn, the assault edged forward, firing as it comes. 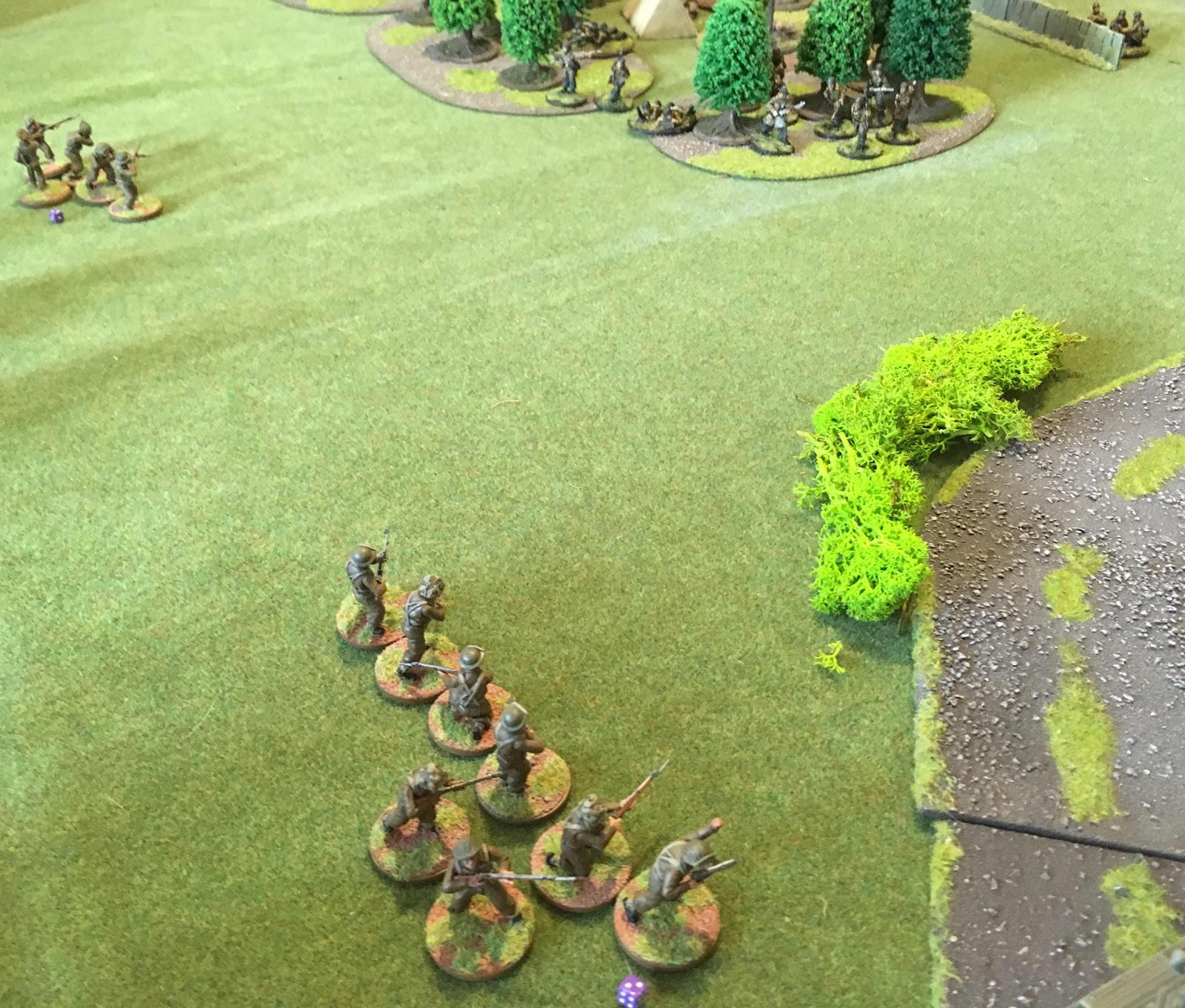 Accurate light mortar fire pins one of the Kiwi squads in place, whilst the RAF are similarly held by rifle fire. 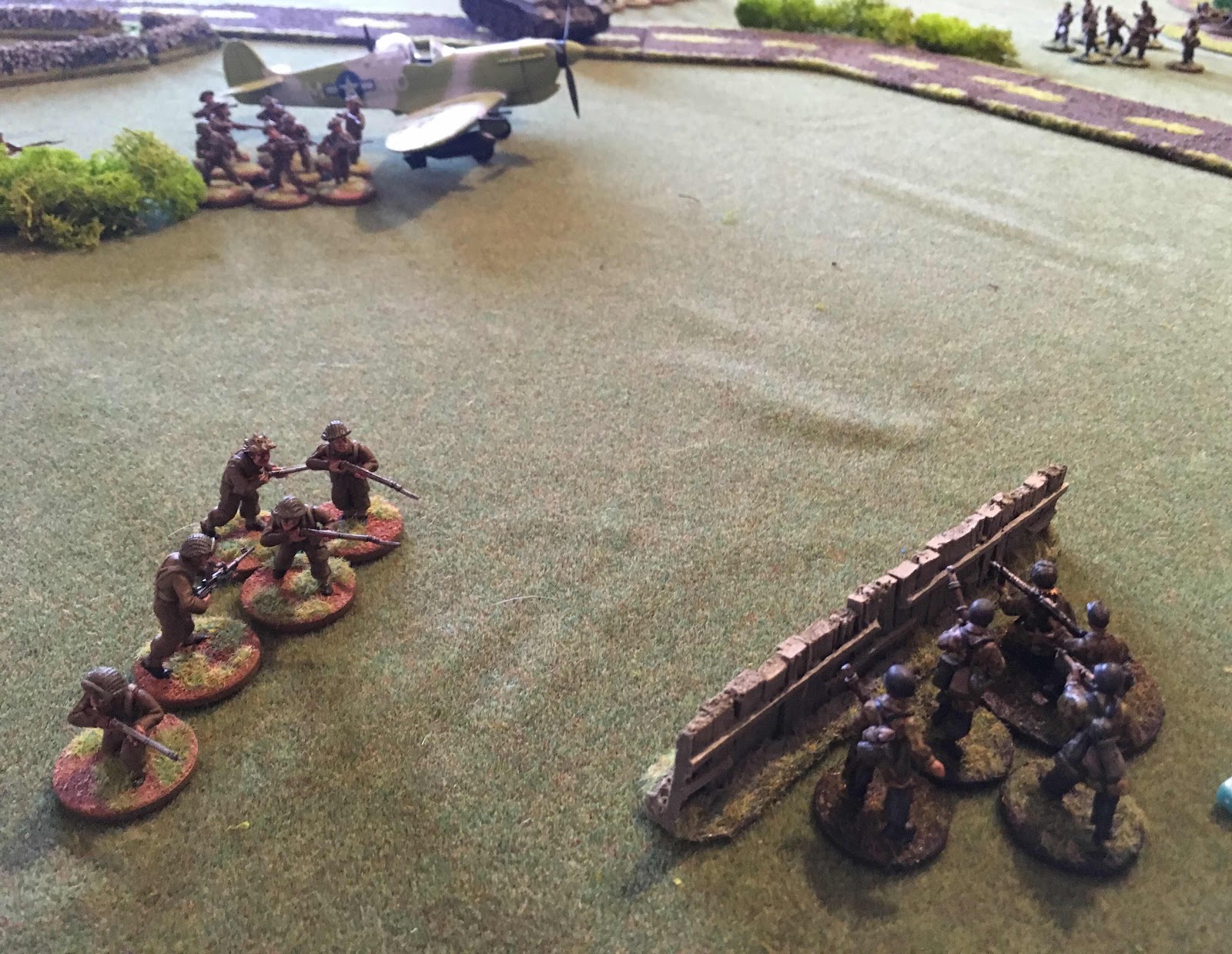 One New Zealand squad gets close, but their assault fizzles out under sporadically successful fire. 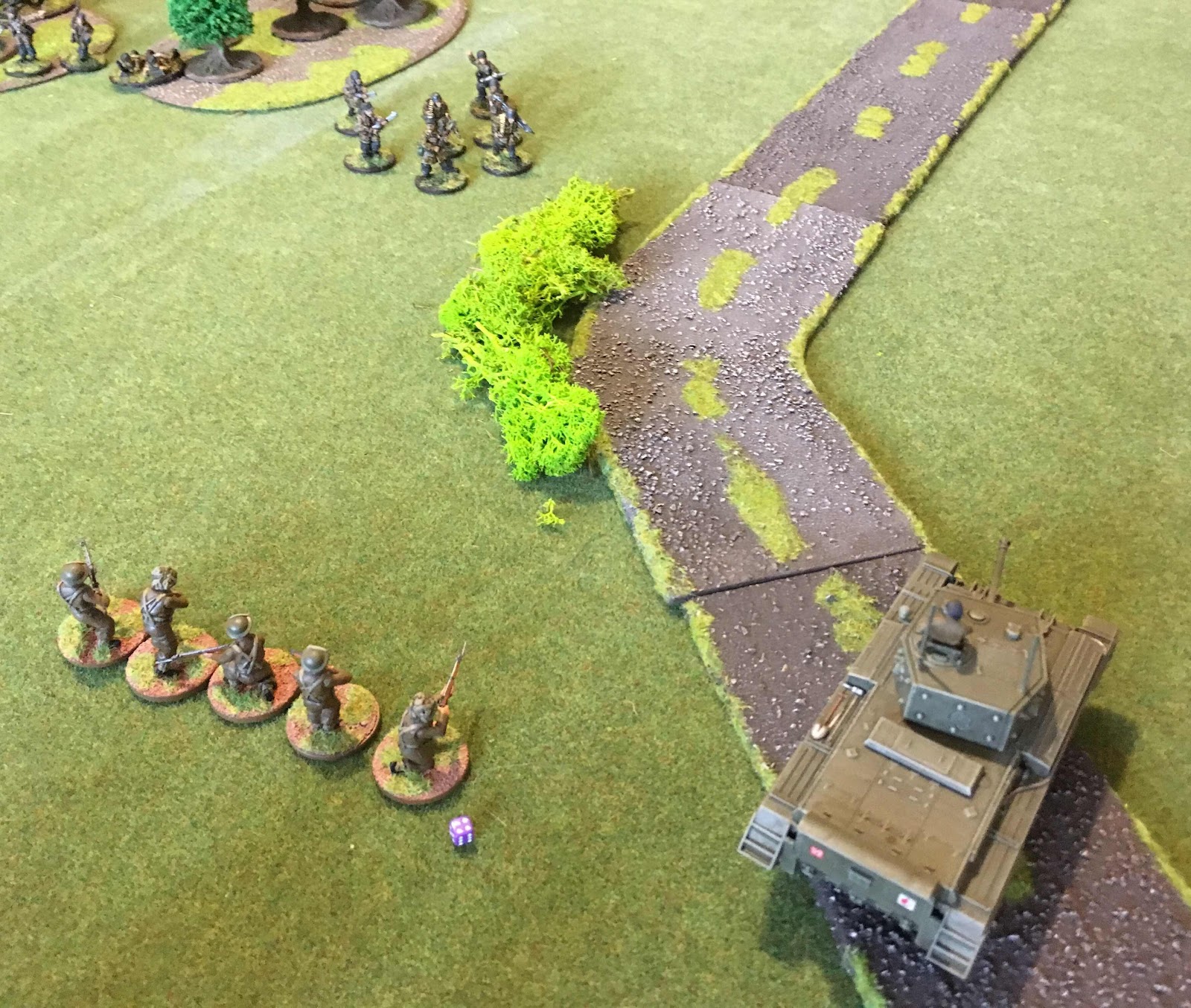 With the Kiwis on the left pinned, the Fallschirmjager squad in the trees takes the fight to them. 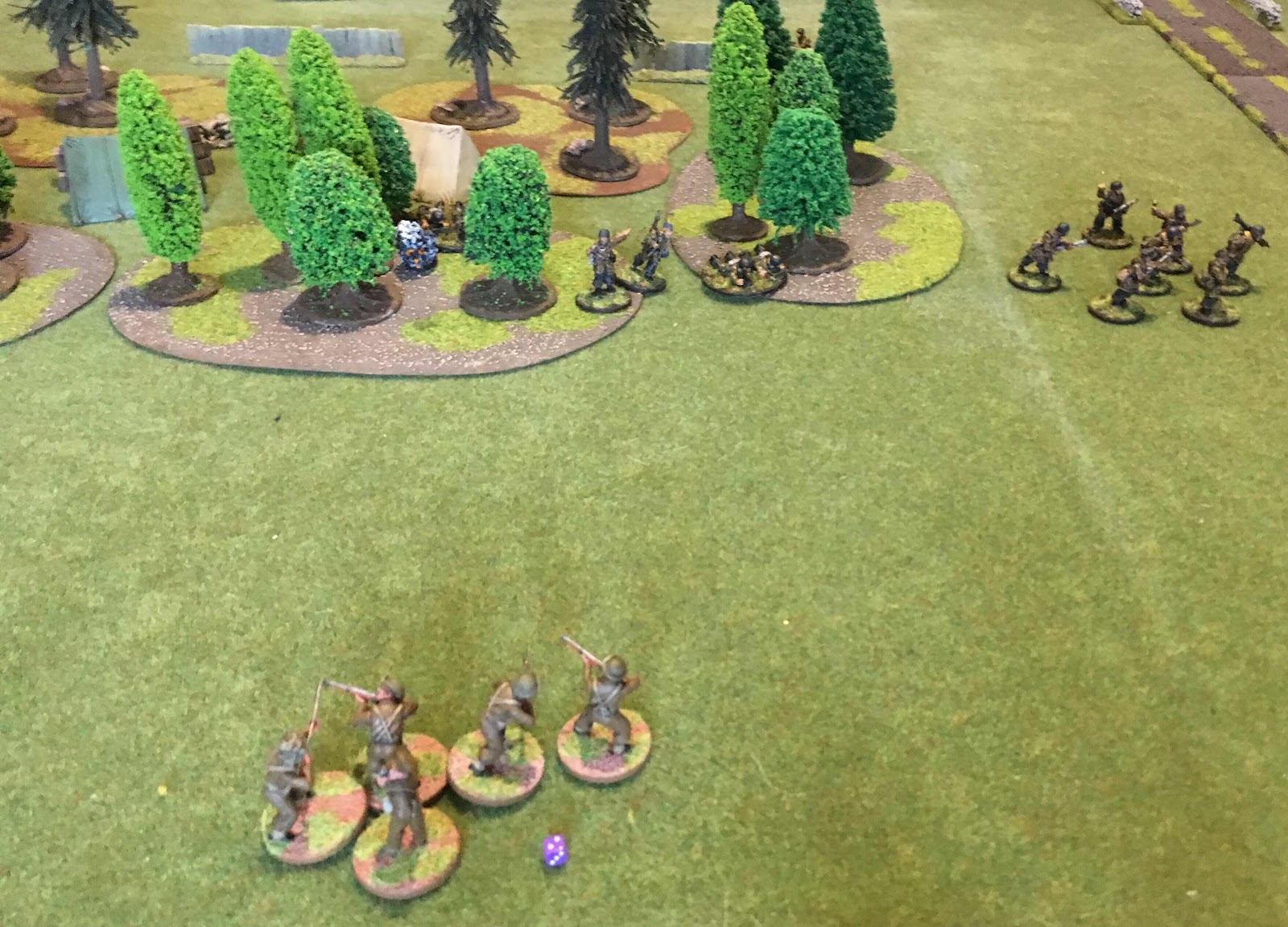 The RAF fail to muster the courage to charge. 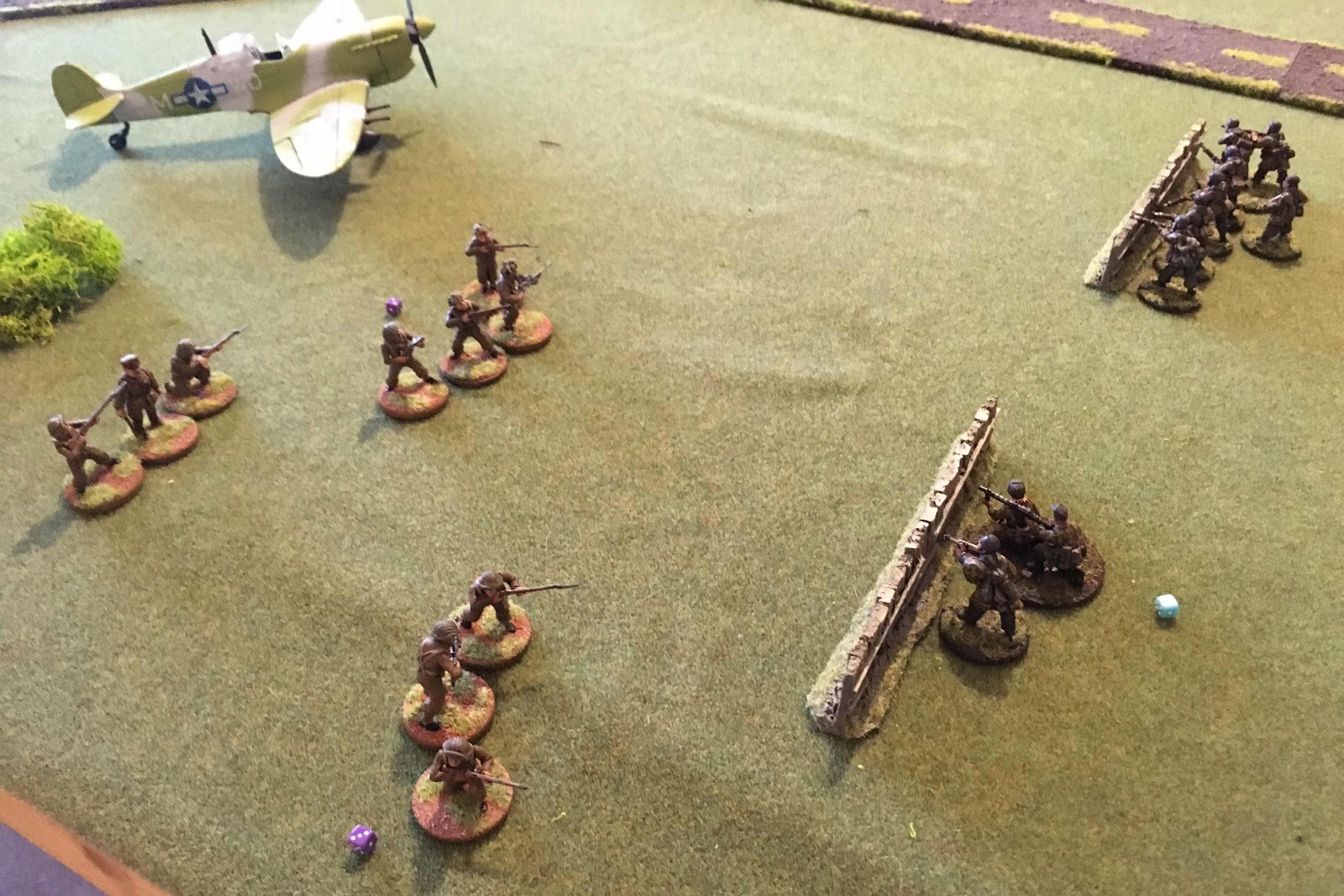 The second New Zealand squad’s assault loses impetus when it is hit by an air strike. However, despite low numbers, one of the squads of Fallschirmjager looked vulnerable.

The Fallschirmjager squad from the camp risks fire from the Matilda as they rush to support their comrades. 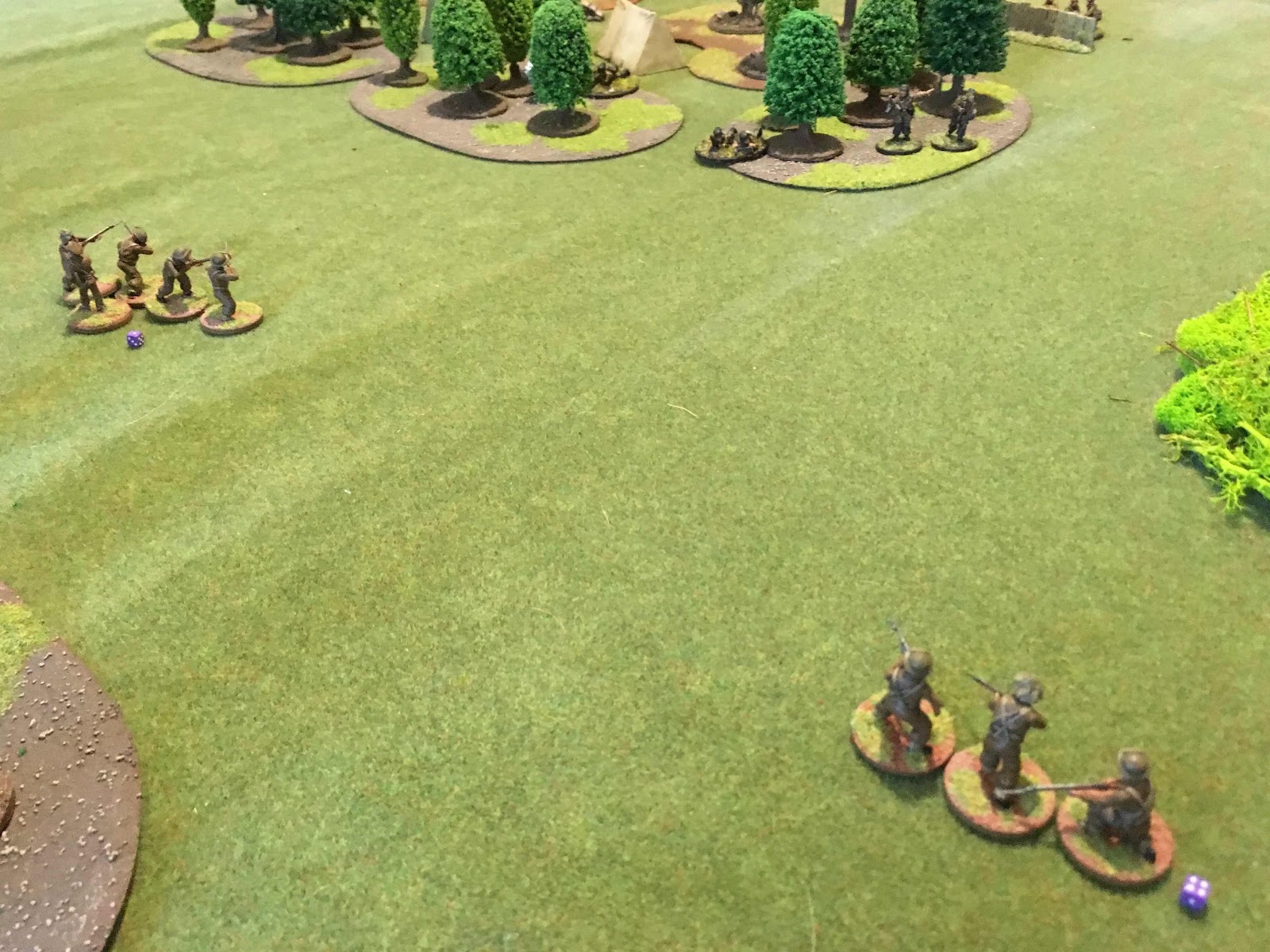 The British left behind to wither under accurate Mortar fire. 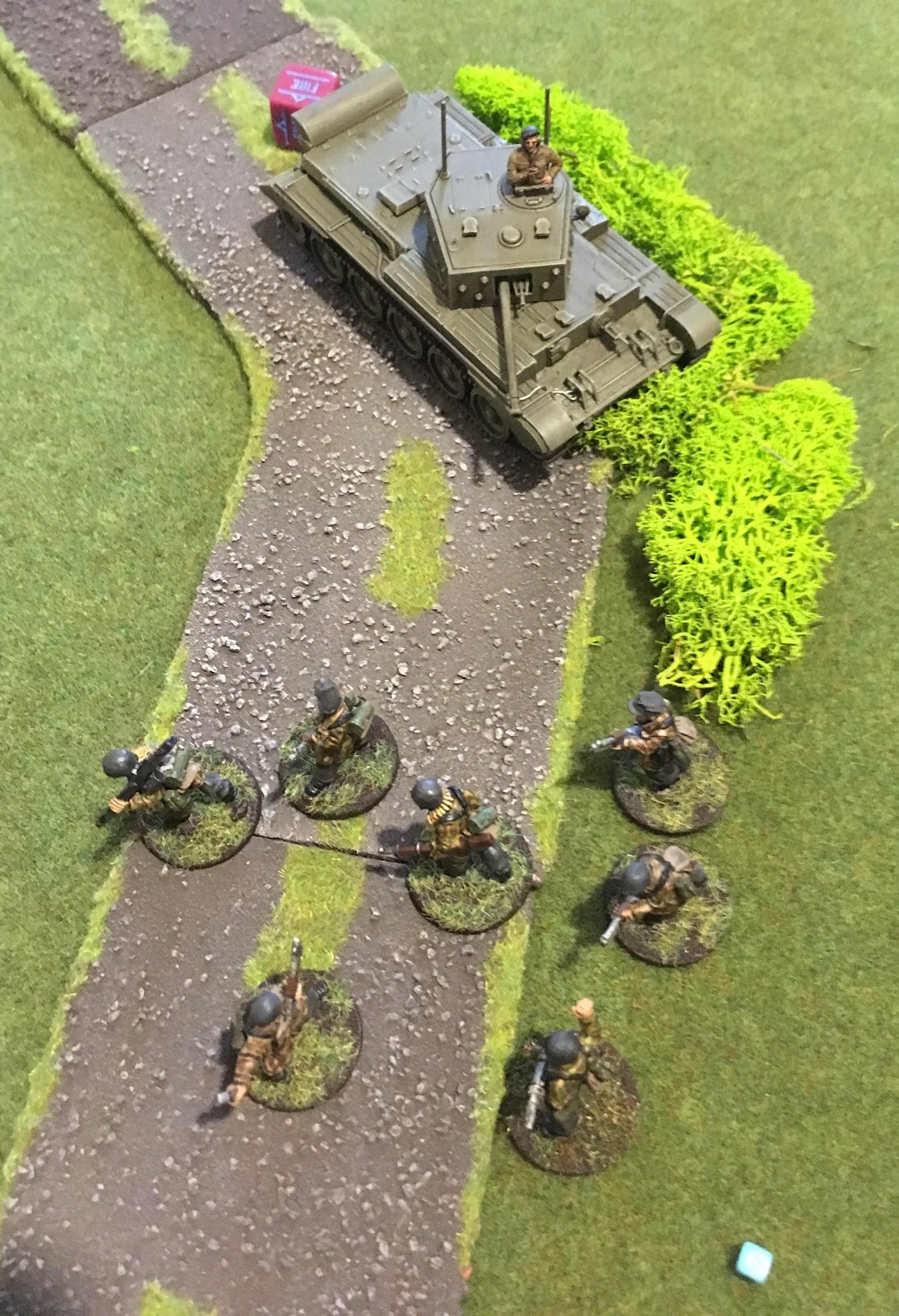 However, despite the New Zealanders melting away, the reserve squad freezes on the road under point blank fire from the tank. 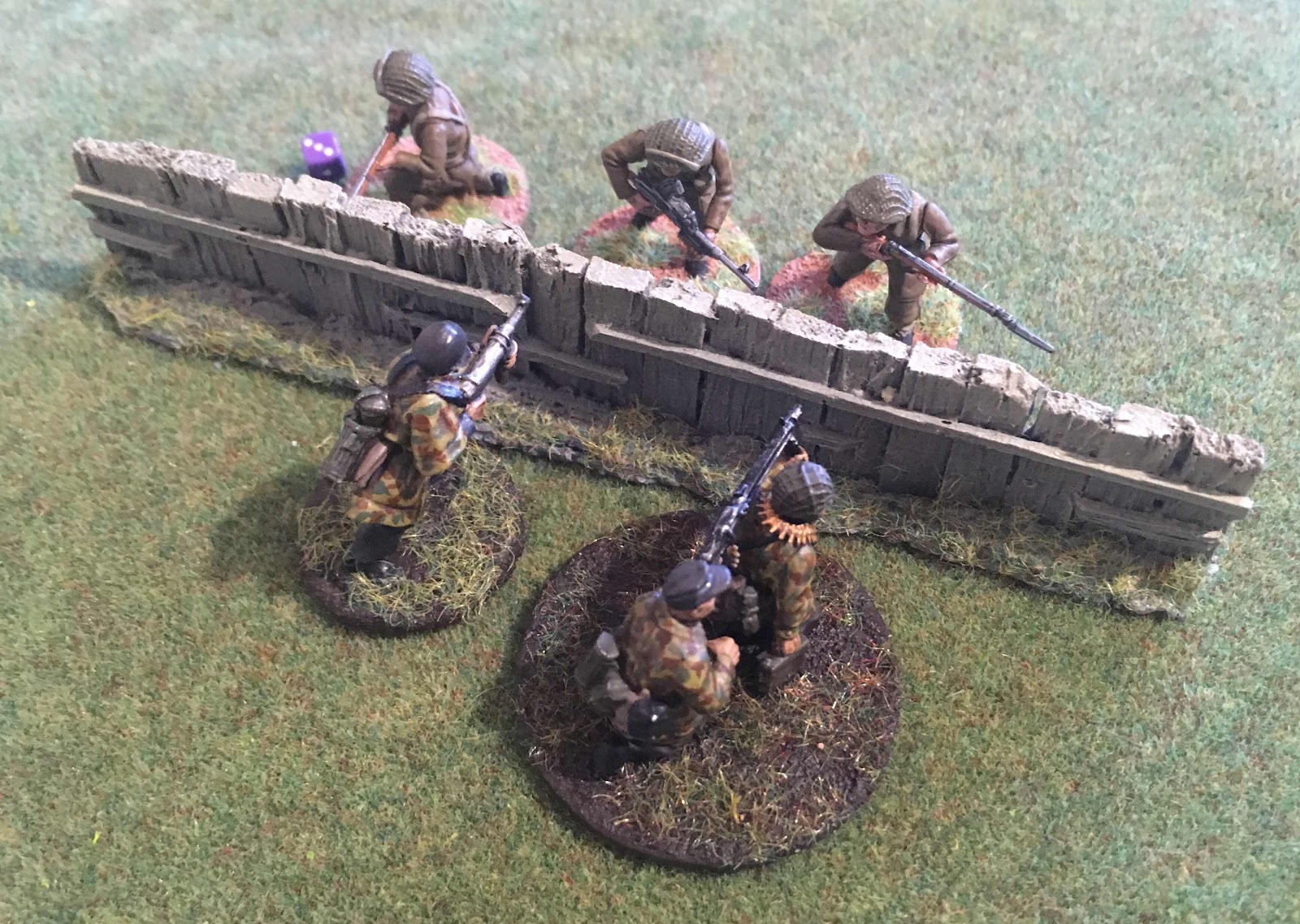 A handful of Kiwi regulars assault the German veterans in the trench and miraculously succeed in grabbing their first objective.
There’s now a break in the pictures as things got exciting.
The Fallschirmjager in the second trench assaulted the Kiwis in the first and madehezvy weather of it, losing half their numbers.
On the final turn, they also assaulted the New Zealand officer (who was in the same trench) and made a complete pig’s war if it, getting wiped out by a man with a stick.
My only chance to stop a Kiwi victory was to activate the pinned unit in the road and try to kill the exposed unit before it advanced to the scoring zone at the edge of the table. 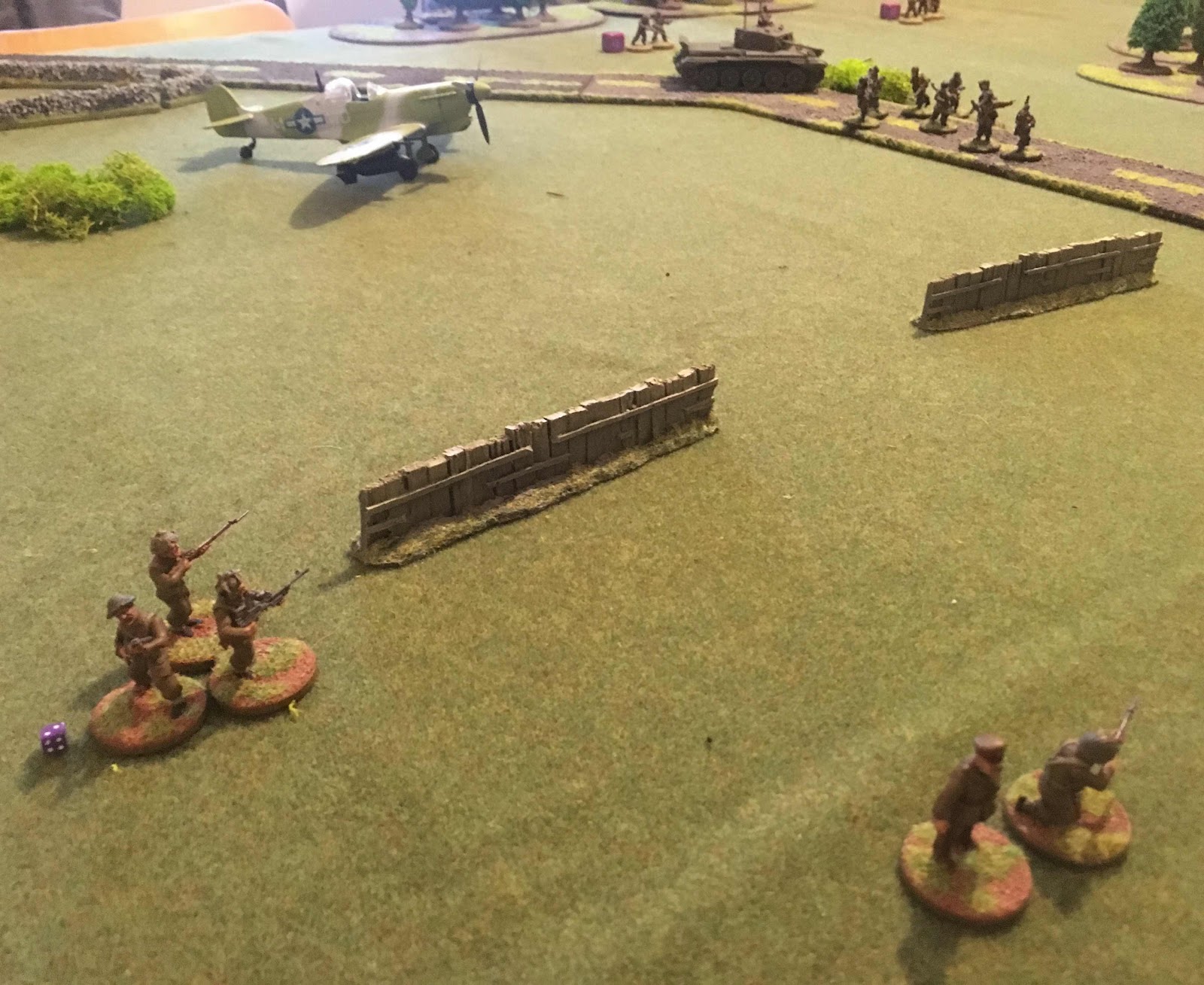 My unit failed it’s orders test! S**t!
However, in a fabulous display of chivalry, Pete also failed his orders test with what was left of his remaining squad, and his officer had to leave the captured trench to grab the more valuable objective.
With no trenches under Kiwi control, but their officer behind German lines, we’d managed to achieve a pyrrhic draw, 2-2.
This was actually an extremely tough scenario for Pete, to advance over open ground against a similar number of dug in veterans with unreliable support was a tall order. If my shooting hadn’t been so ineffective, it could have been over quickly. Furthermore, if my assaults had gone anything like with the odds, Pete would have not been able to hold on to his gains.
After playing three of the four scenarios from WI371, I’m not sure how much they’d been tested for balance. However, as a historical venture, they were fun. Primarily we played this campaign as a focus for building up our new armies and that objective was achieved so all in all it was a success.
I’ve not been doing much painting recently, but I have sold another 3 Space Marines that came with Conquest magazine when I was after cheap paint. Unfortunately, Warlord Games has extra phases to their sprue sale and so I bought some Cybermen (13 models to a sprue!) and a few more Terminator Endoskeletons, and so the picture has got a touch less rosy:
Acquired: 68
Painted: 50
This isn’t as worrying as it looks, as the number includes 14 Cybermats that are very small and really just need a coat of silver and a wash, so they’ll take no time to do.
I’m slowly getting back to painting, soexpect progress to pick up in the next few weeks.
Posted by Kieron at 15:38