Way back in the dim and distant past of last September, you may remember Pete and I optimistically starting to play through the Stalingrad campaign book for Bolt Action.
After failing to get my forces across the last bridge over the Don, it became apparent that I would need help delaying the Germans. Stalin was famously aided by 'General Winter', whereas I recieved support from his junior officer: 'Major Pandemic'. 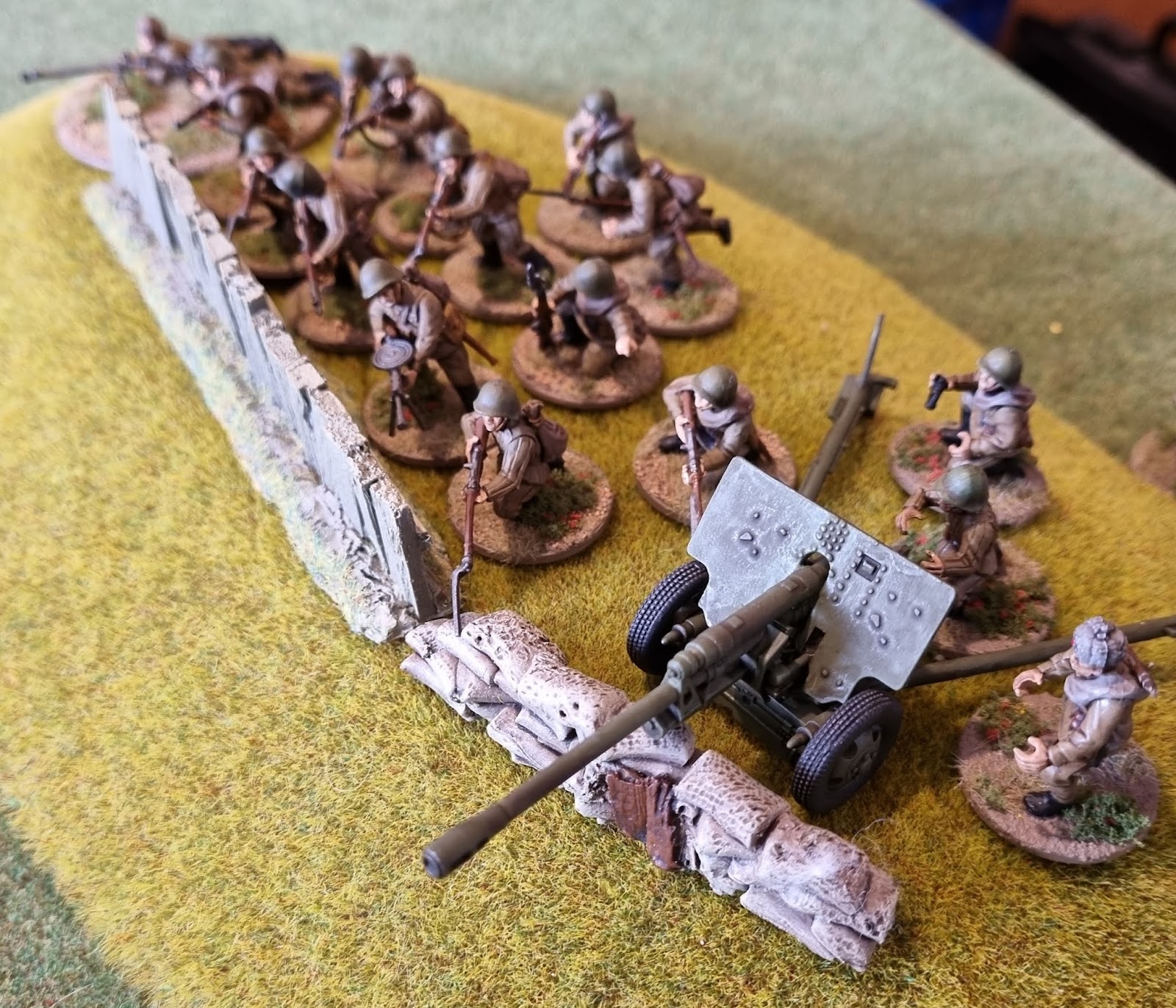 Having successfully held up the Nazi war machine for nine months, the Major has now retreated (hopefully we won't see him again), and now it was the turn of poorly trained infantry to stem the tide. In scenario 2 of the campaign, Pete's Germans would have to force a crossing of the Don against my numerically inferior forces.
In game, victory points would be gained by destroying enemy units and having units remaining on the eastern side of the river at the end. 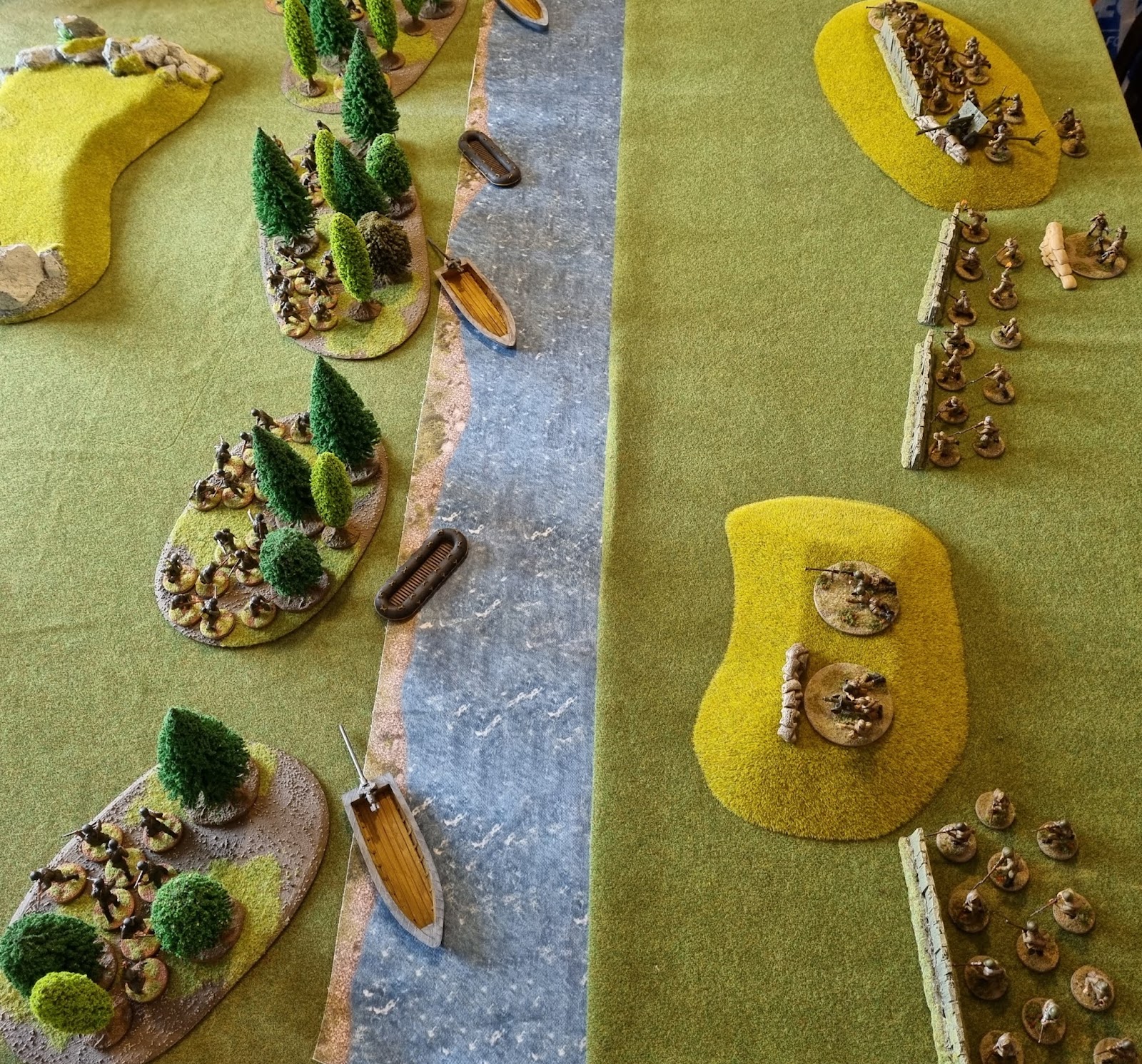 To alleviate some of the problems of being outnumbered, most of my 500 points of defenders would be inexperienced. However, they would be helped by being dug in and hidden (although we completely forgot about the latter), and I'd get my usual bonus unit, which is always more valuable in smaller games.
My army was as follows;
2nd Lieutenant + 1 man (Reg)
2 LMG Squads (Inex)
Rifle Squad (Inex)
MMG Team (Reg)
Medium Mortar Team (Inex)
2 Anti-Tank Rifle Teams (Reg)
ZiS-3 Anti-Tank Gun (Reg) 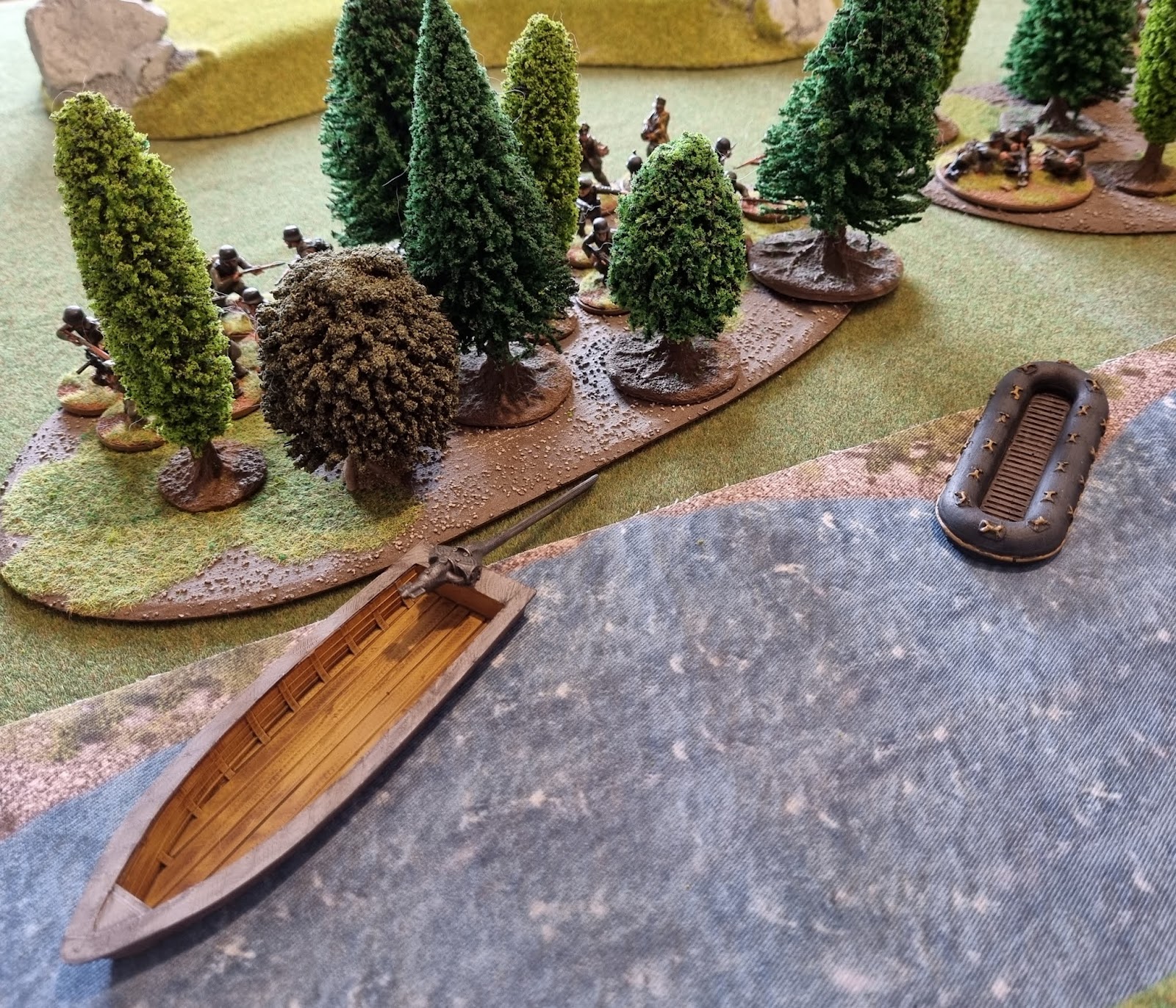 Pete's forces had the advantage in numbers and quality, but he had the not insignificant problem of crossing the river in flimsy boats. He would, however, gain the benefit of a preparatory bombardment.
His army was something like this:
2nd Lieutenant + 1 man (Reg)
4 Heer Infantry Squads (Reg)
2 Heer Pioneer Squad (Vet)
MMG Team (Reg)
Medium Mortar Team (Reg)
Sniper Team (Reg)
3 Sturmboots (Reg)
2 Schlauchboots (Reg) 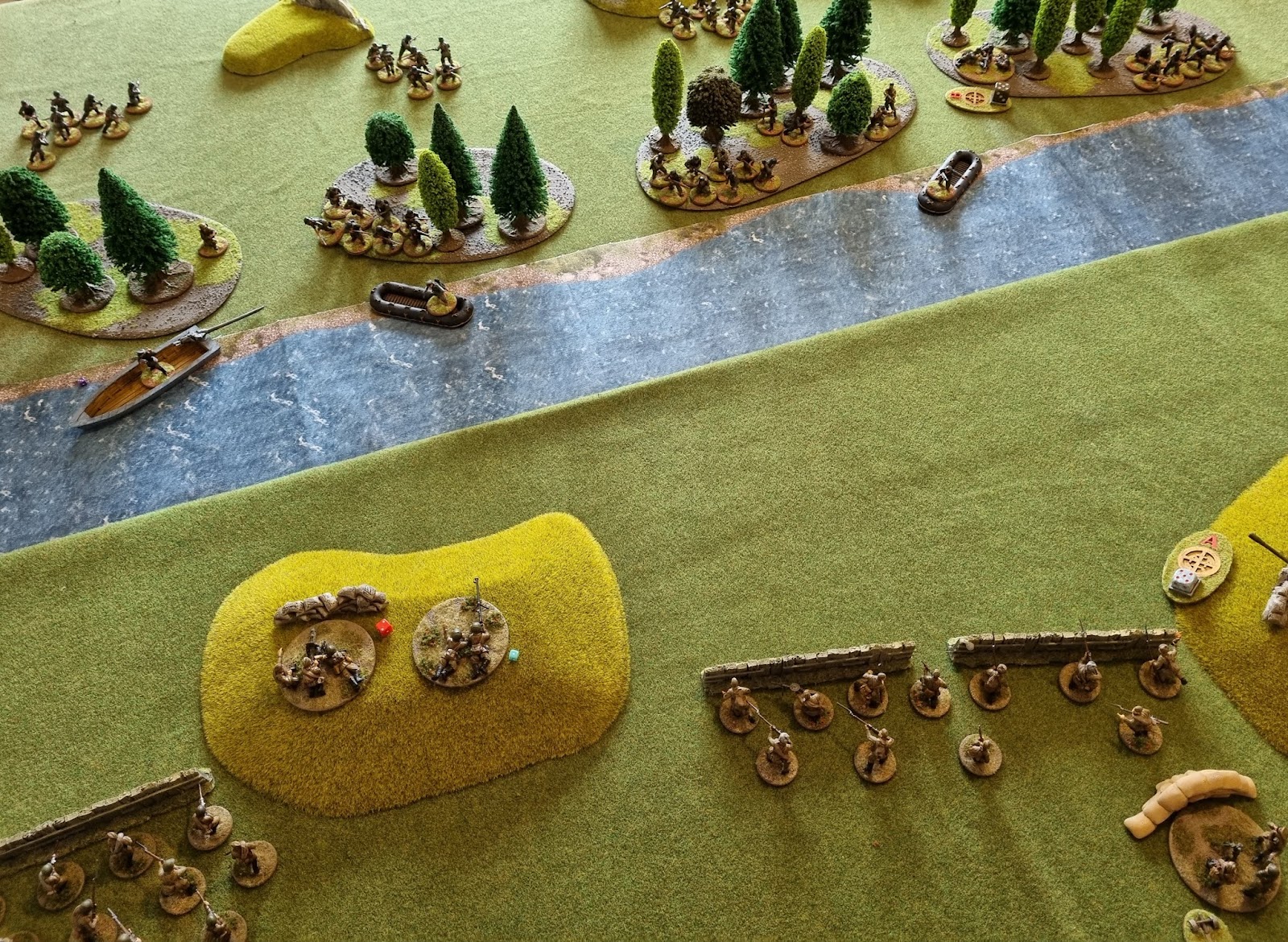 The opening turn saw the bombardment have only a limited effect and it failed to prevent the Soviet AT Rifles sinking two of the worryingly unarmoured Sturmboots (causing us to immediately re-evaluate the scoring system to not count the boats as victory points), whilst the German return fire wasn't able to make an impact against the dug in Russians. 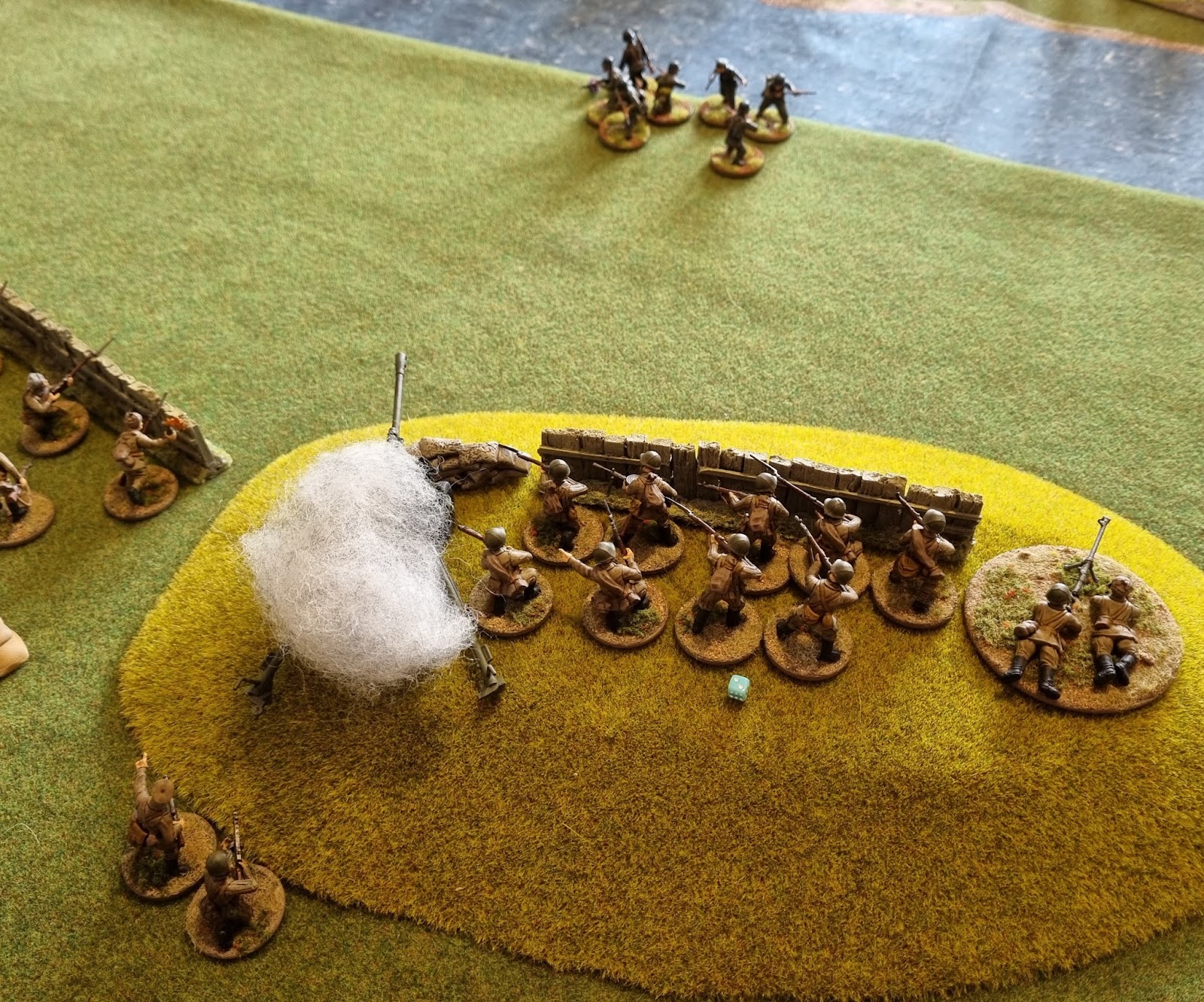 The start of the second turn saw the Germans rush to get at least some boats across the water, but they took fire and stranded their passengers on the exposed river bank.
However, things looked up for the attackers when the ZiS-3 was destroyed by a well aimed mortar shell before it had any impact on the battle. 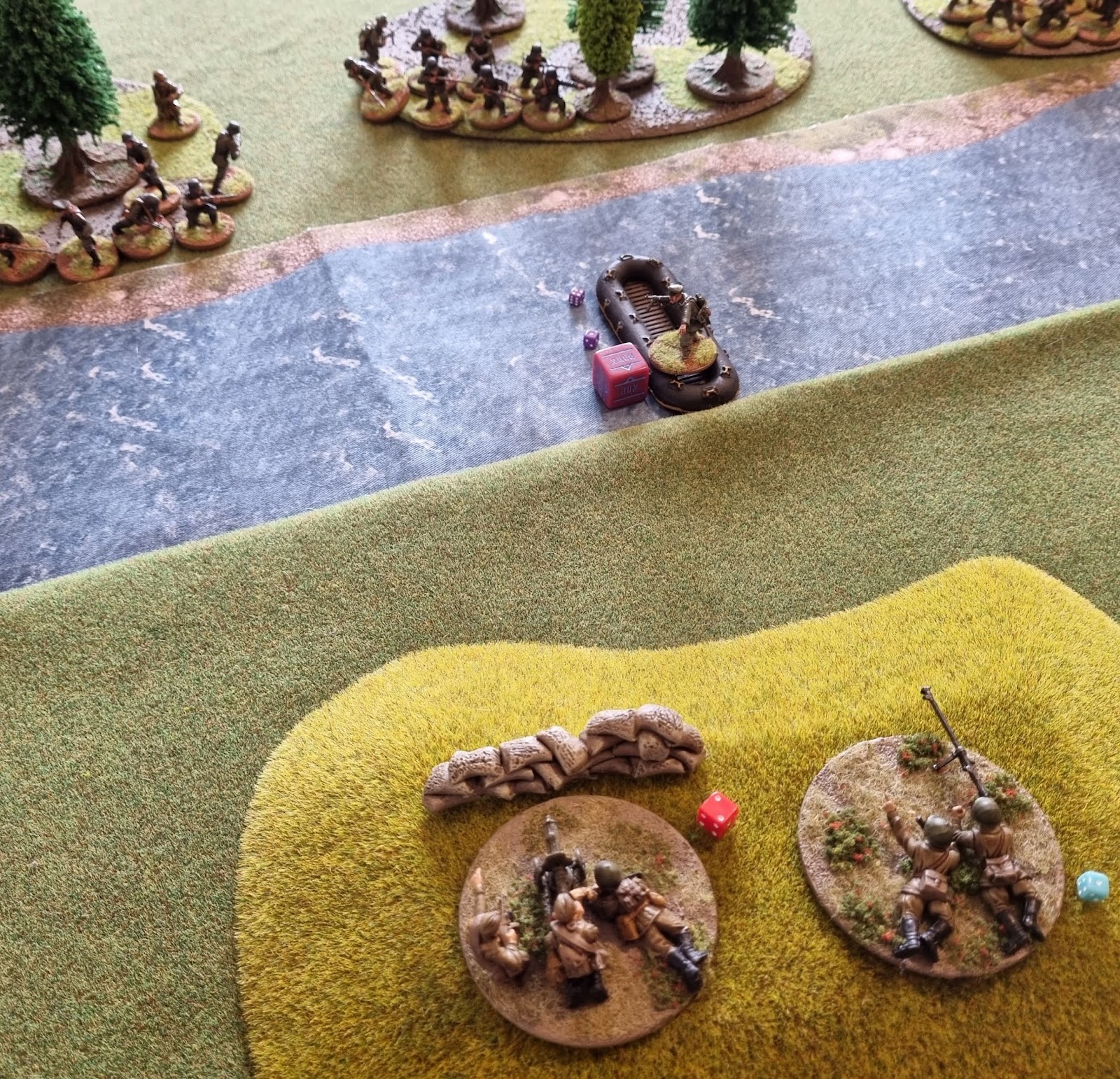 On the southern flank the Soviet MMG Team poured fire on the advancing boat, piling pins on the passengers. Meanwhile the AT Rifle sank the last Sturmboot. 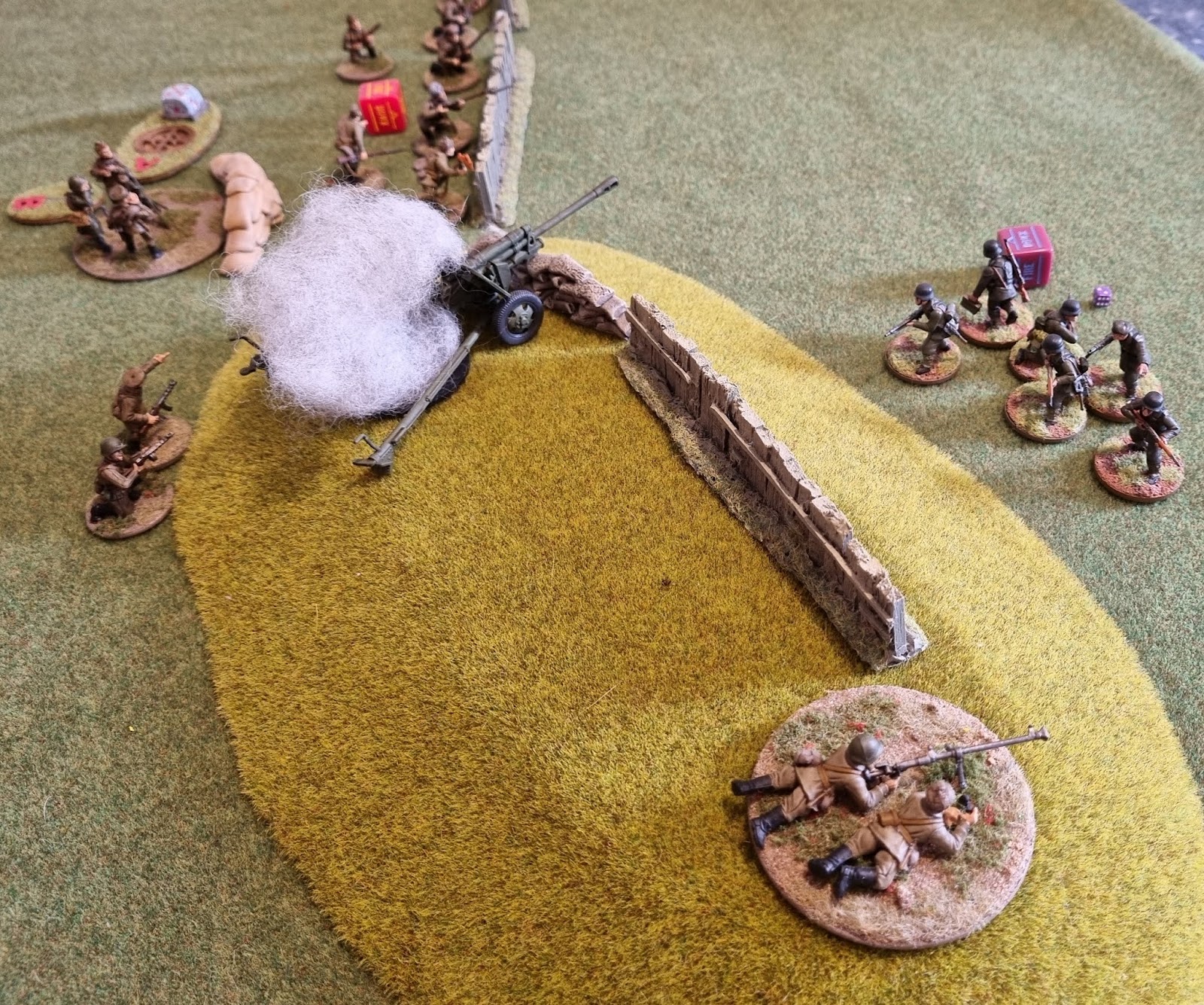 By the third turn, the German assault was struggling from a distinct lack of boats. However, the northernmost squad on the riverbank managed to push onwards and, with support from massed Rifle fire, crippled the Soviet squad on the ridge, who subsequently ran off following a FUBAR. 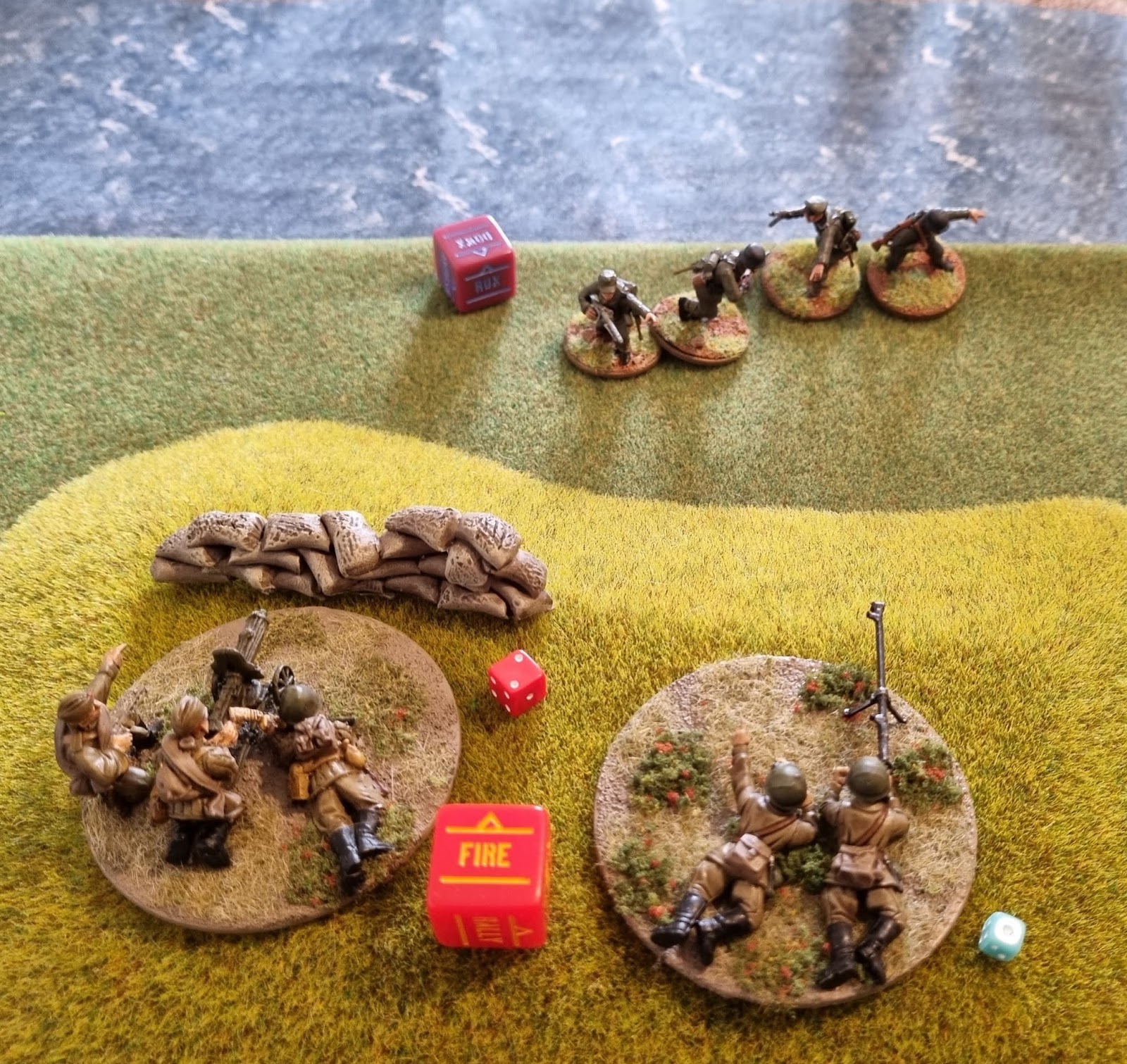 Unfortunately for the Germans the assault on the southern flank had stalled in the face of the most significant MMG I've ever seen in Bolt Action. The remaining Heer infantrymen hugged the river bank in a desperate bid to survive. 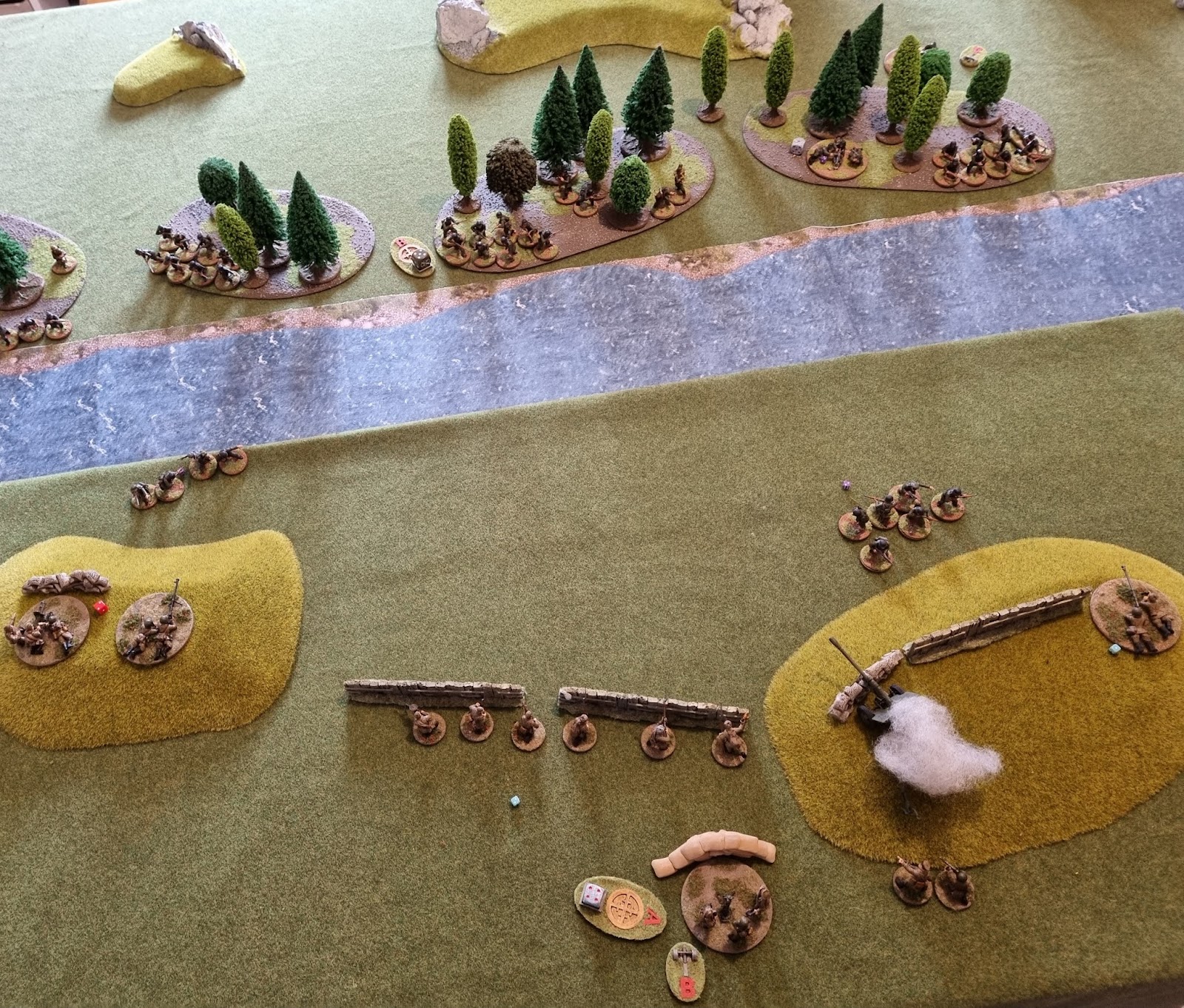 The Germans stranded on the western bank without boats now hurled everything they had at the dug in Soviets. The MMG in particular weathered a massive amount of fire due in no small part to taking a casualty, making it a small team and significantly harder to hit. 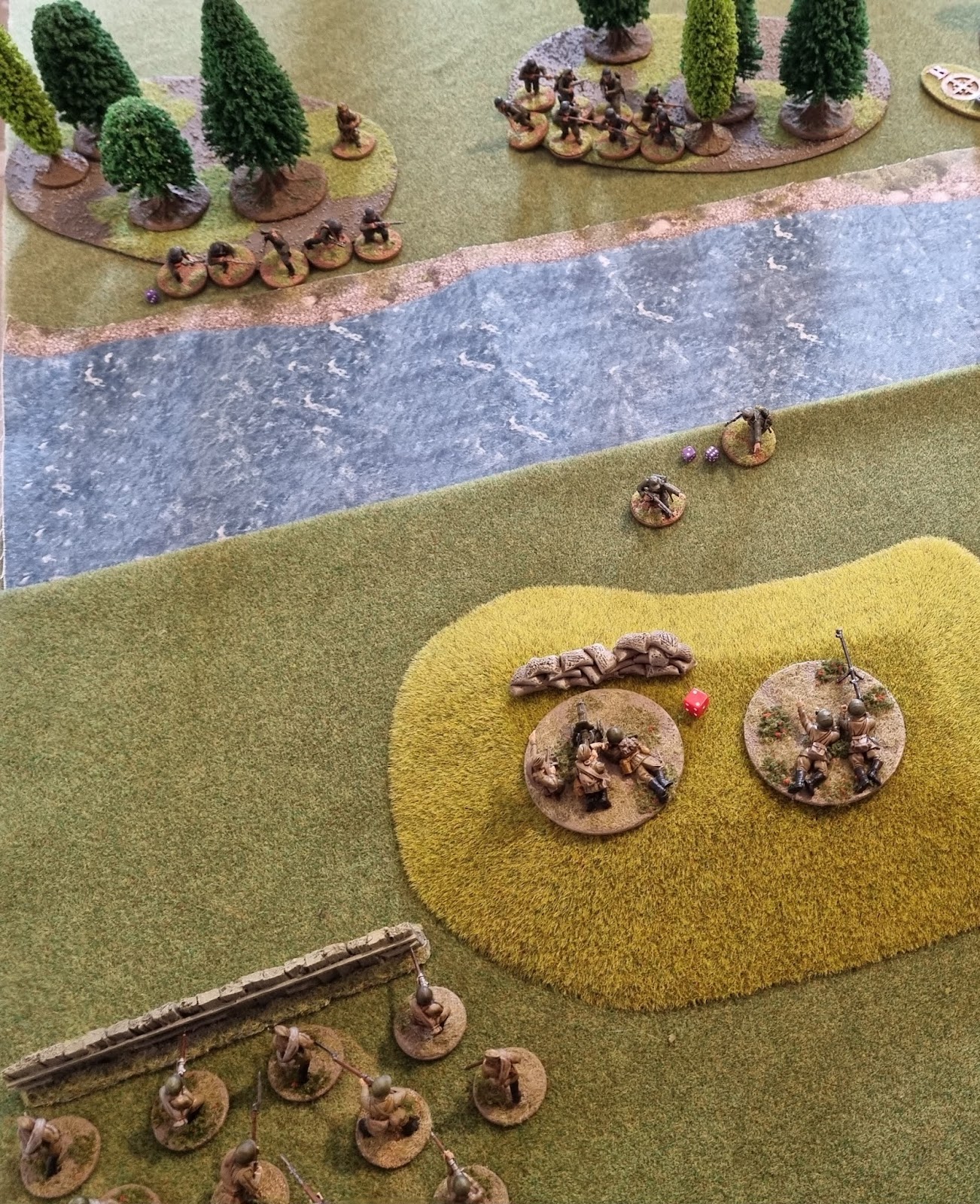 Meanwhile, Soviet fire was poured into the tattered remnants of the two German assault squads. 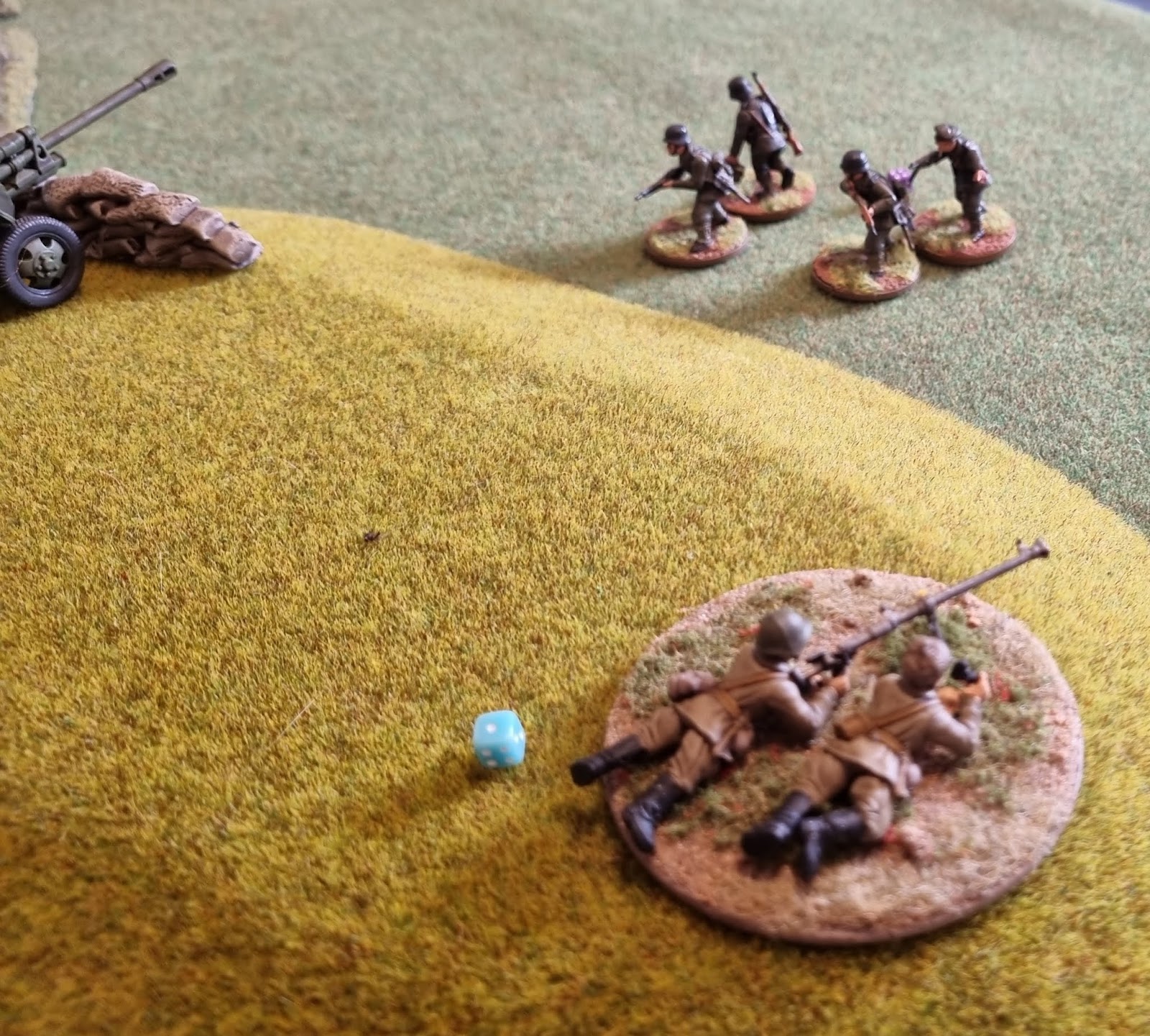 The norther squad were within striking distance of a vulnerable and isolated AT rifle team, but took fire at just the wrong moment, taking enough pins to prevent them making the crucial charge. 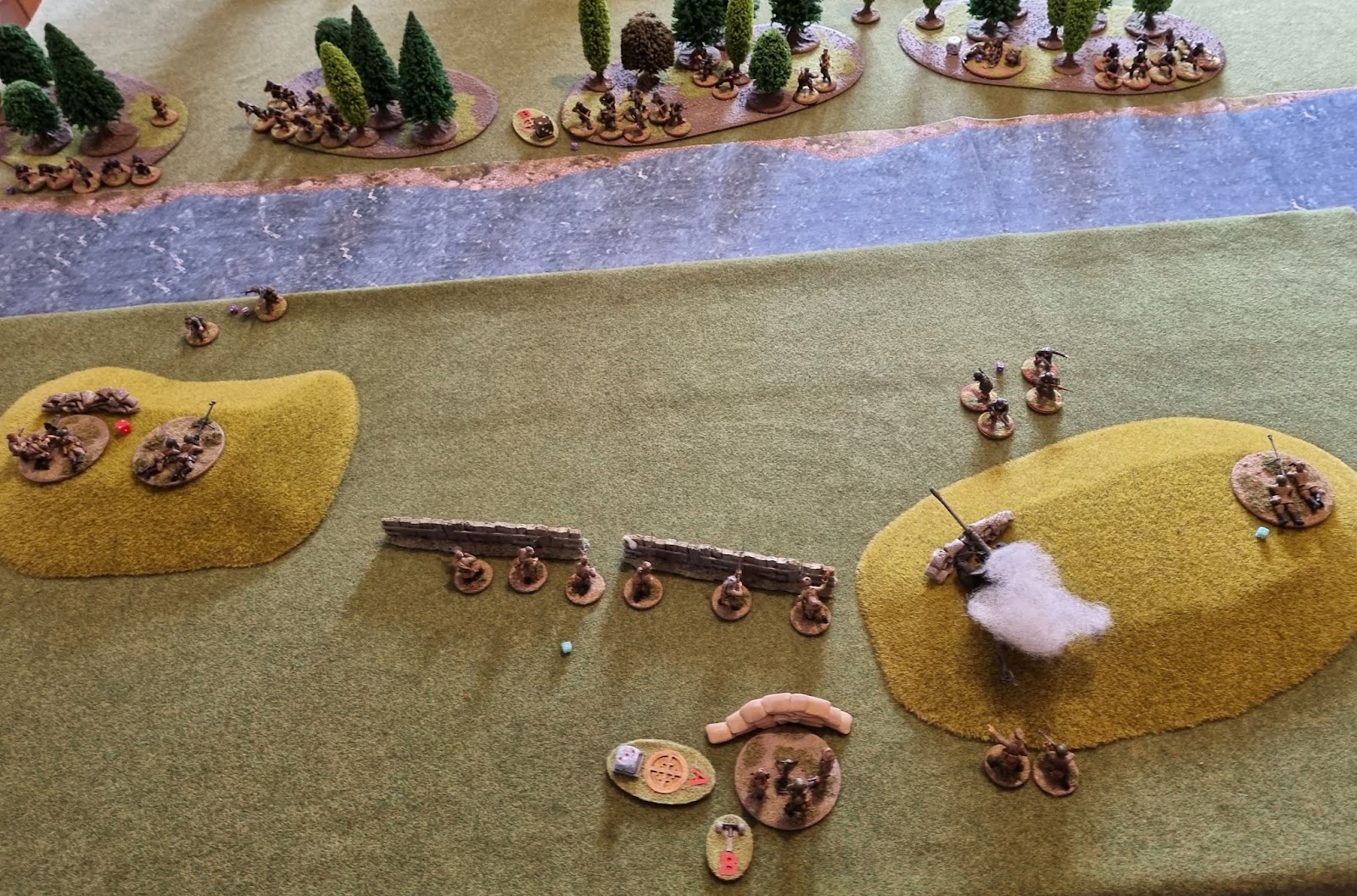 At the tipping point of the battle, both sides concentrated on trying to destroy weaker targets. However, what followed was one of the worst exchanges of fire in wargaming history.
The Soviet mortar managed to hit a German squad, but only wounded one of four targets (needing 2s). The German MMG lit up an AT rifle, but failed to kill either of the crew to force a crucial morale test. The squad on the river bank was whittled down to two men (never killing enough in one go to make them check morale) with one too few pins to force them to break.
The deadlock of ineptitude was finally broken by the German Mortar silencing its Soviet counterpart, and the Sniper taking out an AT rifle team. 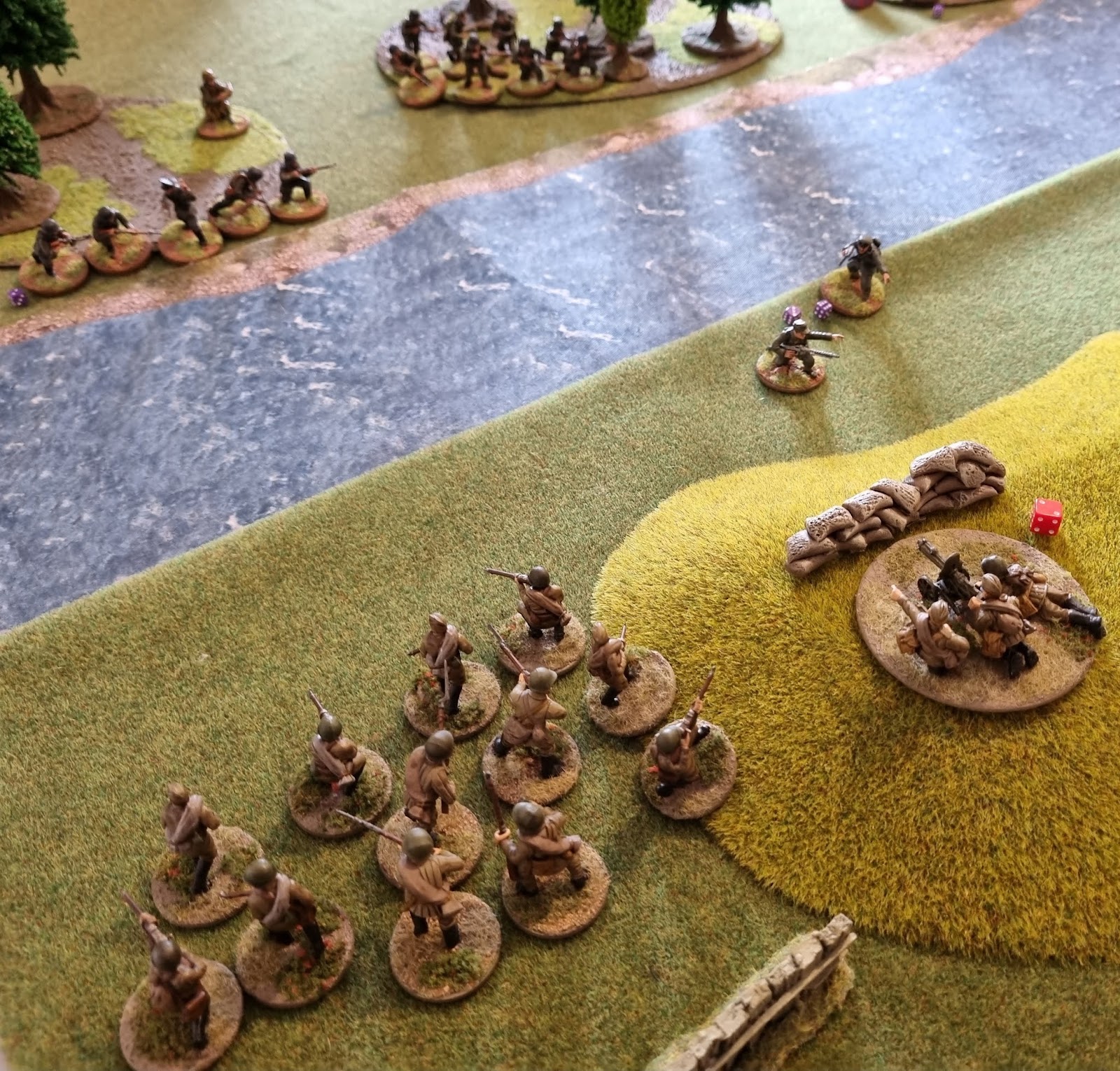 This, somewhat surprisingly after how the battle began, left the score at 6-5 to the Germans, who had two units on the eastern side and four Soviet units destroyed, whilst the Soviets just had five units still active.
With the game potentially ending, the intact Soviet Rifle Squad burst out of its foxhole and sprayed the Germans with fire, needing just a pin to break them...and failed. 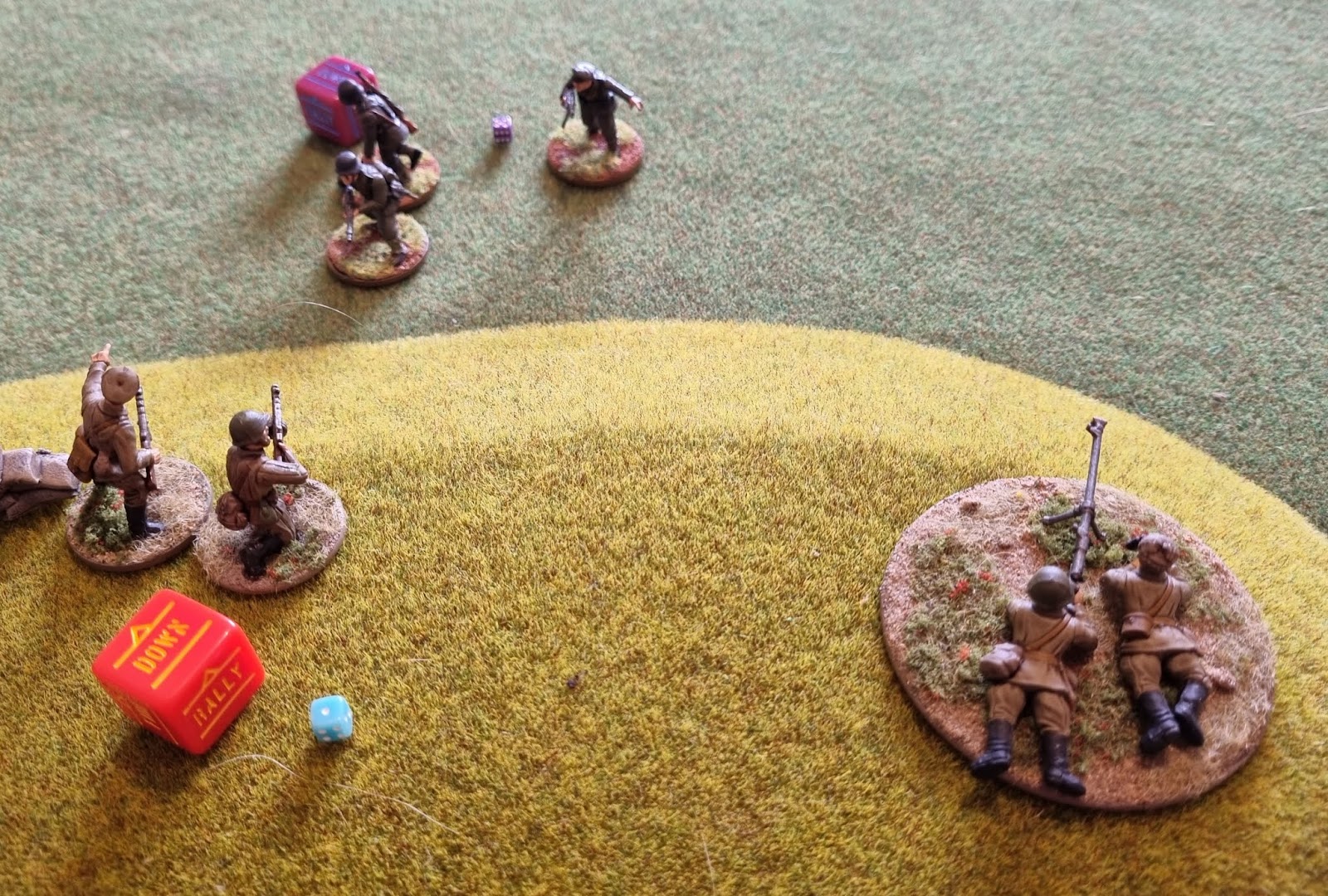 Knowing that the battle could be lost, the Soviet officer tried the same trick, spraying the northern German squad with SMG fire...and failed.
Things looked bleak for Mother Russia until the die to determine if the game would end with a German victory on turn 6 said, "Nyet!" 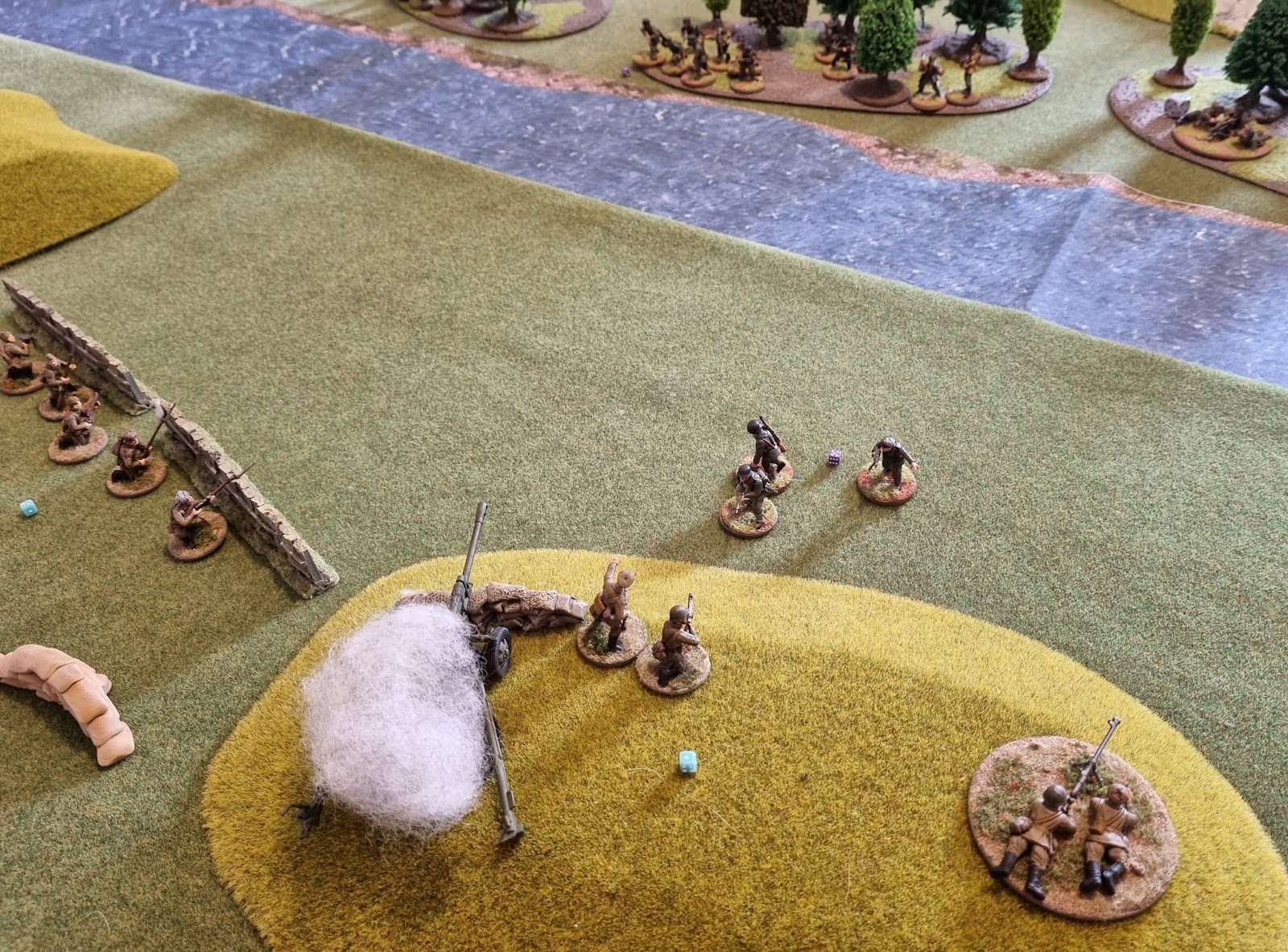 The final turn saw the Germans on the western bank try unsuccessfully to bring down the Soviet commander, who opted to go down and live, rather than retain the chance of assaulting the stricken unit in front of him. 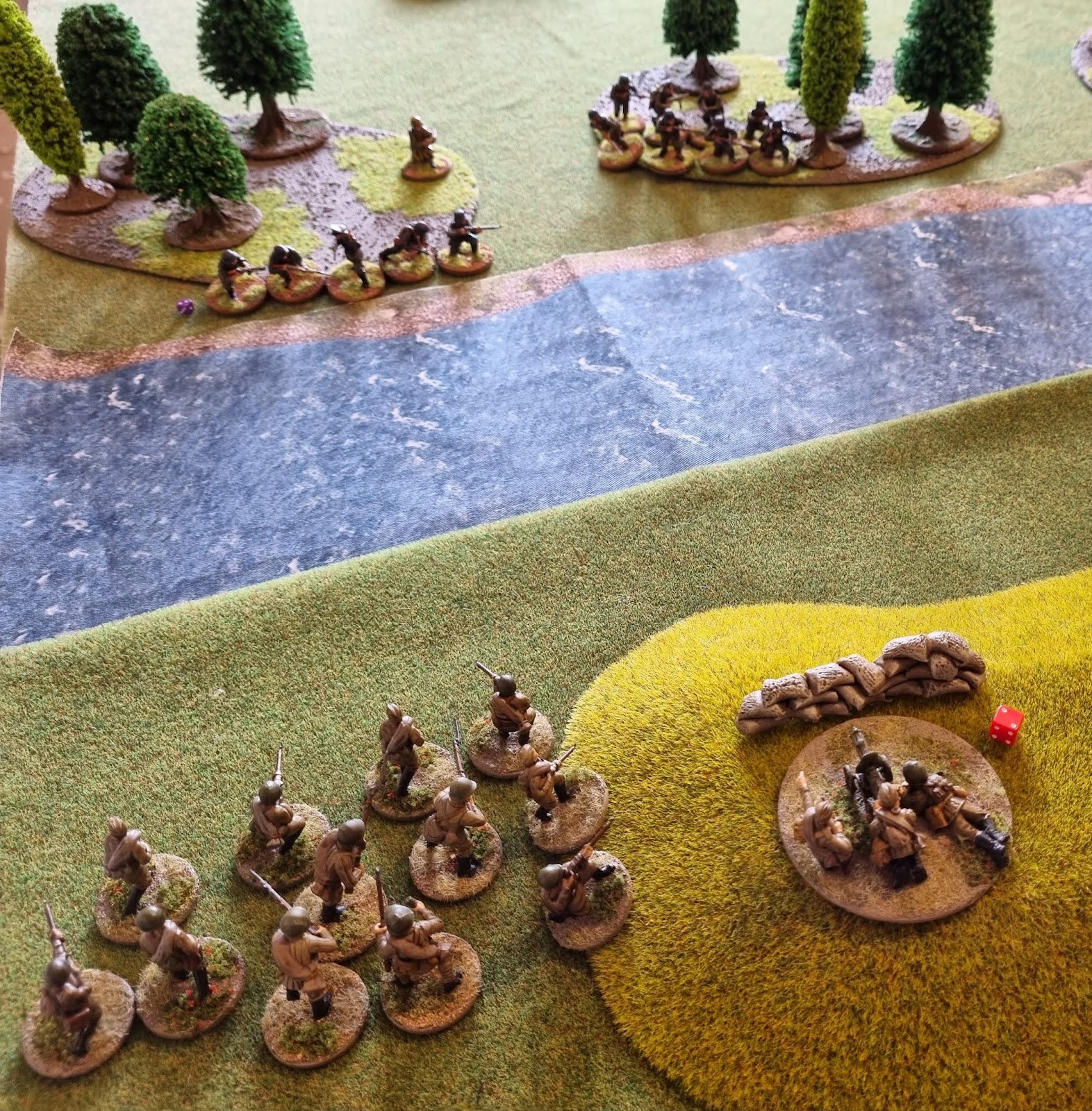 However, on the southern flank, the MMG once again proved its worth, scoring the necessary pin to force the squad on the river bank to melt away and try to swin to safety.
This left the final score as Soviets 6 (1 unit destroyed, 5 on the eastern bank) to the Germans 5 (4 units destroyed, 1 on the eastern bank). Had we kept the boats as scoring units, it would have been 11-5 and not a contest.
It was a tense affair at the but the scenario itself seems heavily dependent on how many boats survive the first round, even with our change to the scoring. One more squad across the river could have made a massive difference.
Were we to play this again, I suspect I'd be trying to stop several more of them, but with smaller units of regulars, as orders tests were often my biggest challenge.
We now move to the outskirts of Stalingrad proper and an attempt to defend the Tractor Factory. There's another river to cross, but this time there are bridges and we're both trying to cross them.
In other news, I managed to palm off the French Line Infantry from Wargames Illustrated off on to Pete, so it was a double victory.
Acquired: 105
Painted: 122
Posted by Kieron at 10:59