After time spent time raiding Farmer Maggot's crop of mushrooms, the Quest of the Ringbearer now begins in earnest, with Frodo, Sam and Pippin trying to cross the Shire whilst being hunted by Black Riders. 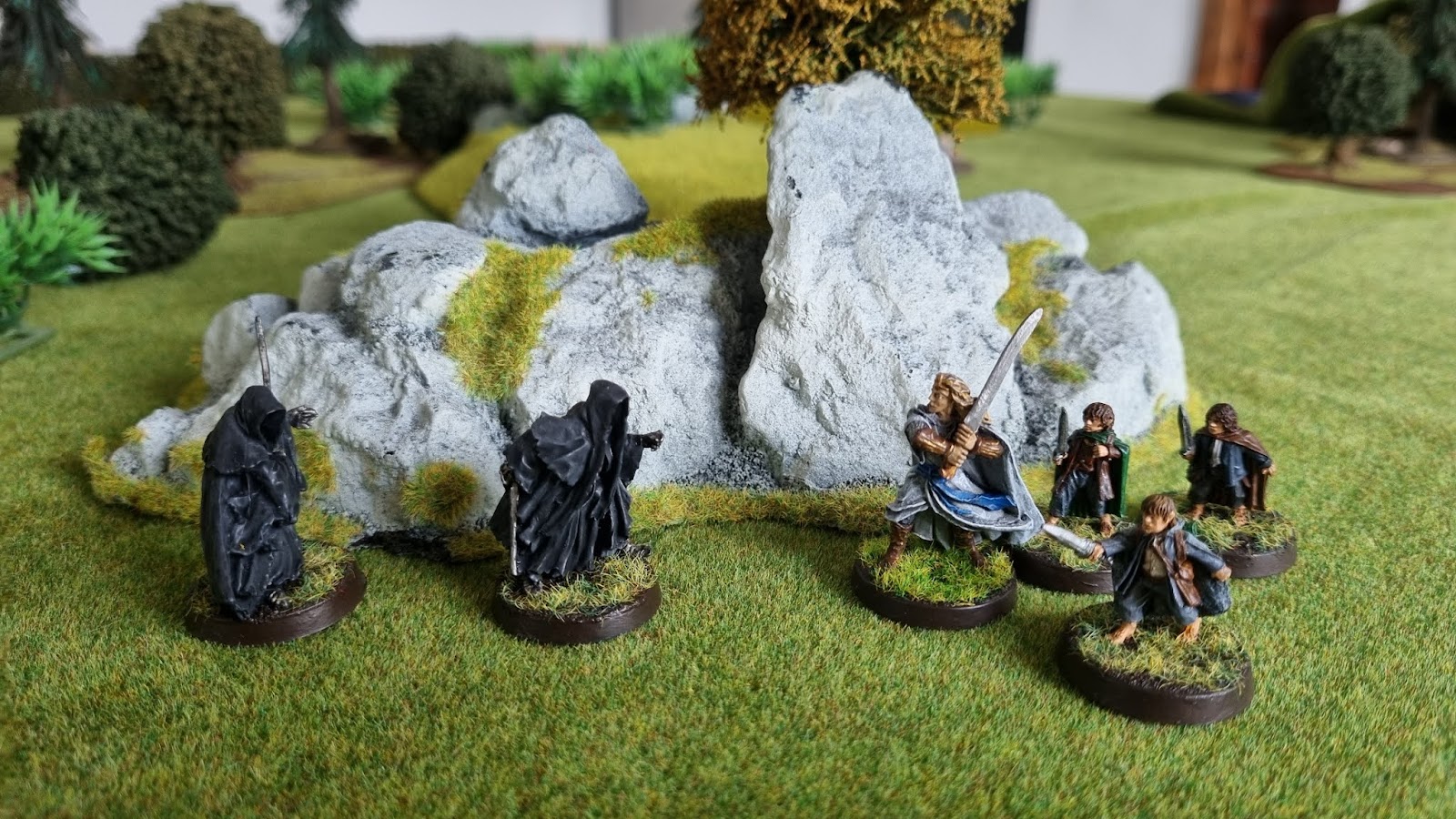 Short Cuts Make Long Delays is the second scenario in the campaign and is based on two early chapters from The Fellowship of the Ring novel, rather than the movie.
The hobbits, having left Bag End not a moment too soon, need to make their way across the table before the three Ringwraiths can track them down and kill Frodo. 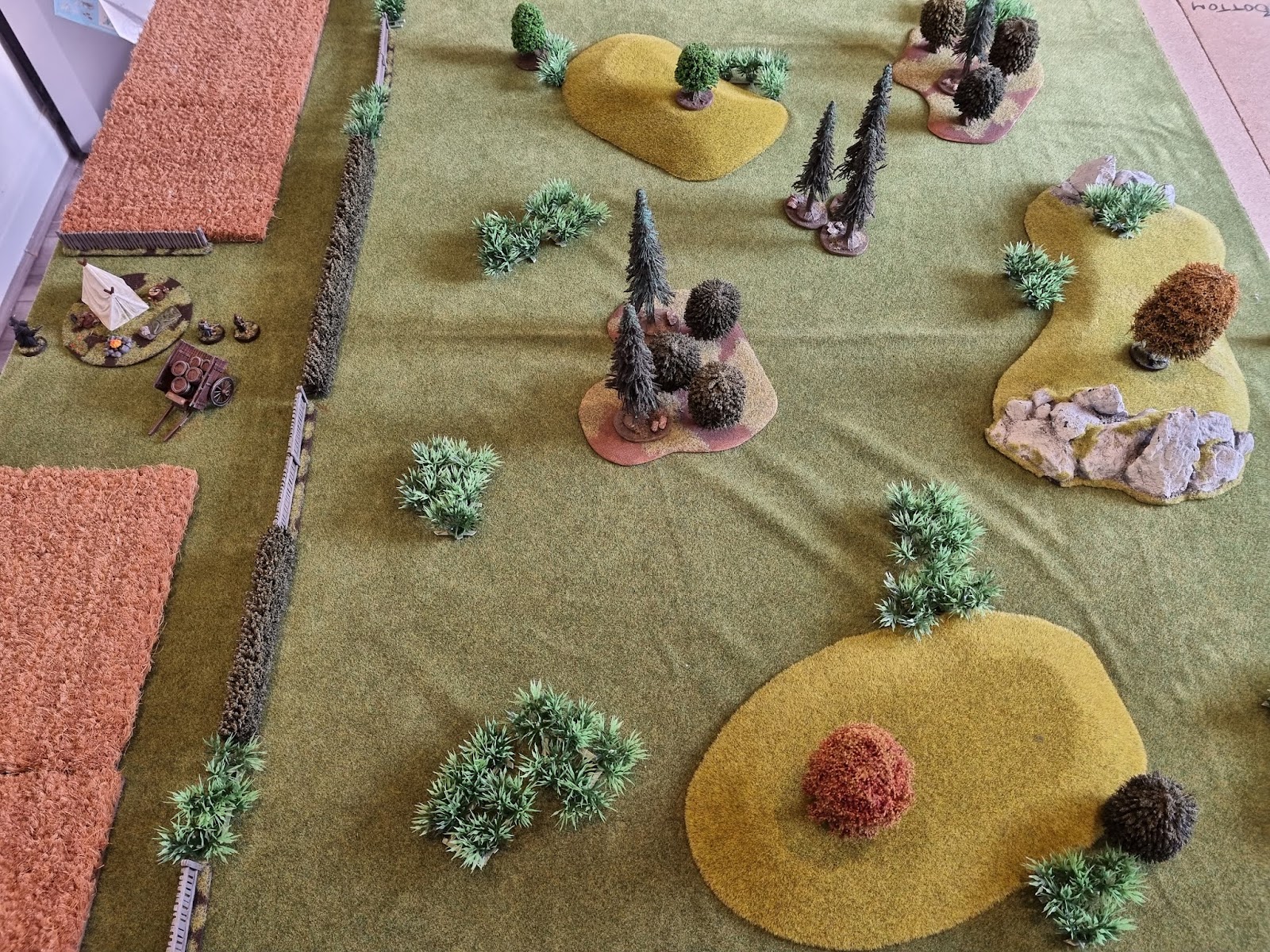 Fortunately, the Ringwraiths act as sentries (with some randomised movement) until the alarm is raised, but until that time, there is a chance that the hobbits will panic and go the wrong way if they fail a courage check at the start of their move. 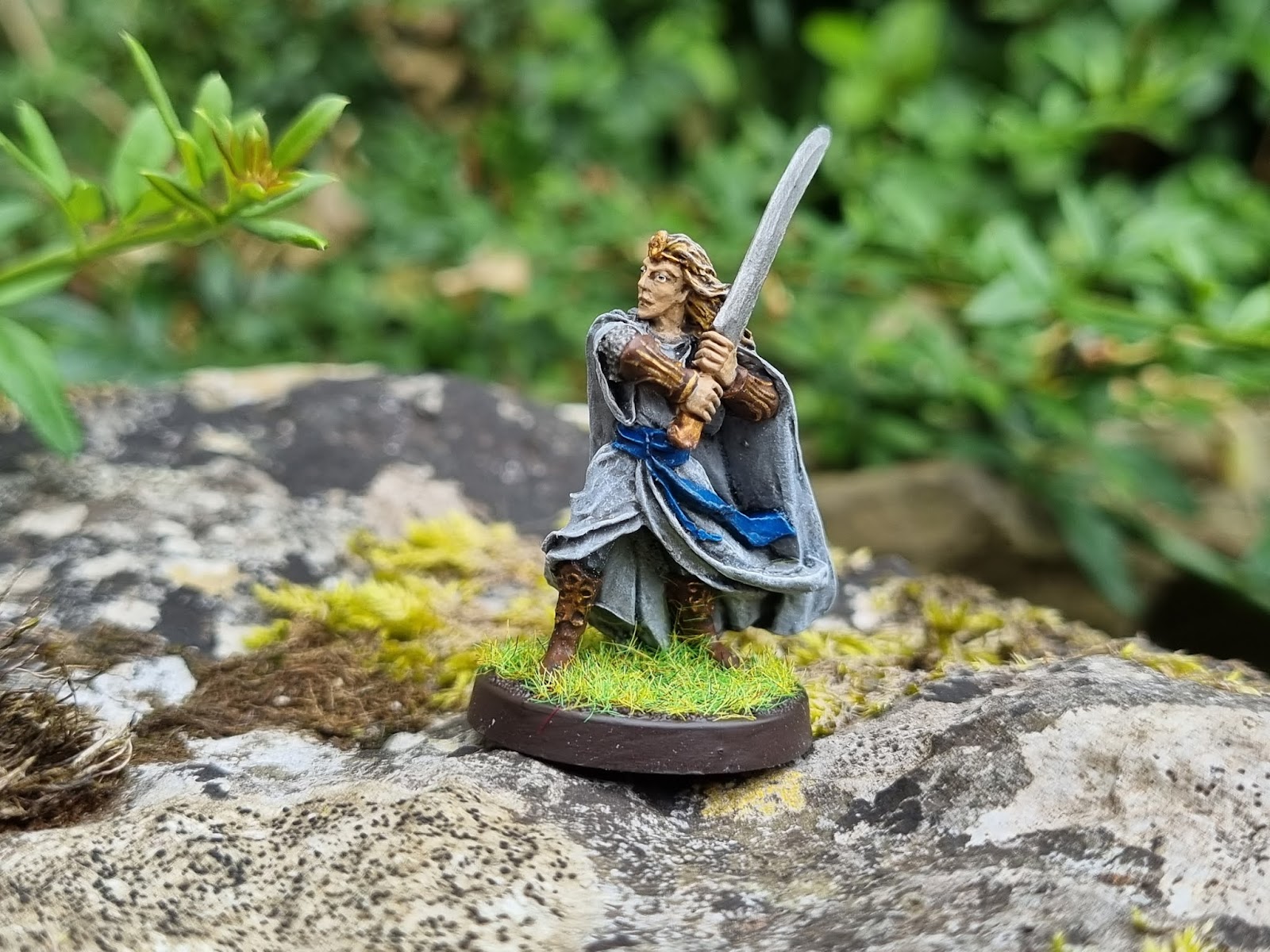 The hobbits will be aided in their escape by Gildor Inglorion, who I bought and painted specifically for this scenario. I kept the colours simple for the sake of speed and because the movie elves don't really go in for lots of colour.
Knowledgeable readers may at this point observe that the model I have painted is actually not Gildor, but Glorfindel. I know this, but Glorfindel was significantly cheaper on eBay. 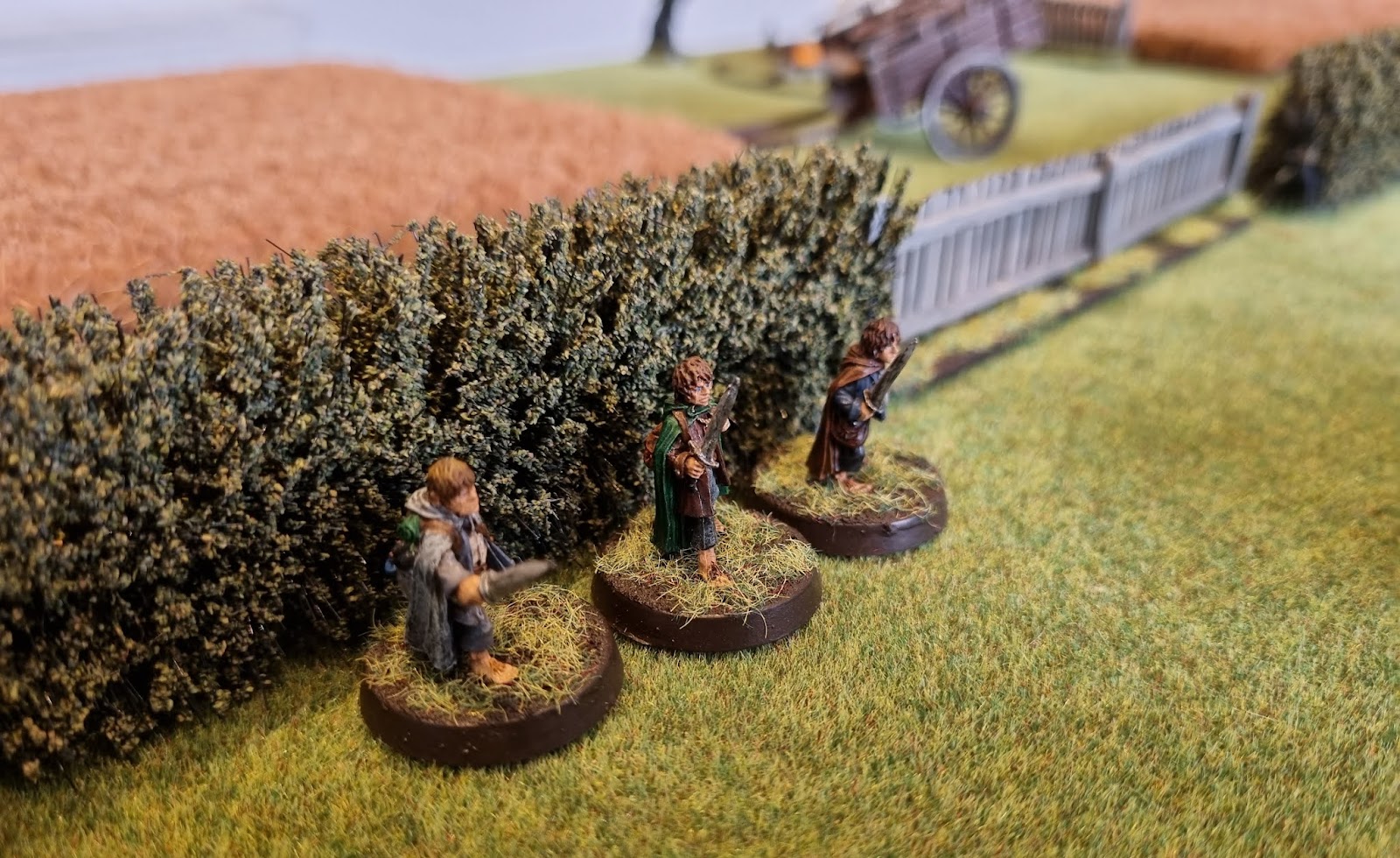 The hobbits started with the hedge line to their back - it should be pointed out that as the hobbits, who were the 'evil' side, won the last scenario, they should have started on the other side of the fence.
It's a minor point that I don't think would have had an effect on what followed. Matt, who was playing as the Ringwraiths, says I'm a dirty cheat. 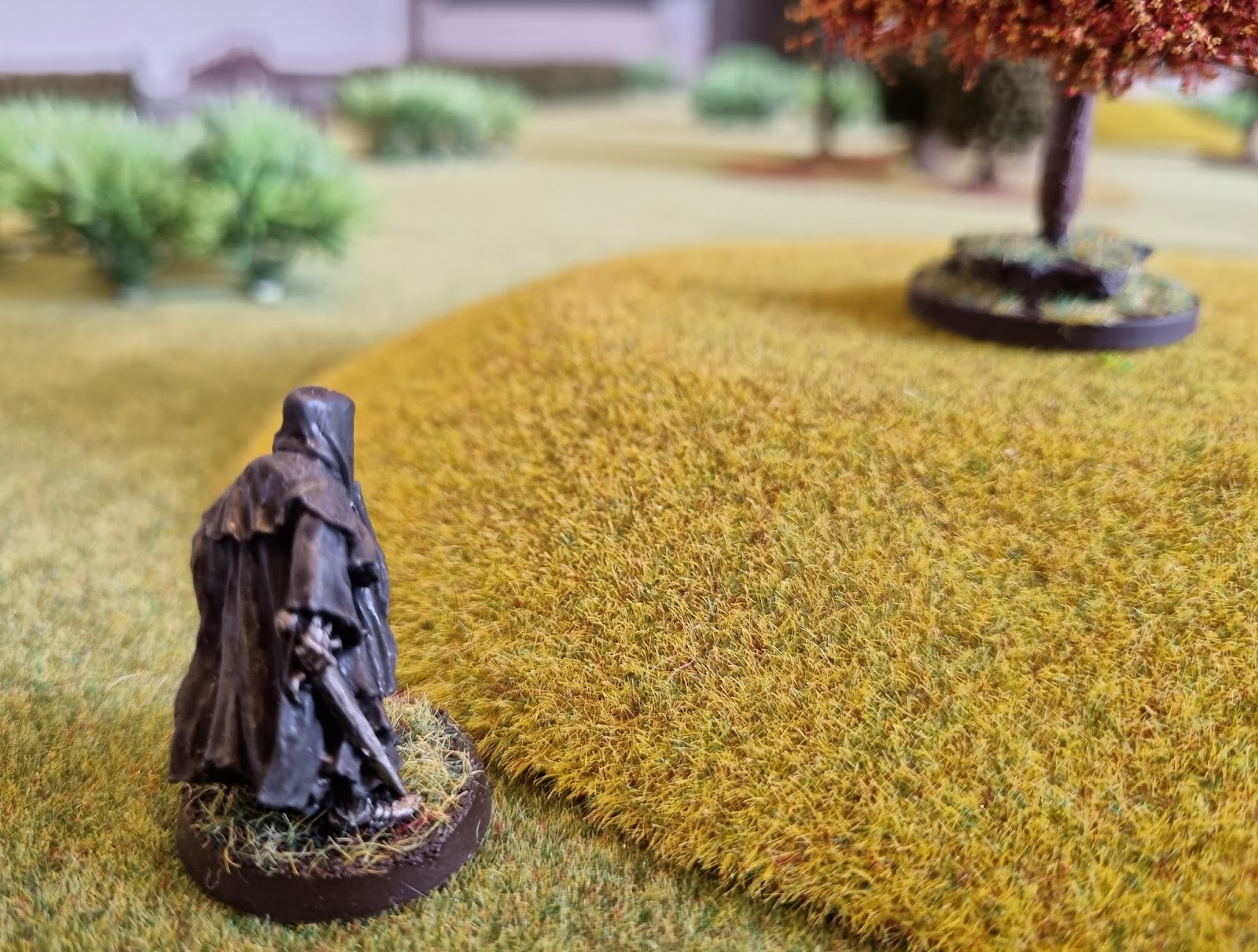 Ringwraiths lurked in the countryside behind the hobbits and on either side of them, snuffling about in the undergrowth and drawn to the power of the Ring. 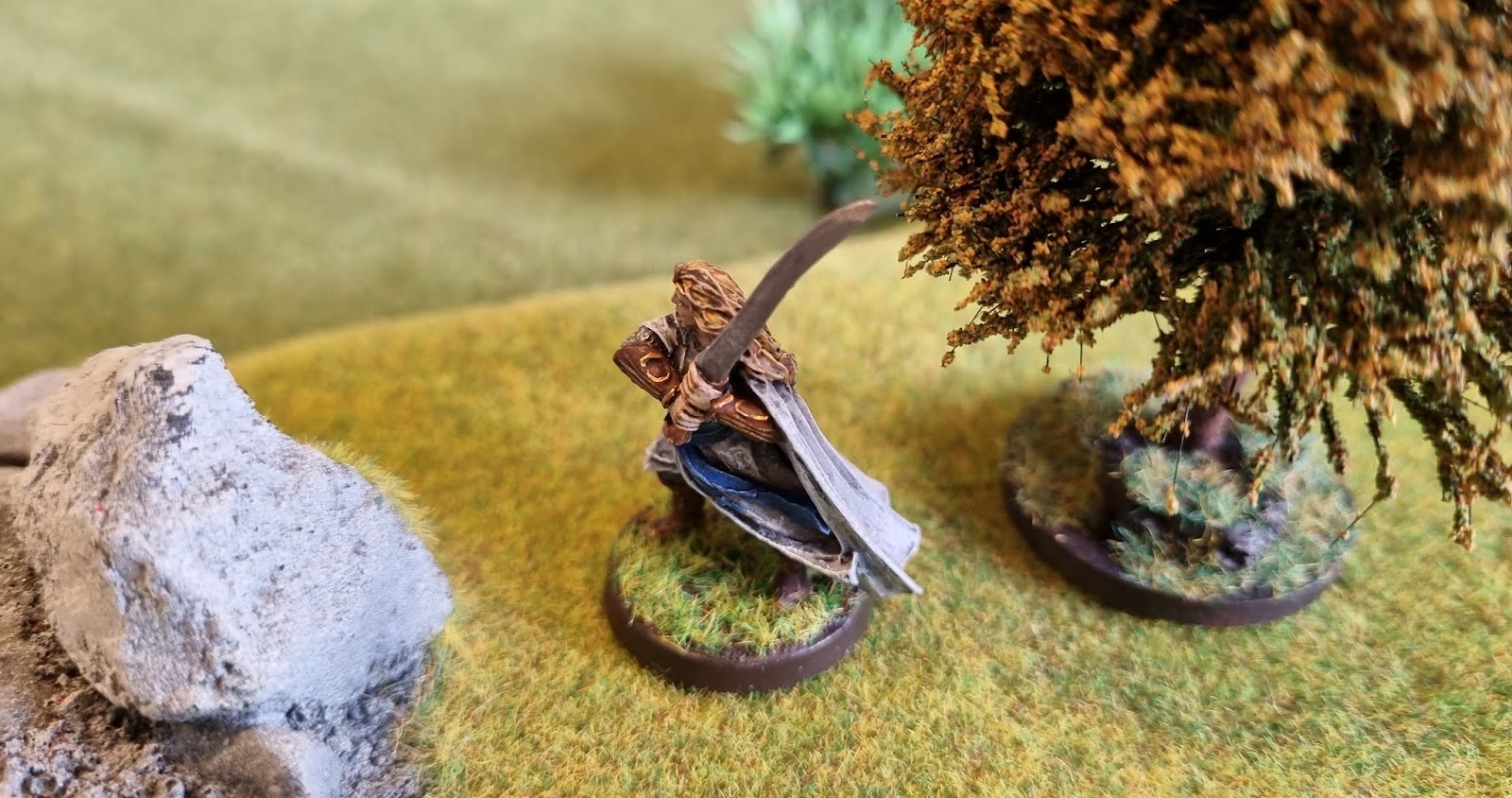 Sensing an evil presence abroad, Gildor Inglorion made his way swiftly (8" movement is somewhat nippy on a 4'x4' board) to where he believed the hobbits to be. 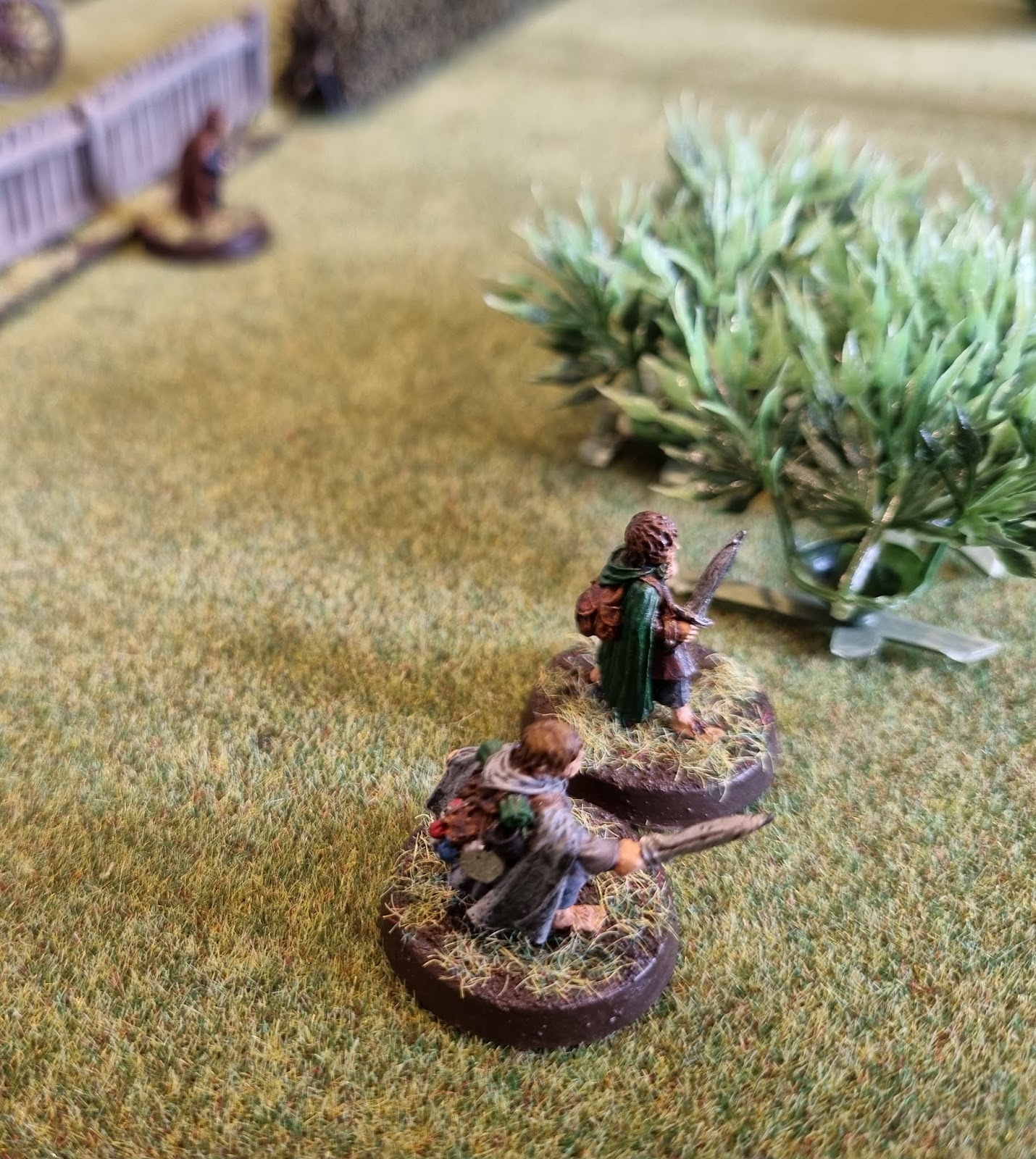 That fool of a Took, Pippin, failed his first courage test and wandered away from Frodo and Sam, but was fortunate that no Ringwraiths were close enough to spot him. 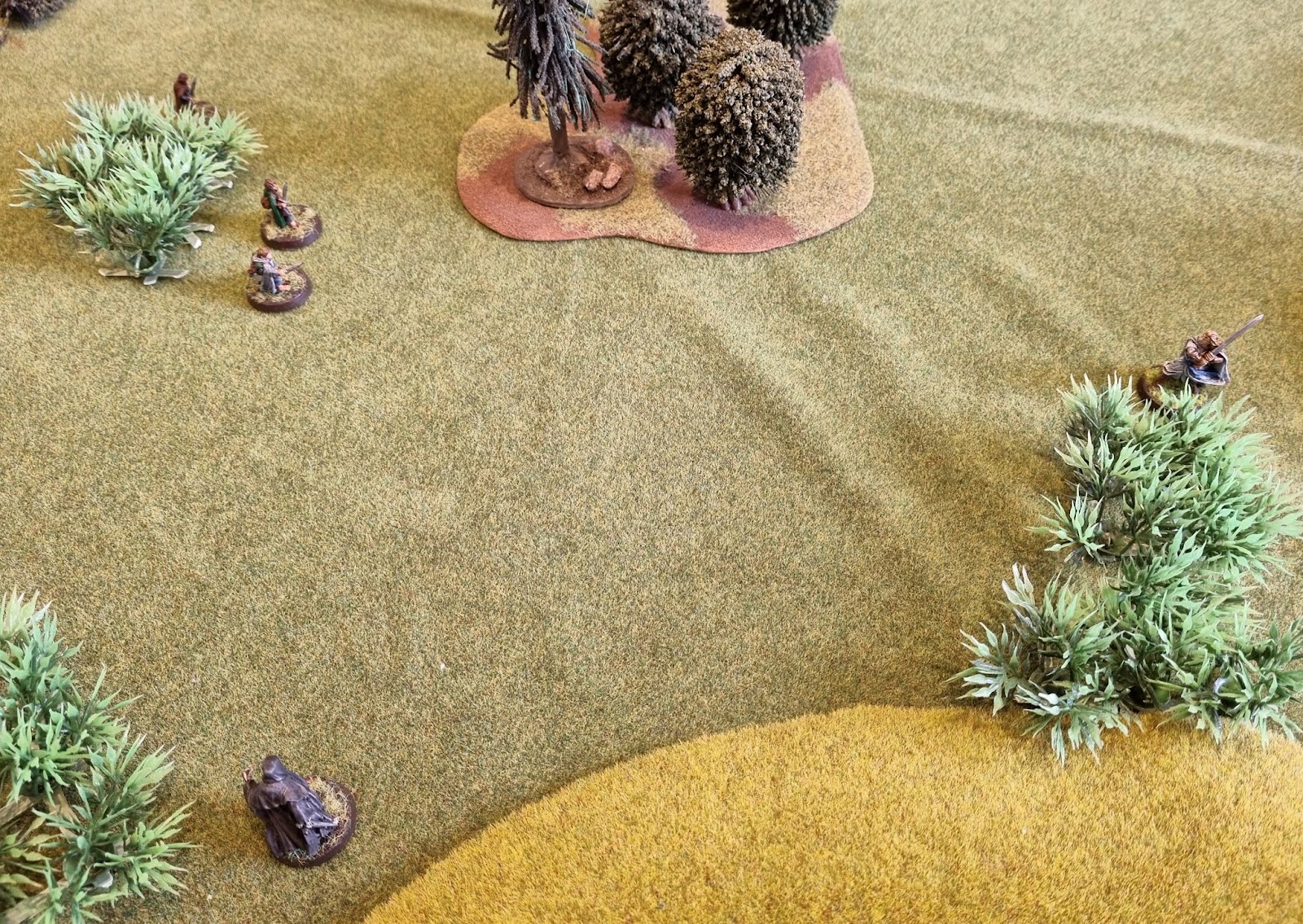 Gildo was still a turn or two away and following a natural 6 for the Ringwraith (allowing it to take its full move), a single failed courage check from the hobbits would raise the alarm. 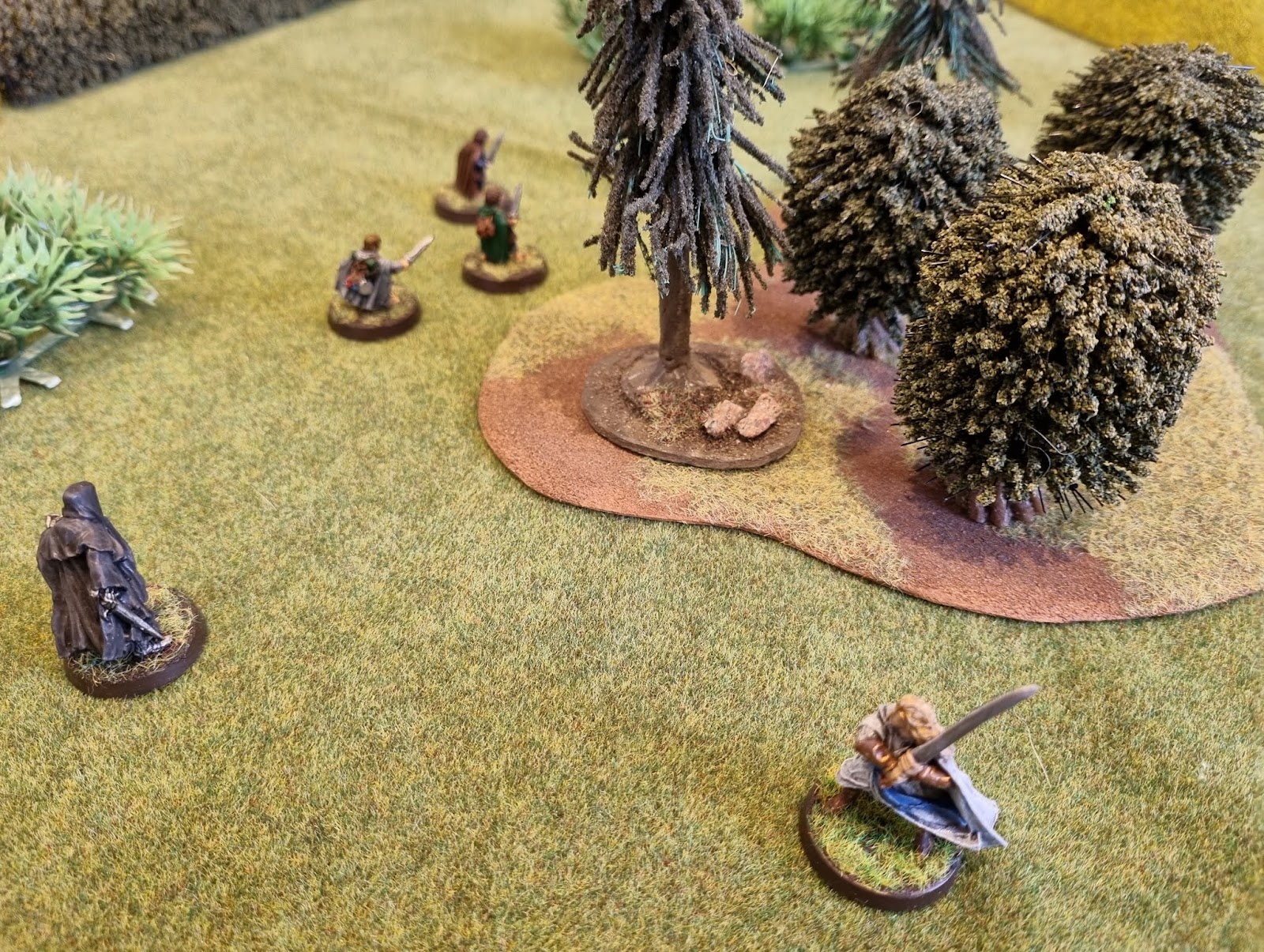 The hobbits kept their nerve (although it cost Frodo a point of Might) and narrowly scurried away from the Ringwraith just in time as Gildor arrived on the scene. 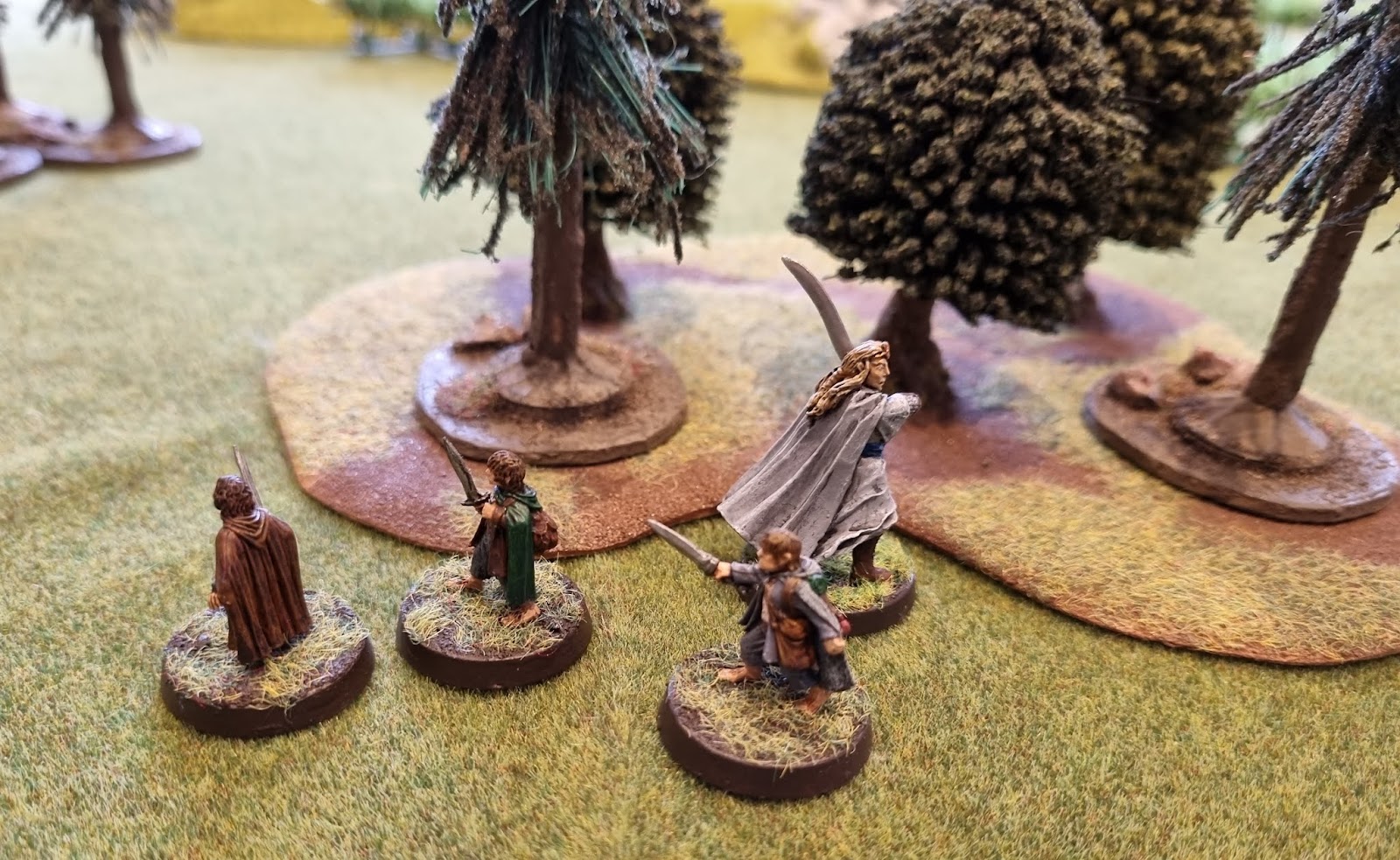 Deciding against leaping in to attack and raising the alarm, Gildor opted to shepherd the hobbits instead. Guarding them as they made their way slowly through the landscape. 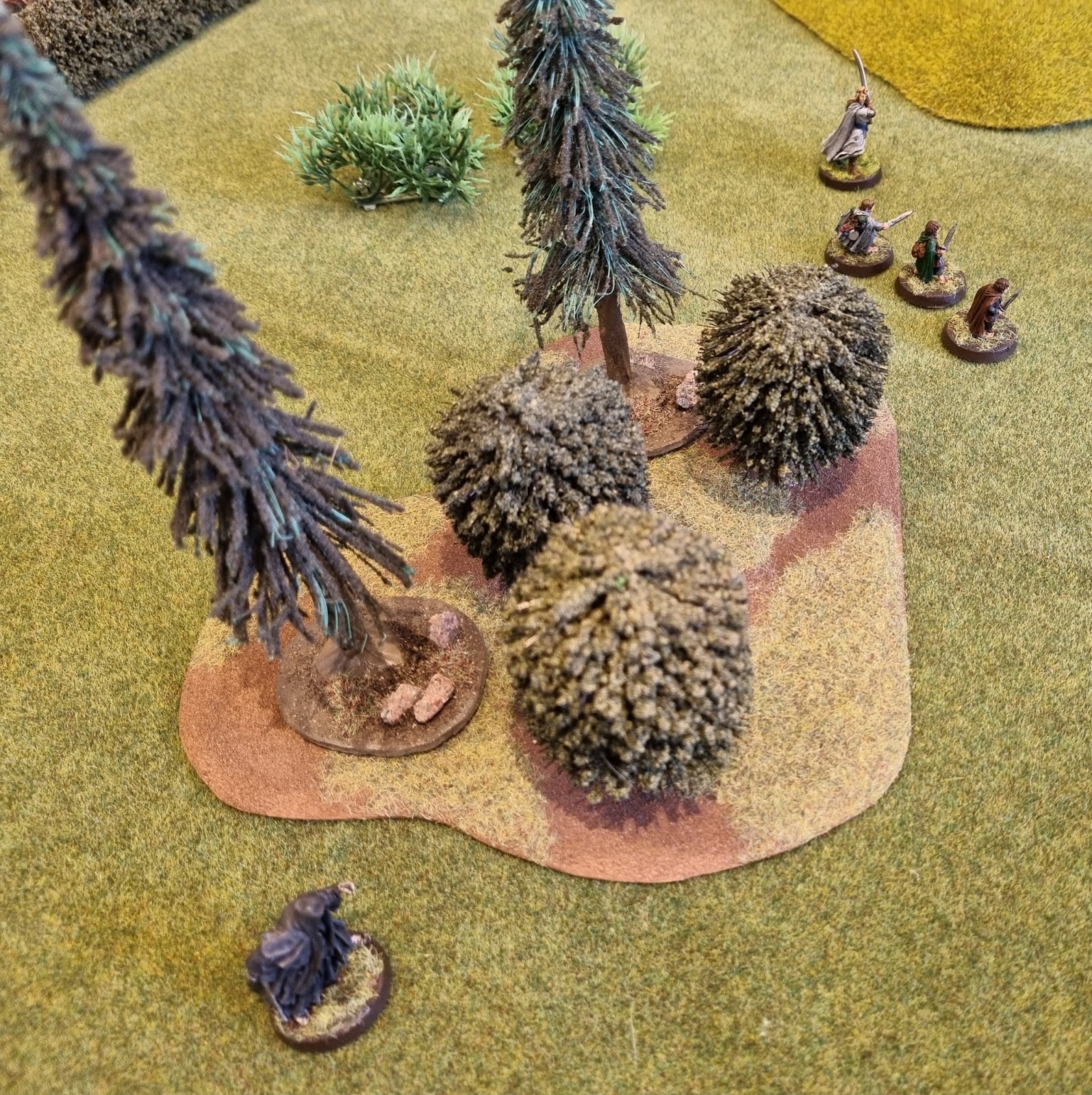 Gildor gave them a little bit of impetus by calling a Heroic March to get the little legs of the hobbits moving and increase the gap between the party and their pursuers. 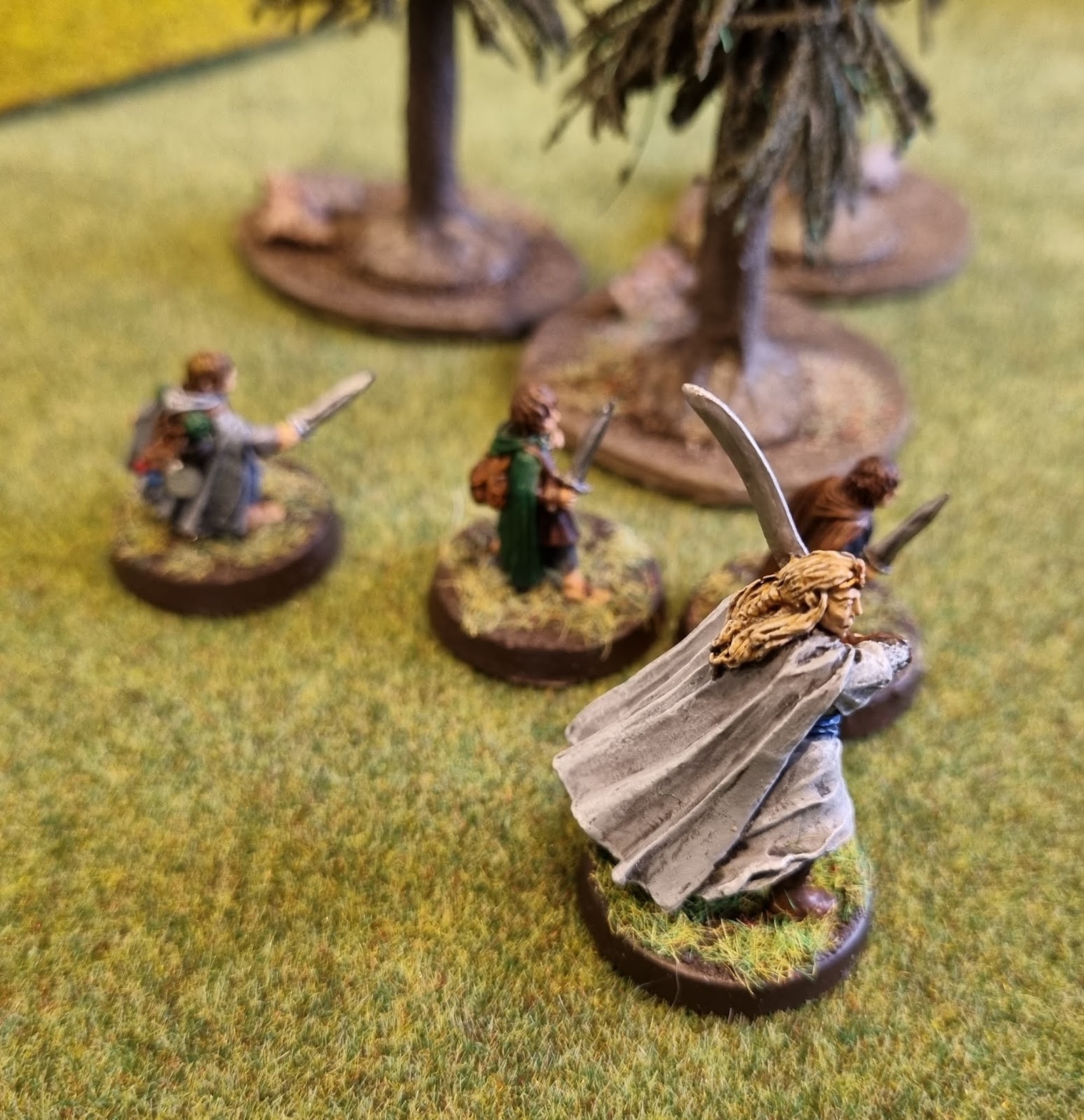 Progress was steady as not only did the hobbits keep passing their courage checks (although Frodo again needed to use his final point of Might), but none of the Ringwaiths could string together a series of positive sentry rolls to get close enough to the party to spot them. 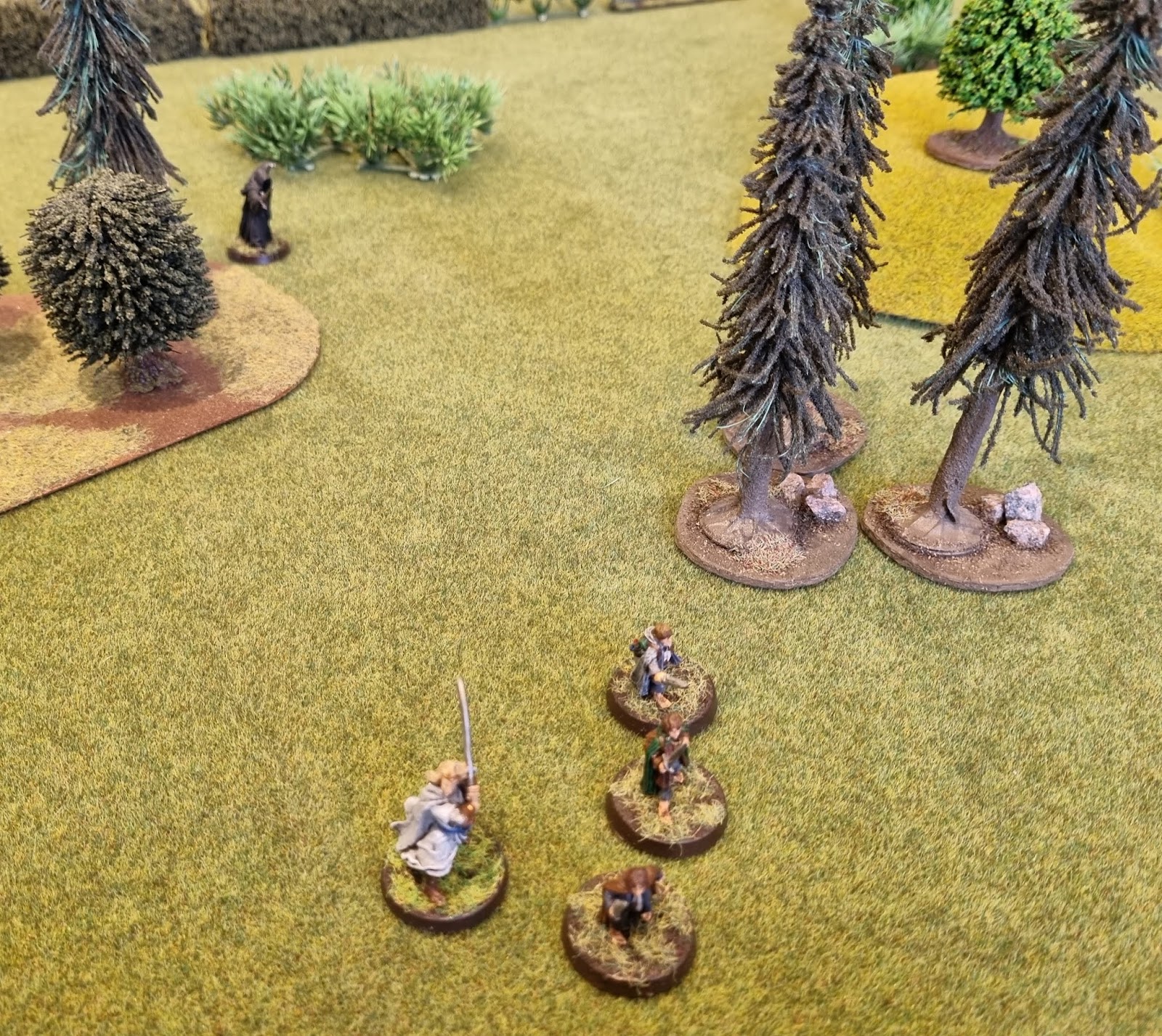 It soon became apparent that barring a really unlikely series of rolls, the Ringwraiths were running out of chances to stop the hobbits as even their Harbinger of Evil rule (reducing the courage of enemies within 12") stopped having an effect. 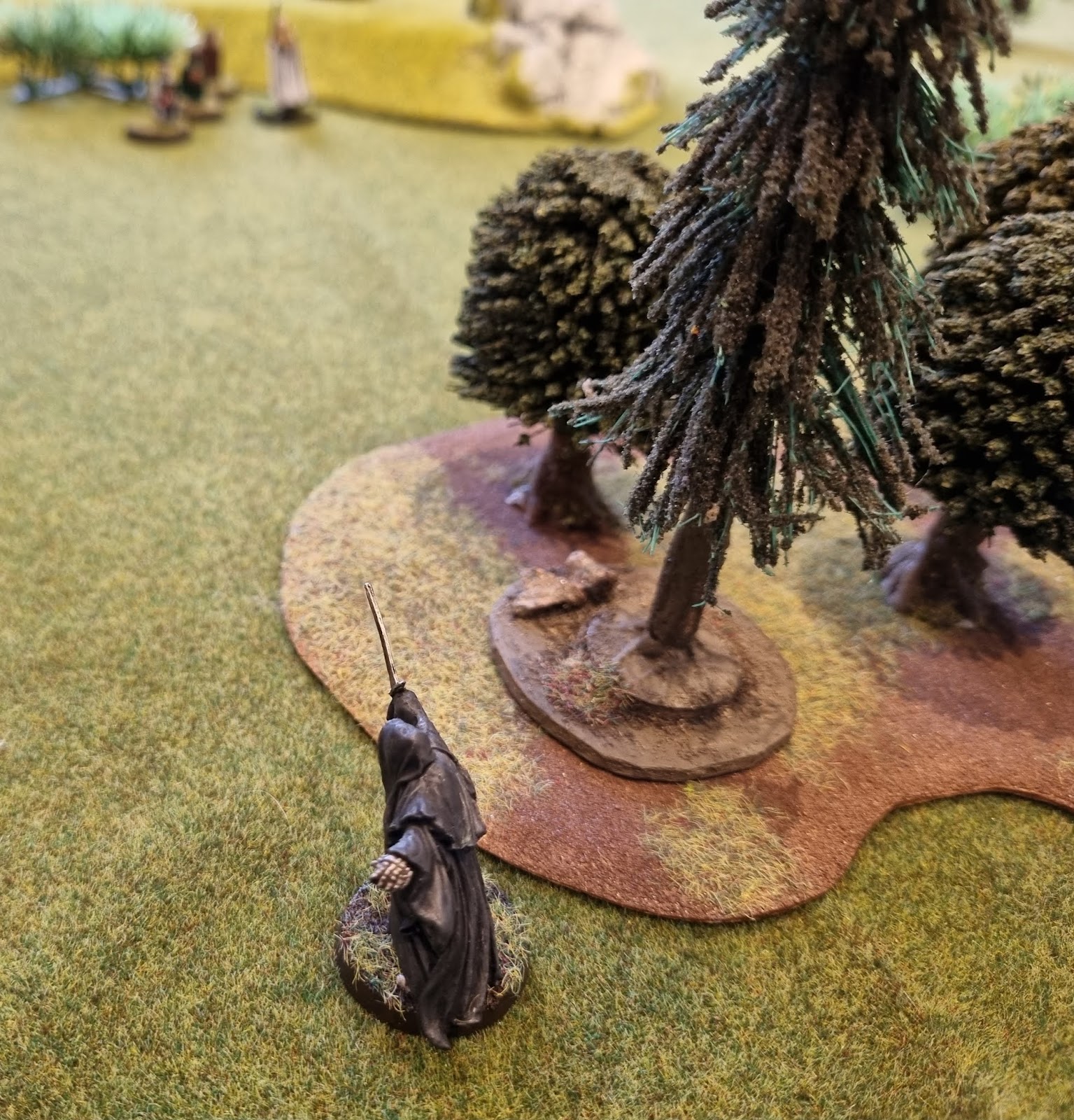 The Ringwraiths continued to stumble around aimlessly and the will of their Dark Lord (Matt) was frustrated. 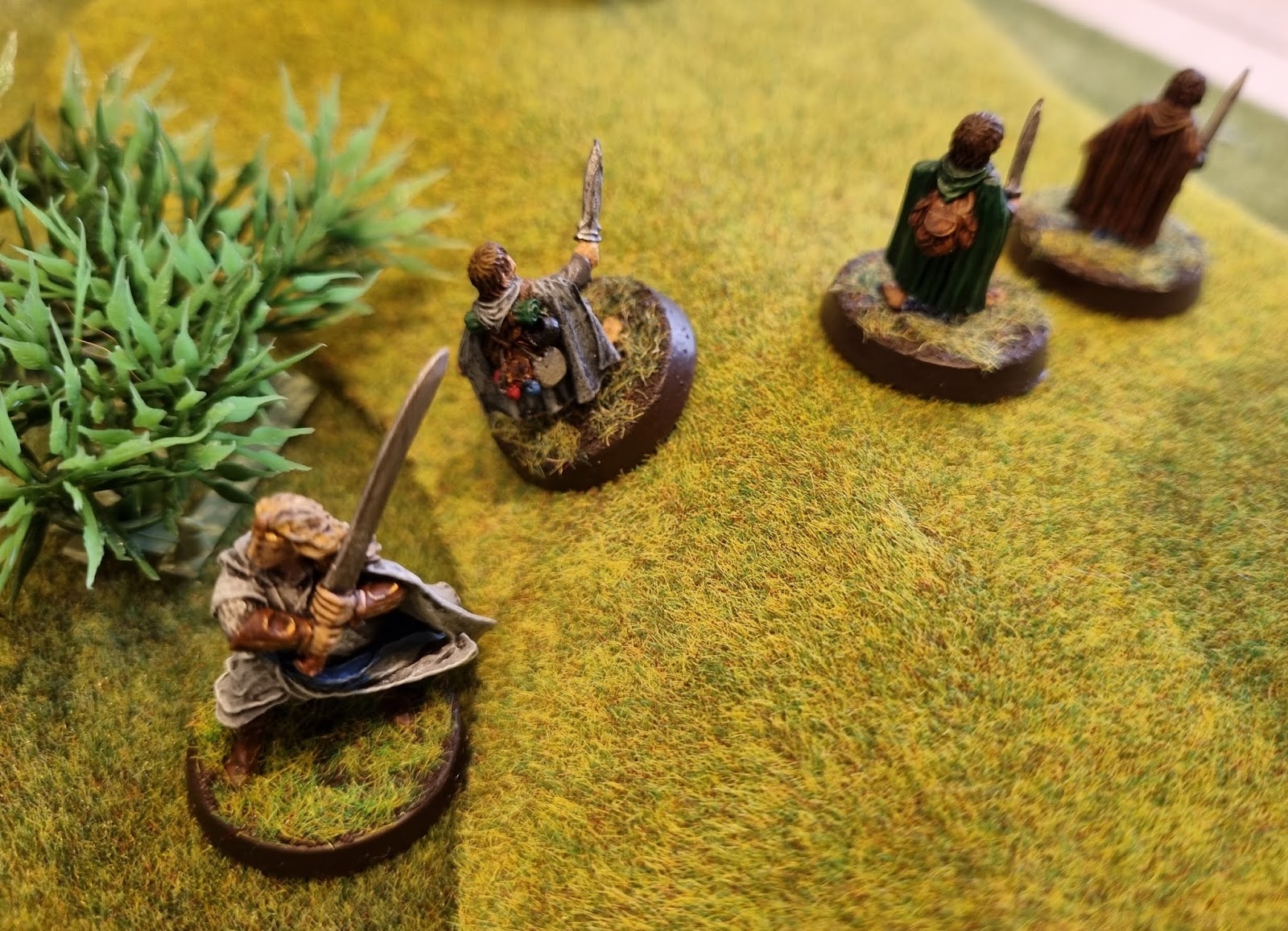 Gildor had successfully shepherded the hobbits to safety without a sword being swung in anger. 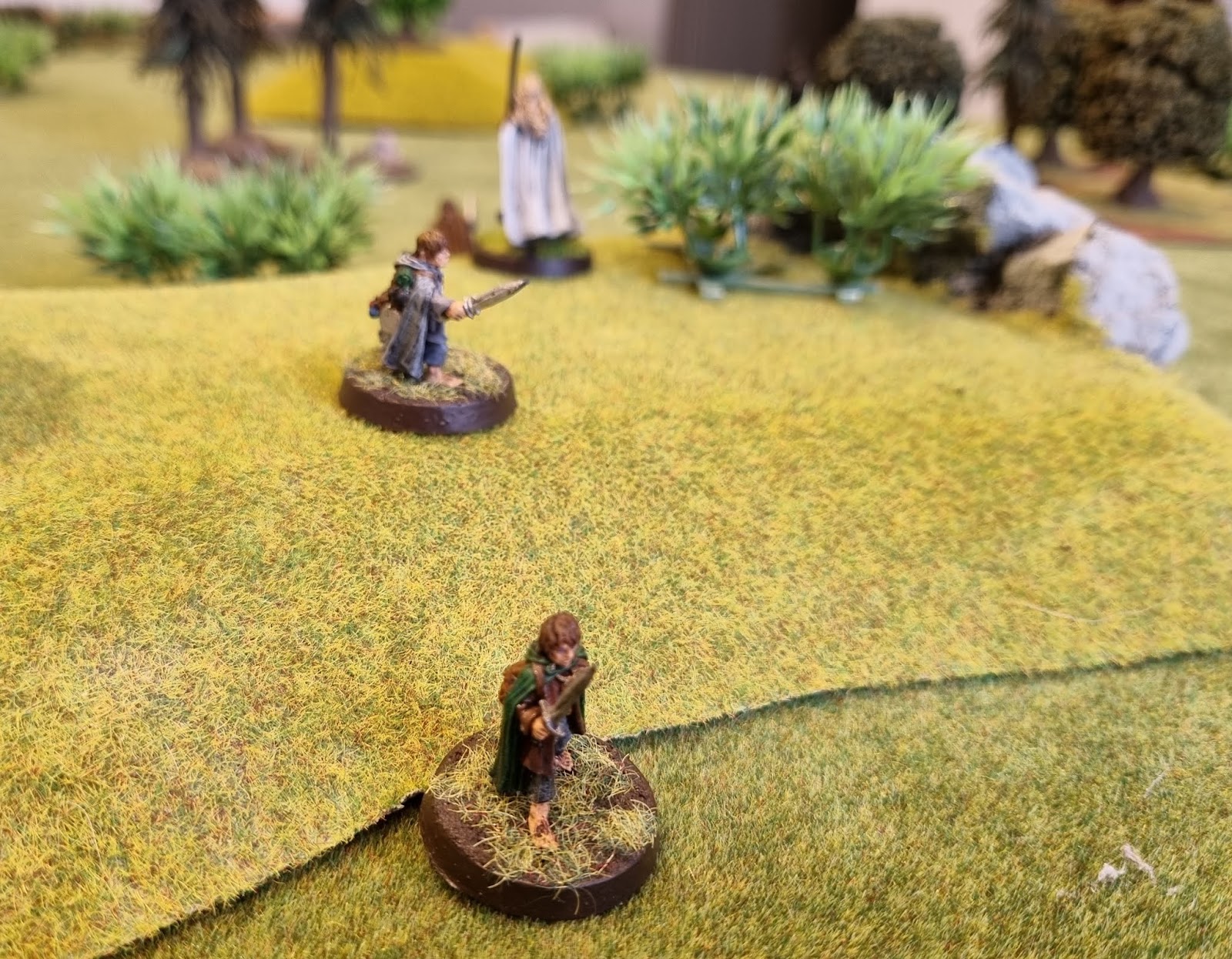 Even Pippin failing a courage test and wandering off to have a closer look at the robed figure on the horizon could not prevent Frodo from escaping with the Ring.
This was a bit of an odd scenario. For my part it was quite tense, but Matt said he felt he had very little agency in the game, which I understand. The dice never really fell for him and barring a couple of moments early on, he was never really in with a chance of spotting the hobbits.
As with last time, we played a second game and the hobbits were spotted early on (Matt rolled sixes at the right time) and we had a much more dramatic game with the Ringwraiths eventually driven off after wounding Frodo and the good guys' store of Might, Will and Fate was pretty much exhausted.
I do think this scenario is skewed towards the good side with the bad guys reliant on lucky rolls to really have a chance of stopping them.
In campaign terms we decided that Gildor was the 'bravest companion' as he called a Heroic March at a crucial time, Frodo managed to get his two Might points back, and Pippin was, appropriately, the 'Fool of a Took' for failing two courage tests. Ultimately, the hobbits will head into the next scenario, Buckleberry Ferry, in good shape.
I do actually have to build a small ferry (probably out of coffee stirrers, we're not talking P&O here) for that scenario, but one of the reasons I'm playing through a campaign is to prompt and motivate my painting, as it has done with Gildor/Glorfindel.
Acquired: 109
Painted: 114
Posted by Kieron at 00:50