Pete and I finally got our Dropfleet/Dropzone 'Battle For Earth' campaign underway with the UCM launching an assault on Earth's defensive space stations as a prelude to the main landings, and the Scourge overlords of Earth racing to intercept the fleet and deny the humans their staging posts. 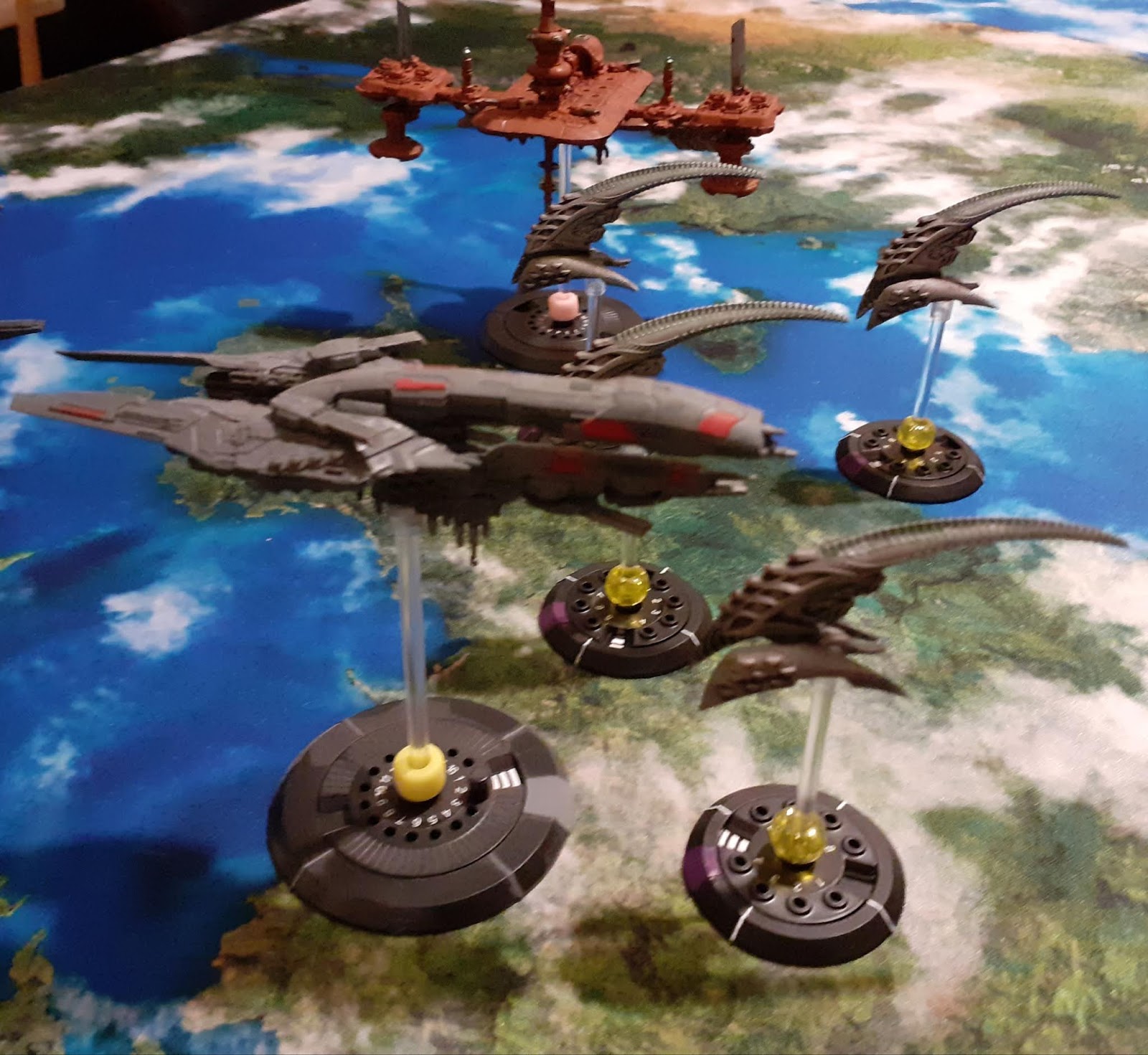 Our fleets were 700 points each and, as it has been a long time since either of us had played, were constructed with an 'I hope this works' mentality.
I plumped for a Hydra Fleet Carrier as my flagship, and a slew of Gargoyle Strike Carriers to try to seize control of the space stations. To do the fighting, I plumped for a battlegroup of two Yokai Light Cruisers and a squadron of Djinn Assault Frigates. 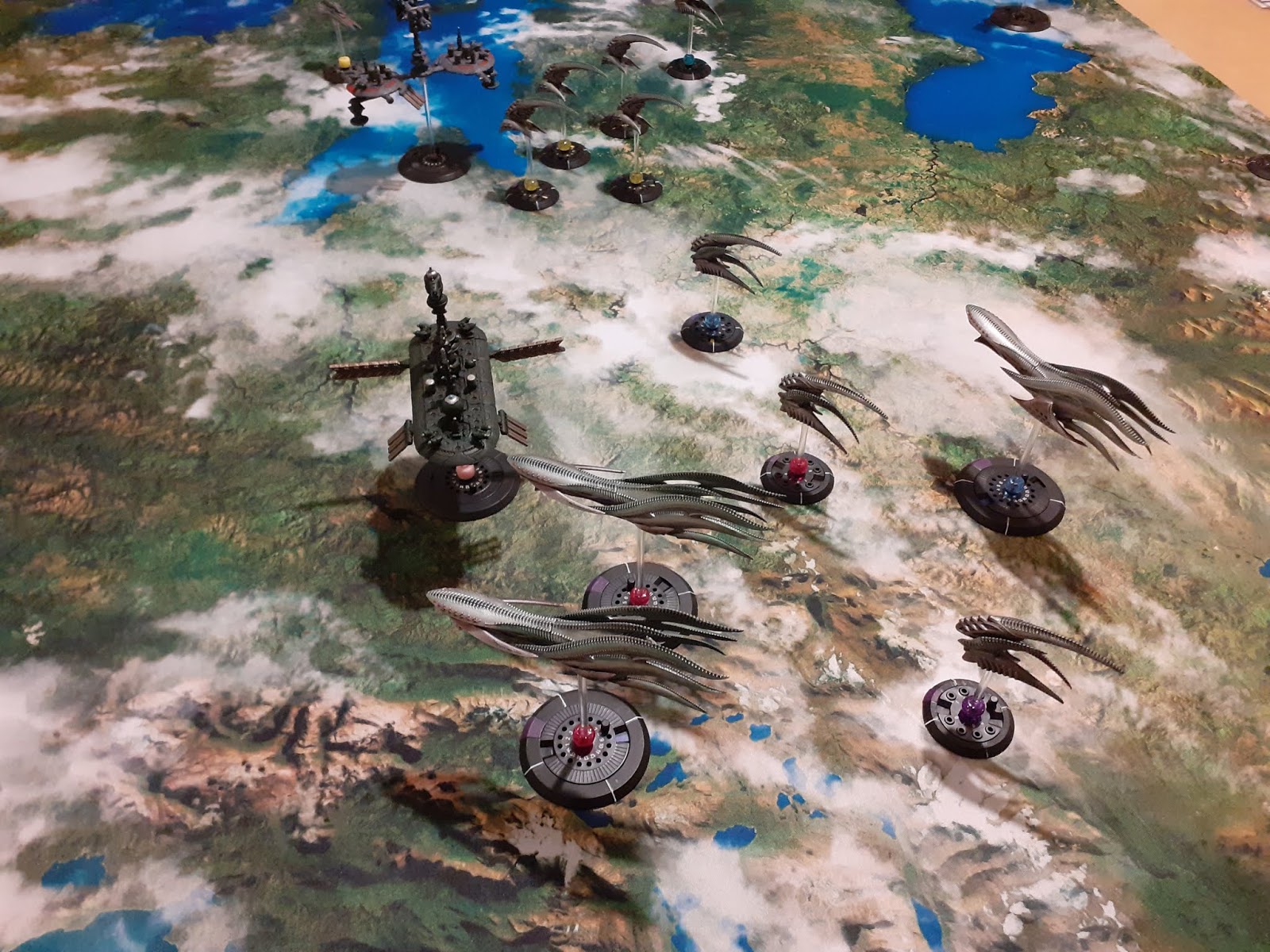 Pete had gone a bit more militant in that he had a Cruiser (sorry, I don't know most of the names of the UCM ships) as his flagship, and had also plumped for a bunch of Strike Carriers and a pair of Light Cruisers. He'd complemented these with a squadron of Toulon Frigates and a pair of the new Destroyers. 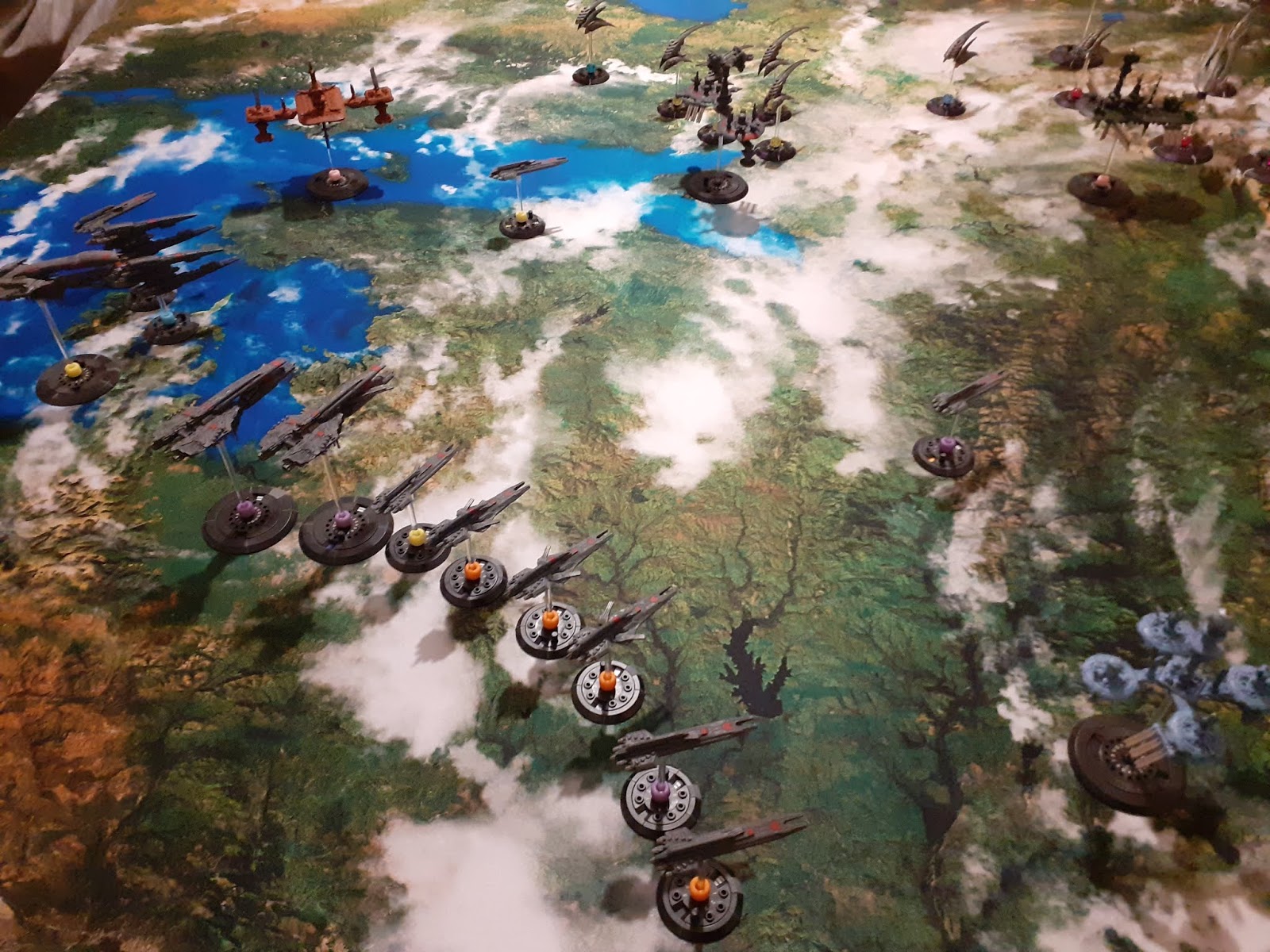 The opening turns saw our strike carriers making straight for the space stations and my Djinn squadron rushing directly towards the enemy, but falling short of being able to do much more than destroy a single Strike Carrier and leave themselves in range of the entire UCM fleet.

However, a combination of terrible attack rolls from Pete and us completely mucking up rolls on the crippling damage table saw the Djinn survive the barrage. What's more, when the Destroyers launched torpedoes at two of my Strike Carriers, we got the rules for shaking them off wrong too and they were got rid of rather than delayed.
To add injury to insult, on the Djinns' following turn they turned abruptly and ripped apart a UCM Light Cruiser in close action. 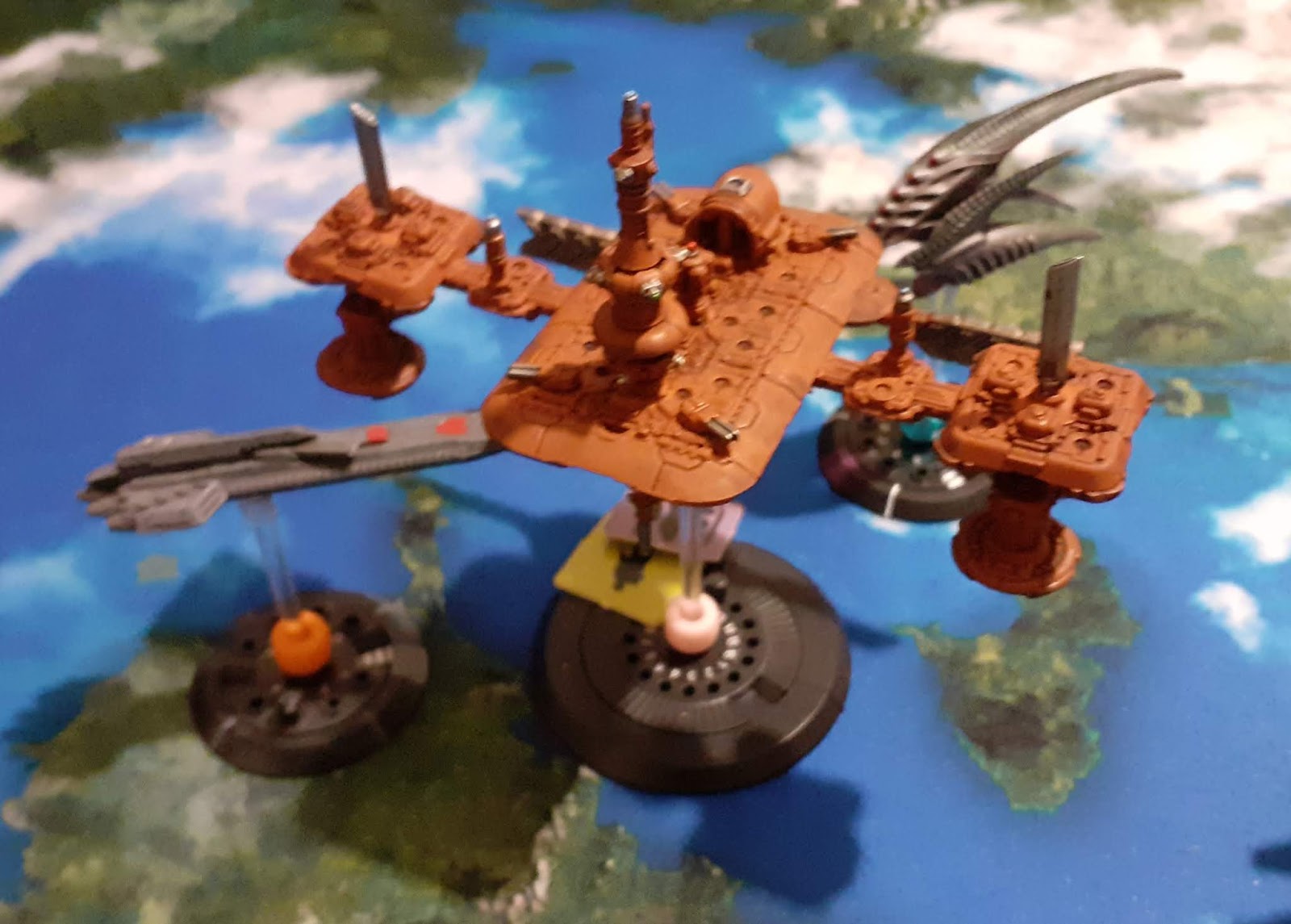 In the race for the space stations, I used the Gargoyles' speed to get control of three of them, bringing their mass drivers and burn-through lasers into action. Pete grabbed one of the space stations, and on the final one we both landed troops and a mutually destructive ground assault was fought. 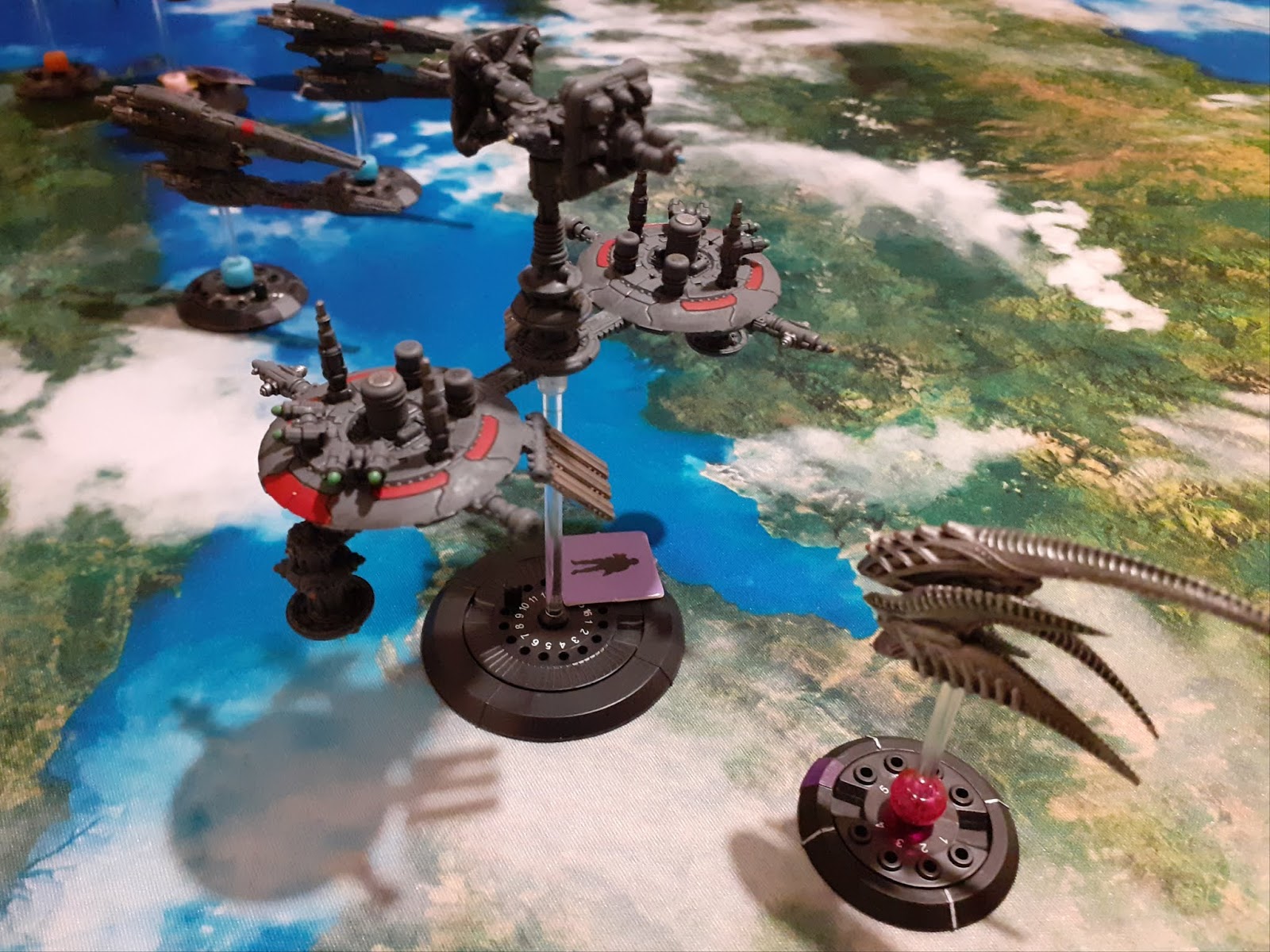 The UCM Destroyers made their presence felt by using their remaining torpedoes to destroy one of my Yokai, and they then got into close action with a Gargoyle, destroying it.
The Strike Carriers of both sides were prime targets as, without the protection of dropping into atmosphere, they were sitting ducks and the key to victory. A combination of space station guns and the Hydra Fleet Carrier finished off three UCM Strike Carriers trying to seize control of one of the space stations the Scourge held.
Unfortunately, the Hydra was destroyed by an explosion of one of the UCM ships. It had been crippled by a Barrage from the Toulons earlier. 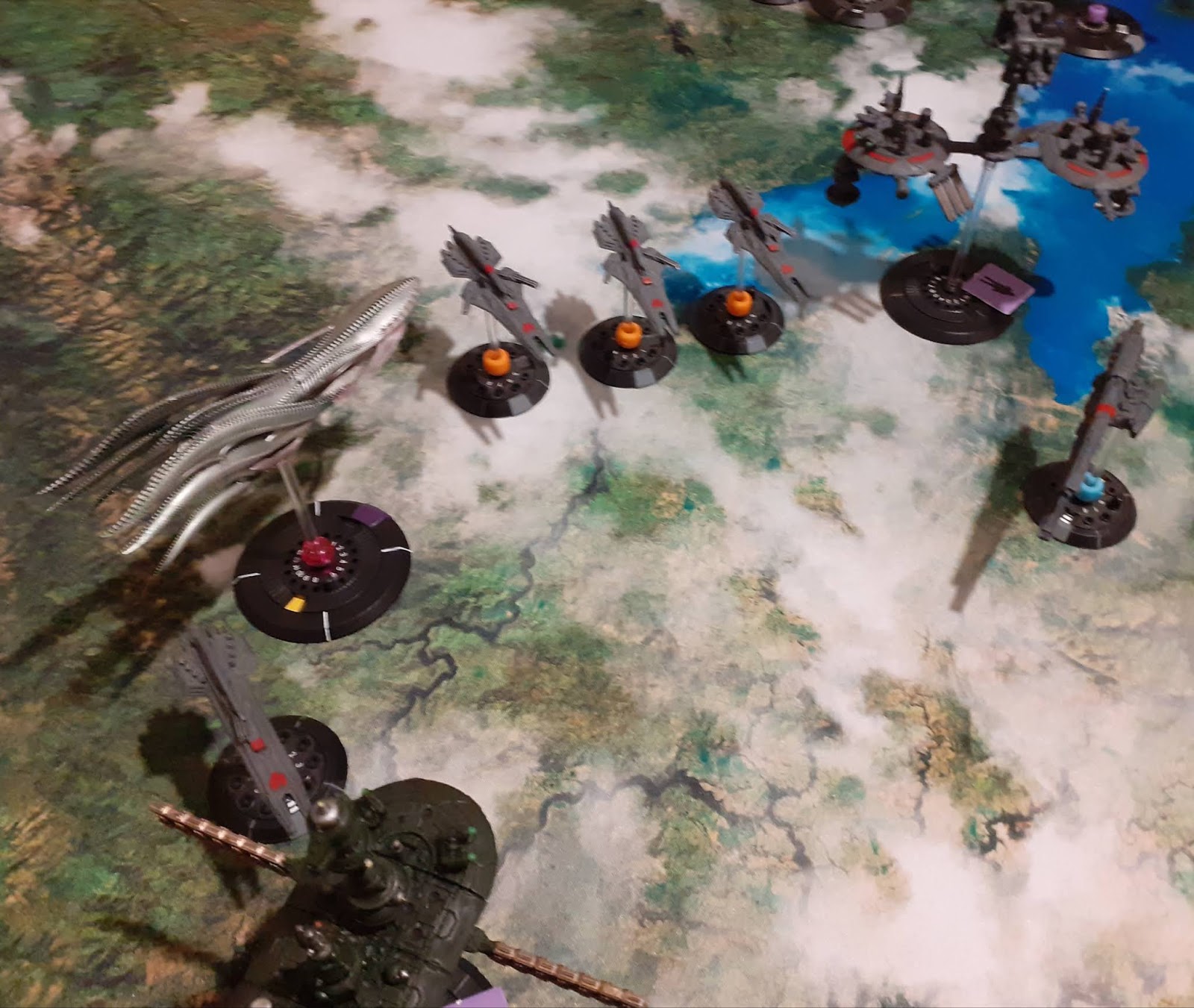 My remaining Yokai finally got into the fight by finishing of the over-extended Destroyers by flying into the face of the Toulons. 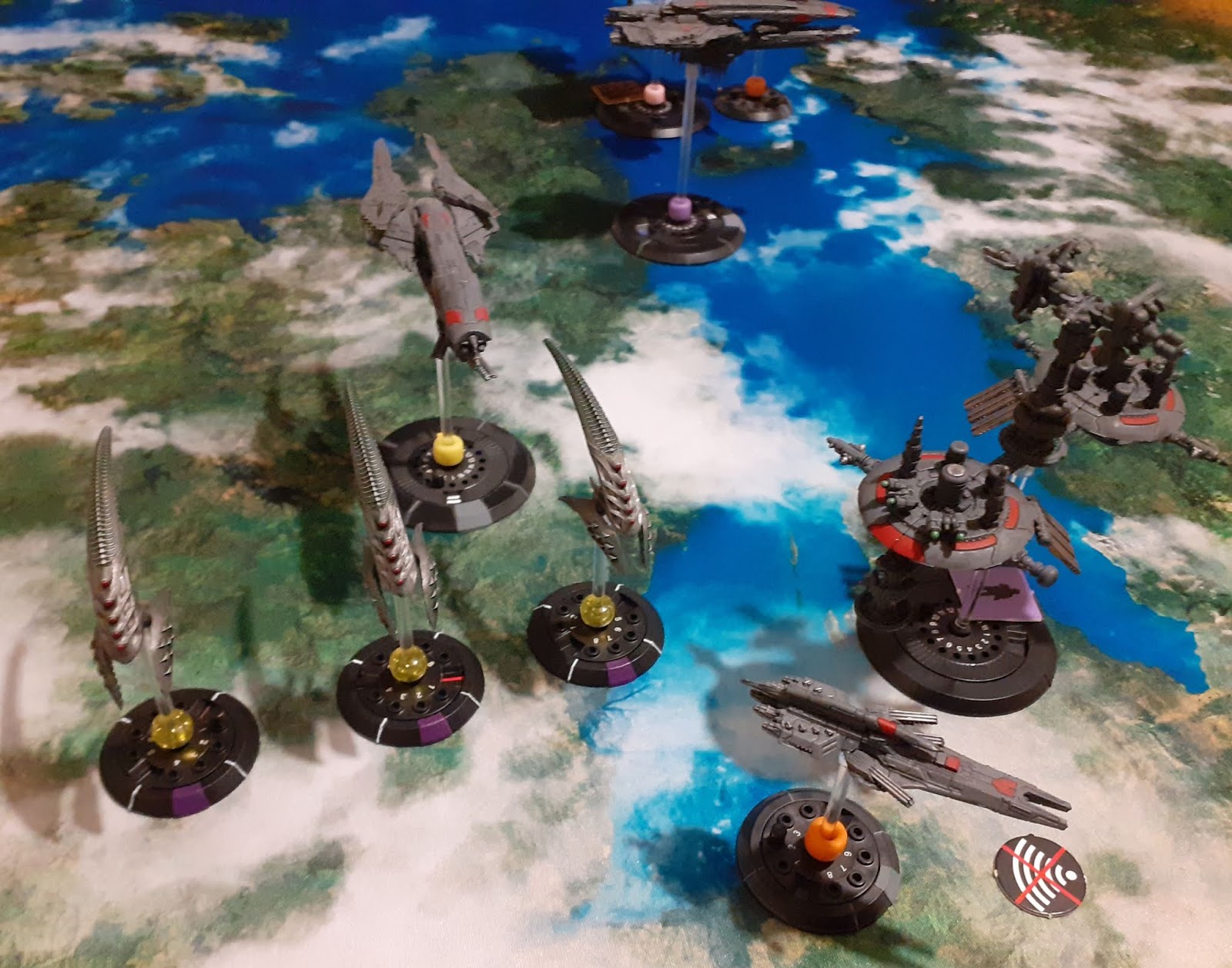 However, the Toulons were dealt with in short order by the Djinns coming in behind them, who were in turn taken out by the UCM flagship. 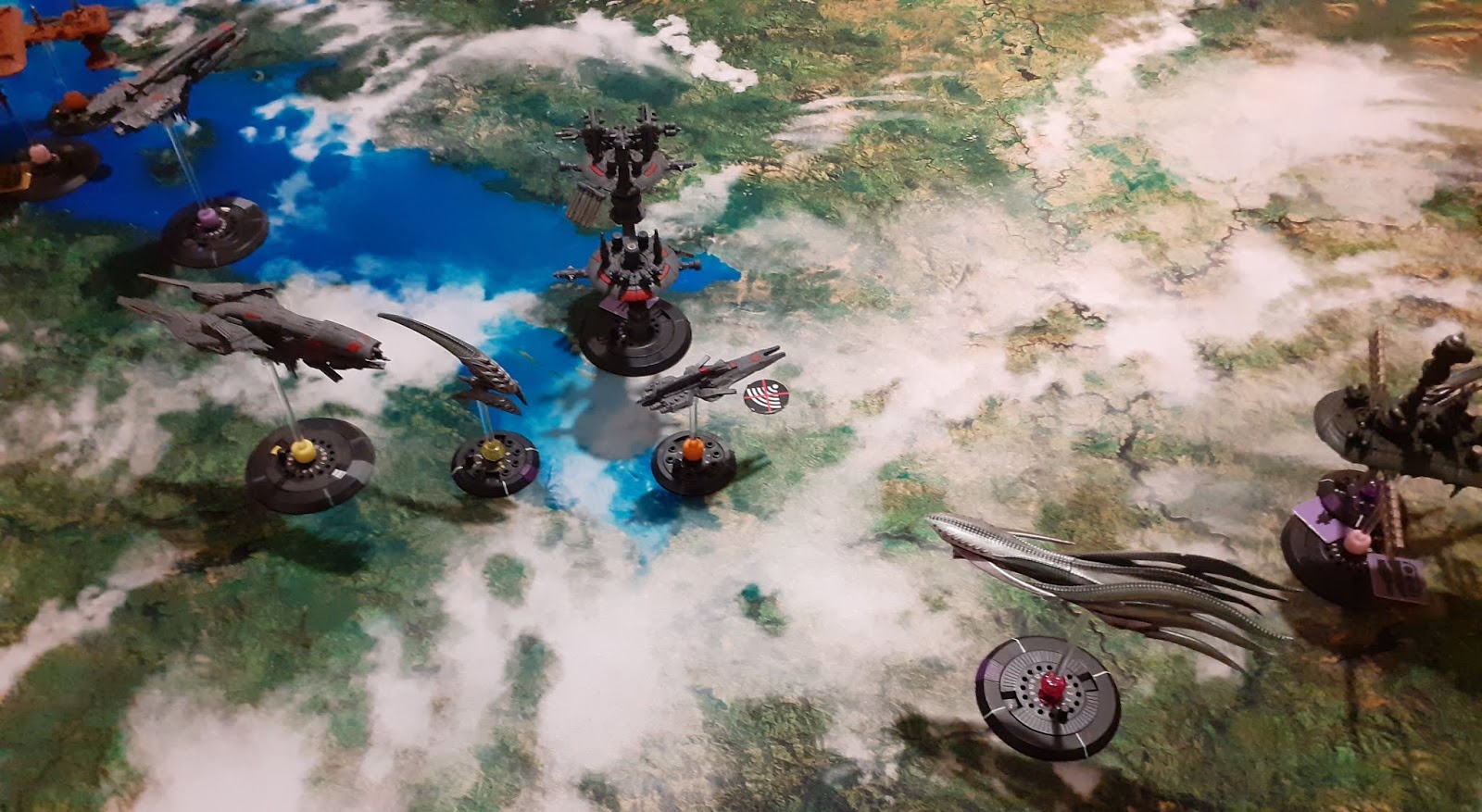 This put the Yokai in prime position to go 'weapons free' and destroy the not only the UCM flagship, but the remaining Toulon too.
With only one Light Cruiser left Pete conceded. There was a good chance that it would win a fight with my remaining damaged ships, but without any Strike Carriers he would struggle to also shift the Scourge ground troops in the space stations and prevent me scoring enough points to win in the final round.
I'm fully aware that our mistakes early in the game affected Pete more than me and probably cost him the game, but this was a good relearning game. What's more, my victory means that our next game in the campaign will be of Dropzone Commander, and looking at what is required of my currently meagre army, I'm not hopeful of a second victory.
I might need to paint some more stuff.
Posted by Kieron at 13:51