Following the success of my last zombie related posted, I'll continue the theme with some prisoners...you know, like in the Walking Dead Season 3...that's totally zombie related! 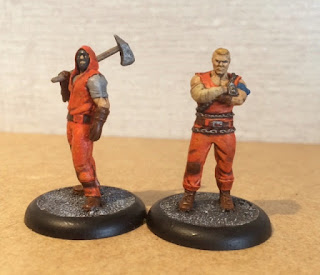 Okay, okay...I've been painting Batman stuff instead of zombies. These two are the creatively named Prisoners 3 and 4 from the second pack of Blackgate Prisoners. They are versatile fellows, able to work for everybody except Batman, Green Arrow, the Police and limited gangs like the Watchmen and Court of Owls. As they're fairly lost cost in terms of reputation, they are good for filling gaps or bringing a particular skill to the gang, for example, Prisoner 3's Axe brings low cost blood damage which is good for finishing off the injured, and Prisoner 4 has the Bodyguard trait enabling him to literally take a hit or two on behalf of more important models.

I've painted these two in order to be ready for my next Batman event, which it this weekend. It's themed around the seminal Long Halloween story and the focus is apparently more on narrative than tournament play. What's more, it's an escalation event, with the first game being at 200 rep, the second at 250 and the final two being at 300 rep. To help with gang construction, you're also not limited to keeping the same models in every crew.

I've decided to take Poison Ivy to this event for a number of reasons. Firstly, it's my most recently completed crew and I want to give it a run out, secondly I want to run an Ivy crew with Mr Freeze in tow as an homage to the critically acclaimed 'Batman & Robin' in a change to the usual Gotham Sirens theme that may Ivy players run with. Finally, given the event rules and the narrative focus, I felt that it was an interesting idea to switch Ivys during the event as she 'evolves'.

I'm really looking forward to this event as it is being hosted by the same people who ran the UK leg of he Worldwide tournament. Many of the spectacular tables that were on display there belong to them and given the organisation of the actual day, I'd imagine that the day will be really smooth. Most importantly though, is the narrative element. That's the area of the Batman game that I feel sometimes gets overlooked, and something I would like to see much more of.

Given that I've admitted that the Prisoners really aren't for zombie gaming, I felt it necessary to get at least one zombie done, and here he is... 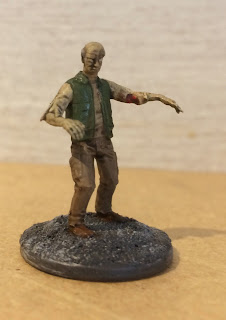 Another Studio Z-Clips model. Not very exciting, but it adds to the horde.

In other zombie news, we're playing Last Night on Earth as part of our traditional Halloween Long Weekend gaming. As yet, the survivors have never survived in any game we've played of it, so we'll see how it goes.

Expect an event report next week. 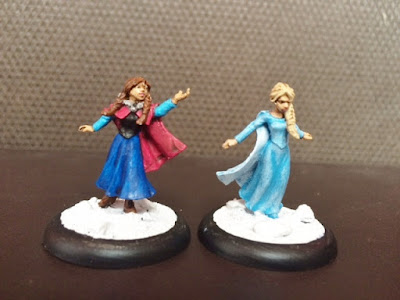 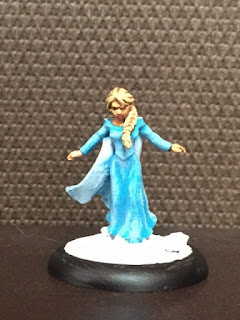 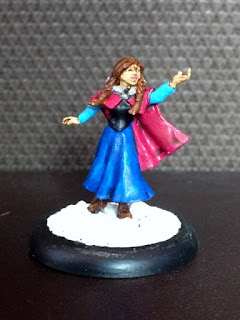 I've really been struggling with Zomtober this year, but hopefully there'll be an equally appropriate entry before the end of the month.
Posted by Kieron at 04:15 10 comments:

Zomtober: Who's that girl?

And so I continue to flagrantly ignore the rules of Zomtober by posting midweek, I present my latest offering. 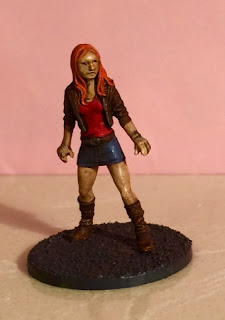 This model is from Heresy miniatures and is destined to be used as Stephanie, the main character in my solo 7ombieTV campaign. She's currently unarmed, but those nicely sculpted open hands will be easy to pop a range of temporary weapons into.

The picture has highlighted that her face is a bit off - she looks like she's been punched. At the moment I'm not getting a lot of time for painting and late nights combined with poor lighting have led to an odd looking face that I'll need to revisit.

As the model is one of Heresy's definitely-not-related-to-Doctor-Who-in-any-way range, I decided to paint her up fairly similar to Amy Pond (Karen Gillan). This gives me the option of branching into some Doctor Who gaming at a later date. I have some Daleks from the front of a magazine somewhere.

I think I'm going to be dividing on Stephanie's rag-tag band of survivors for the rest of the month so I can continue my solo campaign.
Posted by Kieron at 12:04 12 comments: 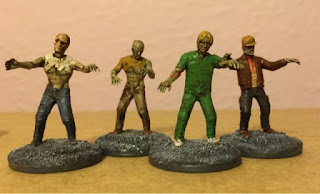