Back From The Dead

Sorry for the absence of posts for the last couple of weeks. A combination of busy times at work, family events at weekends and suddenly playing catch up with a number of TV series has curtailed my painting and playing time recently.

However, normal service should now be resumed; and what better way to get back to business than with a new game- Mantic's Walking Dead: All Out War.

For a variety of reasons, I've been resisting this game for a long time. I resisted the Kickstarter last year because I'd backed the Dropfleet Commander Kickstarter at around the same time and I already had zombie stuff. After Christmas it was, well, after Christmas and I figured I should be able to hold out until my birthday in April.

Gameplay videos started popping up on YouTube and not only did the miniatures look good and characterful, but the mechanics appealed to me, as did the fact that there are fully functioning solo rules. In an attempt to stave off temptation, I got back into watching the TV series (which I'd stopped midway through series three), but this only made matters worse and a couple of weeks ago, I cracked and bought The Prelude to Woodbury Starter Set.

This isn't the full game, but a solo starter which comes with a single survivor, five walkers and almost everything that you need to get playing. 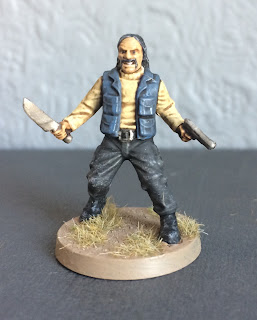 The survivor in the set is Brian Blake, aka the Governor of Woodbury. As you can see, the character design is based on the comic book rather than the TV series, and he's still got all of his body parts. This is because the three scenarios in the set detail his adventures in the outbreak before becoming the Governor (hence 'Prelude to Woodbury'), and in game, this incarnation is actually fairly average. I'd imagine that when they get to a Woodbury expansion, the Governor will have a few bells and whistles in his rules. 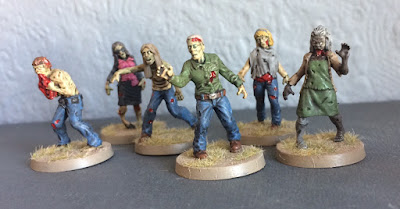 The five walkers in the box (yes, I know there are six in the picture...I'll get to that) are all individually sculpted. In fact, every walker in the game is not only unique (the only exception to this are the ones that come in the Walker Booster pack), but is also based on one that actually appears in the pages of the Walking Dead comic book. Compared to the Wargames Factory (now Warlord) zombies I usually use, these are chunky, but much better sculpted and a damn sight easier to assemble, given that they are all one piece sculpts.

I've stuck to my usual zombie flesh routines and kept the gore fresh with Citadel's ridiculously named Blood for the Blood God paint. I know that logically, the blood wouldn't still be glistening red on walking corpses, but I like it, and anybody trying to use logic and science in a conversation about zombies probably needs to take a long, hard look at themselves. Perhaps the only differences to my usual zombies are the fact that I've gone for a rural, dried earth type base effect (more on that later) rather than urban, and given that the story is set around Atlanta, there is significantly more denim knocking about - a stereotypical view of the South, I'm sure, but it makes sense to me. 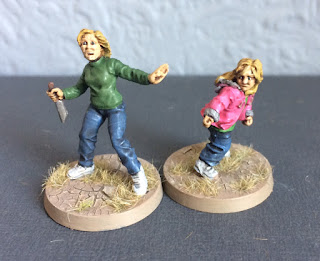 Given how much I enjoyed painting the contents of Prelude to Woodbury, I picked up my first expansion booster this weekend. Each of these (with a couple of exceptions) come with three miniatures, which are usually two survivors and a single walker, along with a number of game cards to add to the resources you have available.

The Carol booster includes Carol (unsurprisingly), who is much less of a badass and significantly more unstable in the comics, and her daughter Sophia, who apparently doesn't end up shambling out of a barn either. I also got four equipment cards, to add to the four I got with the Prelude to Woodbury set, and an alternative character card for Derek, a character in the main game box. Until I get the main box, there's no reason why I can't use the Derek card with another suitable miniature from my bits box.

Both of these are really characterful miniatures, and look suitably terrified. One of the issues I have with a lot of zombie miniatures, is that the survivors are mainly armed-to-the-teeth paramilitary types. I've always been more taken with the early stages of an outbreak, and the abject panic, hit-them-with-whatever's-to-hand set up, and this range really suits that aesthetic. Sophia is probably my favourite miniature in the range. Partly because it's a great sculpt with nice details - her hood has cat ears - but also because I've been able to give her a completely impractical bright pink coat.

I'm not sure how effective either of them will be in game, but they were fun to do. 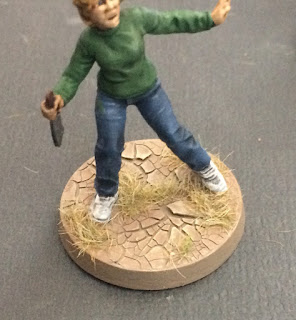 You may also notice that I've been doing something different with the based. To simulated the baked earth of the Deep South I see in the TV show, I've used one of Citadel's textured paints, Agrellan Earth, for the first time. I've done an undercoat of Baneblade Brown (where do they get these names?), then liberally dolloped on the textured paint. After leaving this to dry for a few hours, it naturally cracks. A quick drybrush with Ushabti Bone, and then some static grass in the sections without cracks, and job done.

I'm really happy with this effect, as not only is this really simple to do, but using sand on integral bases always has the effect of making seem like the feet are sinking into the earth.

I'm really enjoying painting the Walking Dead miniatures and you can expect to see more pop up on the blog over the coming weeks. I've run through the solo scenarios from Prelude to Woodbury, which although a bit limited, gave me a good feel for the game, and I also played a two player game against Wes, who's also bought in, and can only report good things about how the game works.

I'm now looking forward to getting creative and making some scenarios of my own in the coming weeks, as well as adding some suitable terrain.
Posted by Kieron at 06:40 10 comments: 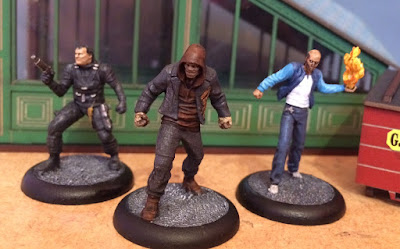 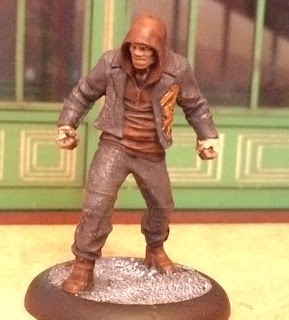 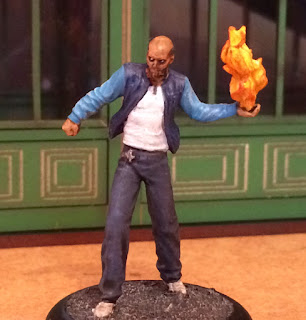 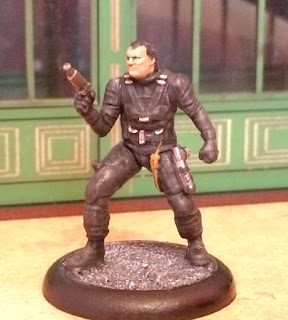 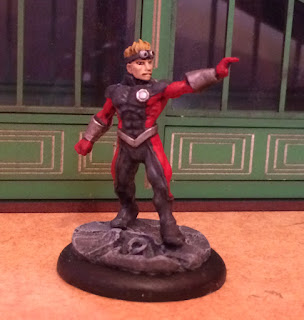 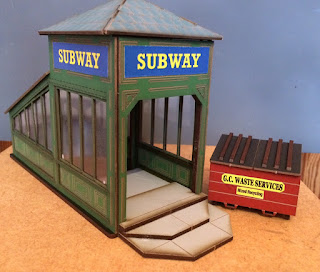 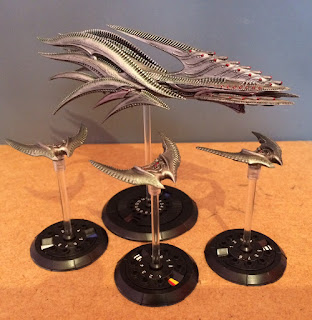 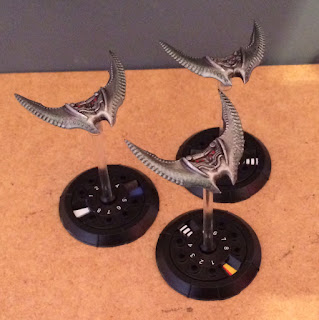