Happy Christmas...belatedly!
I trust the annual festival of over-indulgence and pretending it's 'for the kids' is treating you well. I've been a little out of sorts with blogging for the past couple of weeks as life gets a bit busy at this time of year and so finding time to actually paint has been quite tricky. I'm pleased, however,﻿ to be able to squeeze something in under the wire.
These two are the very last Soviet models that I had unpainted for my Bolt Action army (barring a single sniper/AT rifle figure that I don't know what to do with.

The woman on the left is an excellent miniature I picked up at Salute this year as the free model that everybody gets on entry. Although technically from the Russian Revolution, she makes an excellent banner bearer for my WW2 army, and allows me to make use of the special rules for banners that are included in the Ostfront Campaign book.
The plastic chap on the right was the previous intended recipient of the army banner, however, I never got round to actually adding the flag. As a result, he's had his arms pulled off and replaced. I decided to give him a Panzerfaust to increase the already many and varied anti-tank options (tanks, bigger tanks, AT rifles, AT guns, grenades, dogs!) in my army. I'm a bit concerns with his face looking weird (probably the paint was too thick), and so he may very well get a head swap too. And, no, that isn't a mould line on his arm...it's a seam!
Amusingly, not sooner have I finally finished off my Soviets, I have now bought an armoured car with some Christmas funds. Helped by a voucher from the kind folks at Warlord for late delivery (which I never noticed at the time I got it) and a free shipping offer, the BA-6 will only be costing me £10. Less amusingly, the day after I ordered, Warlord put the damn thing in their sale and knocked another £5 off, although I don't think I'd have been able to claim the free shipping at that point, so I'm not too miffed.
﻿
With only two days of 2017 remaining, it's time for a review of...
Last Year's Gaming Resolutions
1. Paint my Dropfleet Commander force
As followers of the blog will know, I have had an intermittent stream of silver, tentacly spaceships popping up on the blog throughout the year. I still have more to do, but this is mainly because I ended up with loads thanks to various trades that I did. I still have a sprue of frigates to build and another half dozen or so cruisers to assemble. Despite this, I have been able to play games of varying sizes and there's been no real rush to complete the others. When Matt eventually challenges me to game using his battleship, I will probably do some speed painting of the rest. I'm calling this one a partial success.
2. Complete a battle report for 7TV at least once a month

I did well for a while on this one, but things have slowed down since the summer. Perhaps the main reason for this was that I've just not had that many games of anything since then. I did manage to do some playtesting on behalf of Crooked Dice in September, and I have posted pictures to the 7TV Directors group on Facebook that hasn't made it to the blog. Whats more, casts for TMNT, Scooby Doo, Doctor Who and other genres have been completed. I also appeared in the pages of Wargames Illustrated following the 7TV Day in June. However, I didn't meet the letter of the resolution, so this one is only a partial success too.
3. Play more big games
This one is a definite fail. I need to find a board solution for my house which allows me to play 6x4 games.

4. Paint what I want to paint

This, however, is a definite success. My output of painting has increased, and so has the variety of what I paint. I appreciate that it can be frustrating to more focused folk that I still haven't got around to finishing off my DZC resistance, but I'm enjoying painting more than I ever have done. I just need to do something about the fact that my eyesight is definitely getting worse!
5. Run a campaign of something...anything!
This is also a success. Earlier in the year I ran the 'Gibraltar of the West' campaign for Black Powder (the campaign is actually written for the 'Altar of Victory' game) and Matt and I marshalled the Union forces to a fabulous 'against the odds' victory in the largest battle of the campaign, but then got our flank set upon and smashed by the notorious secessionists Pete and Wes as we tried to encircle Vicksburg and snatched defeat from the jaws of victory. It was fun though. I've also been making slow progress through my solo Walking Dead campaign, and with everything painted for Days Gone Bye, there is more to come.

So, all in all, a largely successful year. And now for...

Despite enjoying my more haphazard approach to painting, my painting backlog has grown. I have taken great pleasure from finishing things off like the Walking Dead and TMNT miniatures, so I still want to finish off and draw a line under at least three of the following: DZC Resistance, DFC Scourge, War of 1812 Americans, FOW Americans, Necromunda Orlocks and Marvel Heroes.

I need to come up with a way to make a 6'x4' in my kitchen, despite only having just over a 3'x3' table. This means not only finding a way to support a larger board, but I also need to find somewhere to store the damn thing. Any helpful suggestions which don't require an extension will be gratefully received.

I've been slowly amassing a small collection of pulp figures suitable for lost jungles and ancient temples which I want to paint. However, I will also need to build some suitable terrain. I've made some headway in this direction already and there has been a series of truly inspiring articles by Mr Awdry over at 28mm Victorian Warfare which have shown me the way forward. Dinosaurs, archaeologists, Nazis and cavemen coming soon!

I thoroughly enjoyed the ACW campaign and I think it hit the sweet spot of having a sense of development without being too onerous for those taking part. I want to do something else like this, perhaps for Dropzone, Sharp Practice or Blackpowder again. However, I'm also keen to play some more games of classic Necromunda. My solo campaigns will chug on in the background.

I'm conscious that this has been my least productive year for blogging since 2014, and this has been due to some particularly fallow periods. I've also had some extremely productive periods as well, which may or may not have tallied up with school holidays. I want to achieve a more even posting rate next year.

And that's it. I really appreciate the support that I receive on this blog, as it genuinely helps maintain my motivation for painting and modelling. Have a great new year!
Posted by Kieron at 08:06 6 comments:

This week I’ve painted another half dozen War of 1812 US Regulars from Matchlock Miniatures. This time, however, they are in the 1814 uniform (yes, the ‘War of 1812’ wasn’t just confined to 1812...terrible name for a War) and accompanied by an officer. They’ve also been complemented by some appropriately Canadian weather. 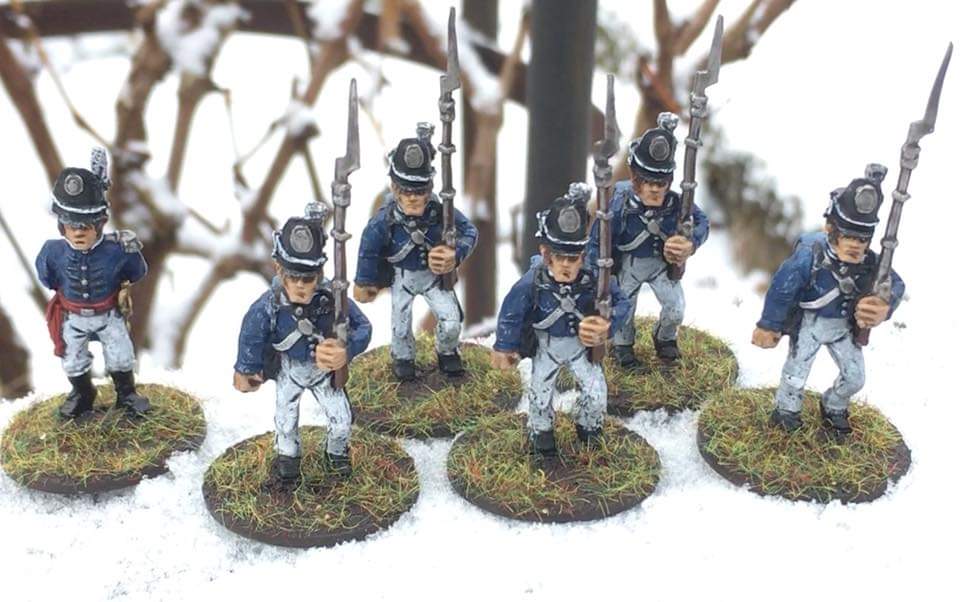 I’ve always been aware of the fact that Napoleonic uniforms kept changing and have never really thought about why.

I know it won’t apply to every change of uniform, but whilst I was painting these guys it occurred to me that the US Army changed its uniform to make it easier to produce during the war as the later uniform lacked the facings and lace details of the earlier design. This made painting them much faster, and I can only assume it did the same for the manufacturing process.

Sadly, they kept the labelled backpacks... 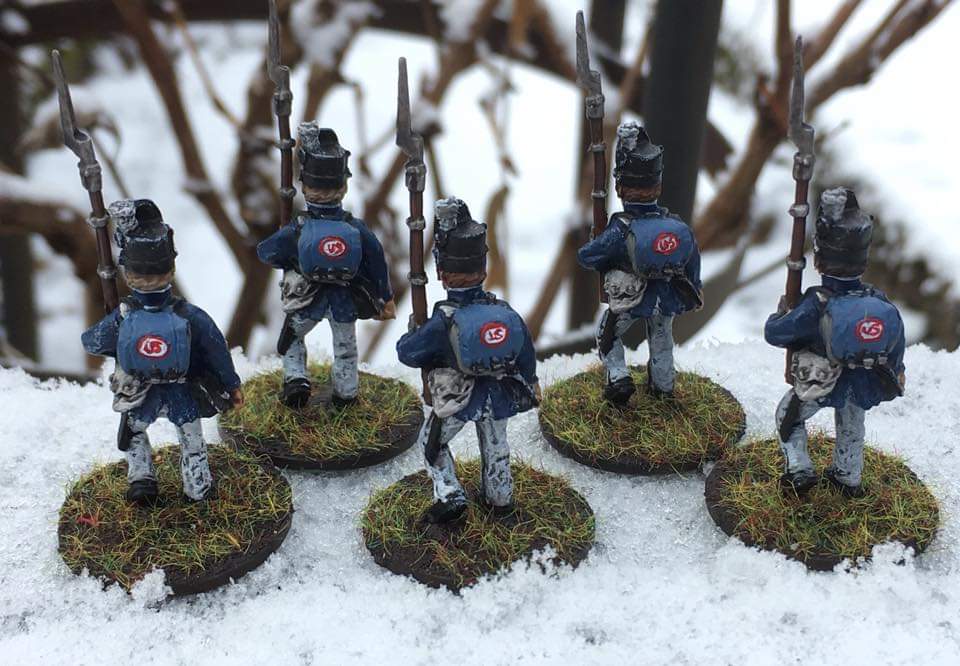 I think the single epaulette on the left shoulder  indicates that the officer is a lieutenant (I need to check that), which makes him perfectly appropriate to lead my small scouting force as he’ll only actually have 16 regulars directly under his command, along with a motley collection of other detachments. 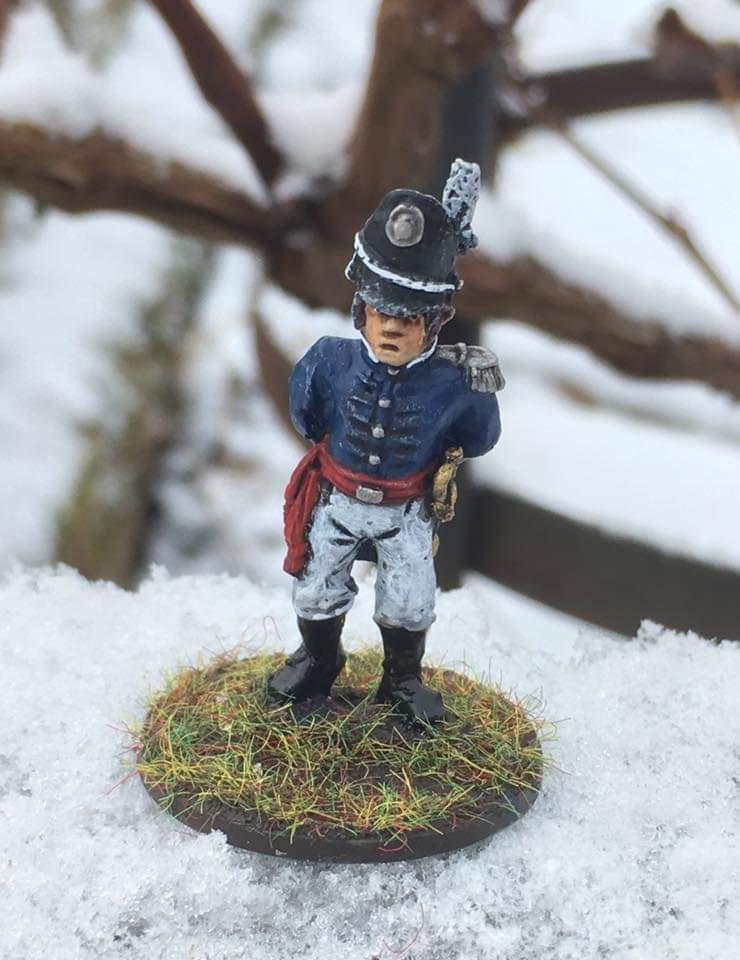 Despite them being somewhat old fashioned in their style, I’m quite enjoying painting the Matchlock Miniatures. However, next up are some Woodsmen from Wargames Foundry.
Posted by Kieron at 05:21 4 comments: 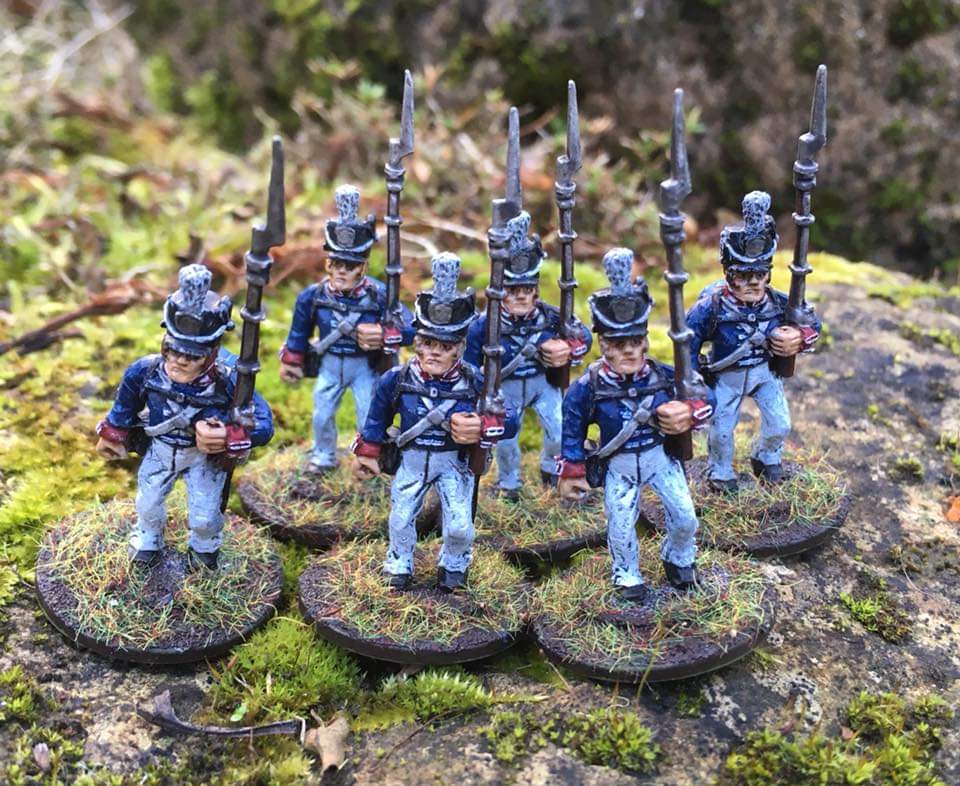 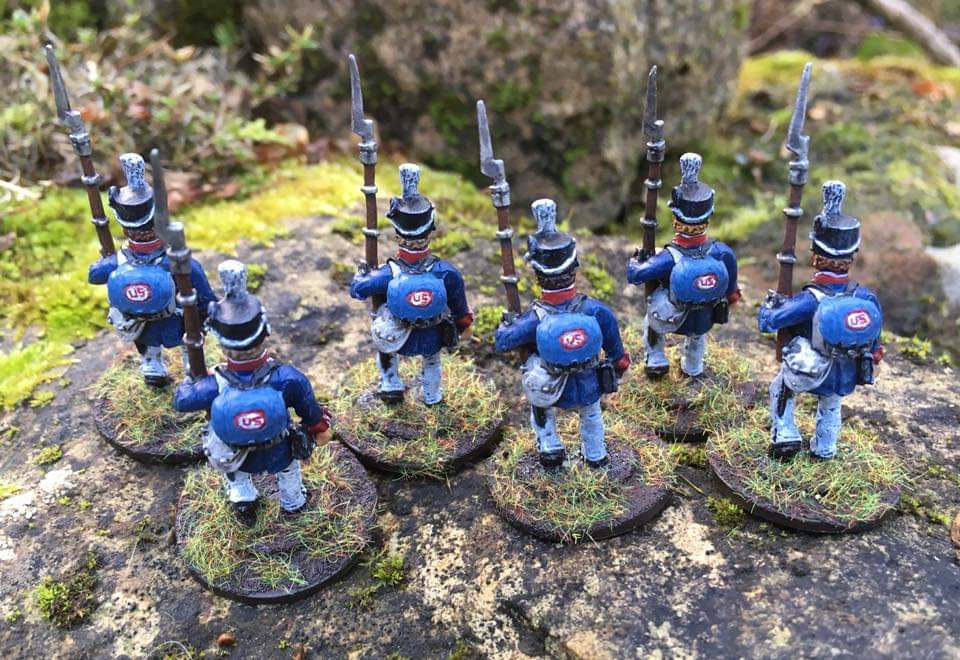 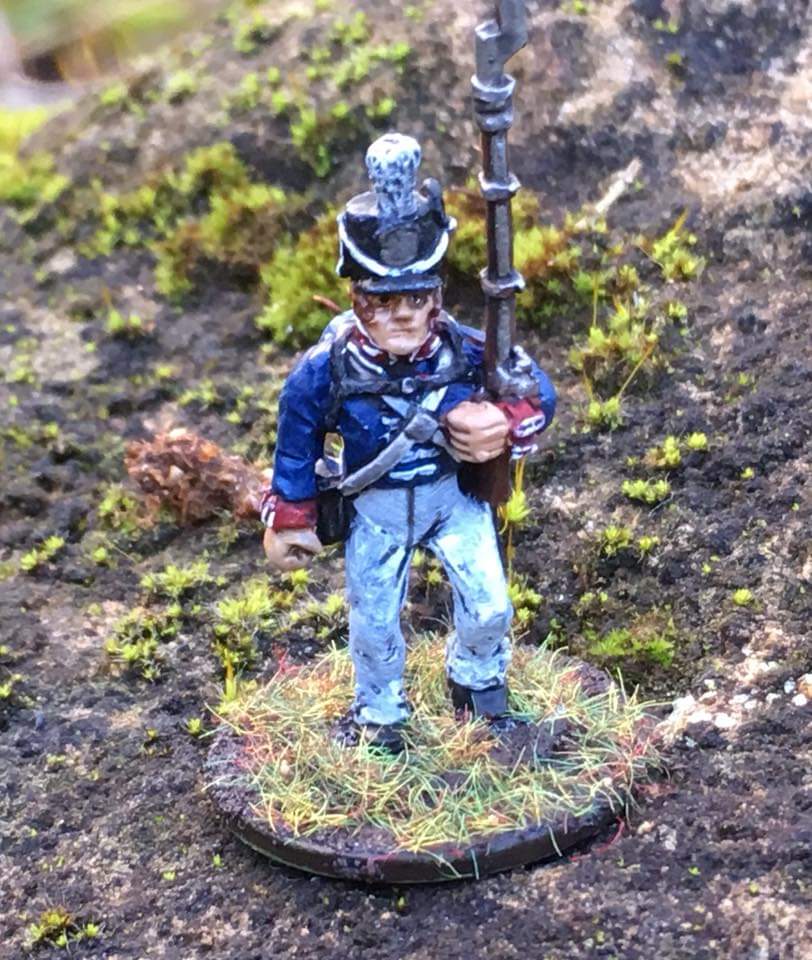 However, I now have two groups painted. With the addition of an officer or two, I should be able to have a small test game of Sharp Practice, putting my Americans against a Native force.
Posted by Kieron at 05:45 8 comments: