What happens if you meet a two-headed giant from Yorkshire?

You get Ettin!
I’m here all week, folks...
More of the Descent miniatures, and this time they’re bigguns. Two Ettin (Ettins?).

These are nice chunky figures with plenty of detail and character. Again I’ve tried to keep the painting simple to get them done quickly, and I think it’s turned out well.

Once again I’ve tried to distinguish the master from the minion with a splash of red, this time with gore splattering the massive club.
Unfortunately, I splattered and splashed with a bit too much enthusiasm and when I was taking these photos I noticed I’d dropped blood onto the Ettin’s belly, armour and base, and so a hasty cover up ensued which appears to have only been partially successful, and so I’ll need to go back to it.

If I have a gripe with these figures, it’s the fact that there are some hefty mould lines across the shoulders (which you can see above) and down the sides of the models.
I’ve decided that I’m not going to get too worried about this as it would be a lot of effort to fix, I’m deliberately trying to get them done quickly, and these are essentially board game pieces.
Next up, probably, are some Zombies and things called Flesh Moulders, who have a bit of a zombie vibe to them - I’m hoping to rattle through them as a group during the course of a week.
Posted by Kieron at 11:54 6 comments:

“We are now starting our Descent...”

In my last post, I alluded to exciting things happening. Primarily, the cause of this has been my birthday, which is always the point in the year where I forget all my promises about working through existing projects and ask for and buy big boxes of new figures for games I don’t play.
Last year it was The Walking Dead and Terminator, both of which are still ongoing. This year, it’s happened again...twice.
One of the big boxes of new stuff is Descent from Fantasy Flight Games, which I’ve acquired due to my enjoyment of playing through the Imperial Assault campaigns run by Pete. Descent is essentially the forerunner of Imperial Assault and given that buying and painting a game I’ve already played through seemed odd (even if it is Star Wars), I decided to take the plunge into the fantasy world of Terrinoth.

Obviously this means painting is required. A lot of painting. I’ve tried to keep thinks simple and quick, so that I can plough through the plastic pile. Therefore, don’t expect to see my best work on this stuff.
You’ll also notice that even though the miniatures are single sculpts, I’ve painted one of each group slightly differently, usually involving red. This is because the game divides monsters into minions, which come in cream coloured plastic, and the slightly tougher masters, which are red plastic. I wanted to keep a simple visual cue for the players to know what they’re up against.

The goblins aren’t great models. They are small and spindly, the arrows are sculpted oddly and the had quite a lot of flash to clean. They’ve turned out okay, just don’t look too close.

I like the cave spiders. Mainly because, to my mind, giant spiders are the quintessential fantasy gribbly (I blame Tolkien), and back when I used to run D&D sessions, I would always try to sneak a spider or nine into an adventure.
Unlike the other models, these needed removing from their bases to paint and base them. I probably should have done more highlighting, but they’ll do.

Of the three groups I’ve done so far, I like the Barghests (sort of zombie wolves) the most. This is because the combination of drybrushing and washes (my painting ‘techniques’) works best on fur, and slopping on some Citadel Blood for the Blood God also lifts what could have been some quite flat and featureless areas on the zombie side of the models.
And that’s it for now. Expect to see some Descent monsters and characters popping up fairly regularly, as I want to start a campaign fairly soon.
And as for the second big box of figures? There was something else I liked about Imperial Assault, beyond the gameplay...that should give you a clue...
Posted by Kieron at 03:23 5 comments: 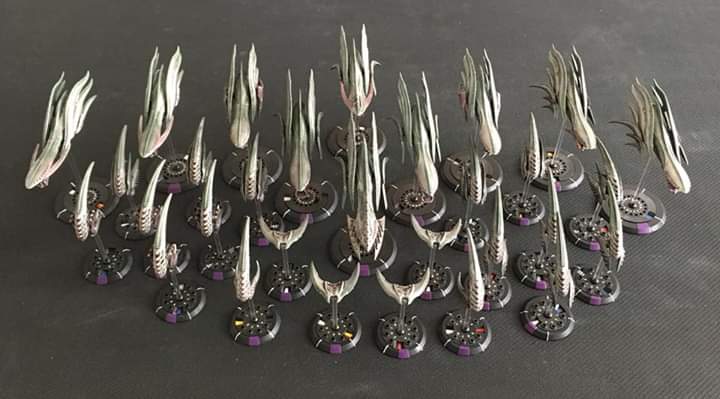 Four Scylla frigates. These are unusual ships which possess the ability to fire upwards from atmosphere without penalty. I can imaging them at their best when lurking below a space station, blowing up enemy carriers as the seek to land their troops.
Also, as they’re called Scylla, I fully intend to sing ‘Surprise Surprise’ every time they shoot.
My intention when backing the Kickstarter campaign was to get enough ships in one go to ensure that I didn’t need to buy more. Building my own corvettes was part of this plan.
However, not only have I not finished my ships, I’ve also spent money on something else. A very big something else. Watch this space...
Posted by Kieron at 07:53 9 comments:

Continuing in the spirit of finishing things off, I’ve completed almost all of the batch of Teenage Mutant Ninja Turtles miniatures I picked up just after Christmas.

The models are all Heroclix sculpts as most of the characters are fairly hard to find proxies for. Also, Heroclix, even if ordered from across the pond, are cheap as chips and, for the most part, decent models hidden under ropey paint jobs.
As such, I have simply tidied up the paint work on these four and thrown a wash over them.
Yes, I’m lazy. But I’m my opinion, it works.

Of the four, Splinter is probably the model I’m least happy with. This is mainly because, as ever, these photos jave down up some bits I’ve missed, such as the toes and trim of the robe which I’m going to have to revisit. However, it’s also a bit of an odd model.
I actually bought a Splinter proxy some time ago from TT Combat’s Rumbleslam range. Unfortunately, I’d never seen the miniatures in the flesh and, quite frankly, it is massive, about the size of a GW Black Orc.
There are actually plenty of alternatives for Splinter out there. Obviously there are probably Skaven options amongst the GW back catalogue, but I can’t be bothered tracking them down, Greebo Miniatures do a couple of excellent, if expensive, versions, and Mantic have a suspiciously Splinter-like coach amongst their Dreadball range.
However, for the moment I’ll simply tidy up the missed bits and be happy with what I have.

Rocksteady and Bebop, the Shredder’s loyal, if stupid, minions are quite characterful miniatures. If I have a complaint about these two, it’s the fact that they are small, my Turtles tower over them. However, in the 80’s cartoon, they weren’t big and they are only extras in the 7TV rules and so shouldn’t be too imposing as they won’t last long against the heroes in a half-shell.
Again, Greebo Miniatures do two impressive sculpts for Rocksteady and Bebop, and certainly Rocksteady is big enough to be given the large trait in 7TV. If I’m feeling flush at some point, I might place an order with Greebo, however, pricey models, shipping costs from Poland (I think) and the fact that my TMNT casts aren’t really in regular use, might mean that this will some time in the future.

The vigilante, Casey Jones, is the model that there are most potential alternatives for out there. Hockey-mask wearing thugs are quite popular and easy to find, however, seeing as I was buying the other, more specialist, models, I figured it wouldn’t hurt to spend another pound.
As it happens, Casey is probably the one of the four I’m most happy with and which required least tidying up.
And so both my Turtles and Foot Clan casts are complete...well, almost...
I have the Krang to consider. I still have a model for Warlord Krang to paint, however, I will probably wait until I have something to use as the Krang Droids...Necrons or Terminators (based to match my TMNT stuff) are probably most likely, I just need to work out a way to put Krang aliens in their bellies.
Posted by Kieron at 02:02 14 comments: