More adventures in Venice from Carnevale. This time we're down at the docks where the one that got away has come back for more. 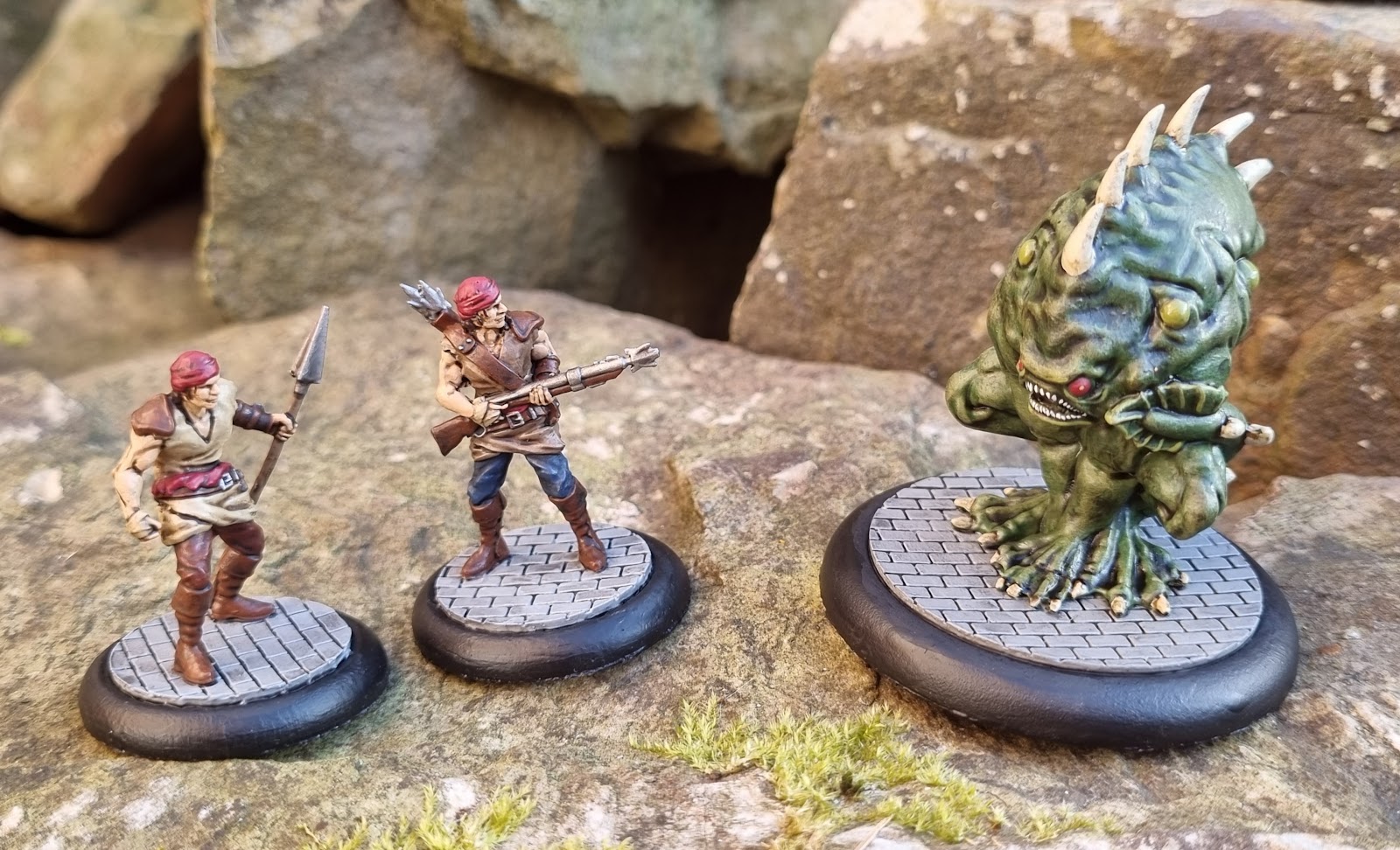 I've now moved on from painting Henchman models to the Hero models for the two forces that come in the starter box.
For the Guild it's a couple of Fishermen, who will add some sturdier combat prowess and better weaponary than the regular Citizens.
They're going to need it too, as the Rashaar are being reinforced by a hulking Raadru, which will take some stopping. 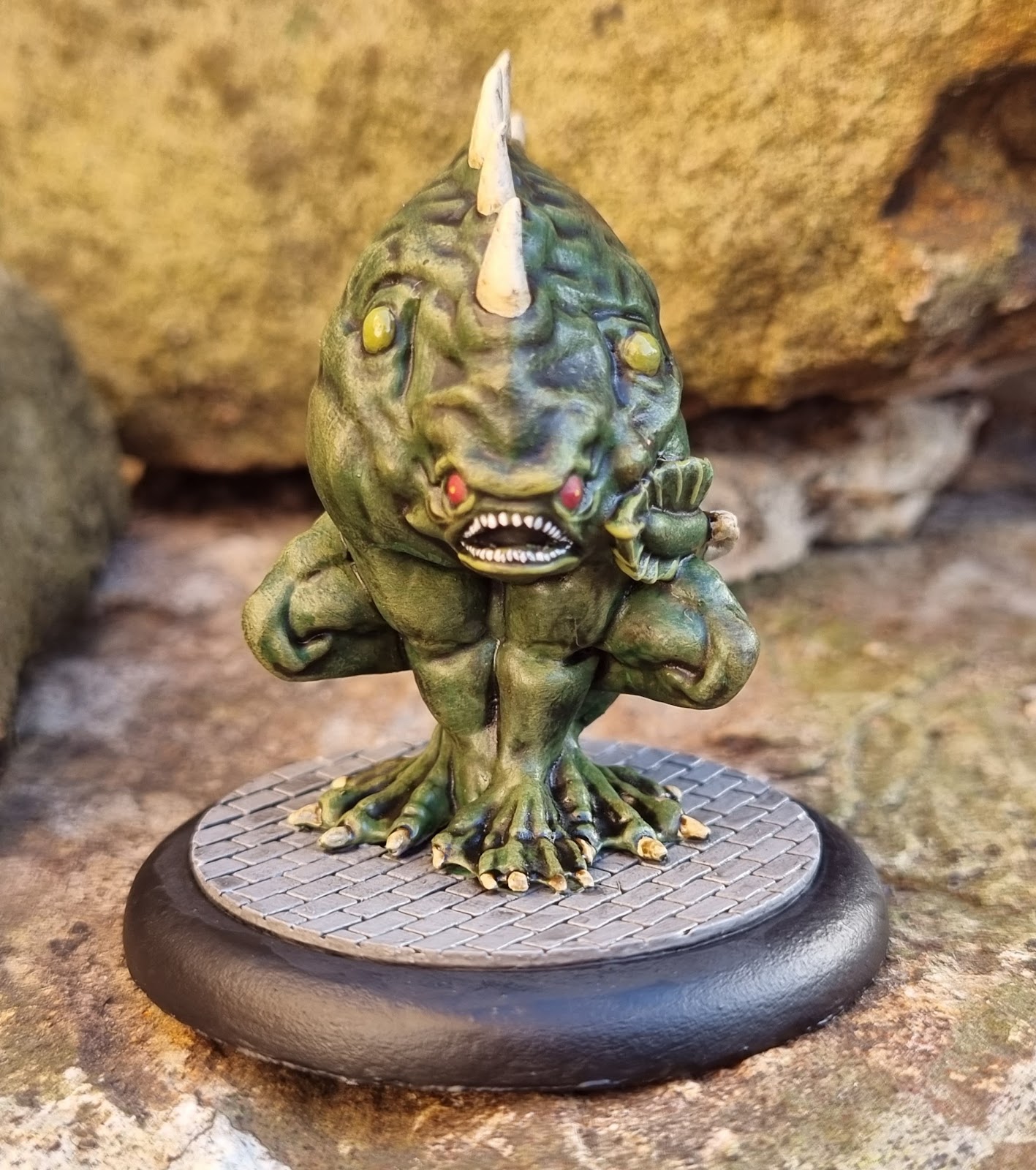 The Raadru is a great model and really straightforward to paint. I used the same process as with the Lesser Ugdru; although the bulbous growths on its back were done with Nurgle's Rot technical paint).
Due to the compact pose, with the tail wrapped close to the body (which I suppose is to ease the process of a one piece casting), painting this model was a quick and satisfying job. 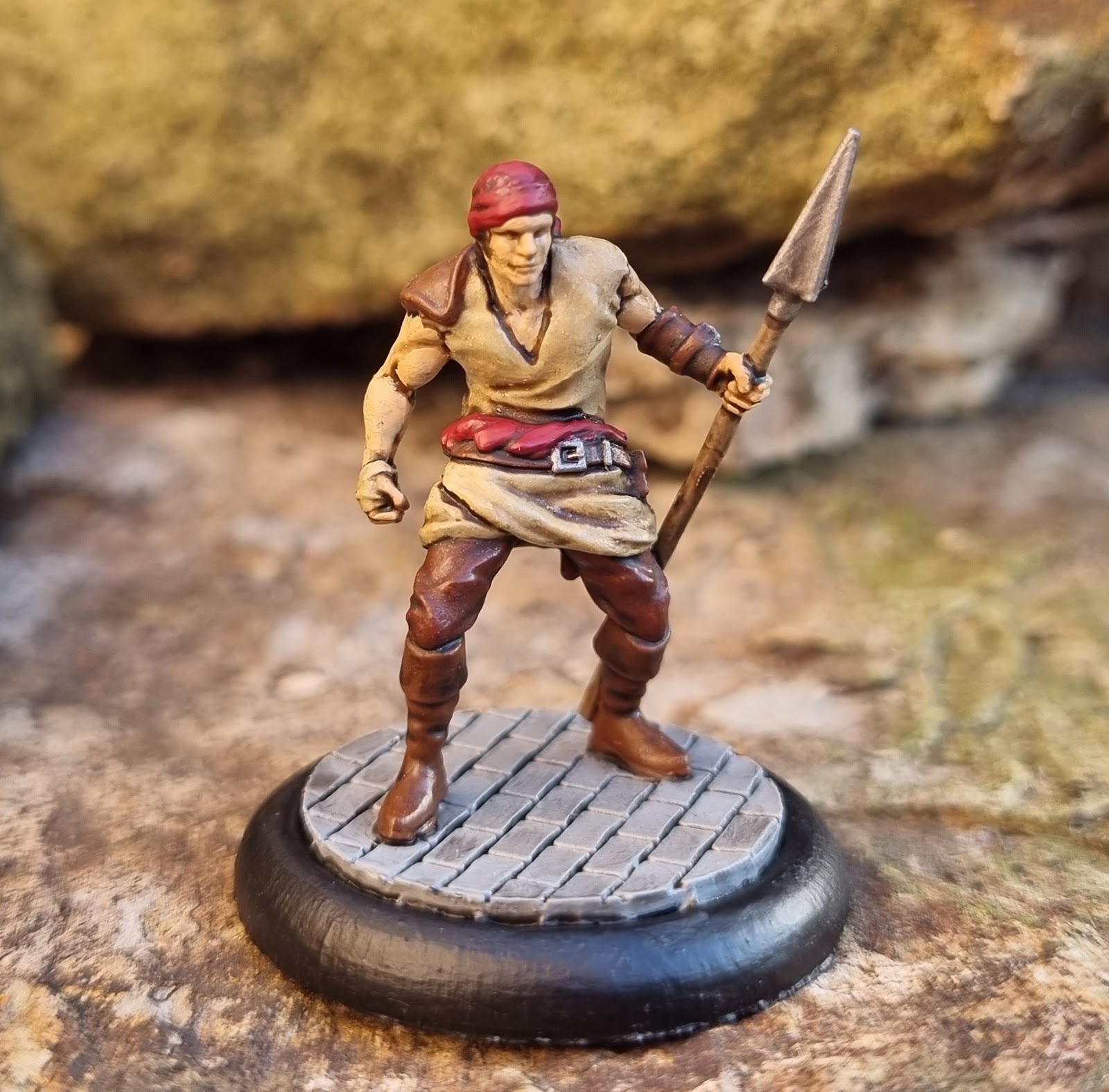 Somewhat less satisfying are the Fishermen. They seem to be much more fiddly sculpts than anything else in the box, with skender features and less well defined details. They even seem slightly smaller than the Citizens, which seems odd given that these are meant to be the more physical characters. 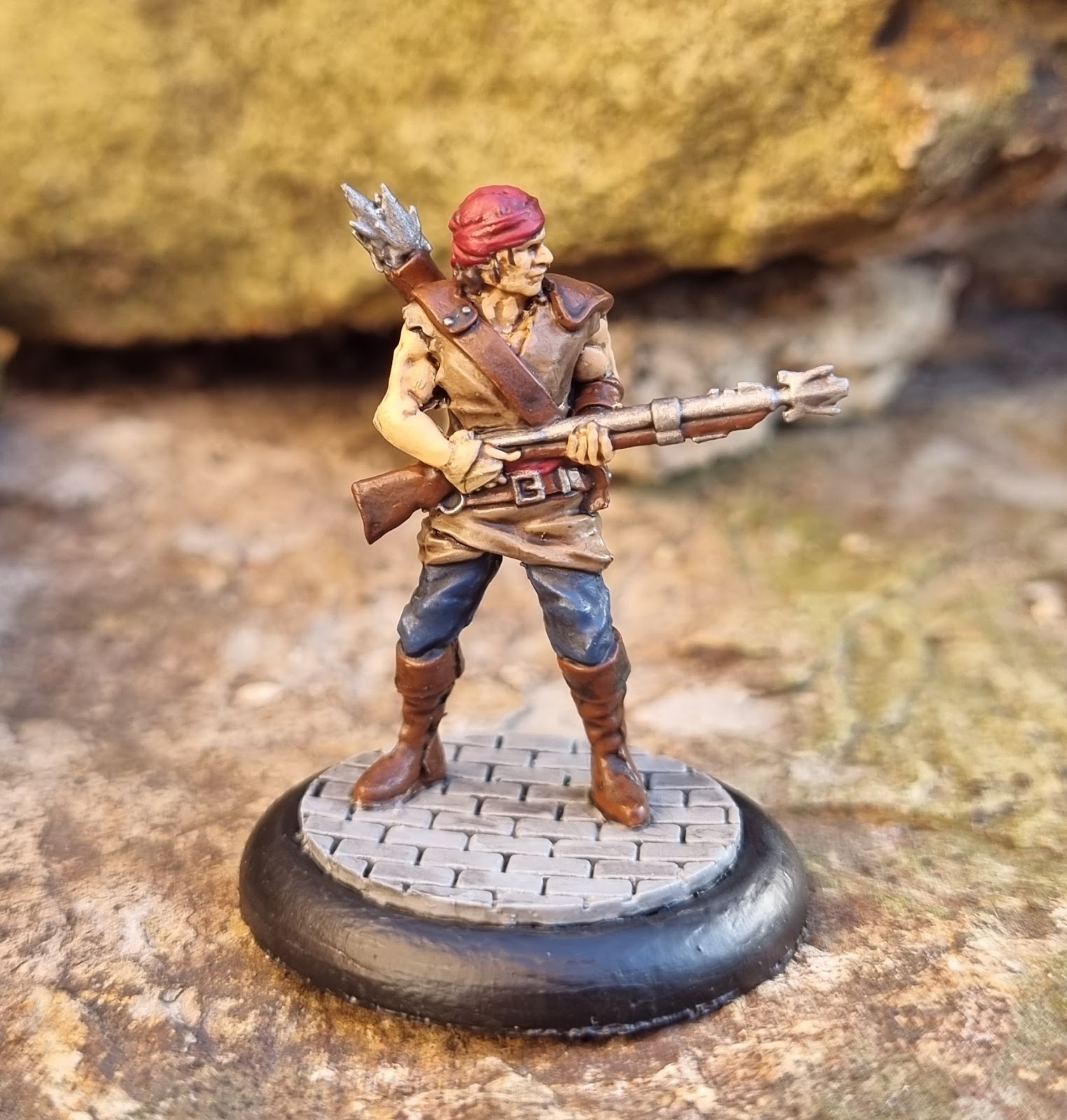 Added to this, the Fisherman with the harpoon had significant mould lines down his arms and legs. I've done my best to tidy him up but these two are definitely not my favourites.
They weirdly feel like they are from a different miniatures line. The painting tally continues to head into the black with only two miniatures left to paint.
I really need to get some games played.
Acquired: 48
Painted: 63
Posted by Kieron at 11:40 5 comments:

Pushing The Boat Out

Having just finished another small batch of miniatures for Carnevale, I now really want an ice-cream.
I can't think why.

This represents the last miniatures that needed painting before I can start playing the first few scenarios from the introductory campaign that came in the starter set.
This will allow me to start playing and get the remaining miniatures painted in time for when I need them. 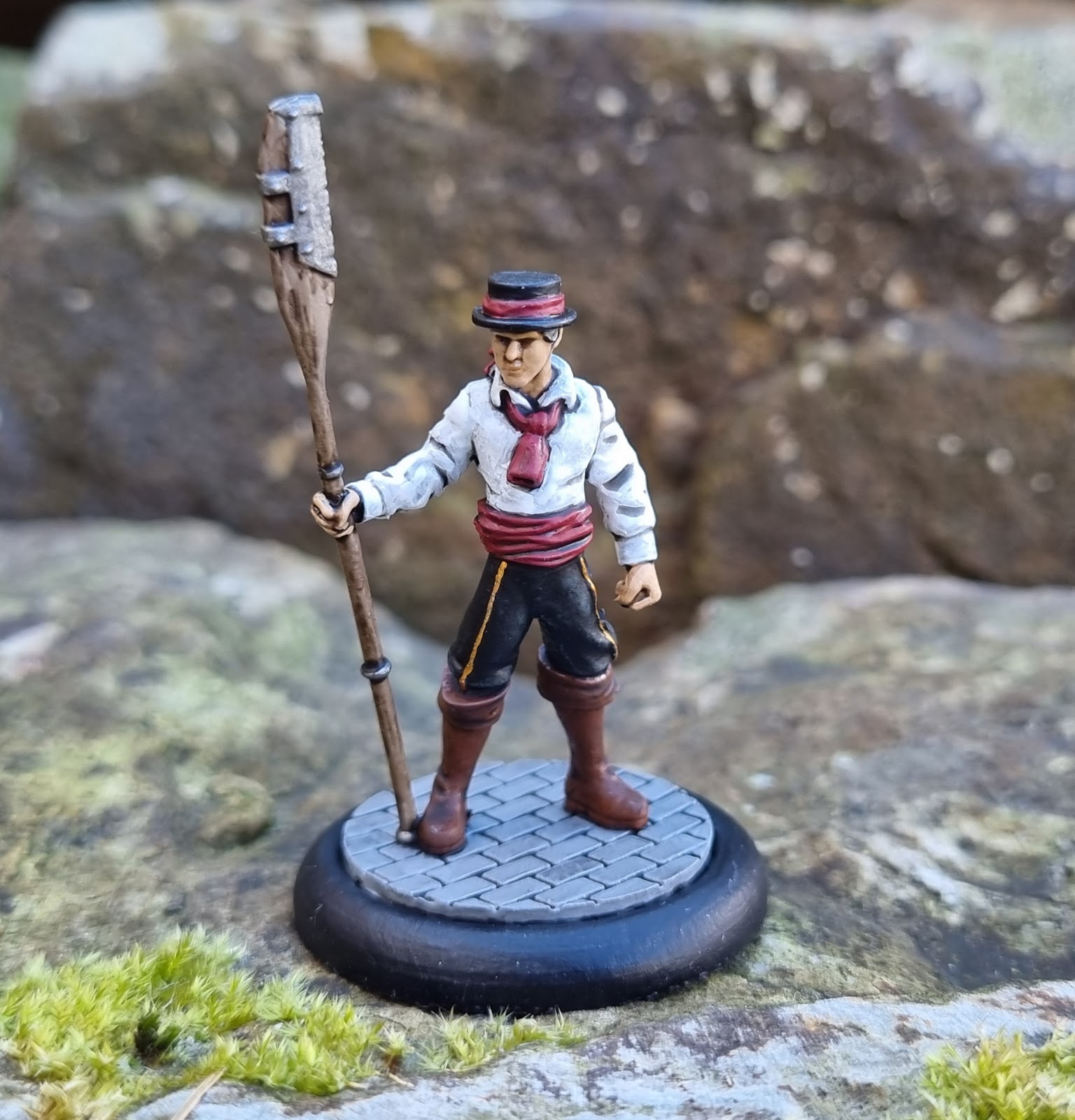 The Gondolier is arguably the Guild's getaway driver, able to get more speed out of a Gondola than other characters, and so transport fellow Guild members quickly to their objectives.
Armed with a bladed oar, he's also no slouch when it comes to dealing with the dangers that lurk in the canals.

The Gondola is a great piece of resin terrain which comes in three main pieces (which you can see as I could have hidden the joins a little better). It's a really nicely detailed kit which went together very well after a tiny bit of cleaning up.
In game Gondolas function as interactive terrain. I believe they can be included in a roster as equipment, but I think they can also just be put on the table to capture the flavour of Venice, in fact some scenarios require them. 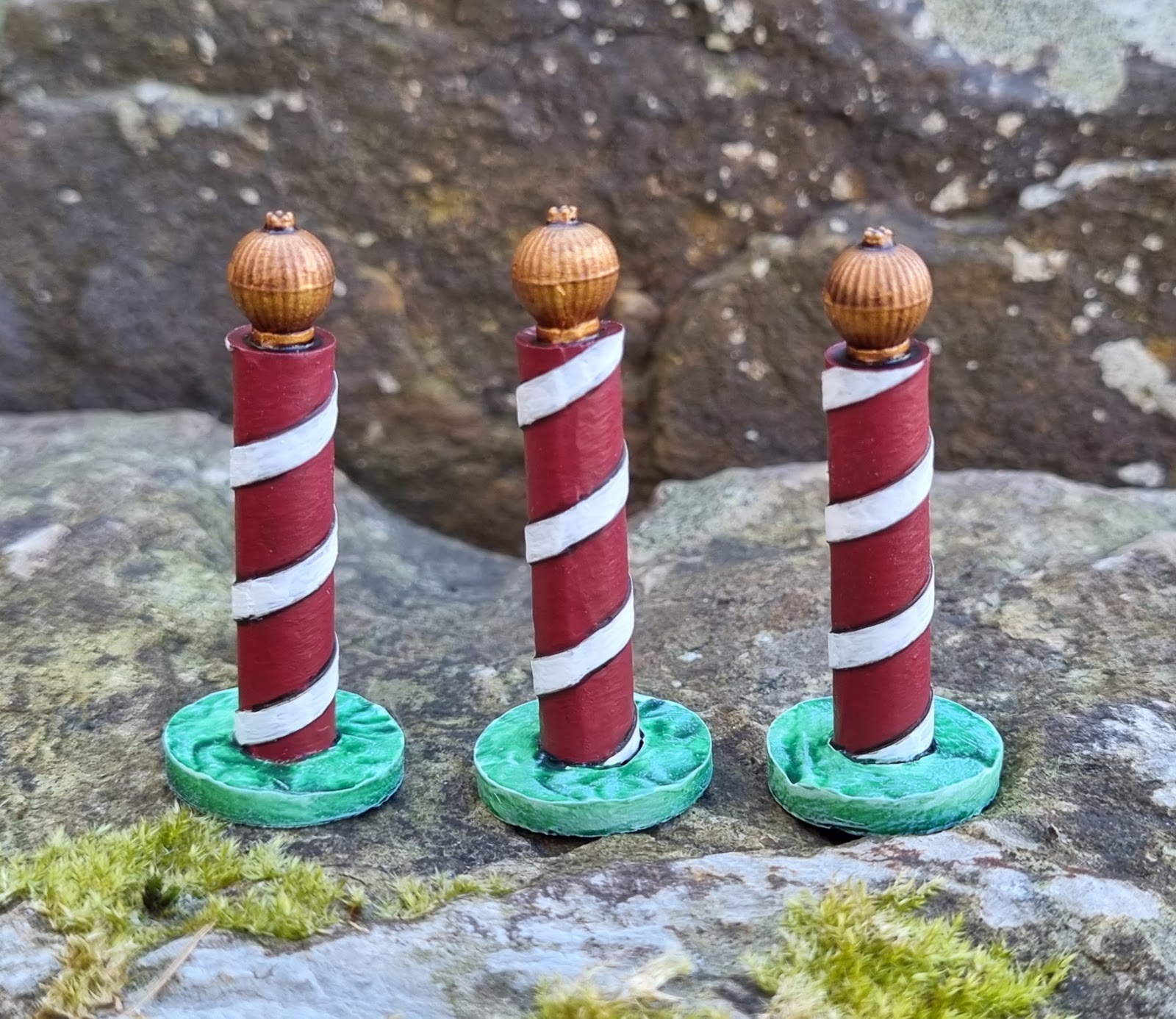 I'm trusting the Internet when I say that these colourful mooring poles are called 'paline' (this may be wrong). The different colours represent different noble houses that own particular areas of Venice.
Despite being very flavourful, they are my least favourite miniatures of the starter set. Not only do they have rather bulky, unless bases (done that brightly to match the water on the gaming mat), but also that casting was a bit shonky with quite chunky mould lines. I did my best to remove them, but the stripes ended up a little warped.
They're okay, but I may look into replacing them with an alternative at a later date. 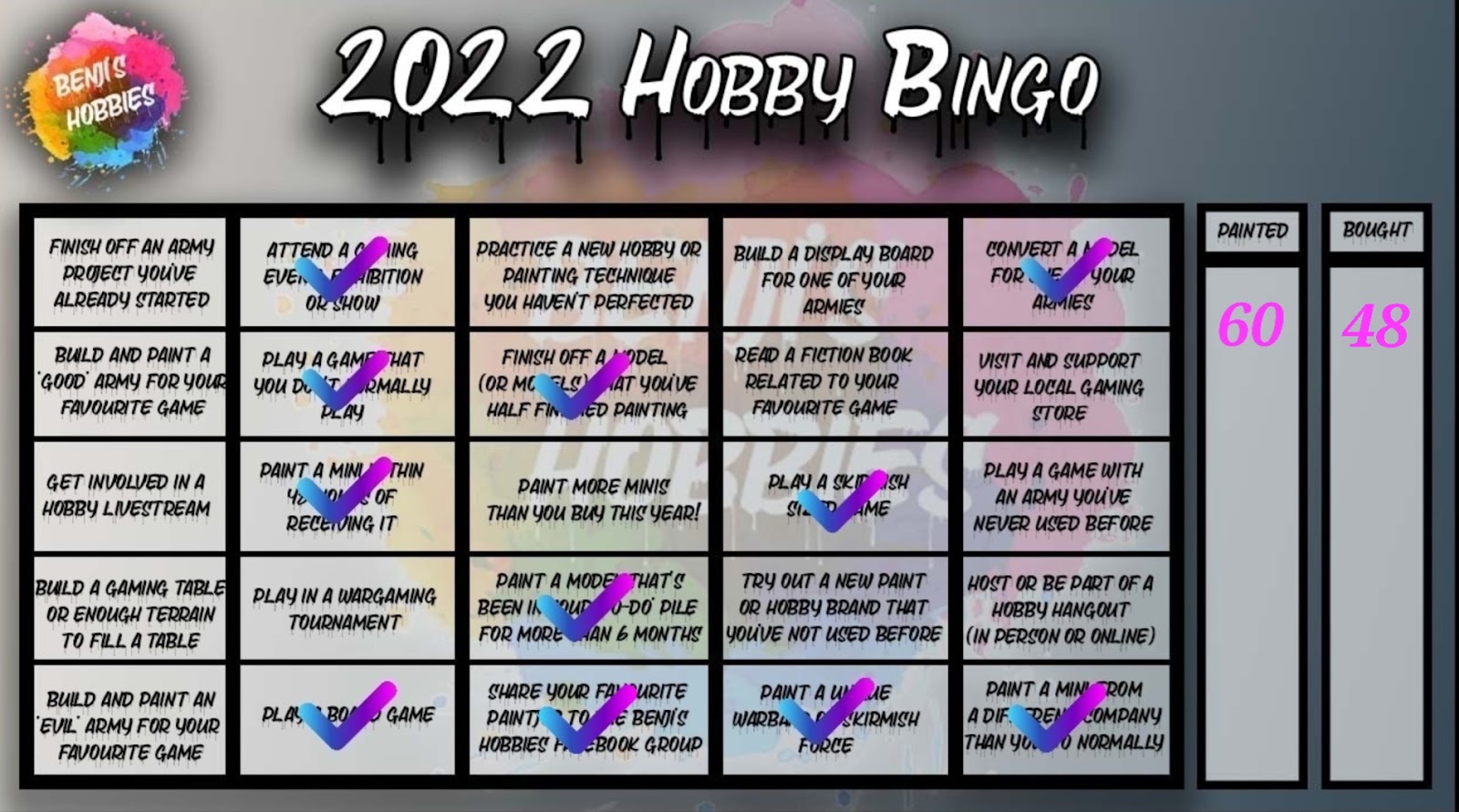 Five more painted, without purchase and not much left of the starter set to go. I think next up is either a bridge or the somewhat bigger hitters of the two gangs.
Acquired: 48
Painted: 60
Posted by Kieron at 05:44 2 comments:

Having completed the Rashaar forces needed for the first few intro scenarios of Carnevale, I've turned my attention to their opponents: the Guild.
Combining some the worst qualities of trade unions and organised crime, the Guild are the closest thing Carnevale has to 'good guys' and features a mixture of tradesmen, prostitutes, thieves and ordinary citizens simply paying their dues. 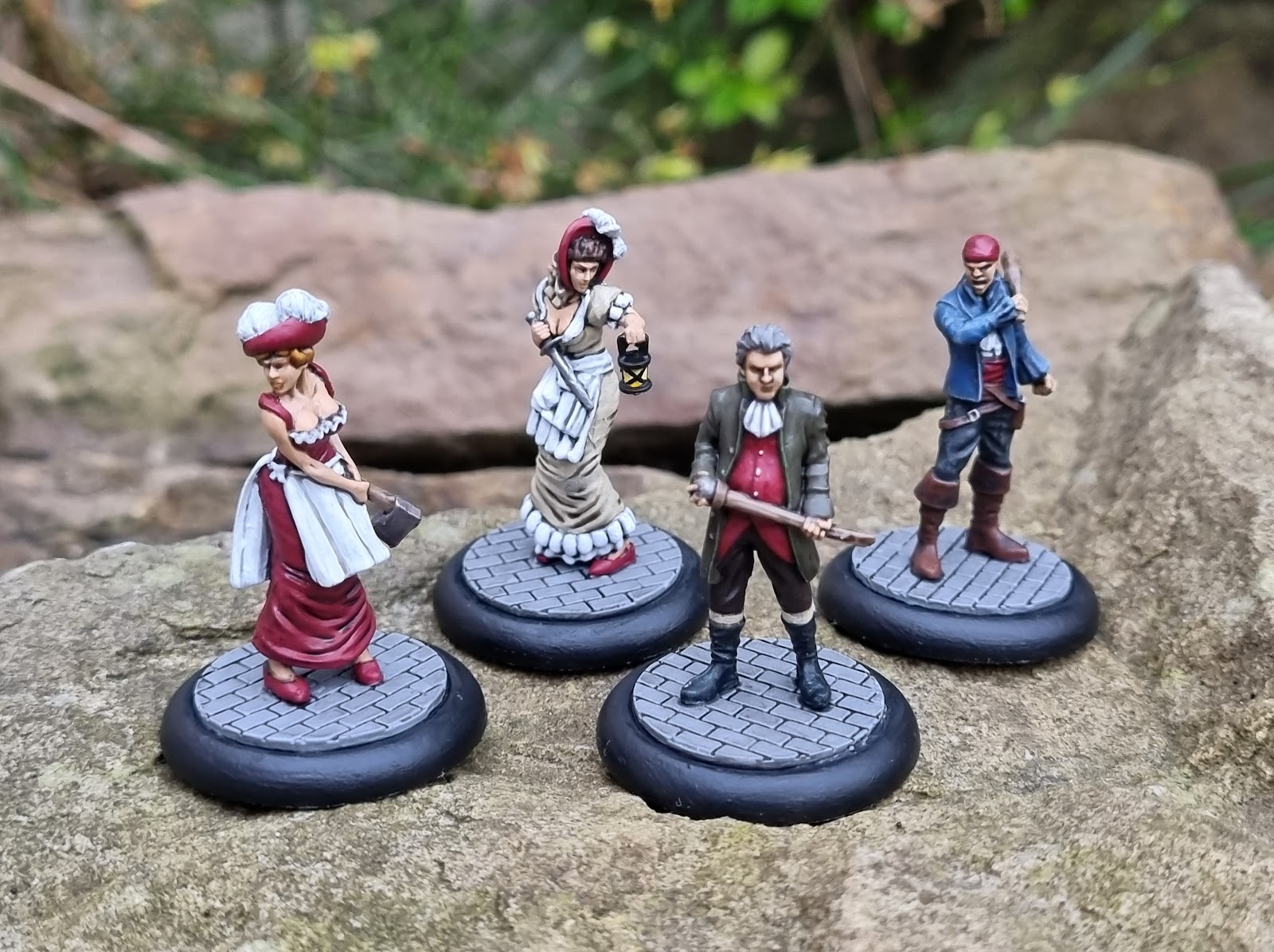 These four are some of those Citizens. They make up the bulk of the Guild's numbers and aren't particularly proficient at anything. However, the power of collective bargaining does mean that they are better in large numbers. 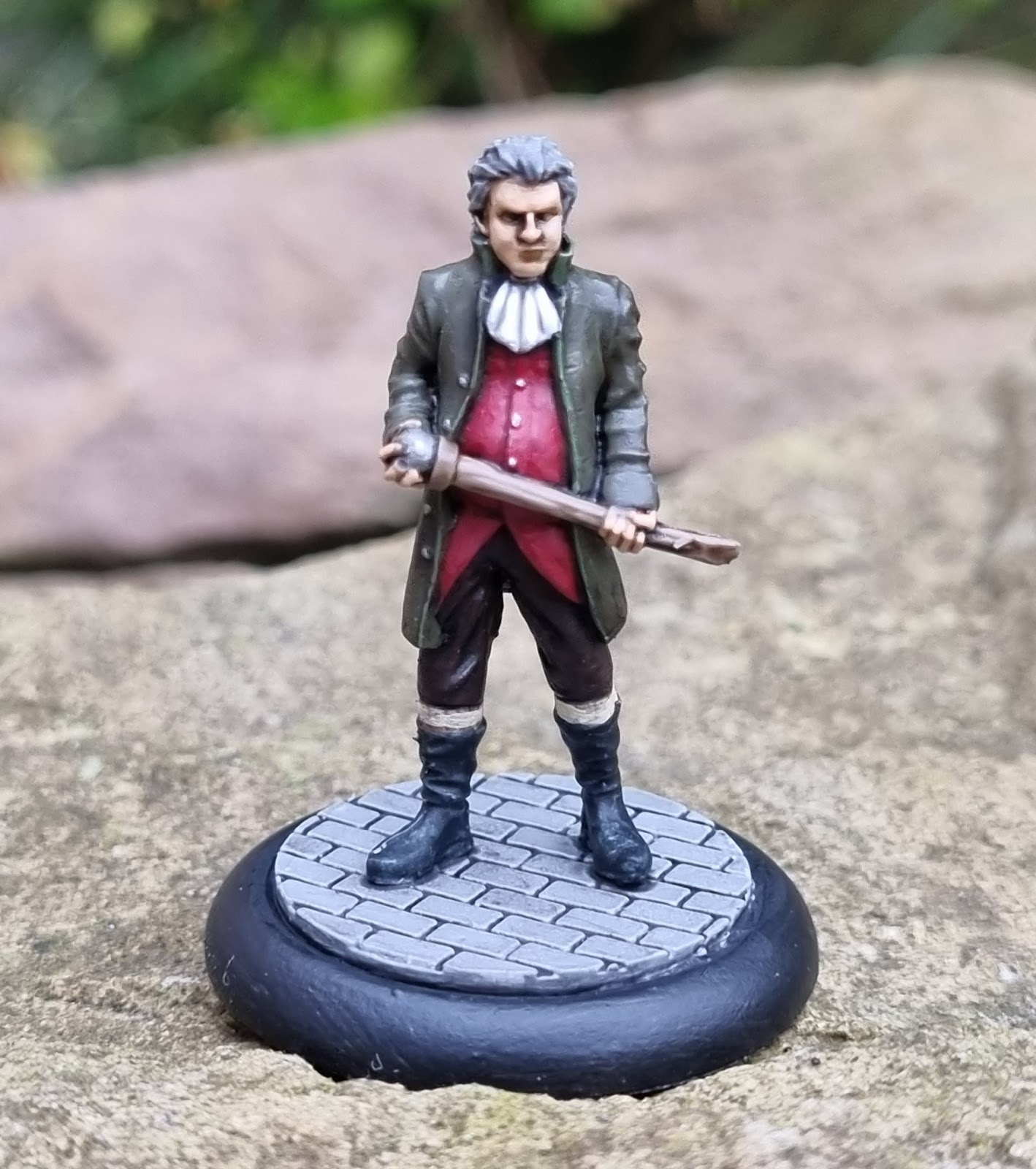 In terms of painting, I've tried to use a muted palette, reflecting the fact that these citizens can't necessarily afford the finest cloth. This means that should I end up painting some Patricians (the nobility) I can distinguish them by using a contrasting bright palette. 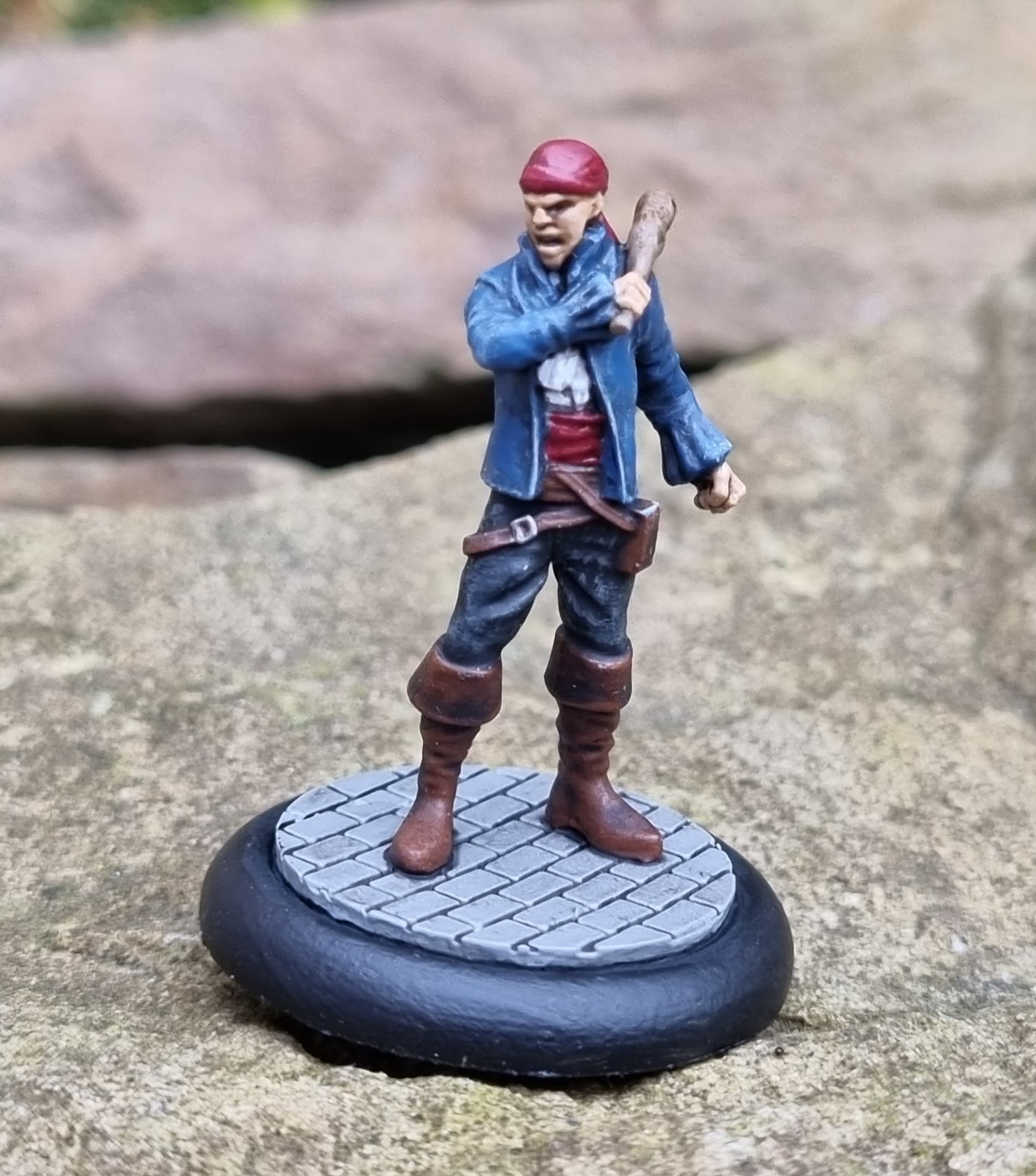 I have, however, made sure that each model has some items of dark red on them. Not only dies this tie them together visually, but it would also make sense that when called on to fight for the Guild, there's something identifying who is on their side. 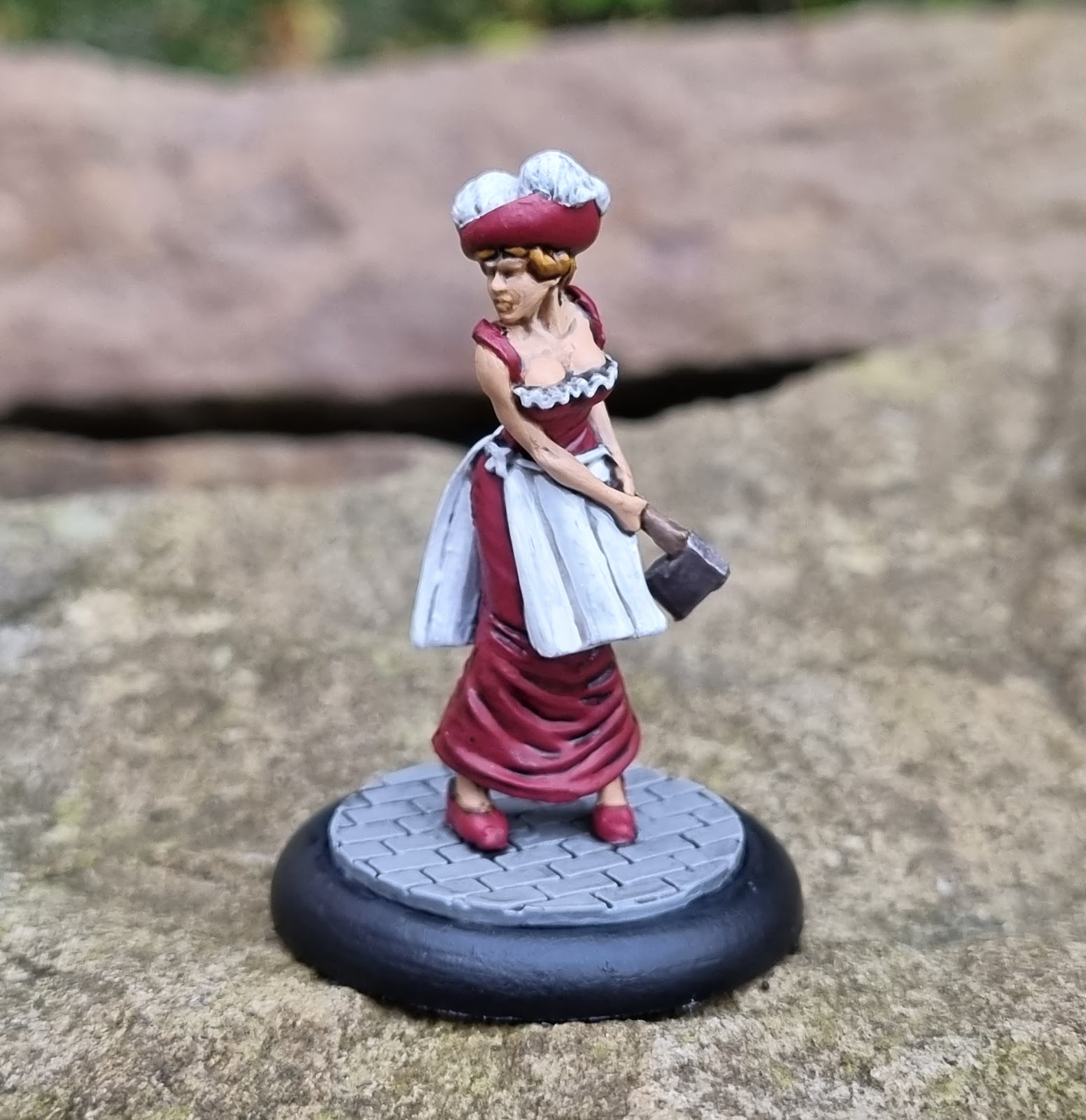 These four models took more cleaning up than the Rashaar models, which I suspect is due to them having more fiddly features. I've learned that I need to use a very sharp knife if I don't want to butcher the resin. 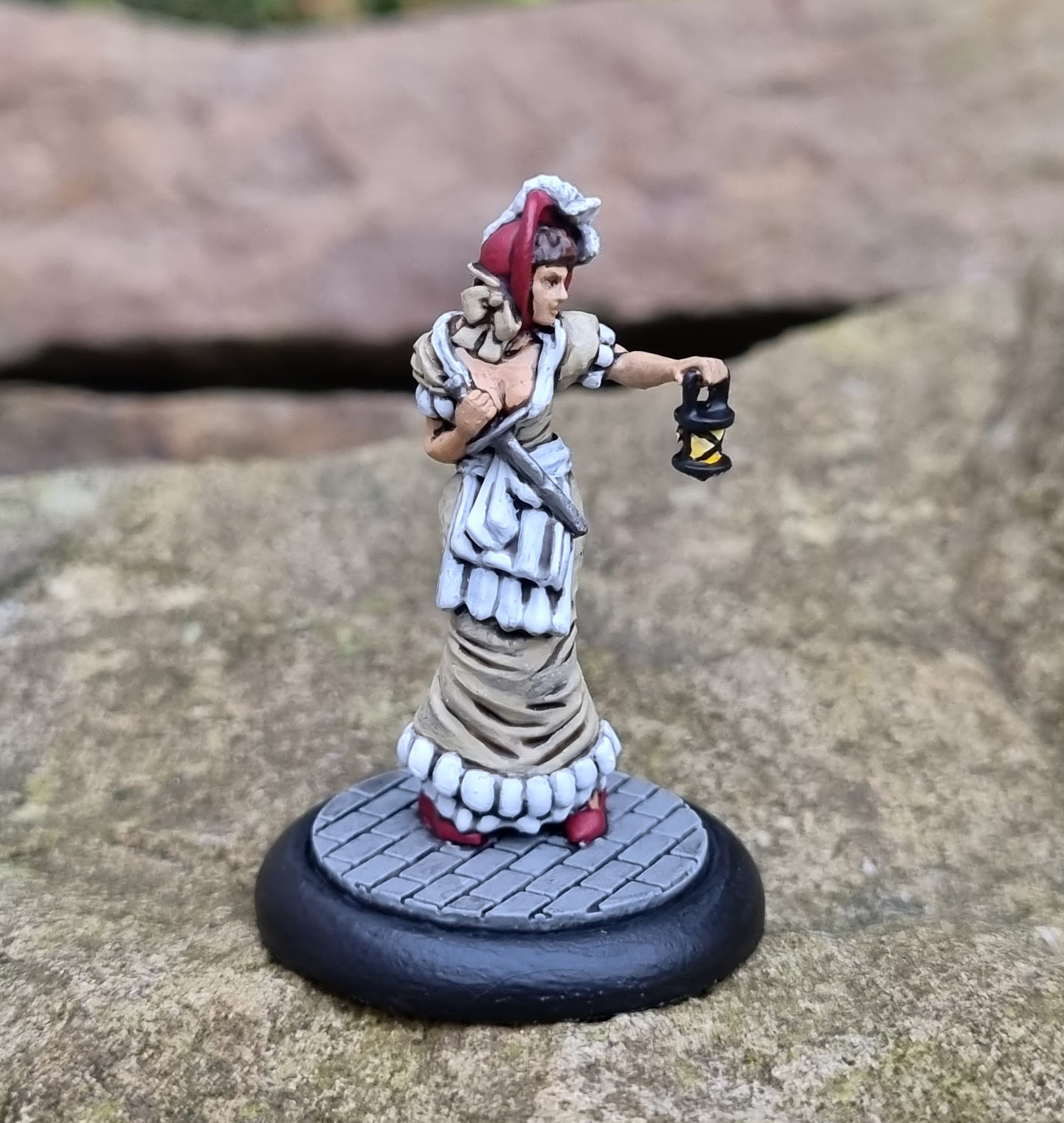 I'm also aware of how cartoony my painting has become, probably after painting so many superheroes and Masters of the Universe miniatures. I've also opted to not bother with picking out the eyes as more truescale miniatures like these often look better without it. 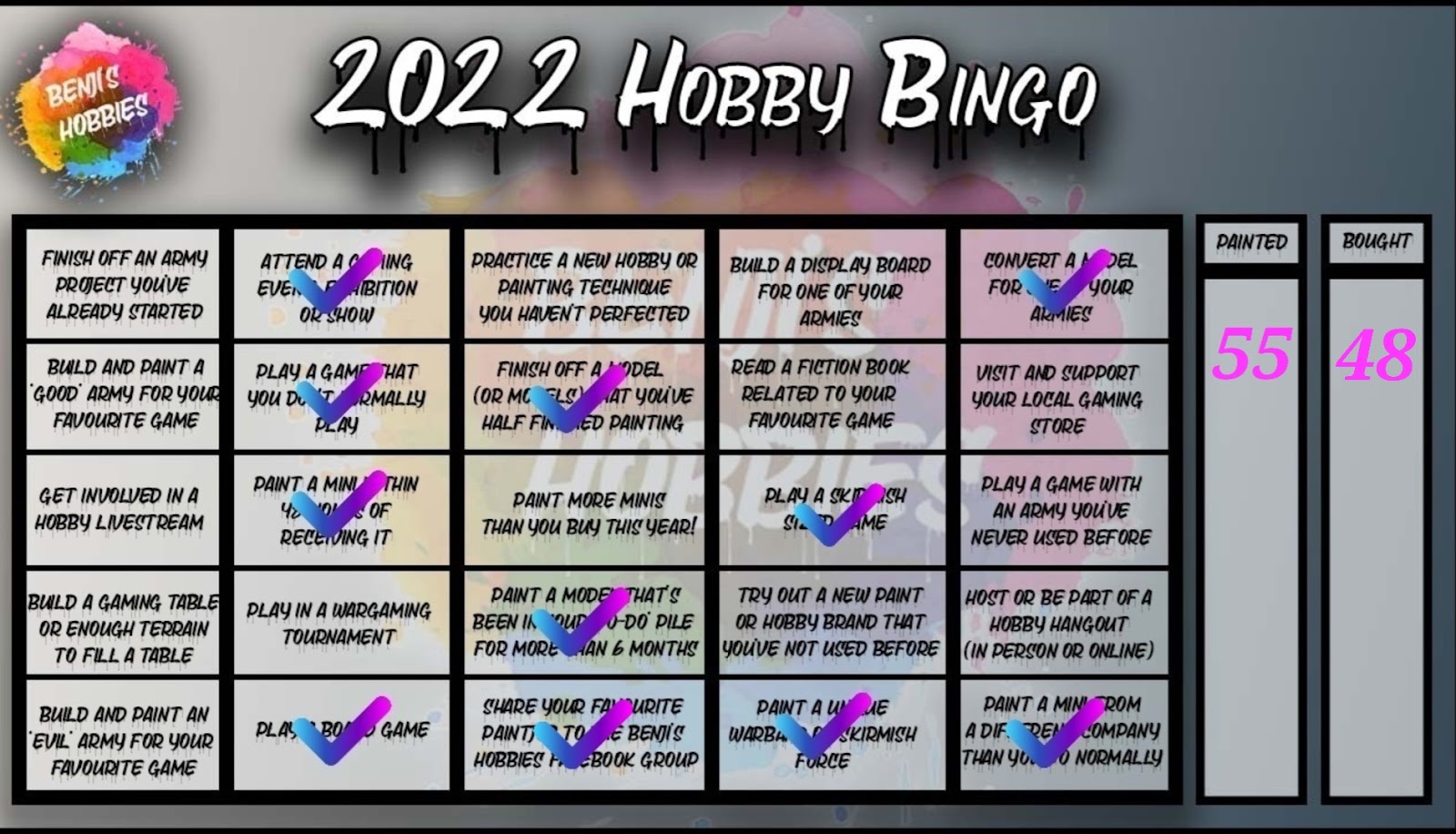 There's only the Gondolier and a Gondola to paint before I can get on with the first few scenarios, at which point I definitely feel that this alternate version of Venich will begin to come to life.
Acquired: 48
Painted: 55
Posted by Kieron at 00:34 6 comments:

Continuing my adventures along the canals of Venice, I've painted two Lesser Ugdru from the Rashaar force from the Carnevale starter set. 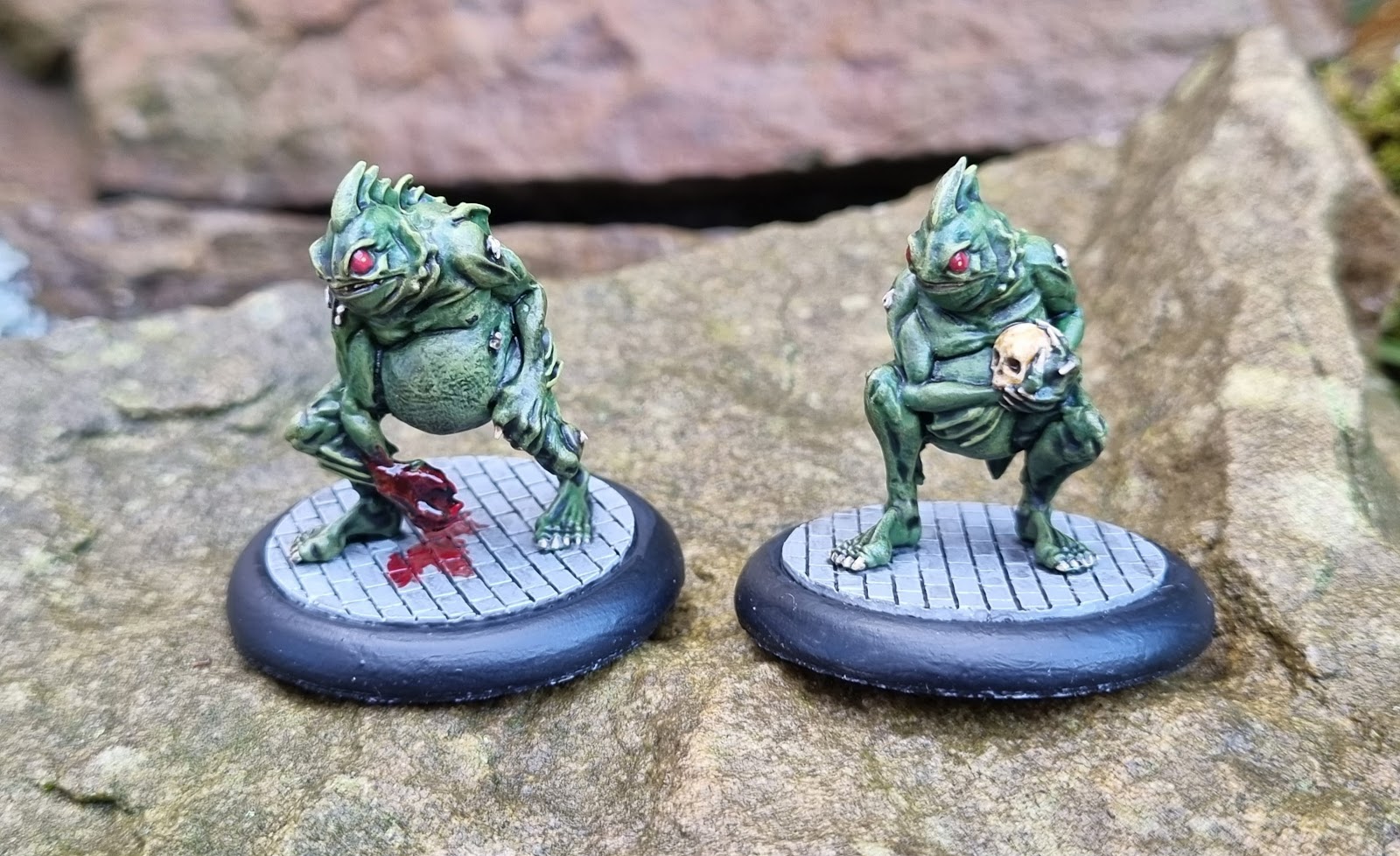 Emerging from the depths to drag Ventians to a watery grave (or worse), the Lesser Ugdru are clearly heavily inspired by H.P. Lovecraft's Deep One's from The Shadow Over Innesmouth.
Strongly, my recent gaming tastes (7TV: Lurkers from the Deep, Arkham Horror and Carnevale) have all leaned heavily into this particular short story. 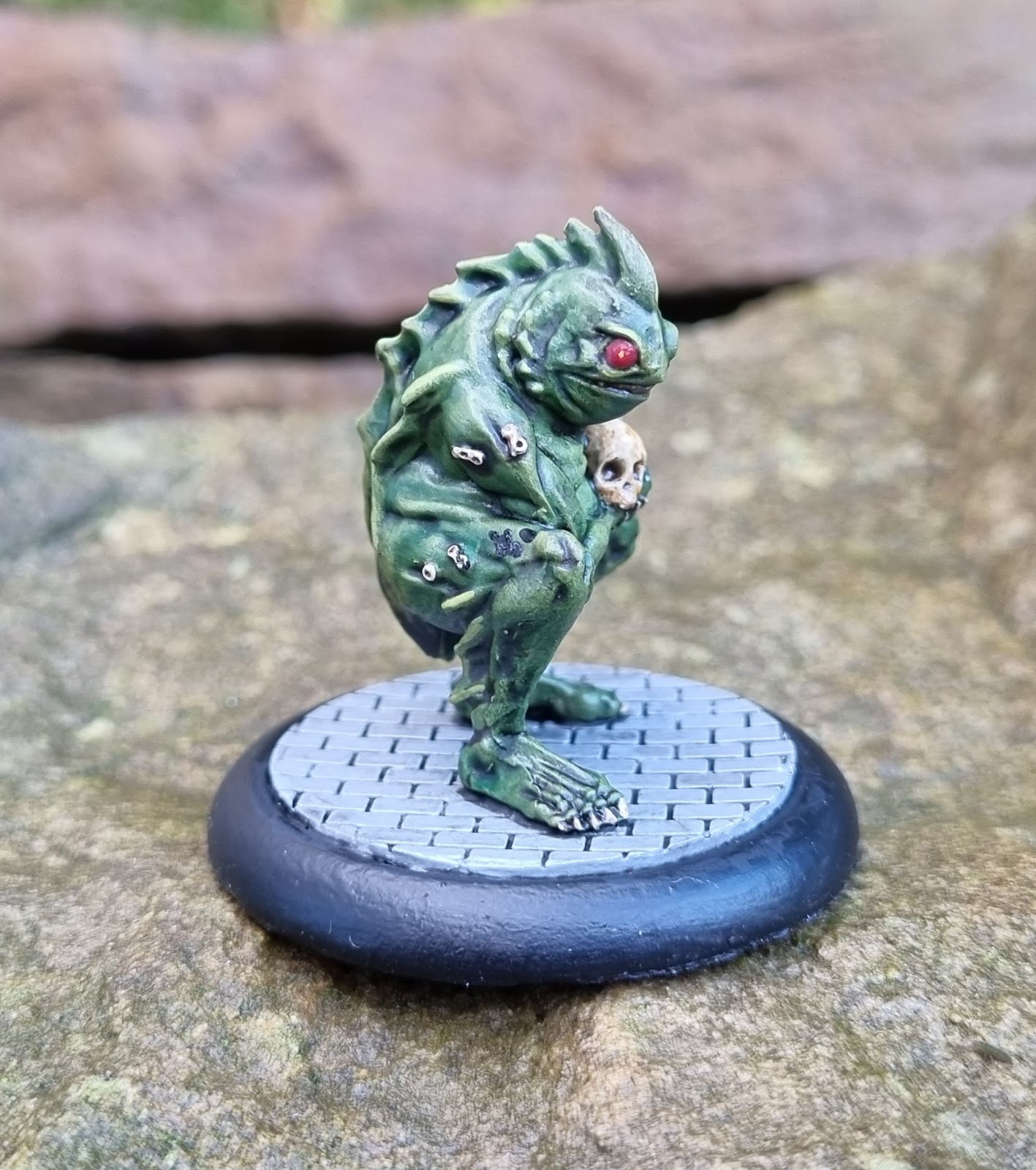 When it came to painting, I went with a Loren Forest base, a wash of Biel-Tan Green, a drybrush of Elysian Green, a wash of Agrax Earthshade, and then finally a highlight with Elysian Green.
After pondering different approaches to the eyes, I opted for my fairly standard evil monster approach of red with a yellow pupil. 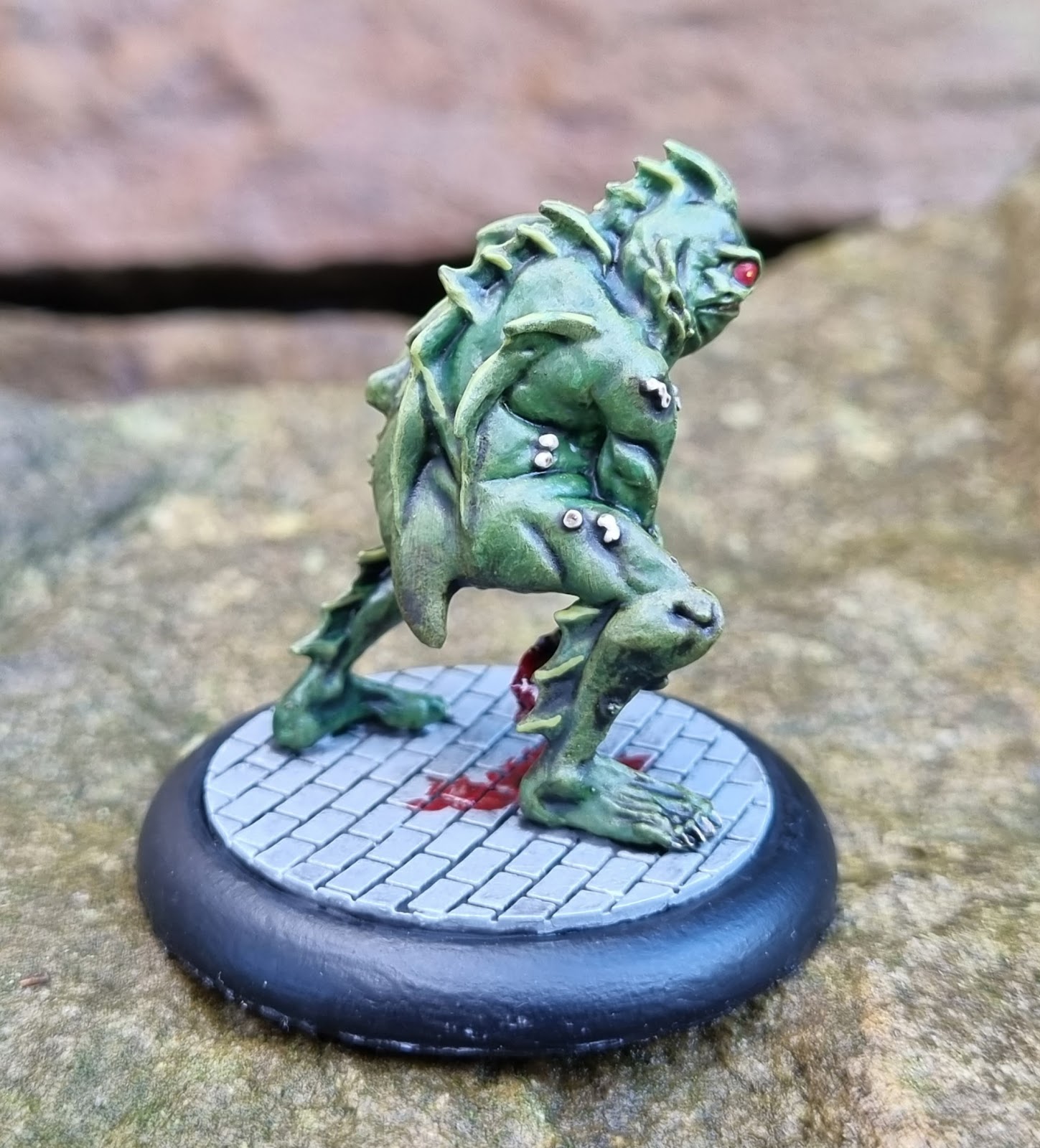 The sculpts are really characterful with crisp details, but the resin takes a fair amount of cleaning up.
I actually based this one before noticing that I'd missed a lump of resin in palm of the lower hand. As I couldn't get at it to tidy it up, I opted to paint it red and slather the area in Blood technical paint to make it a lump of flesh ripped from a fresh victim.

Here's my Rashaar force so far (a slightly better lit photo of the slaves). I still have the group leader, the Magi-Rashaar, and the hulking Raadru to paint. However, as these don't turn up in the initial how-to-play scenarios, I will be switching my attention to the common folk of Venice working for the Guild. 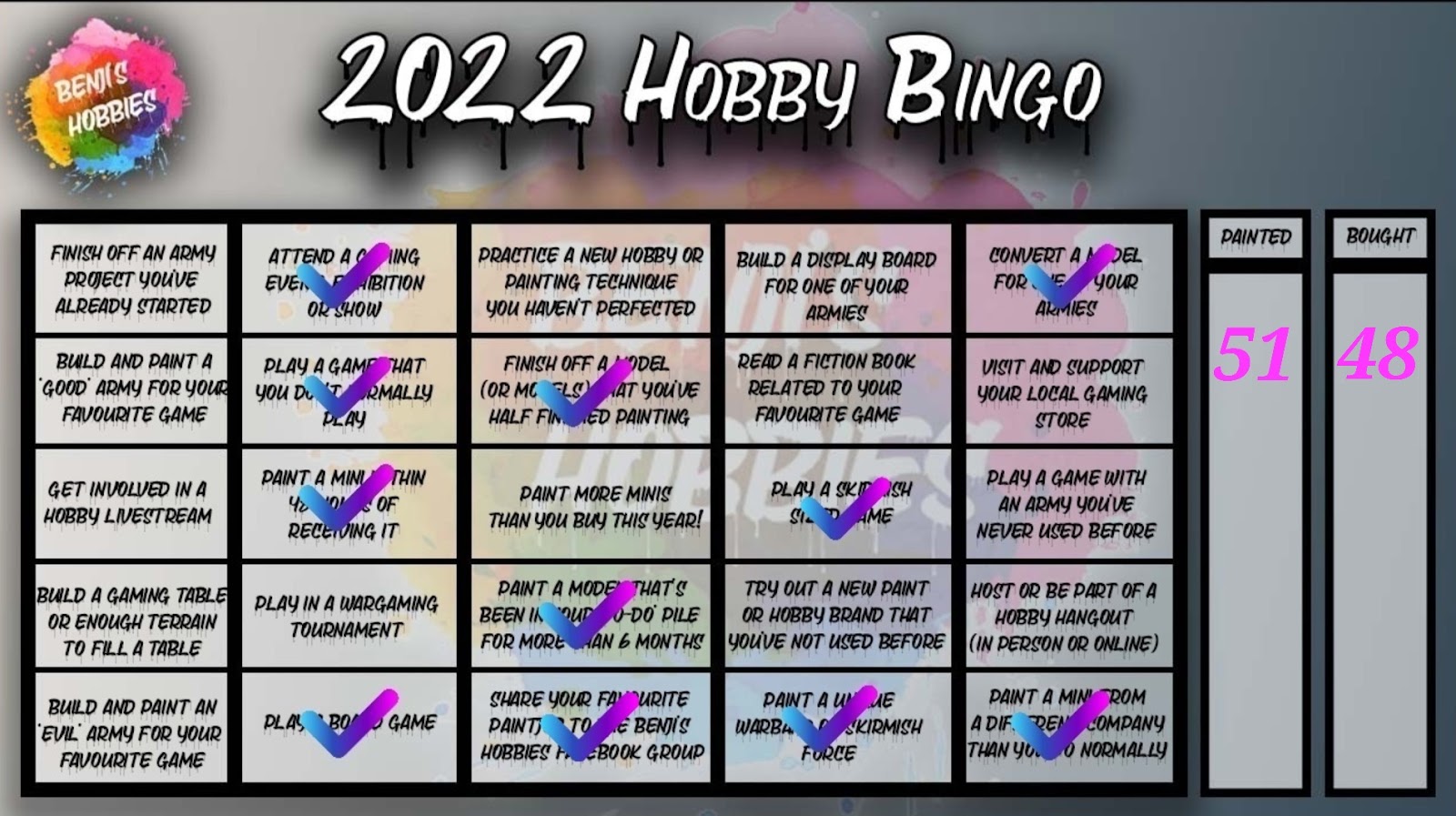 In hobby bingo terms I've been able to tick off another box, but it's nothing to do with the Ugdru. It had to do with this guy that you've probably seen a few times before. 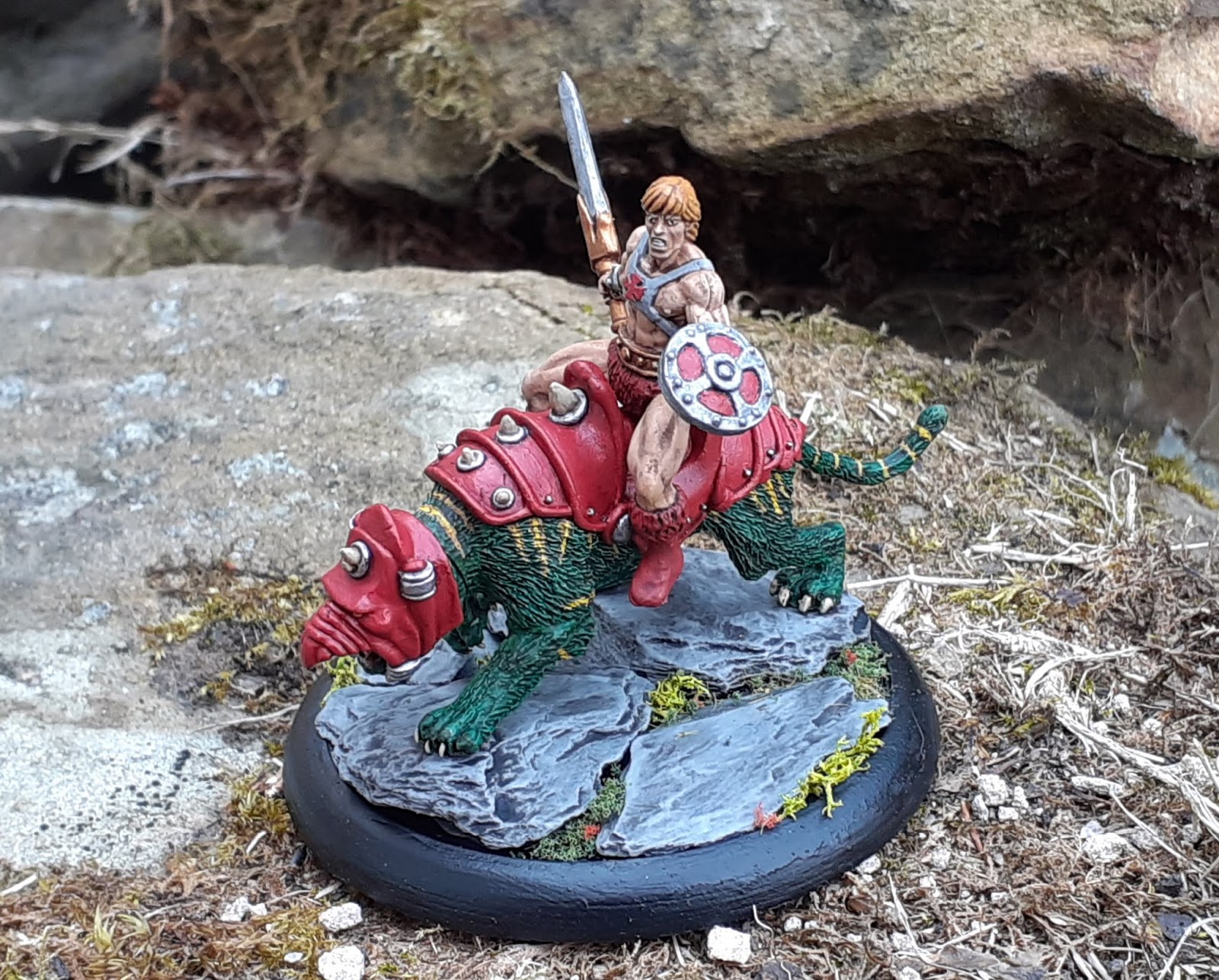 I shared it to the Benji's Hobbies Facebook page as my favourite paint job. I'm not sure it's my most technically advanced painting (I was probably more experimental with the skin of the Ugdru), however a clean and neat approach to an excellent sculpt combined with a heavy dose of nostalgia definitely makes it my favourite.
Acquired: 51
Painted: 48
Posted by Kieron at 00:56 3 comments: 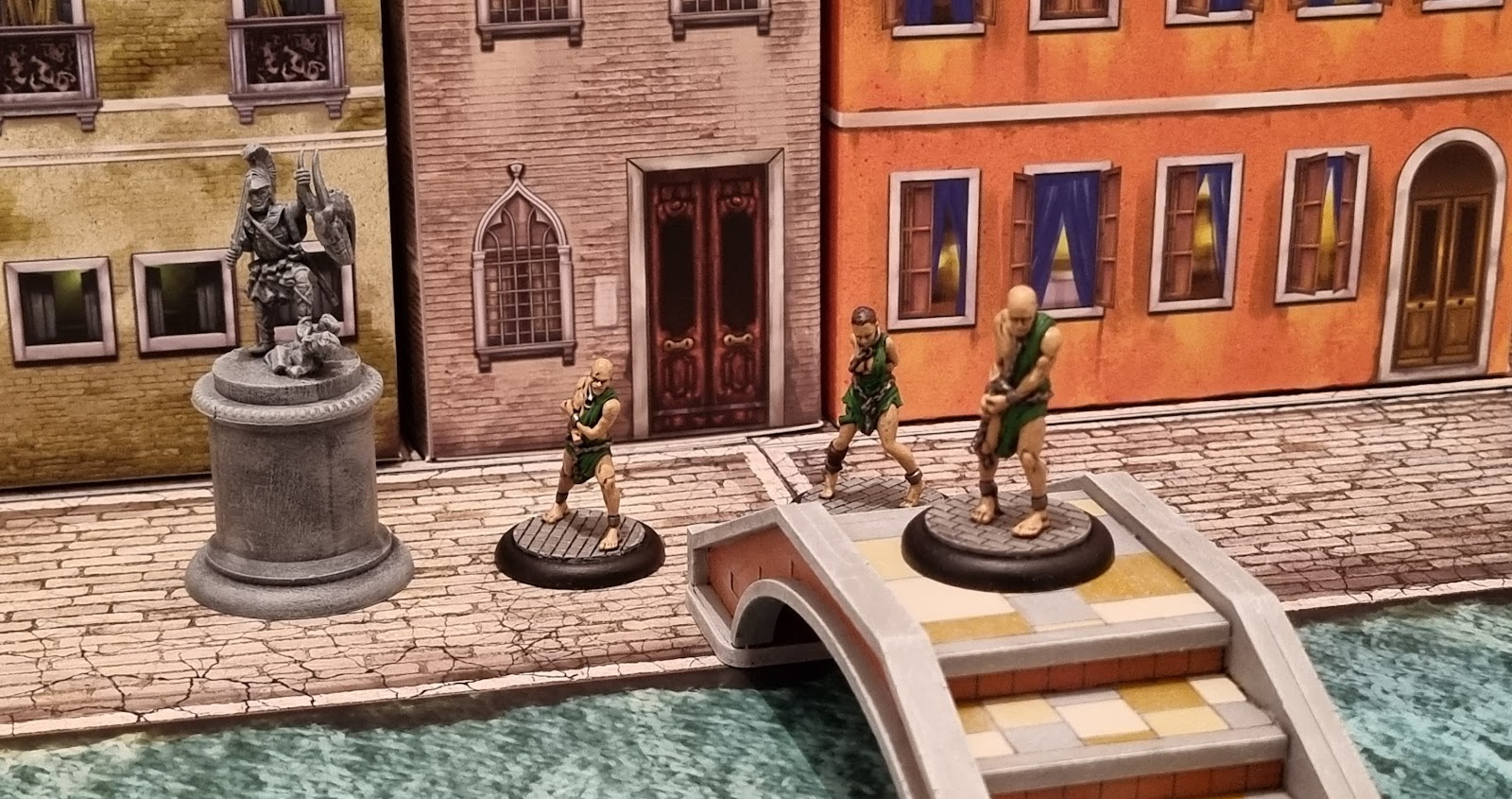 As mentioned in my last post, my normally steely resolve has slipped and I've bought into a new game system: Carnevale by TTCombat.
I bought the bigger of the two starter boxes, which came rammed with rulebooks, counters, dice, two gangs, reversible tiles to represent canals, a bunch of cardboard terrain and even a freakin' gondola!
I also bought some resin bases, along with four mdf bridges because the 2D cardboard ones look weird. 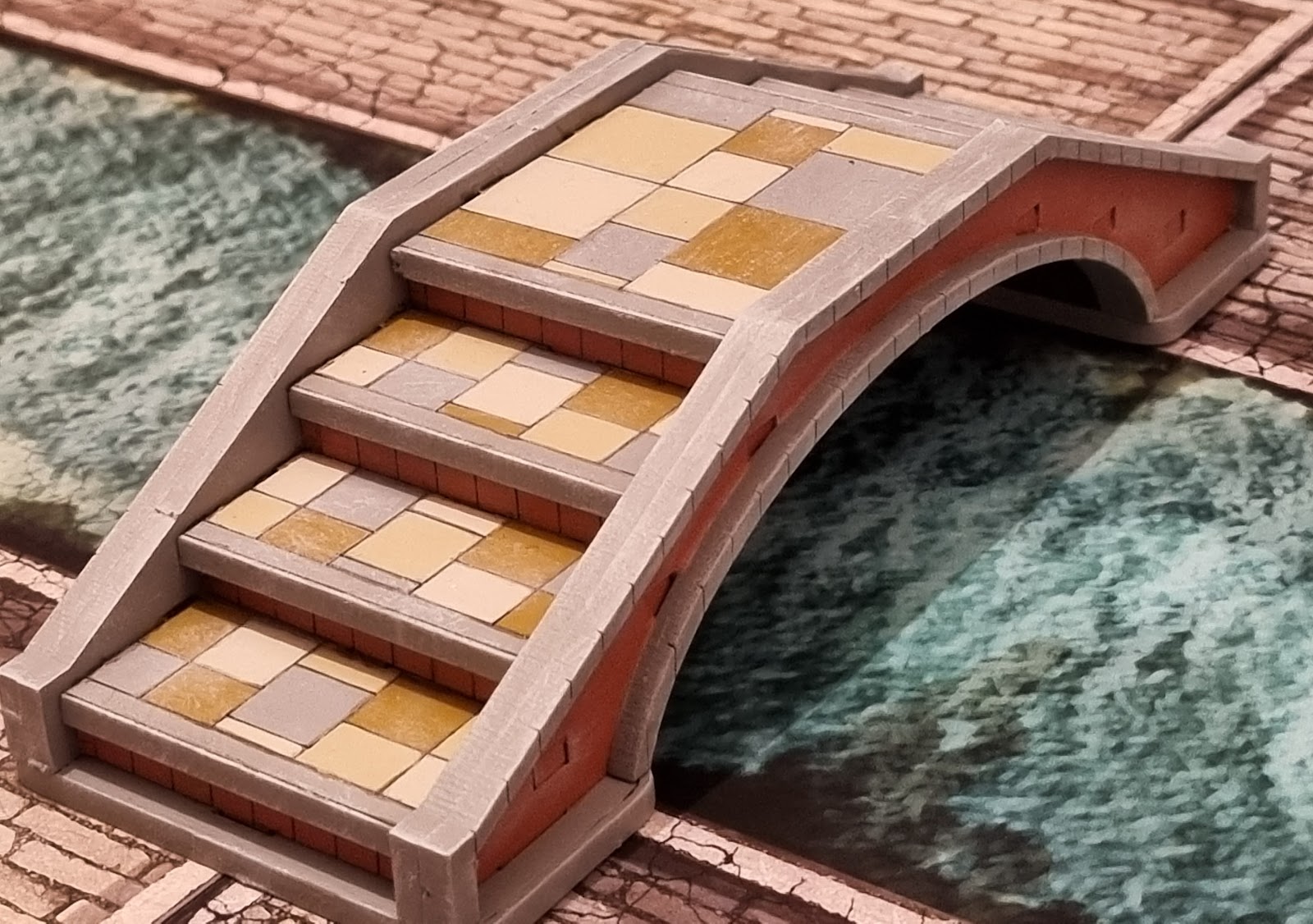 This is the first of three 'stretto' which I bought along with a more fancy 'Ringhiera' bridge. I've only painted one so far as that's all that's needed for early scenarios, and I also wanted to get on with painting the miniatures.
I've not painted MDF for a while, so it took a bit of time puzzling out how I was going to approach it. I've gone for a brighter, more cartoon style (outlining the paving slabs) as that seems to be where I'm at my most comfortable these days, as opposed to dark and grimy.
I'm actually quite happy with the almost patchwork design I went for on the slabs. So much so that in my head this shall be forever know as St Elmer's Bridge.
I'll go for a slightly different design for each Stretto bridge to prevent things being too uniform. 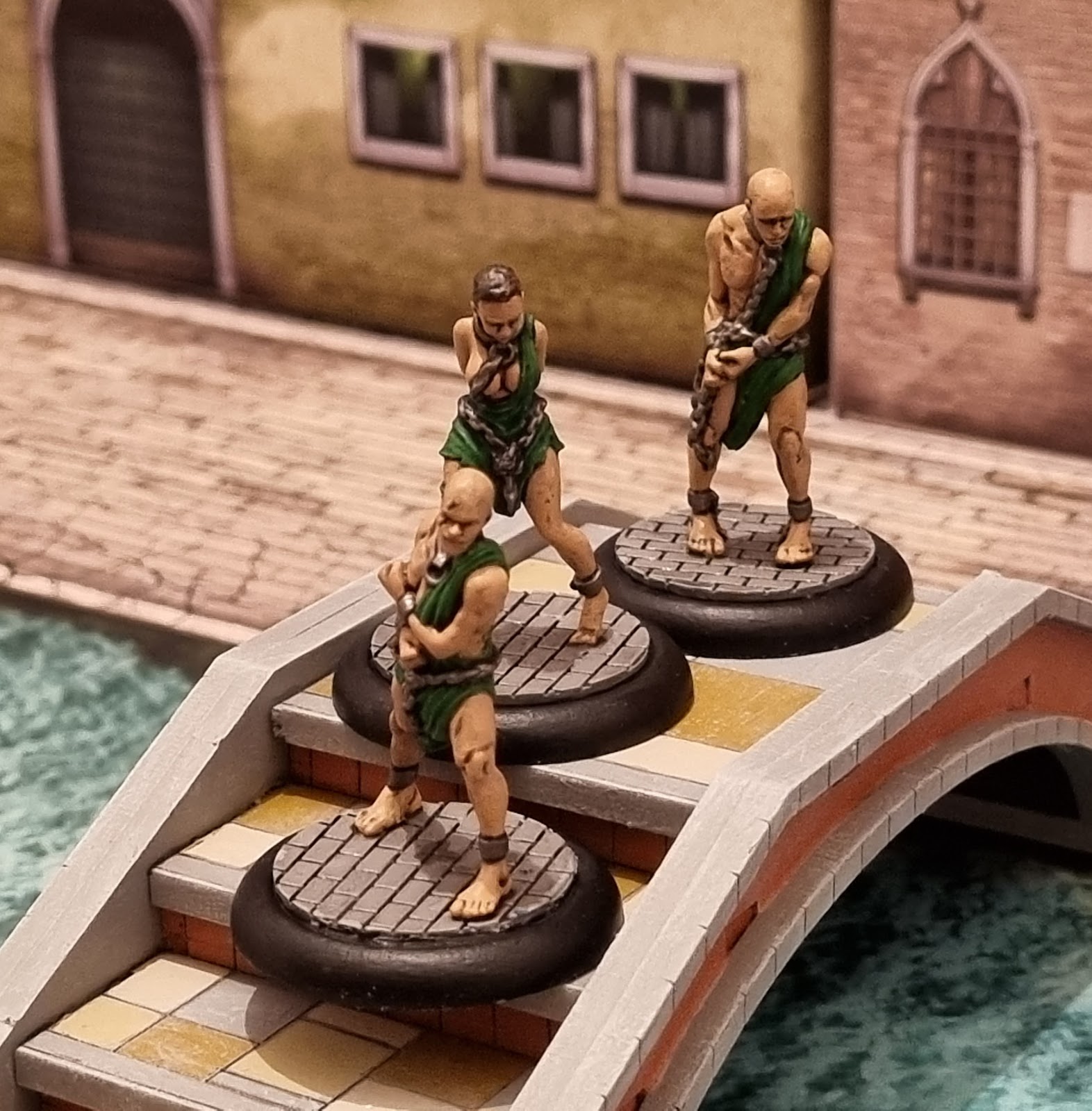 In the spirit of making some progress, I started with the slaves from the Rashaar gang, poor beaten and brainwashed folk who will willingly submit to all kinds of horrors (let's not dwell on that). In game this means they will feed themselves to fish monsters as a sort of mobile medi-kit. 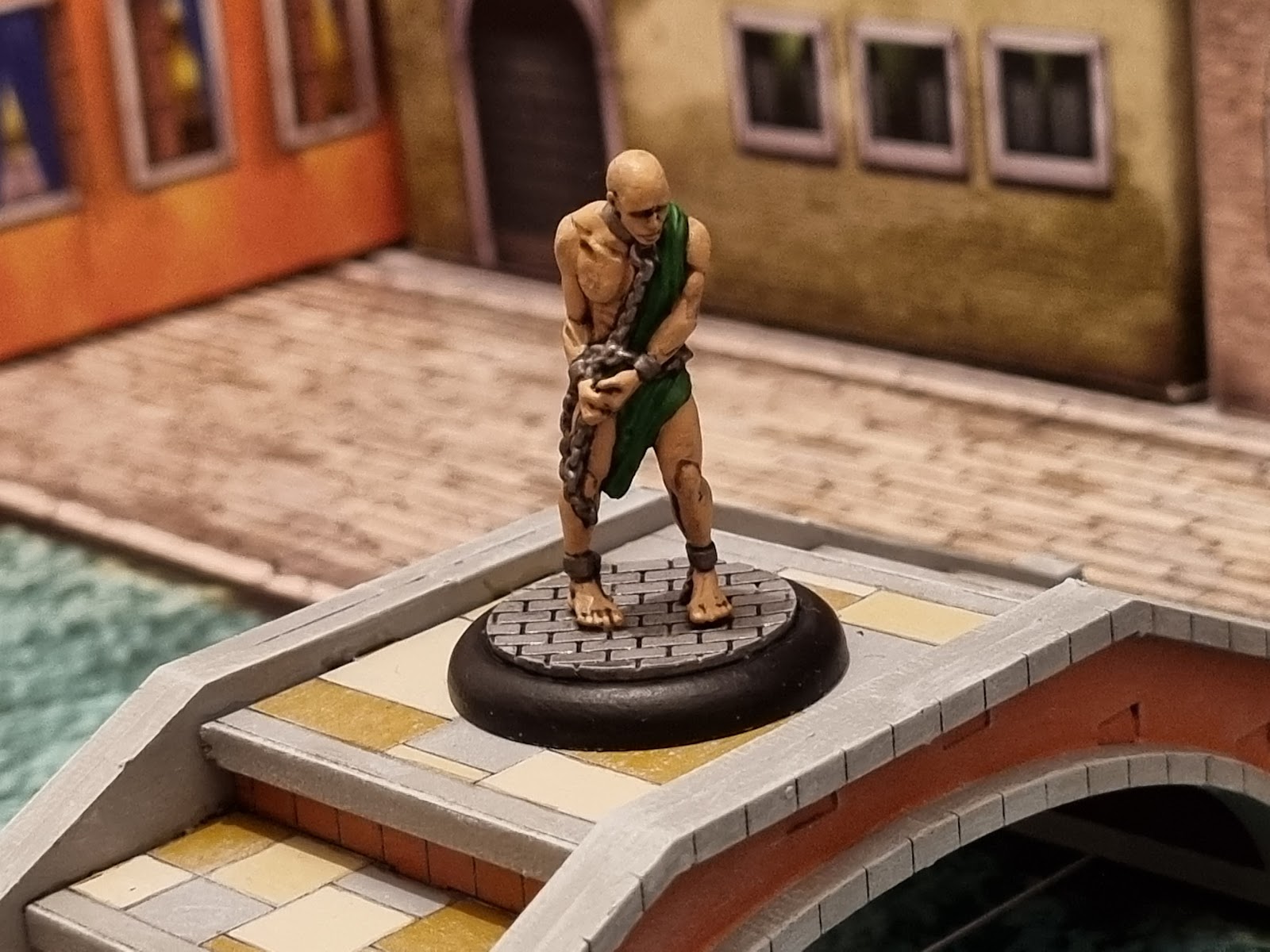 Although the painting was fairly easy, I've discovered that TTCombat miniatures, despite being somewhat cool, take a fair bit of prep. Cleaning up resin is fairly easy, although I always find I miss a bit, but I also came across a bit of a mold release issue, despite washing them in warm soapy water. However, my traumatic experiences with War World Scenics terrain has taught me that a spray coat of matt varnish can work wonders to help tackle this issue. 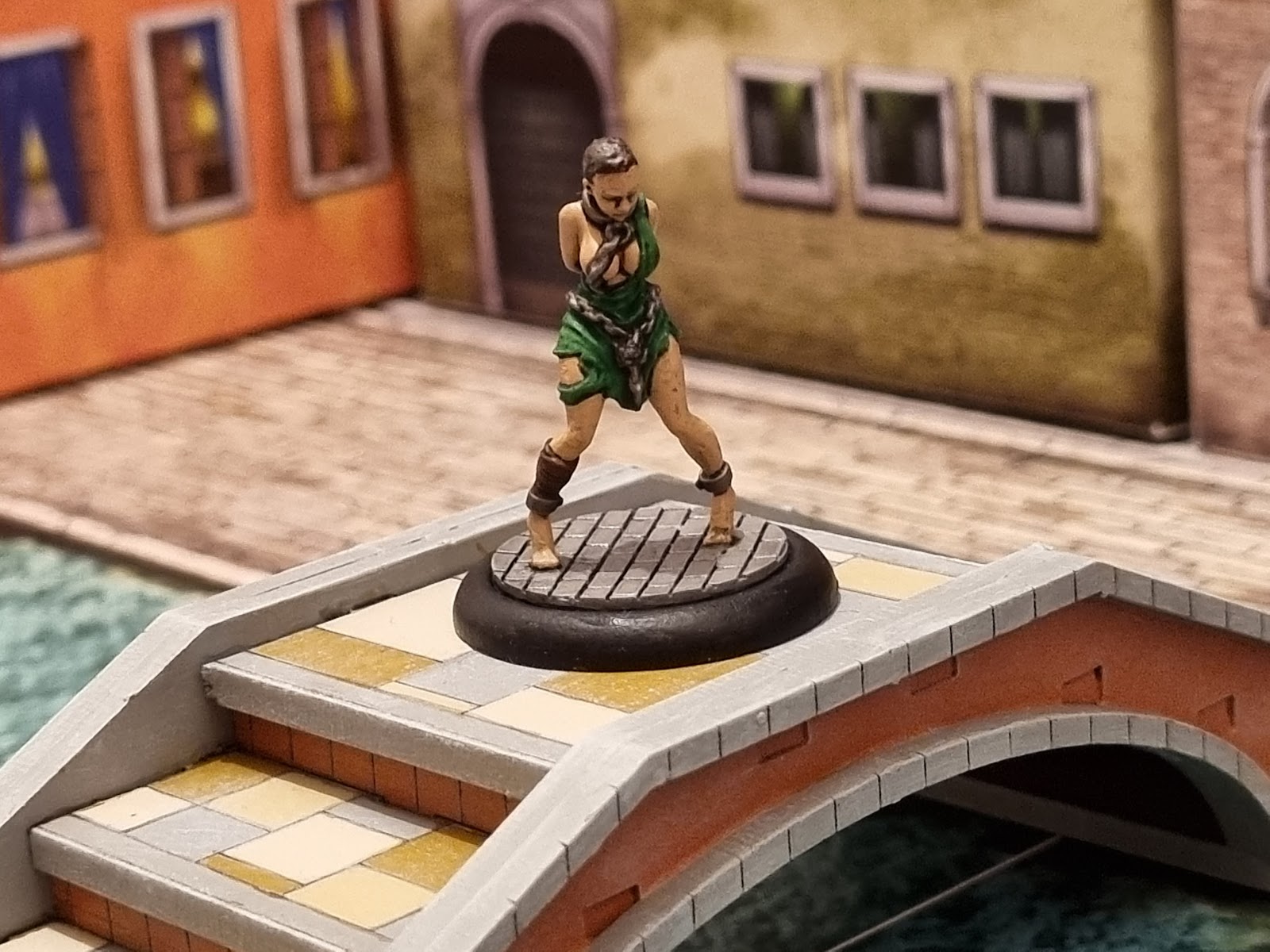 In terms of painting, I've kept these models fairly simple, as there's not much to do in terms of decision making. I've gone with Rashaar themed bright green rags and avoided adding any gore to wounds. What they represent in game (and the real world) is, when you stop to think about it, pretty awful (to be fair, the setting is fantasy horror). Also, some of the design choices were already a touch problematic for my usual tastes, therefore I personally felt more comfortable avoiding too much gritty realism. 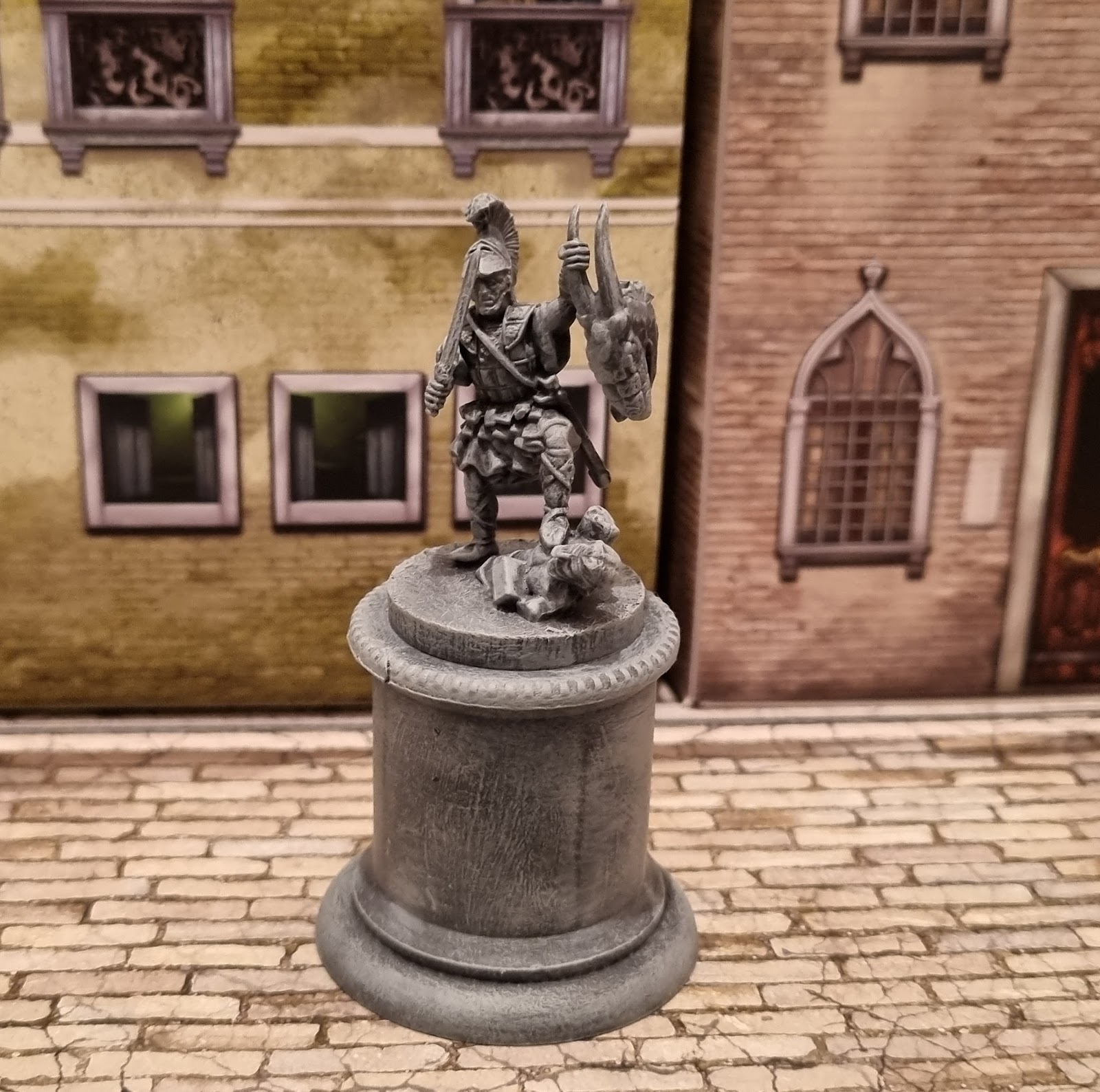 Finally, whilst I was waiting for my package to arrive, I set about cobbling together a small piece of terrain to add a bit of ornamentation to my version of Venice.
The Jason (of Argonauts fame) miniature was a Salute promo miniature from some years back which I'd been planning to turn into a statue at some point anyway.
Admittedly, that is a just a cotton reel he's stood on, but to my eyes, it works well enough and it kept me occupied for the interminable couple of days (first world problems) I had to wait. 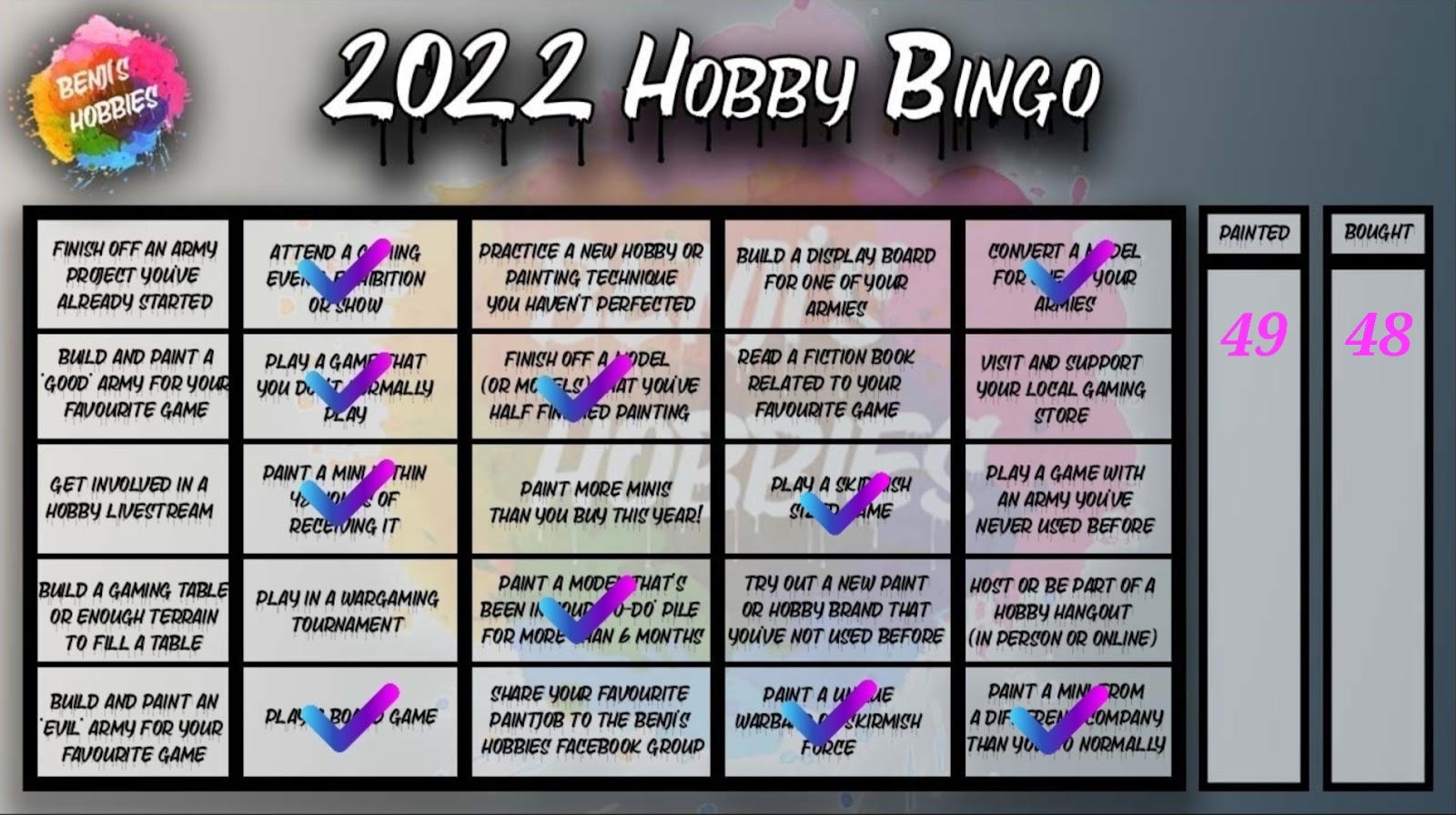 Unfortunately, this purchase has propelled me back into breaking even territory, however, I'm fairly well motivated to get my Carnevale miniatures painted and played with fairly quickly, so I'm not overly worried about the numbers right now.
Acquired: 48
Painted: 49
Posted by Kieron at 12:26 2 comments: