The Battle of the Crossroads (A VBCW Battle Report)

There were upheavals across the country caused by King Edward's series of shocking decisions, every part of the British establishment was shaken to it's core. The Royal Navy was not exempt from this disruption as the Admiralty swore loyalty to the King, Scottish Captains sailed north to join the move for independence and crews mutinied to join the revolutionary movement that had sprung up.
However, caught in amongst the chaos were many sailors who simply wanted out. One such group hailed from Liverpool and whilst at anchor outside Hull, two dozen seamen lead by Chief Petty Officer Jack Tarr slipped ashore and disappeared into the naval dockyard buildings along the seafront, intent on going home. Skilled in the art of scrounging, the sailors set about 'liberating' and 'adapting' several vehicles for their dangerous journey. The looting of dockyards furnished CPO Tarr's men with what amounted to an armoured column including three armoured cars (one of which was equipped with a 37mm gun) with which they intended to cross the war-torn country and get home to their families. 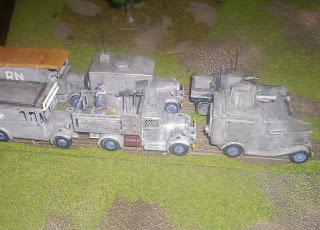 The column made good headway across Yorkshire, trying to avoid trouble as much as possible. The armoured strength of the column helped with this, but CPO Tarr also ran a tight ship and made sure that the Liverpool men paid for what they couldn't steal unnoticed to avoid armed confrontations with local militias.
All went well until the Navy men were passing south of Sheffield. They had almost passed through a quiet village and ahead of them was a three-way fork in the road which offered different routes over the hills when they noticed that somebody had blocked the road with a ramshackle barricade. 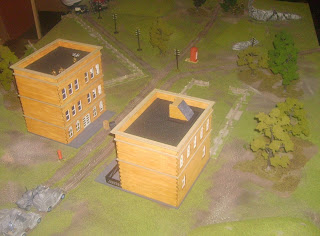 The Handsworth Militia had gotten news of the Naval convoy and had assumed them to be royalist troops moving to reinforce the government troops in the hills. Grabbing what transport they could, the Handsworth men raced ahead of the column and divided to set up ambushes on the roads that the column might take. The plan was that whichever squad saw the column first would slow the Sailors down and send news to the others to converge on their location. Their aim was to destroy the column and secure the vehicles and arms of the convoy to help in their continued struggle against the Fascists. 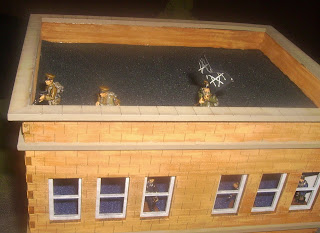 However, those very Fascists, had also set up a series of roadblock to secure the routes across the Pennines to the B.U.F. stronghold in Manchester. The roadblock on the route the Navy men were taking was commanded by Lieutenant Nigel Chuffington-Smyth. With two routes to block he had split his command, with his riflemen blocking the southern route with their vehicles, and his SMG assault group led by Sergeant Jack Boot waiting in ambush on the northern route. Having recently captured a consignment of Russian weapons destined for some socialist mining community, Chuffington-Smyth's commanded were well armed and determined to not let anybody through. 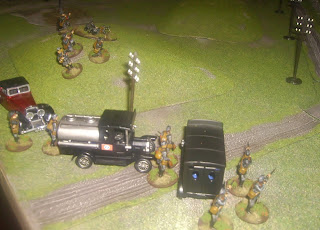 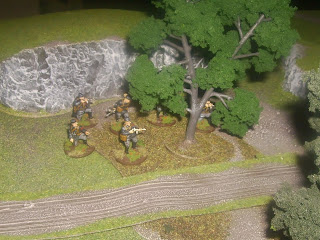 Alert to the arrival of the column, the Handsworth men sent word to their comrades and sprang their ambush. The seamen were caught completely off guard; a powerful burst from the unit's LMG immediately wrecked one of the armoured cars leading the column and further blocked the road.
However, remaining cool under pressure CPO Tarr ordered his two well-armed squads to disembark on either side of the road and the LMG mounted on the armoured flatbed returned fire. He also directed the armoured car with the big gun to begin to blow through the barricade to allow the column to escape the bottleneck. Rushing to their comrades aid, the rest of the Handsworth militia came quickly. One unit arrived on foot from the south and began trading fire with the sailors by the road. The others, further away to the north, scrambled aboard their improvised transport and raced towards the sound of the guns. 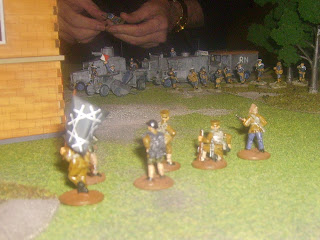 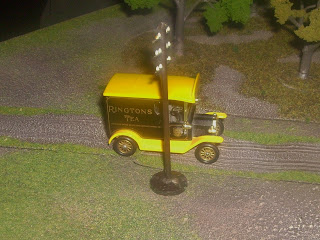 Able with far more fire power to hand the Navy men slowly drove back the Handsworth reserves arriving from the south and moved towards the ambush position in the buildings. The big gun blew through the barricade and the column began force its way past the ambush. 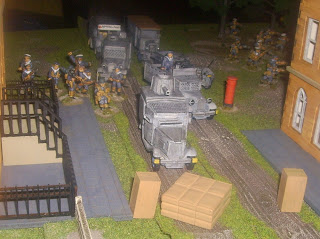 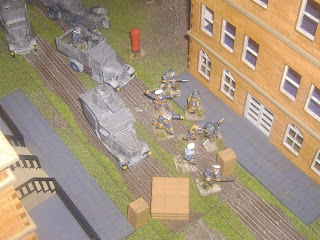 With the blockage on the road cleared, the 37mm gun was loaded and ready when the second unit of Handsworth reserved appeared further down the road. As the turret swung in their direction, the militia disembarked in the nick of time before their transport was wrecked by the pinpoint accuracy of the big gun. 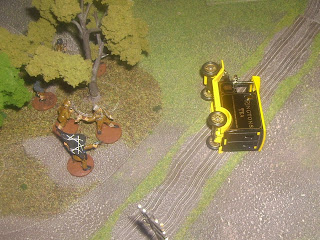 Meanwhile, Chuffington-Smyth had heard the sound of gunfire further down the road, and despatched a squad of motorised rifles to investigate the disturbance. Seeing the black vehicle bearing B.U.F. marking appear round the bend, the Handswoth men thought that they had been caught in a trap and opened fire on the oncoming vehicle.
Completely unaware of the danger, the B.U.F. drove straight into a burst of LMG fire. One of the bullets must have pierced a fuel line and the vehicle exploded in a ball of flame. Only a single bedraggled legionary crawled out of the wreckage alive: the seemingly cursed Private Milligan, still traumatised from the beating he had received at the Battle of Cable Street. 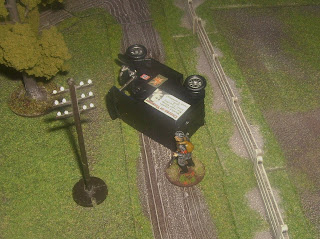 The final element from the Handsworth Militia, Captain Lilley, had gotten lost on the back roads as he rushed to take command. Eventually working out where the battle was happening, his car travelled at speed straight into the ambush laid by Sgt Boots SMG squad. A burst of fire caused the car to flip and Captain Lilley was taken captive. A good day's work and after interrogation, perhaps the right level of prisoner to secure the release of the lovely Miss Brown. 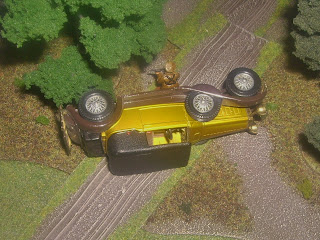 Although the Handsworth men had managed to wreck another armoured car, unsupported they were unable to prevent CPO Tarr's men from assaulting their position and capturing the building. With all of their reserves driven off, the ambush had failed. 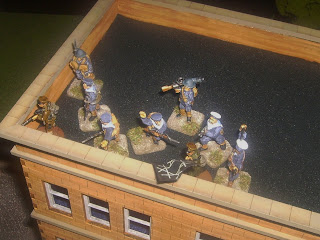 With their enemies defeated, Jack Tarr looked westwards from his vantage point. He could see burning vehicles blocking all the roads ahead and could make out figures moving amongst the hills and trees. Fearful of another ambush, aware that he had lost two of his armoured cars, and concerned for his wounded men who needed care, CPO Tarr ordered his men to form a perimeter. 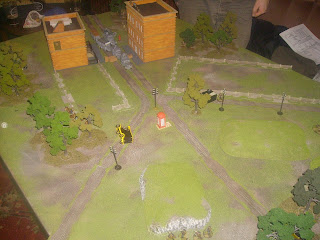 The men from Liverpool would hole up here, repair their vehicles and recuperate before pushing on towards home.

This game was played using a cobbled together set of rules based on Warhammer 40k, using weapon stats from the free downloadable QRS for The Great War by Warhammer Historical, with a sprinkling of chance cards from the Gentlemen's Wargames Parlour and character upgrades based on Pulp Miniatures' 'Rugged Adventures'. The game was completely devoid of balance, points, or any sense of competition and we allowed the game to tell a story to us.
A great time was had by all and we have a couple more plot hooks to inspire further scenarios. The Handsworth militia may be keen for a prisoner exchange, the Royal Navy might make another push across the Pennines, and the B.U.F. know that the other factions have been bloodied and are probably planning something dastardly...
Posted by Kieron at 09:44