Work and home commitments have meant that I've not had as much time as I hoped to make progress this month, however, I have managed to get everything done that I bought at Vapnartak for VBCW. Not only have I painted a unit of the Wortley & Penistone Kingsmen (yes, I changed the name - not certain I'll stick with this either) but I've also completed their heavy support; the Dragon! 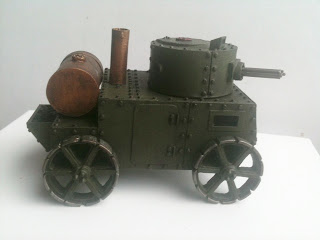 When the Earl of Wharncliffe declared for the king, he already knew that his situation was precarious. Surrounded by steelworks and coal mines, he knew that communist factions would find support in the area. He also knew that he could not expect large scale support from the army which was tied up to the north and west, and his own men were only equipped with a motley selection of firearms. Something had to be done to strengthen the defence of Wortley.
A man called Moore, a veteran of the Great War, mentioned something he'd heard about in the trenches. The Americans had experimented with steam powered tanks. With coal and steel readily available, and using the expertise of railway engineers work began on constructing a 'light' tank.
When the clanking beast lumbered out of the workshop, roaring and belching smoke, it didn't take long for some local wag to christen it 'the Dragon' after the local legend of the Dragon of Wantley, and the name stuck.
Slow, ponderous and unreliable, the Dragon is more of a deterrent than a combat engine. So far, its very presence seems to have deterred the lightly armed socialists in the area from attacking Wortley. Whether their trepidation once they have seen it in 'action' remains to be seen. 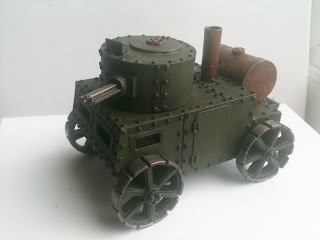 I've still got a little bit of work to do on the tank before it's finished, including some form of insignia that I've not decided on yet, but it's certainly ready for the tabletop and will get it's first run out this week.

I've also been doing some gluing last week. These Warlord ECW plastics are not for me, I was saving my dad a very fiddly job. However, their presence here is to prove that I haven't been completely idle.