As mentioned in a previous post, once again I took on Pete's Russians in a game of Flames of War.  To change the feel of the game we went for a Mid War battle and I chose an Infantry force (Pete has lots of tanks, so he was Armoured again).  Having to leave at least half my units in reserve meant that I began the game with a large platoon of Pioneers, 2 PaK 40 Anti-Tank Guns, 3 Marder III Tank Hunters (in ambush) and Priority Air Support. Given that I had two objectives to defend I deployed the Pioneers and the PaK 40's close to the front objective (the Pioneers placed a minefield in front of the objective too, which would limit Pete's possible approaches towards it). They're goal was to sit tight, die slowly and wait for help to arrive. 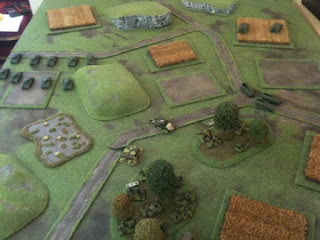 In response, Pete was able to deploy his whole force.  11 T-34's (Commander and 2 units of 5), 2 SU-152's and a Razvedki Platoon. It was a compact, powerful force which if he rammed it down my throat, I would struggle to hold for the three turns I needed to.

As you may have noticed from the picture above, that Pete did indeed proceed to ram his army down my throat. The massed tanks streamed down the channel on the left, the Razvedki came tearing down the centre threatening to jump out of their transports and assault my PaK40's. Finally, I learned all about what breakthrough guns do as the SU-152's blew the shit out of one of my PaK 40's.  Things were looking ropey, I needed a response to the horde of tanks. 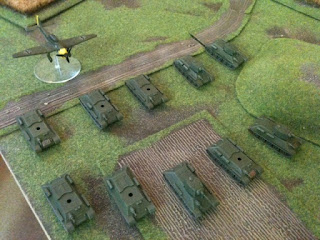 Did I mention that I had Priority Air Support? 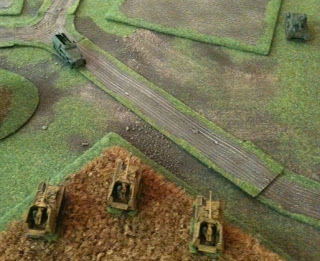 And Marder III's in ambush?

As a turn 1, it was amongst my best. The Luftwaffe destroyed six T-34's and two of the remaining four failed their morale check and left. The Marders blew up two of the three Razvedki transports and Pete rather sportingly failed all three passenger saves. 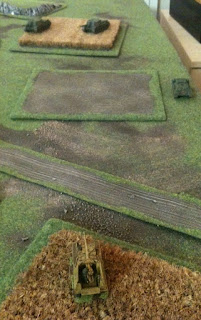 I may have given Pete a bloody nose, but his army still had teeth.  The SU-152's and the Commander's T-34 opened fire on the Marders, destroying two of them.  The remaining T-34's advanced to pour fire on to the Pioneers from beyond assault range, and the Razvedki shot up the second PaK40 but were prevented from assaulting by sustained SMG fire pinning them. 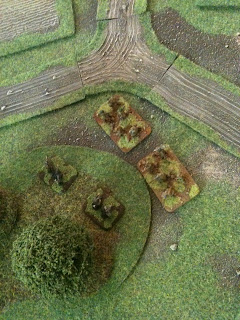 The following couple of turns saw no aircraft (to Pete's relief), so my Pioneers sat tight attempting to weather the incoming fire from the Soviet Tanks. With the Razvedki pinned, my 2iC took the opportunity to lead the PaK40 commander in an assault against them, driving them back.  They continued the assault again but were eventually destroyed, leaving a single stand of Soviet infantry, which refused to break.  With the loss of the PaK40 platoon, I suddenly realised that I was vulnerable, if the last Marder was destroyed, I'd be taking company morale tests, so after taking out the Soviet command tank, the Marder drove for cover. I now had nothing to fire back with unless reserves turned up... 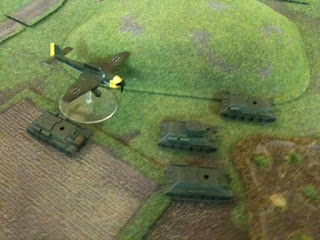 ...or my planes returned.

Another air strike saw only a single T-34 survive, not enough to storm and hold the objective.  Pete was forced into desperate measures. He brought the SU-152's forward towards the objective, sent the lone infantry stand on a suicide mission towards the second objective and brought the T-34 round to snipe at the last Marder. One hit and I could be failing the company morale check. 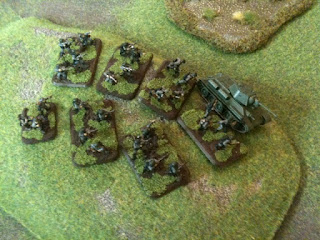 ...and then my reserves began to arrive. A platoon of Grenadiers mobbed the last T-34, destroyed it, and then ran on to secure the objective. 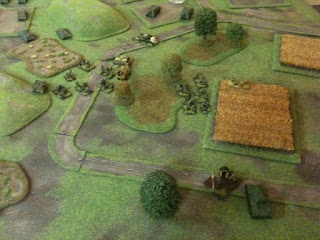 The lone stand of Razvedki were faced with a newly arrived KV-1 (looted), guarding the objective, and was then mobbed by the long suffering Pioneers.  With only the SU-152's remaining, Pete took and failed his company morale check and the game was over.

In retrospect, the game was well over on turn 1 with the destruction of the majority of Pete's tanks.  He shouldn't really have massed them when I had complete air superiority, but he made a damn fine job of stretching his remaining forces to at least threaten a win.

After the last two games, I suspect the Pete will be investing in some AA guns; which leads me to...

In a new series of tips I will be pointing out little money saving brainwaves I have and passing them on to you.  First is for some light AA support for Russian Infantry or Motorised Infantry. Battlefront Miniatures charge £7.50 for one of these:

However, a few spare infantry figures (don't tell me that every Soviet player doesn't have plenty of these), a Zvezda Zis 5 Truck and a bit of creativity with some wire and you can have something approximately the same for £3.  That's two for the price of one, that is.

Next week I'm playing Pete again, but this time we'll be trying out Kings of War, Mantic's not-at-all-like-Warhammer Fantasy Battle game. The rules and army lists are free, and strangely it uses the same basing as WFB (odd that...) so it's costing me nothing to play. I'm already liking this...
Posted by Kieron at 12:57