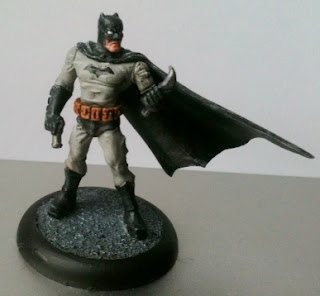 The Batman, a.k.a. Bruce Wayne, his parents were gunned down in front of him...yadda yadda yadda...you know the rest.

The model is another Heroclix figure, cut from the two strange chimneys he was stood on. This is probably the best posed of the Batman Heroclix I've got (there's been a lot of versions, but most of them are terrible for some reason) and the cloak blowing in the wind is fairly dramatic.

In terms of painting I simply highlighted the black, washed the utility belt and re did the eyes as the original paint job was pretty good and I wasn't sure that I'd better it. I still need to add something to the base - any suggestions gratefully received.

On that subject, here's Firefly with his updated base: 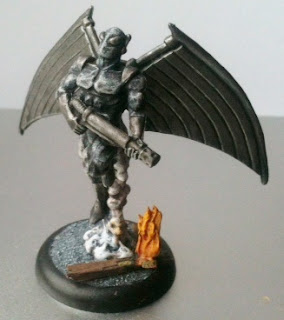 I'm not overly keen on how I've done the flames, so if anybody feels like giving me a brief tutorial on flame painting, I'll be happy to learn. However, the model is definitely improved with a small splash of colour.

Finally, I said I'd begin some urban terrain this month, and I've held true to my word. Here's my warehouse from Warbases. 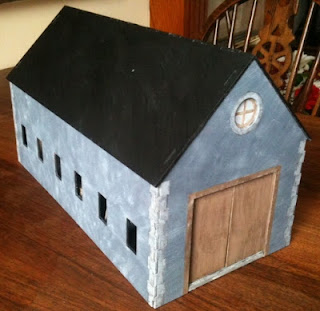 Obviously, the building isn't finished yet, I've still got the roof and the windows to do, but overall I'm really happy with how this is coming along. The colour scheme has been chosen to be somewhat Gothic in feel so that all my buildings, together will evoke Gotham City. Given that my wife keeps referring to this as my 'church', I think that I'm achieving my intended effect. 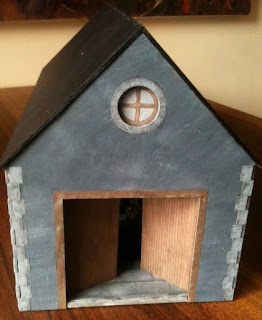 I'm really happy with the doors, which have been magnetised so that they can stand open or closed which makes them piece much better for skirmish scenarios. I'm not exactly sure what I'm going to with the roof and doors yet, but the building is usable as it is, and so I'll not rush any decisions. 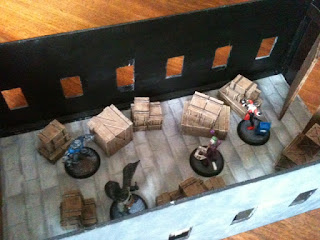 Inside I've kept it simple, matt black walls and stone effect paper on the floor. The reason for this is to keep the building as versatile as possible. I'm going to keep most of my interiors fairly featureless to allow terrain pieces such as the crate below to really stand out.

As my first decent sized building I'm happy with how this is coming along. I'm a little disappointed that the warehouse didn't fit together as well as the 4ground shed I bought, and there's a huge amount of featureless MDF that needed painting. However, for £12 I'm not really complaining, but given a choice between 4ground and Warbases, on current evidence I'd choose 4ground.

In other news, I'm STILL waiting for my miniatures from Supply Drop, so I won't be meeting that part of my target this month. An email enquiry has been sent, but if I don't get a response, I'll be cancelling my order.