Given that it was Valentine's Day this week, I thought I'd paint something seasonal.

Harley Quinn (a.k.a. the improbably named Harleen Quinzell) was a student doctor at Arkham Asylum who turned out to be madder than the patients when she fell for the Joker and joined him, for better or worse in a life of madcap crime. 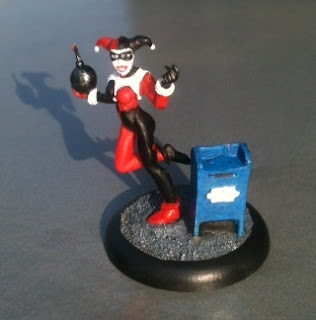 Most, Heroclix sculpts are at best ordinary. I'm trying to use the better ones, but I have to say, I really like this model. There's something playful and characterful in the stance which capture's Harley's romantic brand of insanity. I've tried to add to it by adding the mail box with graffiti on it, as if whilst holding a bomb with the fuse lit, Harley has felt that expressing her love for Mister J in lipstick  was a higher priority than the explosive. 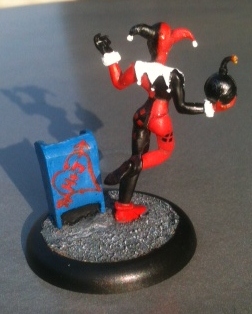 In terms of painting, I did very little to this model, simply tidying up the paint job already in place. Sad to say, but the highlights are all sunlight. However, given that the character was created for the animated series in the nineties and so a traditional four colour look works well for her. I'm not so sure about the mail box, simply because it's a poor casting that I lifted from another Heroclix model (ubernerd points awarded if you can name the character the mail box came from). I may replace it with a resin mail box in time, as I like the concept.

As a side note, I'm still waiting for Killer Croc and the Cops. This experience has given me the time to think about whether I wanted to pay £12 for single models and I've come to the decision that the Knight Models range is lovely, but just too pricey for a chap with a blog called Cheaphammer. I do intend to buy a couple of the figures for models where size isn't an issue (Croc being one), but as I won't be getting the cards, I won't be playing their game either, I'll be generating my own rules.

To finish, here's some other somewhat cheaper alternatives for a £12 Harley Quinn that I researched before settling on the Heroclix model:

Firstly is Kira from Anima Tactics, who with a paint job and a little bit of sculpting should you so choose will work as the version of Harley Quinn from the Arkham Asylum computer game.

The other option is Bogdana from the Jokers gang (a number of whom may find their way into the employ of a certain purple-suited chap in my miniatures cabinet) in the French game Eden.

Both of these miniatures are significantly cheaper than the Knight Models offering, so even if Heroclix don't float your boat, there's still options available. My decision was made by the fact that I already had the Heroclix figure...and I'm cheap like that...
Posted by Kieron at 11:57