"Some men just want to watch the world burn..."

As part of my long term Batman project (whether or not this will involve the Arkham City miniatures from Knight Models remains to be seen), I've started to revisit my Heroclix collection.  This involves selecting the better sculpted larger scale models with that might work with Knight's 35mm scale and attempting to repaint, re-base and improve the miniatures to see whether I can avoid spending hundreds of pounds on Knight's entire range (Cheaphammer for the win!).

Here's the first attempt; the Clown Prince of Crime himself, the Joker. As I've said previously, I'm trying to improve my painting and so I took the time to try to highlight properly (a step I often skip when bulk-painting armies), and if I do say so myself, it's worked pretty damn well. I'm not sure that the photo does it justice, but I'm of the opinion that this is one of the best models I've ever painted, and it's definitely one of my favourites. 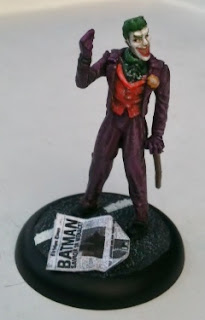 I'm also pretty chuffed with my first bash at urban basing. Sand and PVA, painted and dry-brushed is pretty standard stuff, however the chance for a little creativity initially got me adding white lines as if the Joker is stood in the middle of the road. The paper is a copy and paste from a newspaper from one of the Nolan trilogy, reduced and printed. Although you can't see it here, the headline is just about legible and reads "BATMAN SAVIOUR OR MENACE?". I quite like the idea that the Joker has been reading the paper and is amused by the irony that he's the real menace, but the press are trying to get people whipped up about the Batman. 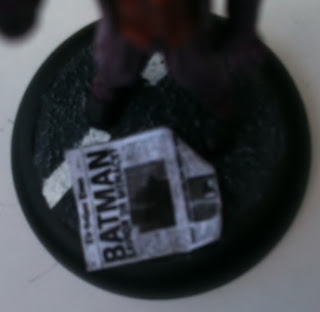 Those of you who have been following the blog for a while will probably be thinking, "Haven't I seen that before?" And you'd be right. I first repainted this model about a year and a half ago. However, the highlighting and basing are new. Just for the purposes of comparison, I've included a picture of how the model looked originally. I hope, you'll agree that it's an improvement. 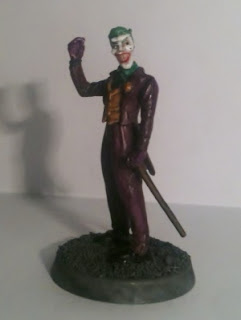 Next up, it one of the lesser lights of Gotham City's rogue's gallery, Garfield Lynns, the Firefly. For those that don't know, he's a pyromaniac and arsonist. The wings on his costume allow him fly on the thermals of the fires he creates and the flame-thrower is fairly self-explanatory. 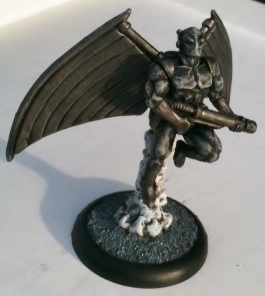 I initially thought that I'd buggered this paint job up, as I quite liked the original pre-paint. However, as with all Heroclix figures, it lacked any depth and so I attempted a light dry-brush. However, I overdid it and only the judicious application of a black wash saved the day. The smoke, was originally done as flames at the bottom, I think to represent Firefly rising on thermals. However, even though the character doesn't actually have a jetpack of any kind, I figured that it would look better as a smoke trail; and to my mind it does. 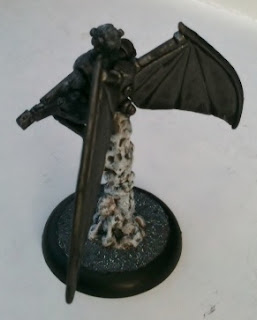 I've still not finished the base, as I'm a little stumped as to what to do. I'm not sure whether I should continue with the smoke trail concept and add scorch marks to the base. I was also considering having something on fire (not sure what thought) to add a bit of colour. Any suggestions as to what to do and how to do it would be gratefully received.

Finally, you may be wondering why I've not done anything with the Police and Killer Croc I ordered from the Knight Models range. That's because despite the company I ordered them from saying that items would be despatched within 5 working days, there's still no movement and no contact from them almost two weeks later.

This is the first time I've ordered from this particular company, but there might be a little naming and shaming going on at some point if this continues for too long. I have no problem with delays with orders, however a brief email explaining always helps with the wait.

I'm off to Vapnartak in York with Pete and Matt tomorrow, and so will be aiming to pick up some scenery for Messrs Joker and Firefly to destroy. And given that I've painted two villains, and have bought a Batmobile, you might be able to guess who's next in the painting queue...
Posted by Kieron at 07:38