Thinking Outside the Box

I know I hinted at Batman, but I reneged on this when presented with an alternative hero to paint. He's still Gotham City stalwart and long time character; he's also been the Batman for a bit. He's the former boy wonder, all grown up: it's Nightwing! 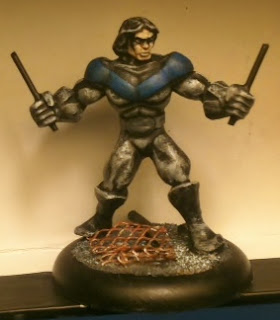 Nightwing is essentially 'what Dick Grayson (that's Robin to the uninitiated) did next'. At some point in the seventies, Robin turned into a stroppy teenager, decided that green underpants was not a good look and set up on his own as Nightwing. I'd say that he designed a cooler costume, but he didn't: his original outfit featured gold trim and a Liberace collar. Only later did Nightwing's costume get trimmed down into roughly what Batman might look like if Bob Kane was designing him now.

The model isn't a Heroclix sculpt. I do have a Heroclix Nightwing, but it has a mushed face and odd pose. This little chap is from a new company called Crossover Miniatures (stocked in the UK by Minibits), and I've been wanting to support this company as it appears to have been set up by a chap as a solution to his own problems finding the miniatures he wanted. The only problem is that I'm working in a roughly 32mm scale and Crossover seem to be genuine 28mm. Although people come in all shapes and sizes, that kind of scale difference causes problems when you're trying to look heroic.

However, the miniature above is one called 'Everest' and appears to be a 'brick' (superhero parlance for a strong guy) and is a fair bit bigger than the rest; and so usable for me. I added the escrima sticks and the head is from a GW Bretonnian Knight (Crossover minis come with a choice of three heads each - none of them were quite right for Nightwing). The miniature itself has the V design modelled on, which helped a lot, and was a very clean cast and sculpt (there was no flash to remove). The biggest job I has was hacking off the solid base.

One of the things I'm really enjoying with these superheroes has been the basing. With Nightwing I decided to have him stood in an alley and so littered the floor with rusting mesh, a metal pipe and a coke can. As a side note, I've added some burning wood to Firefly's base. 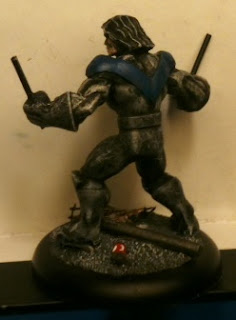 All in all, I can highly recommend Crossover Miniatures. I'm tempted to use their sidekick for Robin and there's a suitable substitute for Catwoman if I can't come up with something else. If I ever do something similar to my Gotham project for Marvel characters, there will be a number of Crossover minis I'll be picking up as they're a number of miniatures that are suspiciously useful for a number of Marvel characters.

Meanwhile, on the other side of town, I'm still waiting for delivery of my policemen and Killer Croc. The company keeping me in the dark are The Supply Drop. Seriously, a simple email explaining that things are taking longer than they'd expect would go a long way towards me ever using them again.

In other news, I've been paint some scenery I picked up at Varpatnak. Basically, boxes... 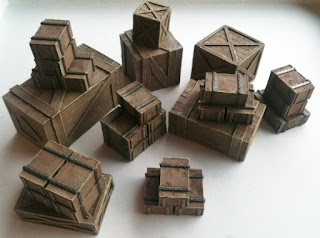 These are a combination of crates from Ainsty Castings and an independent trader who'd set up in the bring and buy section (can't remember his trading name). The Ainsty crates are really good quality and I had, the other ones aren't. The price difference wasn't enough to justify the drop in quality in future purchases.

Also built and painted is this shed from 4Ground. A very simple and easy build. 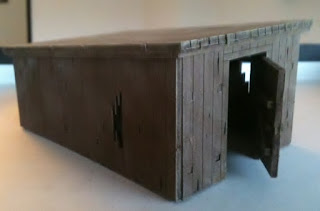 I bought it a a test piece as I've not built mdf scenery before, so I wanted to make sure that I wouldn't ruin a more expensive model later. It's also incredibly versatile, as a shed is a shed is a shed. This piece will work for fantasy games, my 1812 project, VBCW and modern stuff.  The main things I've learned is that I needed to buy some new glue, and mdf doesn't dry-brush well. Both extremely useful lessons given that I'm planning on building a warehouse later this month.
Posted by Kieron at 03:46