Firestorm: Lorraine - No Plan Survives Contact With The Enemy

The last couple of weeks have been busy at work and home, leaving me little time for painting and most of my playing time has been taken up with a few games of Star Trek: Attack Wing (more on that in the coming weeks). With one thing and another, I've only just got round to sorting out the campaign map since our last game of Flames of War.

In brief, I was the Germans fighting Matt's Americans, who for once managed to actually gain the initiative and decided to attack Arrancourt across the Moselle. I decided to surprise him by taking an almost totally infantry force as a counter to his laser tanks. I wanted to give my Nebelwerfers a run out for the first time, and backed up by my PaK40's a borrowed Flak 88 and a shedload of Panzerfaust-toting infantry, my plan was to dig in and blow up the American Armour as it rumbled into view.

Matt dutifully picked an armoured list and all would have been well had we not rolled up the Counter Attack mission. Suddenly, I found my swarms of infantry penned into one quarter of the table needing to get out of their foxholes and engage in a footrace with Stuart tanks in an attempt to secure the undefended objective on my flank. What's more, I had no units suitable for being in reserve behind Matt's positions.

All in all I made a fairly good fist of a bad situation. I managed to repel an assault on my defended flank by two platoons of Shermans and a unit of infantry, and in the process, got myself into a position where just one more platoons destroyed would cause Matt to have t make tests. However, despite sending three platoons of infantry out to secure the other objective, only one and a half made it there. I did manage to secure the objective and kill a few tanks, but time was on Matt's side and a combined assault from Matt's armour finally broke my pioneers and won the game for him.

It was closer than I thought it would be, but I think I was always on to a loser. Matt, didn't rush or make any silly mistakes with vulnerable platoons and so didn't really ever give me a chance to destroy that final platoon, and by the end I was relying on either a very lucky artillery strike or a really unfortunate assault from Matt. 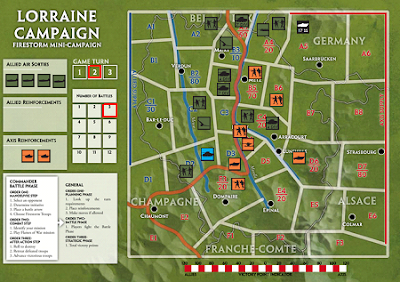 As you can see, this result saw the American open another hole in the German lines and push towards Strasbourg. There is now a gap in the US lines which a German general could exploit to cut off the US spearhead, however, the campaign appears to be tipping in the Americans favour.
Posted by Kieron at 07:08