Our next couple of games in our Star Trek: Attack Wing campaign were played over the weekend and saw Romulans defending against a Klingon invasion in a match up which will be hence forth known as a 'Cloak Off'. Meanwhile, my mighty Dominion fleet decided to have a go at expanding in a different direction and take on somebody they could actually see; the Federation.

As usual, my fleet consisted of three ships: Breen Battleship the 'Gor Portas' commanded by Thot Gor, a Jem'hadar Attack ship packing phased polaron beams (which ignore enemy shields) and a Cardassian Galor Class ship. I feel that I'm missing a ship as I'm still having to pack my ships with upgrades which feel surplus to requirements.

With Picard injured, the Federation fleet was led by the 'Enterprise' captained by Will Riker, a Miranda class ship with Clark Terrell in charge and a second Galaxy class ship packing an array of fiendish mines.

Thing began well, with the Federation flying its two Galaxy class ships towards my fleet, whilst Clark Terrell took his ship around the back of the planet. Facing a divided enemy, the Dominion leaped forwards and poured photon torpedoes and polaron beams into the Federation fleet, knocking down the shields on one ship and putting early hull damage on the Enterprise. However, the Jem'hadar Attack Ship was engulfed in phaser fire and immediately put out of action.

The Cardassian ship tried to add fire to proceedings and aided the Gor Portas in taking down the Galaxy class ship. However, in return the Gor Portas was mined, torpedoed and phasered into submission, leaving the Galor class ship outnumbered, outgunned and outmaneuvered. It's one advantage of a 180 degree fire arc was worthless against a Miranda (180 degree also) and the Enterprise (360 degree) so I was left with no option but to run and hope I could turn quickly enough to return fire.

I  did managed to separate the enemy ships by flying round the planet and traded shots with the Miranda, knocking down its shields. However, the Galor was left severely weakened and unable to match the Federation's maneuverability, was eventually cornered and destroyed.

I managed to avoid losing any unique cards for the campaign, but both the Gor Portas and Thot Gor we injured, and as I was attacking I didn't lose territory. However the addition of new ships to the Dominion fleet can't come quickly enough for me. I made a couple of mistakes by not going after the Miranda earlier, or concentrating my fire in the early exchanges, but I still feel over-matched by all three opponents.

Meanwhile, on the other side of space, the Martok led his Klingon fleet into Romulan space and promptly wished he hadn't as a generic Romulan fleet demonstrated the art of concentrating fire and systematically pounded one Klingon ship after another into dust.


With attacks proving fiendishly difficult to pull off for no significant reason, there's been little movement on the map. This campaign could last for some time at this rate.

Unless people start attacking me that is... 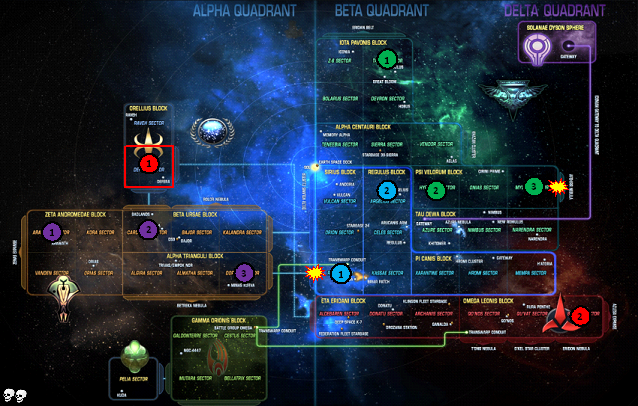