Having successfully lured both Matt and Wes into not only playing the Batman Miniatures Game, but also building gangs (Matt has a proxied GCPD force and Wes has built a TV themed Arrow gang), my crosshairs fell on my final target of Pete and we arranged to play a game.

Pete has made mutterings of being interested in painting the Watchmen, so I put together a Batman gang for him to use that would play in a vaguely similar way:
Batman (Frank Miller)
Nightwing
Robin (Damian Wayne)
Catwoman

Although full of powerful mobile characters, this gang is short on numbers and without Arrest it lacks the ability to really cause casualties. The Watchmen are less mobile but better at taking folk out of the game.

The reason I used this crew is I'm probably/possibly going to a tournament in Lichfield in December, and rather than force the awkward issue of proxies I'm looking at how good a crew made of just official models could be. My Joker is Clix, so he was out.

We rolled up a Patrol scenario with my crew breaking out of the grounds of Arkham and trying to disappear into dark alleys of Gotham, and vice versa. I picked   Riddle, Loot and Ammo as my objectives, Pete went for Titan Container, Riddle and Loot. I'm still not playing with strategies as I've not yet done cards for them. 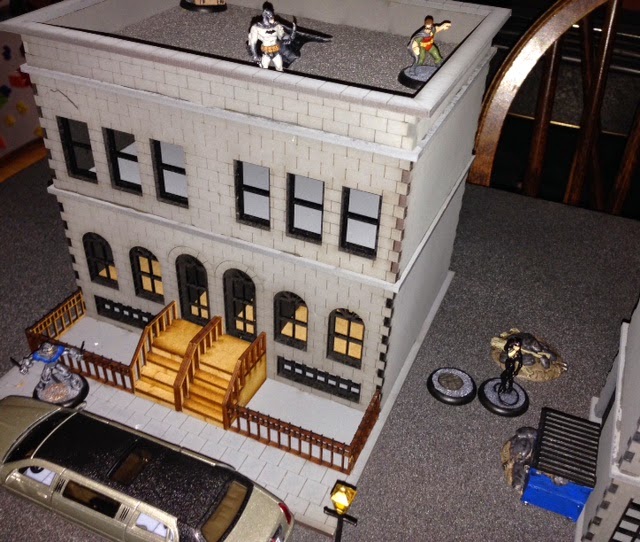 Alerted to the blaring sirens from Arkham, the Bat-family take to the streets and rooftops. 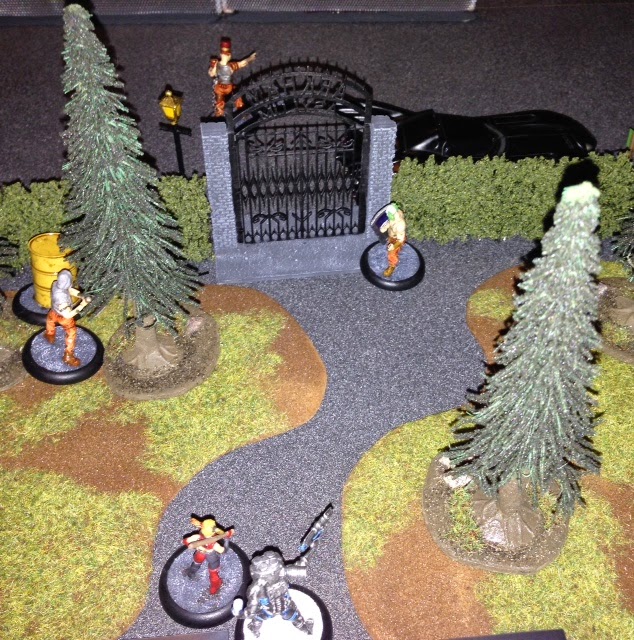 Harley's crew and Freeze spread out in the Arkham grounds, Contra-Auguste grabs himself a Titan Dose whilst Harley heads for the man with money she was being paid to spring Freeze and Croc (who's nowhere to be seen...). 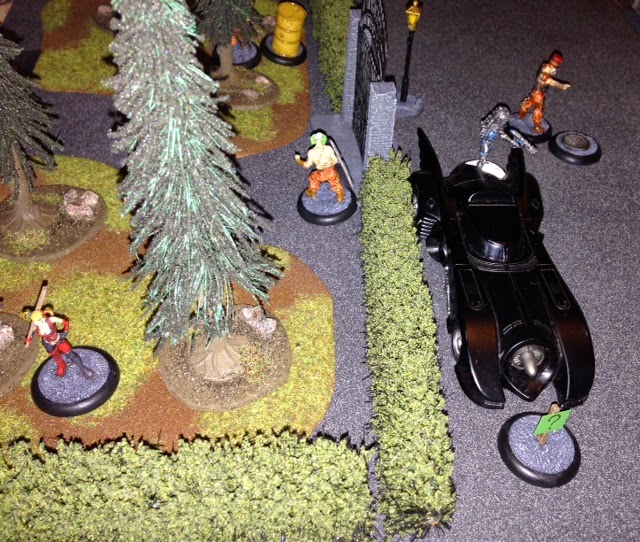 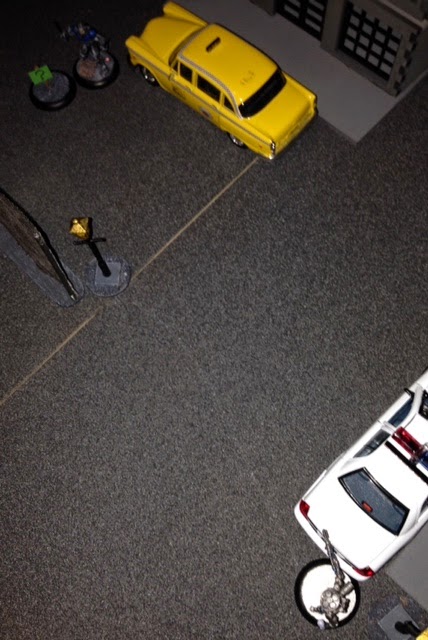 Seeing that Nightwing is out in the street (getting ready to solve a riddle), Freeze ices him with a blast from his freeze gun. 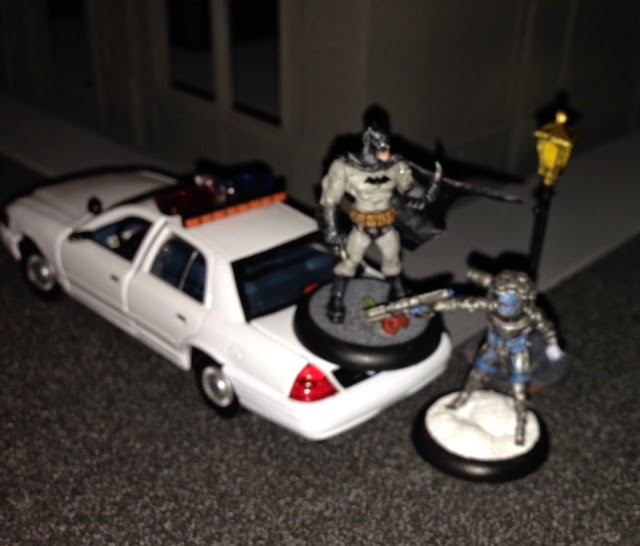 However a dark shape descends from the night sky. The Batman lands imposingly on a car next to Freeze, but his blows fail to connect. 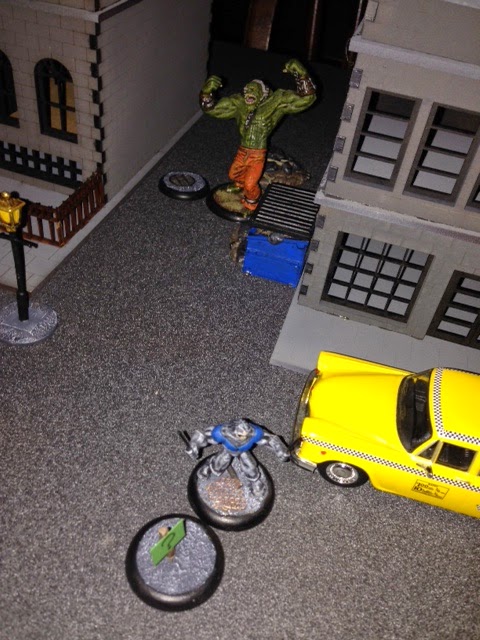 To add to Batman's worries, Killer Croc bursts out of the sewers with roar, perilously close to the frozen Nightwing. 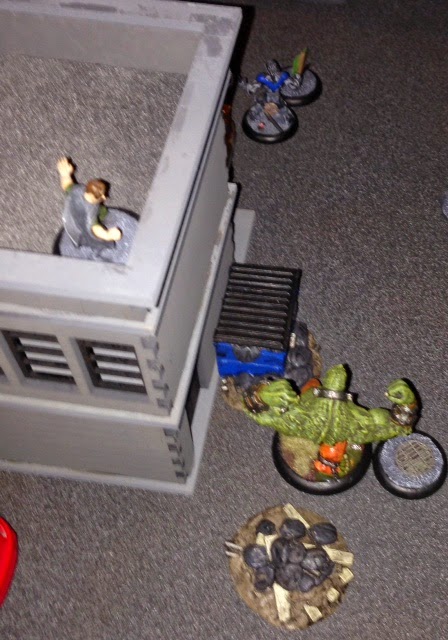 Realising the danger, Robin attempts to slow the beast down with a well thrown batarang. 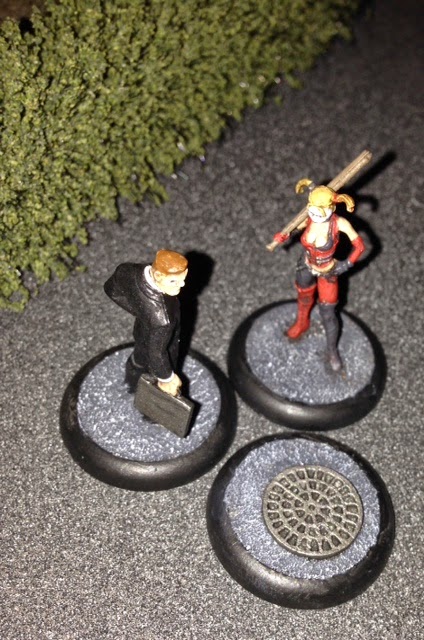 Meanwhile, Harley Quinn makes contact with the agent an collects the cash. After a shouted warning that Catwoman had been seen entering the sewers, she wedges the grate closest to her shut. (Whilst all this was happening, the Ringmaster had solved a riddle for 1vp - the current score is Harley 2, Batman) 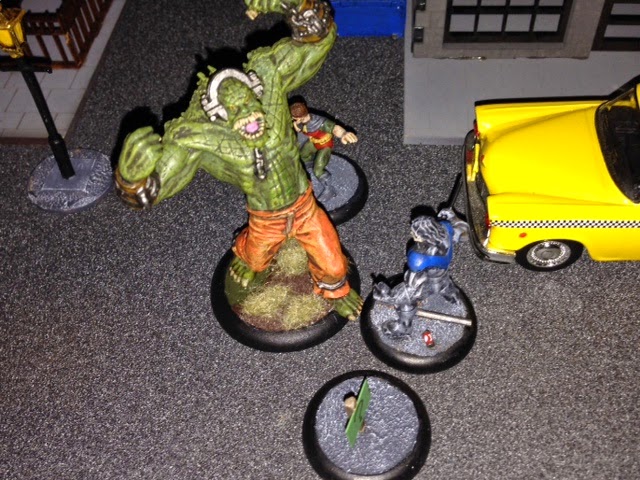 A bellowing Croc launches itself at Nightwing, who is able to defend himself at least a little as he'd managed to free himself from his ice prison, but is still severely injured. In return, he unleashes a storm of blows that almost fells the beast. Even the arrival of aid, in the form of Robin, can't quite bring down Croc. 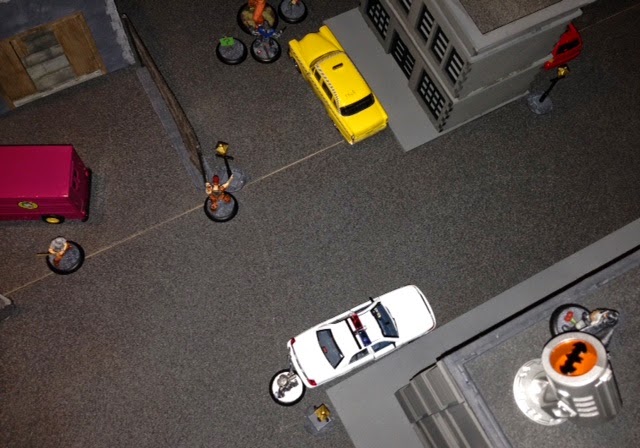 Batman again fails to do significant damage to Freeze and swings away to safety from the cold-hearted scientist's nefarious weaponry. He surveys the scene, realising that the heroes were in danger of being swamped whilst Catwoman remained trapped in the sewers. 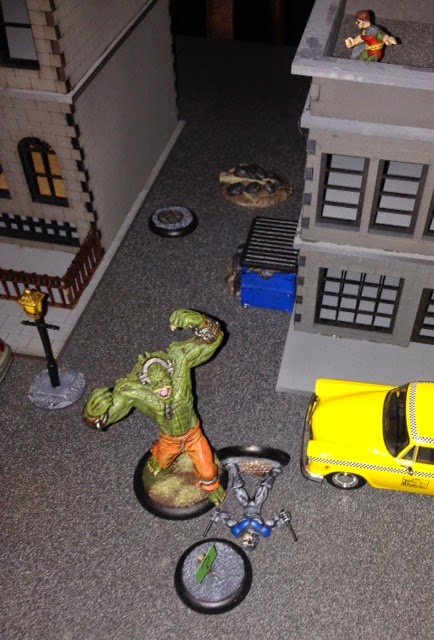 Croc smashes into Nightwing again, knocking him out and baring his teeth as if ready to devour the crimefighter. Robin again unleashes a flurry of blows, and realising that he his overmatched, swings away to safety, leaving 'Grayson' to his fate. 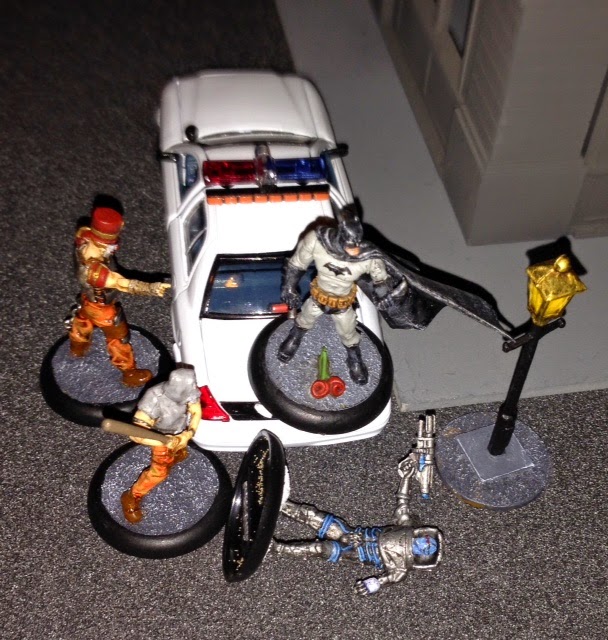 Meanwhile, Batman swings down at Freeze again, knocking him down, and is then set upon by a Harley's clowns. 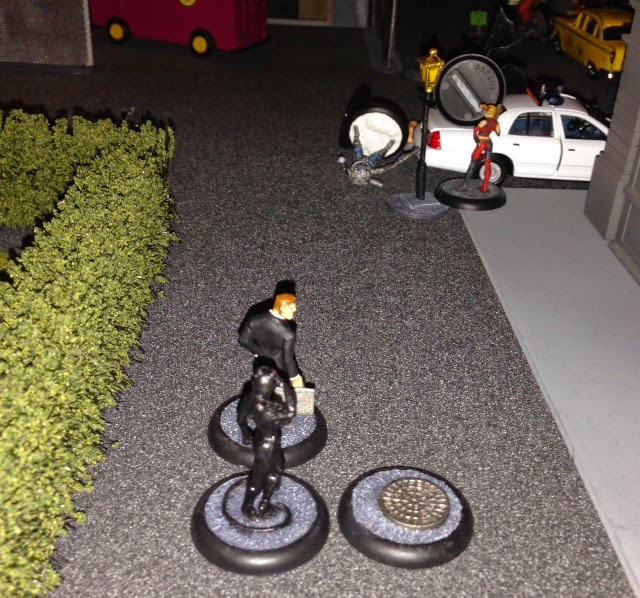 Harley herself, gets over-excited by the prospect of bringing the Bat back to Mr J and abandons both her post by the sewer and the loot she was carrying, allowing Catwoman to pop up and grab her prize. (I owned up to not paying the SC for moving with loot, so I suggested that Harley had dropped it rather than trying to take my move back) 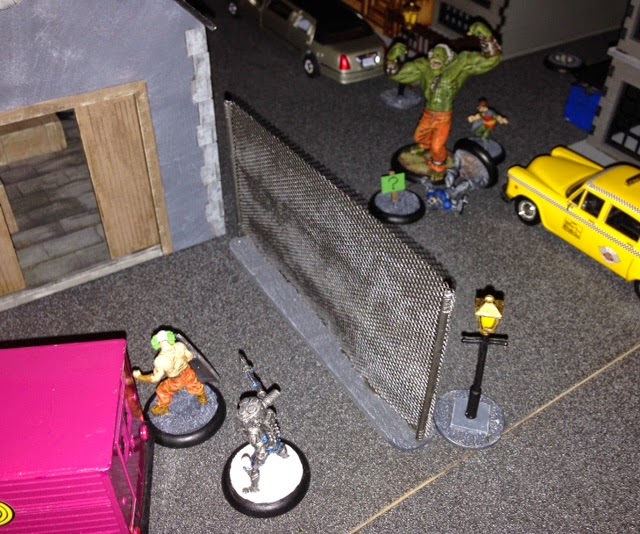 With the heroes all otherwise occupied, Freeze picks himself up and heads with a Clown towards a warehouse to  'loot' it. 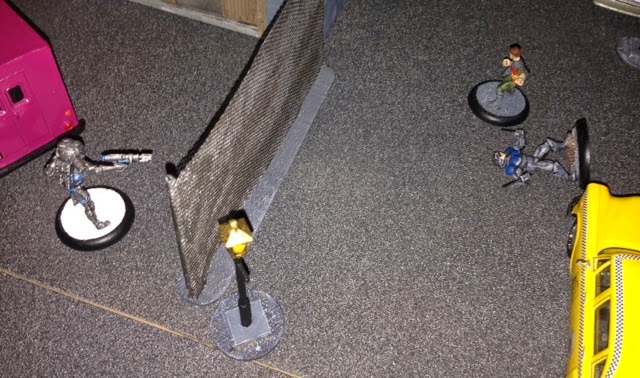 With the Clown able to secure the loot, Freeze takes a pot shot at Nightwing, taking him completely out of the fight whilst Croc makes a break for the alleys of Gotham. 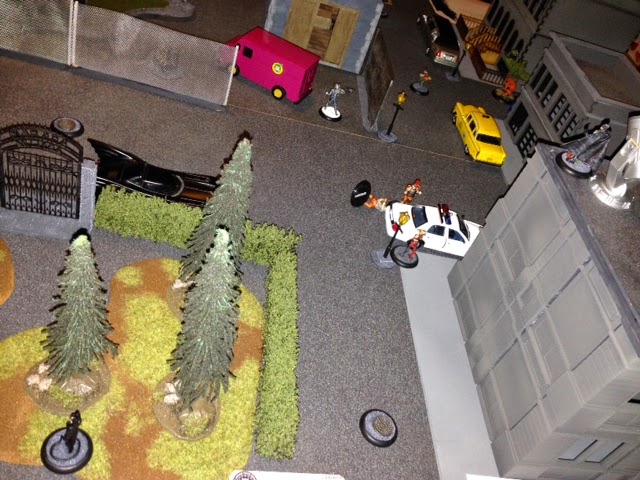 Batman returns to the rooftops and surveys the scene. Nightwing is down, the clowns are roaming the streets, Freeze and Croc are loose. Not a good night's work. At least Catwoman had made it to Arkham to prevent any more escapees getting out.

Overall this was a minor victory to the bad guys (me), by 10 vp's to 7. I think I might have got the turns wrong in the report, because I'm pretty sure Freeze was knocked out, not just knocked down. Pete picked up the game well, and could really have done with the ability to arrest my characters.

For me, I quite like this crew as it's quite direct. They do lack ranged ability but I will be taking them to the tournament; and the good news is that the rules have be changed to make it a 350 rep crew. Which means I can add Sniggering and his assault rifle. Heh heh...

Pete enjoyed the game and it looks like the Watchmen may be arriving in Gotham soon.
Posted by Kieron at 03:05