Zomtober 3 - Out Of Time

Not a very exciting post today as I've been somewhat busy with it being my daughter's birthday this week.

I've also been busy with some Batman bits (of which, more this week), so I've only done one survivor. 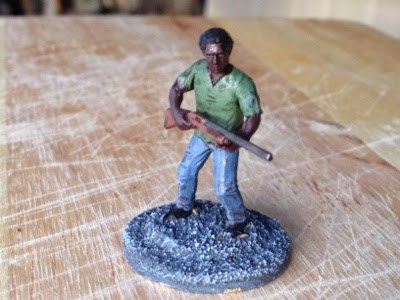 I'm not sure why, but I want to call this guy Bill. He's the first survivor model I've done which the name is not based on a tedious pop culture reference.

Now he packs a shotgun he took from an abandoned police cruiser and he's out on his own. Although he's lost everything, Bill has found that he's coping quite well with his new, out-of-the-ordinary, life.

The model is actually made from a Studio  Miniatures Z-Clips body, and the head and arms from the Wargames Factory make survivors sprue.

I promise to do more this week.